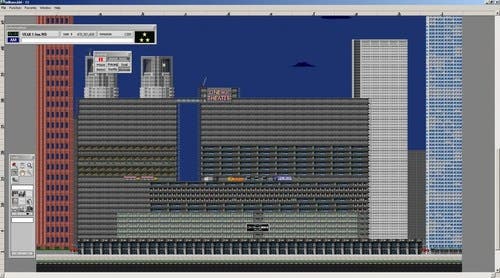 By SAVING CONTENT (@SavingContent)
Lights Off
5 Incredible
Retails for: $7.99
We Recommend: $6.50

First off, this is my first post on Saving Content. I’m Bill Rastello, a.k.a. WJR1985, a.k.a. bipp5. While I do play new games as much as everyone else, I tend to spend a lot of my time playing older (>5 years old) games. Because of that, there may be some odd blasts (or not-so-blasts) from the pasts coming about. Time for the review!

Ah, SimTower. My first memory of SimTower as a child was wondering why my Condominiums had people, then no longer had people anymore! I couldn’t fathom why people would want to leave my wonderful 30 story tower, which had only one elevator which was full most of the time. Now that I’m older, I understand why. The SimTower / Yoot Tower combo is a surprisingly detailed game about what the title says – building a skyscraper from scratch. There’s a surprising amount of depth, and once you look through some of the translation errors, a really fun game that will suck up most of your time. I will be mainly reviewing Yoot Tower since I no longer have my original SimTower copy, however most of these things can be applied to SimTower as well.

The game starts off simple enough – you have an open land, a few million dollars, and nothing but the sky. All towers start with a lobby, which immediately sucks up 3 stories of your tower. You’re well on your way! From this point on, it’s about a balance between building enough offices, condominiums, and apartments, as well as special buildings, to up your star rating. Depending on the level, there’s up to 4 star ratings you can achieve, with the “Tower” level being the final level. Each star level you hit opens up more buildings, more random events, and more challenges. Sounds easy enough, right?

Well, here’s where the problem hits. First off, money goes fast. It costs money to build and maintain floors, as well as for each specific element you build. Shops you build might not make any money at all, or they’ll make bank. It might rain on that day when you’re counting on income from that one shop, making it so less people show up, putting you in the red. Luckily, offices tend to be cash cows, and are a great place to start. Starting off your tower with some offices, with some restaurants in the basement (you can build under your tower, too!), and some bathrooms to make your tower-dwellers happy, you can easily start actually making money. Once you get the money flowing, building apartments and condos to get people to live at your wonderful tower, and building elevators along the way to shuttle your people along, you’ll hit…

The VIP visitor. VIP visitors are random people with silly names that come to your tower and review it – if they like it, you go up a star rating, and things get more complex! As long as you don’t have huge lines for your elevators, and you meet the population max, I’ve never seen a VIP visit fail before. It’s essentially just a nice touch to show that you’re going to be going up in star rating soon.

As time goes on, you’ll notice your people are getting angry in your tower. 95% of the time, it’s elevators. You may have heard Yoot Tower and SimTower called an elevator sim before and, well… that’s not too off base. As your tower grows, you’ll end up spending a significant amount of time managing your elevators. You eventually have 3 types of elevators to wrangle with, each one with their maximum floor limit, which makes it a wonderful complex chain of elevators that your dwellers need to take. Make this chain too inefficient, and your people will hate your tower and leave. Spend too much money on elevators and your budget will disappear. It’s a delicate balance that is tough to master.

You’ll continue to hit challenges along the way, like garbage piling up, lack of power, terrorists that hate your tower, and residents getting angry from people walking by too much and moving out, to name a few. Finally, you reach the top of your tower; nearing your 100th floor, you can place your topper – a stadium! Why anyone would play any sort of game on the 100th floor I’m not sure, but hey, it makes for a great top to the tower.

Throughout all of this craziness, I find myself continuing to play this game years after it’s released. If you’re a fan of management games, or micromanagement in general, this would be a good one to hunt down. It may be tough to find a copy for PC right now, but it was recently released for iPad, so those of you that have it can go that route.