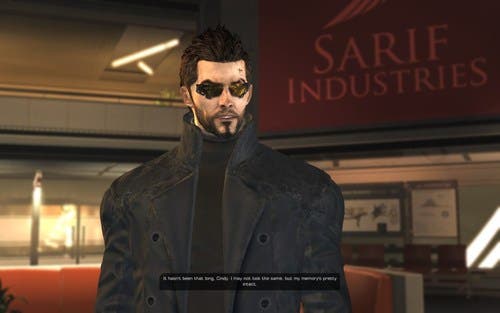 Deus Ex: Human Revolution is my introduction to the series. Back when the original Deus Ex came out in 2000, I was a little disillusioned with the death of the adventure game genre and the skyrocketing rise of First Person Shooters. It didn’t help that Deus Ex came out on the heels of one of the most disappointing first person games ever in Daikatana. Knowing what I know now about the original Deus Ex— that it was one of the first shooters that was more than a shooter— I definitely would have played Deus Ex. But heck, up to that point I hadn’t even played through Half-Life due to the same reasons. That being said, I do like what Deus Ex: Human Revolution brings to the table, but it’s not without its flaws.

The game is set in a futuristic world where technology exists for mankind to replace and augment various parts of their body. As is the case with your main character, some people are augmented out of necessity to stay alive, but others choose to be augmented. And there’s a constant debate in the public whether or not these augments should be regulated by the government. Augments aren’t perfect as they can cause drug addictions and other side effects, and society at large also fears change.

You play as Adam Jensen, an ex-cop who is now part of the Security team of Sarif Industries— one of the world’s leading makers of augments. There are many groups out there who wish ill to Sarif, both competitors and opposers to augments, so security is essential to Sarif in this world. Sarif suffers a terrorist attack, and in that attack, Jensen is gravely injured and needs to be augmented to stay alive. Almost your entire body ends up being augmented, but not all of your augments are turned on initially because the doctors who operated on you are afraid of that being too much for your body to handle. This also happens to be a convenient way to explain how you can level up your abilities throughout the game.

The game also has conversation trees. The conversations aren’t as in-depth as what you’d find in Mass Effect or Dragon Age though. But you do get chances to make decisions that affect the world through these conversation trees, and there are a few conversations where you need to say the right things to get a peaceful result. That being said, the dialog isn’t the greatest in this game and there’s a large disconnect at times between what a person is saying and how their animation is reacting. It also doesn’t help that the animations are quite repetitive during dialog scenes.

As you start off the game, you’re thrown into the hub world of Detroit. It’s a pseudo open-world, something that I’d compare to Batman: Arkham Asylum or the Citadel in Mass Effect rather than a true open world. You’re given missions, some which happen in the hub world, and others which happen in special levels within the city which you only visit for a short amount of time. You do travel to other places other than Detroit, but most of them do lack the pseudo open-world that the initial place you start off has.

The basic gameplay during the missions consists of sneaking through rooms littered with guards, or outright having gun fights with the guards to get to your objective. It’s your choice as to how you want to proceed. There are also cameras, motion detectors and locks that you have to avoid or be able to disable through hacking. You need to level up your hacking skill to hack higher level security systems though. So the way you level up influences your ability to play through the game in certain ways. There are also choices you can make in leveling up your character which will decide whether your character is better at stealth or combat.

The game also has a series of boss fights which feel completely different than the rest of the game, and unlike other parts of the game, the combat is unavoidable. So you’re at a severe disadvantage if you’ve spec’d out your character to be stealthy once you get into these boss fights. These fights are also often held in claustrophobic areas, so even if you wanted to try to be stealthy during a gunfight, that’s not an option. I actually had to drop down the difficulty once I encountered the first boss fight because my character just wasn’t good enough to stand up to the boss in combat at normal difficulty. The combat mechanics also start to break down in such a pressure situation. You’re constantly running out of your ability to sprint away from the enemy or you’re getting caught in reloading animations. I also found myself sticking to walls I didn’t want to (and I definitely was further away from than the wall I wanted to stick to) during combat. I also found the first boss to be cheap, as he’d grab me and get a free hit on me if I was within 5 feet of him, even if it didn’t look like he was in a position to grab me. Only through dropping the difficulty and making use of the save option was I able to make the boss fights bearable.

So the boss fights brought out both of my big problems with the game to the forefront. Firstly, you’re initially given the option to be stealthy, but as the game goes on, stealth just becomes a harder and harder option. Boss fights are just one of the areas where this shows. At some point, if you aren’t spec’d out to have high level cloaking and energy abilities, you cannot proceed through missions without getting into a gunfight. Midway through the game I had to abandon my stealth approach because of this and just stopped caring about being stealthy. While some prefer to play this way, I’d prefer not to, but had to do this out of necessity. My other big problem with the game is that the game is just too conservative with the abilities it allows you to have. Whether they should have started you out with better abilities and built on from there, or just had given more XP points, I’m not sure. But I did feel as though the fun was limited due to how conservative the game was with giving you abilities.

Visually, the game looks great. It’s a clean art style that’s reminiscent of Mass Effect, but has its own twist with its amber hues throughout the game. I also found it to run quite well on my PC comparatively to other modern games. The cutscenes however aren’t that great. Many of them are not done in-engine, which is strange because the in-engine graphics look quite good. They seem to be compressed to look okay on a console, but don’t necessarily look the greatest when you’re running in resolutions of 1080p or higher on PC. It also just breaks immersion because the visual style of the pre-rendered cutscenes is quite different than what you see in-game. Uncharted 2 and Mortal Kombat are games that did use pre-rendered cutscenes, but the visual style of those cutscenes were so close to the in-game graphics that many times you didn’t even notice the transition. That’s not the case here.

The pacing of the game was a little uneven to me. Midway through the game, the pace of the action starts to pick up, as if you’re reaching a conclusion, but then the game’s end sequence dragged on far too long for me.

I also had some technical problems with Steam & Steam Cloud which prevented me from finishing this game earlier. I had started playing on my laptop, but then had issues with Steam Cloud transferring the saves back to the computer I mainly use to play games. Manually copying the saved games over didn’t work for me either. Eventually I did get Steam to sync up the saved games by uninstalling and re-installing it, but I wouldn’t have known by looking at the in-game menus as they were telling me the saved games were much older than they actually were. The game also didn’t always launch for me, and required me to restart Steam or my PC at times. In-game menus also seemed to suffer from some issues. Sometimes my mouse would be unresponsive and I was forced to use the keyboard to navigate menus and save the game.

I’m glad that Deus Ex: Human Revolution exists, and it’s worth checking out if you want something more in-depth than a straight out shooter. It does some interesting things that other RPG’s and Shooters don’t do, but it’s not polished up to the level that I’d like to see. It’s a good rebirth for the Deus Ex franchise however, and I look forward to what the next installment brings.