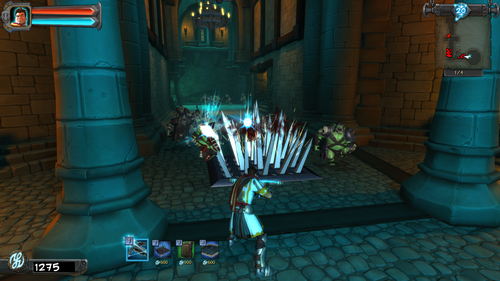 Orcs Must Die! is not just the title of Robot Entertainment’s latest XBLA game, it’s the War Mage’s way of life.

Rifts have been opened that bring Orcs from their world to ours, but it’s up to the War Mages to stop it. The elder War Mage is teaching a naive, fresh-faced War Mage, who is the last of the Order. As the elder War Mage is overwhelmed by Orcs, the young man has to repel the Orc invasion and not let them get through the Rifts. You play as the last War Mage, inexperienced and not taking this threat to human life seriously. And why should he? The game is cartoony, light-hearted, fun, and full of attitude.

The first level drops you in with little-to-no tutorial, which is fine. Each level starts you out this way, allowing you to learn the path (with small light paths showing you where the Orcs will travel), where you will place your traps, and where the powerful choke-points are. With the no-time limit in the “building phase”, you can also spend time looking at what type of enemies will break through the door. This will allow you to pick your weapons and traps accordingly.

To stop the Orcs, you can do it in two ways: One way is to use yourself as a repellant. You have two main weapons to use at first; a Crossbow and Sword called the Bladestaff. Crossbow can shoot rapidly, however the faster you shoot the more scattered your shots become. You can zoom in for precise shots and get headshots. There is an alt-fire for an area-of-effect stun. The Bladestaff is melee only, but the length of the sword gives you a good distance without getting too close. It too has an alt-attack which is a wave knockback. Combine the crossbow’s stun with the bladestaff’s attack for devastating attacks to the larger enemies. Over time you’ll get access to other weapons, but they use mana: wind bracers to throw orcs off ledges or fire bracers to throw fireballs to give over-time damage.

The other way is to use Traps, or defenses to slow or completely stop the Orc horde. You’ll start off with some simple traps like Spike Traps and Tar Traps, but over time will gain access to Spring Pads, Exploding Barrels, Barricades, and Crusher Traps that like a meat hammer, crush your opponents into giblets. Luckily you can lay down traps in any way you see fit, as they will not harm you when you cross over them. Weapon and Trap slots increase with each level up to 10 slots. So you will have to decide between using a Wall Shredder or a Barricade should it come down to it.

Before you start each level, you can choose your difficulty: Apprentice, War Mage, and Nightmare. Nightmare is locked out immediately as it requires you beat the game on War Mage first. There are 24 levels total in the Campaign. Once you’ve learned the lay of the land, picked your weapons, and placed your traps, press the Back button to “Release the Horde!” and 5 to 13 waves of enemies will bust through the wooden door and make their way to the Rift portals. When everyone for the location has been extinguished, you are scored on your performance including: time to completion, bonus multipliers, and how many enemies got through, and much more. This score equates to a skull rating which is the game’s other currency to buy upgrades to your weapons before missions.

There’s also several types of upgrades. As I mentioned, there’s upgrades to your weapons and traps before starting a level. Once in-game you’ll eventually gain access to cards that can upgrade the player’s abilities such as speed and strength, or the player’s weapons such as enhancements (for only that level) to the crossbow and sword, or to the strength and power of the traps. I say or because you can only choose of the three, so choose wisely.

The art style is fantastic, and while environments tend to repeat and have different layouts, almost feel as though they’re taking place in different areas of one castle or dungeon. There probably isn’t much that could be done for that, because the time of day being set at dusk/night sets an incredibly moody atmosphere that absolutely fits the game. The range of colors is beautiful, and they really accentuate blues and oranges to a great degree. Moving your character is smooth and quick. The game almost never drops frames during the heat of battle with traps, particle effects, orcs, and weapons firing until about the last two levels. It’s an incredible site and gets tense in a way you’re not used to.

Orcs Must Die! can be compared to a medieval/fantasy akin to Trenched by Double Fine. However, they play a lot different and Robot Entertainment has put a lot of time into the different types of weapons, traps, and fellow warriors you can summon to fight the onslaught. No multiplayer co-op exists, whether online or off. That doesn’t make this a bad game, though. They put their focus into a good place. There’s only one mode, the Campaign. While other modes would be great, the replayability and score chasing between friends on the leaderboard is more than enough to come back, especially when the Career Kills counter on the main screen taunts you to get more and more kills. Orcs Must Die! and it is suggested you help.