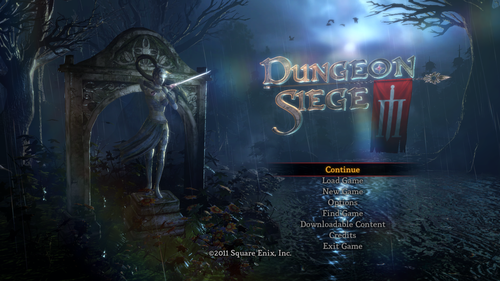 Editor’s Note: This is not a late review per se. We were provided a review copy of base game for the recent DLC release – Treasures of the Sun, which will be posted later today.

It’s been 30 years since the events of Dungeon Siege II and the threat still exists where Jeyne Kassynder has taken control and nearly obliterated the Legion. Upon starting the game you are introduced to these events and asked to pick one of four characters: Lucas a Legion fighter, Anjali the sorceress of fire, Katarina a ranged type, and Reinhart the necromancer caster type. There’s no customization here, you pick a character and play them as-is. I for one, applaud this as it minimizes time spent in the menu and more diving in on the action and the story presented to each of the characters.

Quest structure is pretty straight forward. You’re given a main quest to fulfill with no impending time limit despite the urgency of the story. But as you make your way around the world, you interact with commonfolk that often ask the a lot of you, such as going into a cave filled to the brim with monsters so that you can rescue her husband from an early fate or retrieving an heirloom lost in the forest, which has now been overrun with spiders. The sidequests are completely optional and can be declined. Once accepted, they stay on your log for good. Overall, everything’s a bit linear as far as direction of the story and the pathways you take to get to quest locations. Exploration is not really an element of this game as it was previously in the series. But breadcrumbs a la Fable can help lead the way if you get turned around or going in the wrong direction by pressing up on the d-pad.

Speaking of spiders, I sure hope no one has arachnophobia – as they are many, many spiders to kill. This may even help you get over that fear.

After you’ve completed some side quests and main story quests, you’ll level up – gaining some new abilities to spend points in. First off is Abilities, these are rank specific and grant special powers mapped to a face button for one-handed, two-handed, and defensive stances. Next up are Proficiencies, where you boost an Ability that is mapped to a face button such as Shield Pummel or Blade Dash for Lucas. Lastly, you pick a Talent. Talents increase random occurences of bonuses and chances based on your level and points put into them. Nothing you haven’t seen before, but can be daunting to new players.

Loot is a driving force in many action RPG’s. Here, it’s a bit subdued. I did often find myself opening the Equip menu after picking up loot from a chest or a dead body to find out it’s stats and see if it was better than what I had. There’s nothing really aesthetically different between weapons and armor, but the stats they carry are important – making it a numbers game and not about how cool your character ends up looking. An odd thing is equipping helms, but they never appear on the body of your character.

I’d have to say that the PC version of the game (which is the version I played) is the best version to get, though it does not play well under traditional keyboard and mouse controls. You can do some customization but it just doesn’t do enough to please you. My playthrough consisted of playing with a wired Xbox 360 controller which worked wonderfully as the controls were re-mapped to look like 360 buttons. The PC purists might be upset at this suggestion, but it’s simply more enjoyable this way.

Graphics are remarkable, dramatically shifting from place to place giving a different color palette and lighting to makes things new and unique. Everything is interconnected as you don’t have a load screen from one area to the next, but the forests you travel get more and more dense hiding the sunlight or entering dark and damp caves will produce eerie locations that are stark contrasts from one another that are only lit by torches hanging on the walls.

For an RPG, Dungeon Siege III is short by comparison to others of its kind – seeming to feel like a bite-sized adventure overall. Taking roughly 10-12 hours to complete depending on difficulty. There’s a bit of replayability with the multiple characters though, even though story elements will always play out the same way. Changing how you dispatch your foes with different characters is interesting enough, as well as ratcheting up the difficulty. However if you’re not the type to go back into a game after the credits roll – a new character may not be enough for you.

Another issue that can’t be avoided is, talking about the Multiplayer. While it achieves this old-school going over to your friend’s house kind of feel, it proves to be very frustrating. If you want to play online, you can host a game for others to join and they will assume the role of one of the three remaining characters at your level, and help you in your questing. However, if you want to join someone else’s game, you’ll have to do the same – the caveat being, you don’t retain anything from your time: no gold, no experience – no thanks. Luckily the single-player AI is helpful enough to resurrect you if you should fall, but if you want to play with friends, you’ll have to make a sacrifice.

In the end, Dungeon Siege III is game that’s worth your time if you’re willing to look past the multiplayer misstep – you’re bound to have a good time. It’s a bit hard of a sell this late in the year with RPGs now out. If it wasn’t called Dungeon Siege III, it might have been better received by others – but for me its a fine game that doesn’t overstay it’s welcome and provides and entertainment beginning to end. It does feel marred due the changes Obsidian made. But if you’ve never played a Dungeon Siege game before, this is a great place to jump in and find worthwhile combat and challenge.