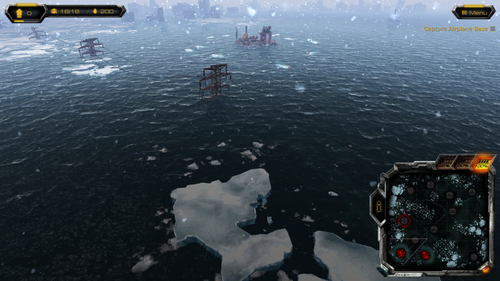 Unigine is behind one of the leading Benchmark Test Tools used for PC gamers to gauge their PC’s performance. Now they have created a playable game based off their engine. They aren’t the first to do this as Futuremark branched out with their multiplayer shooter Shattered Horizon and recently with a tower defense game, Unstoppable Gorg. Do they have what it takes to make things look and play beautiful?

I’ll admit, my first impressions of the game were dismal due to some early bugs that either froze the menus or wouldn’t load anything beyond Mission 1. Suffice to say, those issues are now of the past and a new impression has been formed. The team is quick to find and resolve the issues and I couldn’t be happier with the turnaround time of a fully working version of the game to review.

Oil Rush’s gameplay isn’t all that unique, but blends the real-time strategy with tower defense. It’s an interesting mix that keeps you alert at all times. Each mission has almost no down time, which is good from the pacing perspective, but not for your heart as the game never lets it rest. Along your playthrough, as you capture Oil stations and take over factories that produce units, you’ll earn Oil that you can use to spend on building defenses for your towers and can use AA guns for aerial units, or machine guns for water (land if you will) attacks. You can then upgrade each defense as you get more oil. Each rig has 5 slots for defensive weapons. You’ll also earn points towards your skill tree that can improve Unit Defense, Speed, and Weapon power. Or you can invest in Radar to reveal enemy position and strength at any given point on the map. The small list of active powers you can use work to your benefit and you get them reasonably often that you shouldn’t hesitate on using them.

The world has waged World War III using thermonuclear weapons, melted the ice caps and created the story line of Waterworld, sans Kevin Costner and the late Dennis Hopper. You see, as the Earth is now all water – boats are the weapons and the housing for all life, fueled by oil and it’s up to you to command groups to take back oil from the pirates for your own gains. Characters you engage with in the comic stills are weak in the voice acting and it’s almost hard to distinguish if you’re even on the right team. Through it all you are aided by a computer, who suspiciously sounds like GlaDOS from the Portal games.  Now whether this is on-purpose or not, it’s hard not to think of the other game when you hear it.

You’ll find the Campaign a bit lacking, even an excruciating escort mission thrown in – which is why I dropped down the difficulty from Normal to Easy to complete, I couldn’t imagine that level on Hard. Though it’ll give you a good tutorial of showing you how to manage your units and when to build up your defensive towers, it just isn’t very exciting or engaging. If Campaigns aren’t for you, there’s Quick Play to jump straight into the action without any story in which you can use any of the multiplayer maps to engage enemies and use various strategies. Lastly is the multiplayer, which at every point I played the game during review – was nonexistent. I’m not sure if it’s broken, enough people haven’t bought the game, or if people simply don’t want to play online – but already the longevity is not in the multiplayer.

It goes without saying that if you’ve used Unigine’s benchmark program Heaven – it looks stunning, and could be mistaken for just a benchmark, it’s definitely more than that. It’s a fully playable game that’s a bit light on the features but functions well and sadly the community isn’t there, but maybe over time it’ll grow – the community itself or on you. I’ll likely go back for some skirmishes against the AI. It’s a good start for Unigine to play something tangible, but maybe they missed the boat.