Imagine a city where all the traffic routes to get cars safely across town had to be planned in advance. This is the concept of the delightfully clever new puzzle game, Traffic Wonder, from independent developer Yo Ambulante. Soon available for iOS devices and all major brands of touchscreen tablets, Traffic Wonder features 60 fun levels to challenge players to guide cars to their home garages while conserving fuel and picking up bonus items for maximum points.

The game concept is simple: route color-coded vehicles to their respective destinations without crashing or running out of fuel. But this gameplay mechanism quickly expands into brain-twisting logic puzzles as more cars, traffic, and routes are added. Players trace routes from point to point using a sweep of the finger. Fuel is a limited resource, so players must find the most efficient routes possible. Once the routes are happily defined, a push of the play button sets the journeys in motion.

The vehicles in Traffic Wonder behave realistically; speeding up and slowing down for straightaways and tight turns. In addition, different vehicle classes such as cars and vans run at different speeds, making route-planning more challenging—especially when computer-controlled cars are added to complicate matters. Detours to let faster cars to overtake are often necessary—but deviate too far from the optimum route and risk running out of fuel.

When in motion, Traffic Wonder veers between old-school toy set and edge-of-the-seat puzzler. As the vehicles head determinedly towards their destination, a slight dip in speed round a corner could mean the difference between success and failure. The slightest fender bender requires a rethink—which the game’s interface makes a joy rather than hassle. Routes can be remapped with a few taps and special stop signs—which come in a limited supply and must be carefully rationed—can be placed to slow player vehicles.

Traffic Wonder combines wonderful puzzle mechanics, picturesque visuals, and a subtle yet important environmental message. The game is headed to all major mobile and tablet devices in the coming weeks. For more information, visit trafficwonderapp.com. 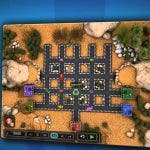