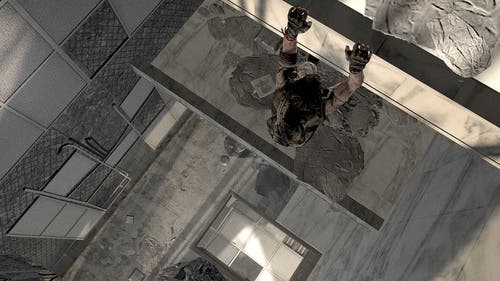 I Am Alive Review

It’s been one year since “the event” occurred and you’ve finally made the trek across the country to see your family again. The game begins with an unknown woman watching a video from a handheld camcorder. What she sees is our hero explaining his situation by making a video diary of his adventure, his adventure back to the fictional city of Haventon. The mission: Find his wife and daughter.

The game’s cutscenes tell its story through the eyes of the camcorder so get used to the grey tones and white noise. The game purposely lacks variety in color as everything is washed out and dull; but know that it’s appropriate for the atmosphere the game is conveying. The lack of color helps define what a wasteland Haventon has become. It’s actually pretty depressing walking around the streets of grey with no signs of life. It is quite the sight when you’re on top of a building looking at the city below covered in dust and sunlight. It’s hard to imagine that this is a downloadable game with the sheer scale and size, everything looks incredible. To drive home the point of an empty city, the only time music plays is when you get low on stamina, and only then it’s used to build tension. It’s well done and makes getting to a spot to rest feel that much more important. The voice acting isn’t going to win any awards, but it feels natural and is believable. That’s all that it needs to be.

The mechanics are fairly easy to understand. While walking out in the fog you gradually lose stamina, a necessity resource in this game. It isn’t so much a big deal on the streets but when climbing you need as much as you can keep. Climbing eats up your stamina at a much faster rate and if you try to jump while climbing, say goodbye to a huge chunk of your bar. If you find yourself with no stamina, you enter slow motion where you rapidly tap the right trigger to perform a desperate, but extreme effort to finish your climbing. Doing this will keep you going for a short while longer but you depletes your stamina capacity. Once that’s gone, you become a pale street pancake. There are items you find throughout your game that will replenish health, stamina, and stamina capacity. Word to the wise though, manage your items well. You never know, a single can of soda might be the difference between death and survival.

I’m telling you right now, you cannot go through this game without excellent management of your stamina either; failure to do so will use up a retry. Retries can be found throughout Haventon and by rescuing survivors. In Normal difficulties you will always have three or more retries after an episode. In Survivor you can only gain retries by finding and/or earning them. The game isn’t all that difficult but even on Normal I found myself burning through retries and having to start back at the most recent save, which sometimes put me back at a frustrating spot to do all over again.

The times I ended up using the most retries wasn’t with the climbing, it was during the fights. When you encounter enemies, most wont attack right away – they will just walk up to you. Here you have two options: Stealth kill with your machete or shoot your gun/bow. Where it becomes tricky is when you have five enemies and they have knives and guns; this is where bluffing comes into play. The bluff mechanic works like this, when you come across an enemy you can pull out your gun and depending on the temperament of the baddie, they will either throw their hands up or come headstrong at you. Once they throw their hands up, you have now turned your five vs one fight into a strategic puzzle. Find the tough guys first and get rid of them so that the cowardly ones just surrender. I isolated the guys with the gun, getting rid of them first since they will shoot you if you pull out any weapon. Trust me when I say don’t get shot, there is no regenerating health and one shot will deplete your health bar, two shots kill you. After their demise it was all about keeping the other enemies back by pointing the gun at them. After getting the bow I could bow kill an enemy then swap to my gun to hold back the others while I retrieved my arrow, then just rinse and repeat.

The bow is my favorite, it’s deadly, silent, and has reusable ammo. There’s a stealthy part in the game where you are limited to bow use at first and I really enjoyed having to be quiet hunting these people. Although I’m not quite sure what that says about my character, you know, enjoying the hunt for the most dangerous game and all. Regardless, I ended up finishing that whole section with only the bow and two arrows; oh and nine bullets.

I enjoyed this game quite a lot but it isn’t without it’s flaws. While climbing I found it excessively frustrating when trying to climb up a pipe resulted in my character continuing to climb either left or right. When you have to deal with a rapidly decreasing bar, small errors like this can cost you big. Another gripe I had was trying to rapidly press the right trigger for extreme effort. Maybe it’s just me but having to rapidly press spring loaded triggers doesn’t feel comfortable or very effective. Moving the button presses to a face button would have felt more at home. Finally, there just doesn’t feel like there is much replay value here. The option to play through a second time on Survival for increased difficulty and challenge – but after that, really all you have are the achievements and those aren’t too terribly hard to acquire. They do have the leaderboard to get competitive with friends so try to get a better score. But playing the whole game again for a better score just seems tedious to me. Maybe if they had select climbing sections or fights that you could compete for the fastest time, maybe that could have extended the life just a little bit longer to get a just a little more out of that $15.

I ended up finishing the game in six hours and some change with a 90% score. At the time of me finishing the game, I placed 20th out of 360 players worldwide. So go see if you can do better than me, I’m sure I won’t be there for long. I’m a fighter, I’m a survivor. With the size and scale of this game, it is worthy of your 15 dollars. Fun and engaging but don’t expect to do much with it after the credits are done rolling.