Traffic Wonder now out for iOS and Android with an introductory price of $0.99

The delightfully clever puzzle game, Traffic Wonder, in which players map all the traffic routes to get cars safely across town, is now available for all major brands of touchscreen mobile devices and tablets. Created by independent developer Yo Ambulante, Traffic Wonder challenges players to guide cars to their home garages without crashing—and while conserving fuel and picking up bonus items for maximum points. The innovative game is available for an introductory price of just US$0.99 on iPad, iPhone/iPod touch, Kindle Fire, Android, and BlackBerry PlayBook.

The game concept is simple: route color-coded vehicles to their respective destinations without crashing or running out of fuel. But this gameplay mechanism quickly expands into brain-twisting logic puzzles as more cars, traffic, and routes are added. Players trace routes from starting point to garage with a sweep of the finger. Fuel is a limited resource, so players must find the most efficient routes possible. Once the routes are set, a push of the play button sets the journeys in motion.

“Traffic Wonder was created to stimulate your brain with the slide of your finger while tickling your fancy as you meet the fun challenge of mapping out strategic routes using the least amount of fuel,” said game developer Alex Nino of Yo Ambulante. “There’s an immersive balance between finding the most efficient routes to maximize fuel, avoiding any collisions, and picking up bonus items for more points and rewards.”

The vehicles in Traffic Wonder behave realistically—speeding up on long straights, and slowing down to take tight turns. In addition, different vehicle classes such as cars and vans will run at different speeds, making route-planning more challenging—and it only gets more complicated when computer-controlled cars are added to the mix.

As in real life, fuel is a precious resource, and players are encouraged and rewarded for using as little as possible. Players will see the effect of different routes on fuel consumption, with elegantly efficient solutions rewarded with in-game medals. The game balances the risk and reward of going for more points or forgoing goodies to save fuel.

The app features graphics reminiscent of an old-school toy set. When the cars are launched in motion, players will be caught between marvelling at the feeling of playing with toy cars and the tension of seeing if their well-laid plans will come to fruition or send them back to the drawing board. The slightest fender bender requires a rethink—which the game’s interface makes a joy rather than hassle. Routes can be remapped with a few taps and special stop signs—which come in a limited supply and must be carefully rationed—can be placed to slow player vehicles.

Traffic Wonder combines wonderful puzzle mechanics, picturesque visuals, and a subtle yet important environmental message. With 60 levels available in the initial release, it’s already a comprehensive experience and more levels are planned in subsequent updates. Players are also encouraged to replay previous stages in order to save previous fuel and rise up the global leaderboards. 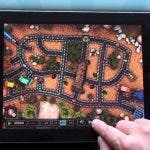 traffic wonder now out for ios a