NVision, the next generation content tablet app featuring the hottest gaming, entertainment, and tech editorial, is now live in the Android app store. A free download for Tegra-powered Android tablets, NVision highlights Android and PC gaming, movies, gadgets, and technology with an eye for the most exciting and groundbreaking graphics. Updated daily with high-def visuals, video, and in-depth stories, NVision covers the spectrum of visual entertainment from the newest games and effects-driven movies to the hottest gadgets and visual technology.

NVision’s innovative content is overseen by Will Tuttle, a ten-year video game industry veteran who was previously Editor-in-Chief at GameSpy.com and TeamXbox.com. The app’s gaming coverage is unique, bringing together insider perspectives and in-depth analysis of developer technology and techniques to reveal the art and science behind the hottest games on Android, PC and console. NVision also sorts through the over 450,000 Android apps to pick the best apps every week, with direct download links for seamless access.

On the tech front, NVision takes readers to the forefront of visual technology—from blazing graphics processors to 3D monitors and in-car entertainment—for in-depth coverage of tomorrow’s tech today. For movie fans, NVision reveals the secrets behind dazzling special effects and covers the latest movie scoops while bringing the biggest stories in entertainment to tablets. The app’s gadget section previews the coolest new devices on the market—from tablets to the latest phones and smart TVs—to give readers all the info they need to make the right choice.

“NVision is quite unlike any other digital entertainment and technology publication in print or on the web,” said Will Tuttle, Editor-in-Chief for NVision. “With a sharp focus on the visuals and industry-leading technology that drive modern games and films, all your favorite content is wrapped into a single app that uses the full capability of Tegra-powered Android tablets to showcase a superlative presentation with slick graphics, insightful editorial content, rich video, and interactive links to take you directly to apps.”

NVision’s content at launch includes a feature on what gamers can expect from Ubisoft’s upcoming Assassin’s Creed III, a look at some previously unreleased character renders from Blizzard’s highly-anticipated action-RPG Diablo III, and a head-to-head breakdown of the differences between Google Play and Amazon AppStore. On the film front, the app will serve up an analysis of why fans are worried about Michael Bay’s upcoming Teenage Mutant Ninja Turtles reboot, as well as a chat with John Carter director Andrew Stanton about the future of 3D movies. Gadget fans can discover the recently announced Google glasses, get first-impressions of a new gaming tablet, and learn how to connect their Xbox or PS3 controllers to their Android device. Android newcomers can get to know Ice Cream Sandwich, learn how to control their home with their tablet, and discover the most essential apps with NVision’s weekly must-read roundup. 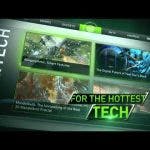 Though an independent editorial voice, NVision is platinum sponsored by graphics chip leader NVIDIA and is heavily featured within NIVIDIA’s Tegra Zone app, which is pre-installed on Tegra devices. This high profile exposure in conjunction with strong promotion and marketing by NVIDIA will bring the app to an estimated two million tablet users by the end of 2012. NVision is optimized for Tegra-powered Android devices, including the Samsung Galaxy Tab 10.1, Motorola Xoom, Sony S1, ASUS Eee Pad Transformer & Transformer Prime, Acer Iconia A100, Acer A500 and the Sharp A01SH.