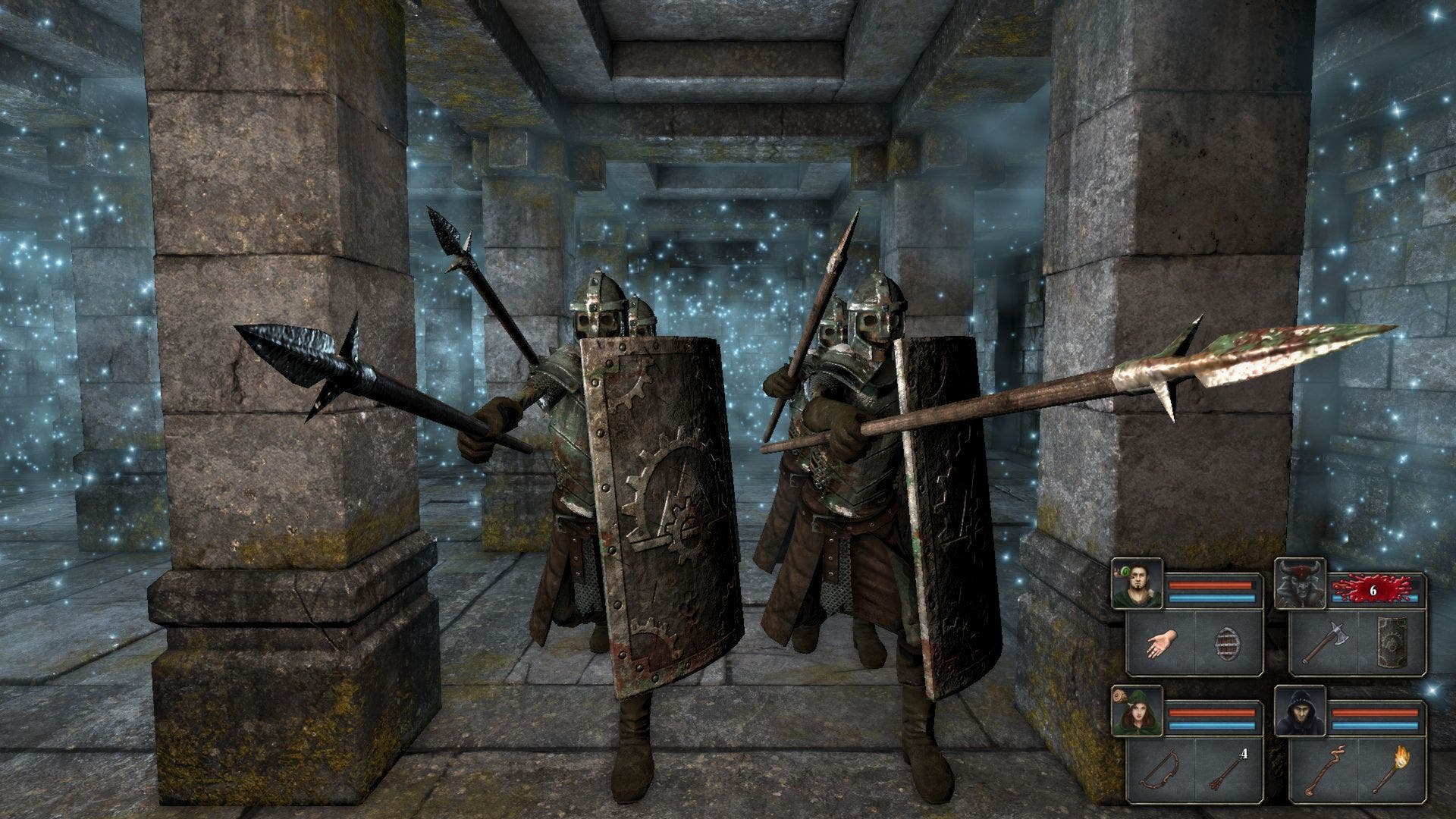 Flying your airship near Mount Grimrock, it begins to lose power and crashes, thus getting you and your crew wrongfully imprisoned – for some inexplicable reason. And by imprisoned, I mean chained together and kicked into a dark hole. Mount Grimrock’s prison is like Alcatraz. Once you are imprisoned, you are not supposed to get out. And the monsters that inhabit the dungeon of Grimrock do not want you to leave either, posing to be stiff competition for you and your band of fugitives. But quickly you escape and are left to your own devices. A plethora of options are available at the start of your game. You can go completely hardcore by disabling an auto-generating map to help you find your way or set the difficulty to Hard. The developers included an onscreen arrow system at the request of a disabled gamer who could not use a keyboard efficiently, only a mouse. Which, is one of the control styles that games had in Lands of Lore or Dungeon Master. Once that’s done you can design your own shackled crew of 4 with mixing humans, minotaurs, lizardmen, insectoids, etc. Thus allowing a unique party with their own names and professions. Or if you don’t want any of that, let the game’s default band of misfits be chosen for you. Controls are simple enough, but completely rebindable if you do not like them. With the game being tile based, as if on a tabletop board – the controls might get a few minutes for you to get adjusted. Right-clicking the equipped weapon to perform the desired attack.

It would be very difficult to create unique looking areas for each level of the dungeon as you went deeper. Though, the textures and rendering that occurs looks absolutely stunning and runs great with no hiccups or noticeable bugs. According to FRAPS, I was achieving 150 fps during play of the game. The environment itself appears damp with stones covered with moss and tree roots growing around them. The dungeons are dimly lit, only through torches guiding your way in the darkness – in which you can pick up for party members to carry for mobile lighting. But you you will find progression about halfway through as you see pillars of light from the surface and stronger bits of concrete as if many have not gone through as far as you have. Overall, it is very ominous with the ambient noises of nearby monsters and sound effects that creep in on you keeping you on edge at all times. Inventory and party management are essential to success as well as navigating during combat. You must maintain health items amongst party members because over time their exertion in combat will make them hungry. And eating food from fallen enemies is the only way to stay alive. Food is necessary, but to restore health and energy you can either rely on the game’s Rest mechanic or use health potions hopefully crafted by your party’s mage. But heed my warning, only rest in a recently cleared area or during your slumber you will be disturbed as you’re being attacked by some roaming monster. During resting, you will be randomly contacted in a shared dream amongst your party members. It’s cryptic and full of mystery, haunting you and urging you to progress further. With each new thread unraveled every floor.

The game is full of anecdotes to tell, such as the time I lured snails to a trap door, yielding no XP for me and my party – but giving me a Grinch-like smile from ear to ear as I tricked these foes into a trap. Or perhaps the time I walked into a room, stepped on a pressure plate that locked me into a room and was assaulted by enemies from all angles. Retrying the scenario, I threw a rock onto the pressure plate, having the gate close in our face and then able to kill them one by one. These scenarios happen quite often, and are almost essential to your success and to reduce casualties and maintain inventory. Close a gate on an enemy, rest, and resume combat to your advantage. This doesn’t make the game easy as you will not always have a safe haven to retreat to or a way to outsmart the enemy.

In addition to discovery, combat, and unravelling mysteries – there are cleverly done puzzles that you must overcome that yield treasures or secrets to aid in your adventure. You will find yourself dodging pikemen, snails, crabs, mushroom creatures, and ogres. Resorting to the above “get a door between the enemy and you” tactic is viable. It’s the most successful type when dealing with swarms of enemies that sometimes spawn all around you. The dungeons of Mount Grimrock are handcrafted and specifically designed to accommodate the puzzles. So, subsequent playthroughs will be the same, as far as layout goes. But being able to mix n match different party types will prove to be interesting. Legend of Grimrock is fantastic reboot of a long-dead style of PC games. Almost Human Ltd. has created a modern classic with this one, and nailed it out of the park, “for an indie game”. It’s smart, devious, and always rewarding to play. I always found myself pausing the game in celebration for tricking an enemy into a trap or by uncovering one of the game’s many secrets. For the money, you get a lot of value for the time you’ll end up investing, which could reach near 20 hours. The game is not dynamic, so subsequent playthroughs will be roughly the same, but being able to go in without a map and/or a harder difficulty can give you that little extra challenge. You’ll likely not find a better RPG of this style anywhere else.

A Steam and GOG code for the game was provided by Almost Human Ltd. and GOG.com for Review purposes