Last week at Namco’s Gamer’s Day, Paramount Pictures showed off a brand new trailer of the upcoming Star Trek videogame. Star Trek is reportedly coming out in early next year for Xbox 360, PlayStation 3 and PC.

Not much is known about the game, but in the initial trailer, it looks fantastic. Lots of running and shooting in the third person. Some big jumping sections. Made by Digital Extremes, who just came off of releasing The Darkness II. So we’ll see where it goes and see it for yourself…

You’ll also find pieces of concept art providing a fantastic look at what will surely be a top game of 2013. 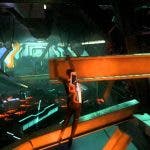