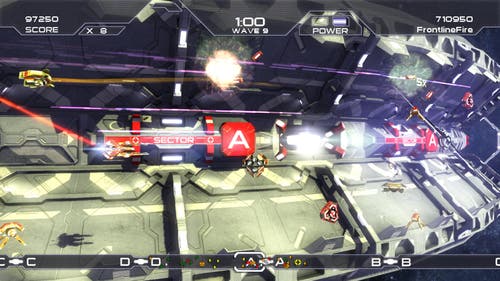 Orbitron: Revolution is an interesting entry into the shoot’em up genre, or shmup. There’s no fluff of a story or anything, which to some can be it’s detriment as it’s a lack of content or something that just gets in the way of gameplay. For me, it’s the latter. What you’ll get is a focus on a gradual ramping of difficulty and enjoyment of your time.

You get three modes in Orbitron: Countdown, Guardian, and Extra. Countdown is a mode in which time is ticking down from three minutes and you must score as many points as you can before time is up, by getting combos and using the level effectively to maximize your score. Guardian is a protective mission-type in which the four gates are being attacked and you must protect them all or lose the fight. Lastly is Extra, a survival mode in which hordes of enemies teleport in and you must destroy for points as well as not get hit even once, or the game is over.

The level layout is Orbitron is not like many shmups right now. You are confined onto the orbital plane of the space station and must defend it from the attackers in each mode. It’s really neat to see the edges of space as you go around the platform. With it, there are speed gates that propel you from A, B, C, and D gates expediently so you can keep the enemies at bay. Being able to know when you should attack or come around for another pass at the enemy is something you have to decide. While the focus is on action, being tactical in your decision-making will ensure a high score for you at the end. The game also features Milestones, aka Achievements that offer extended plays and alternate methods.

One of the unfortunate things about the game is the camera.  While I fully understand why it behaves the way it does, it’s a bit jarring how it sways if you flip your ship left and right. But as I said, given the context it’s fully understandable – I just wish it was less swimmy. The two ships are virtually identical, all except in color. However, the color of the ships tend to blend in with the background and other effects. I don’t know of a better solution other than oddball colors like purple and lime green to make them stand out better. Leaderboards are in the game, but on PC only track the local scores you’ve set. However, if you buy on Xbox Live Indie Games, you get to see the high scores of your friends if they have played it as well.

All in all, this is an affordable indie game that’s been well crafted and plays just fine. It won’t blow you away, but it will keep you coming back for more. Alternatively, you can buy on Xbox Live Indie Games for just $1