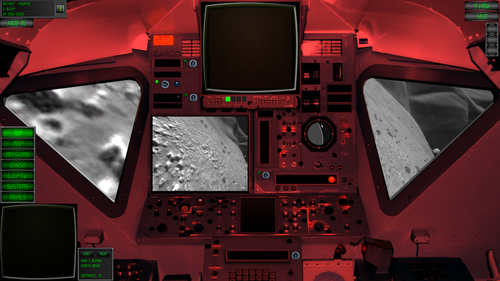 If you’ve ever wanted to fly a Lunar Lander before, this probably the closest you’ll ever come to battling Newtonian physics. It’s a steep learning curve if you’re just expecting to full throttle location to location – you’ll miss and crash in a fiery death each and every time. Landing requires more of you than say, landing an airplane on earth. You have velocity, altitude, the gravity of the moon which is 1/8th of the earth’s, and Newtonian physics at play here. Lucky for you, the developer has created tutorials called “Flight School”. The game controls great whether you’re using a keyboard, gamepad, or joystick. Though I found the gamepad to be the most precise (I don’t have a joystick to compare, but I would assume it’s close). The gamepad (if using an Xbox 360 one) requires no configuring on your end. If you don’t find the controls work for you, they all can be rebinded.

There’s no real story to follow, but there are missions given to you by command. They follow simplistic designs: transport cargo, find lost cargo, or gather data. While they are easy to follow and repetitive, you’ll find the task demanding each time as requires precision and control while giving it your undivided attention. To aid you in your journey, you have access to multiple views which include a full cockpit, a split 4-view that covers multiple angles and just a HUD view from the first perspective. Each view has it’s own advantage and can be up to you which to use. There are currently three landing maps that range from easy to hard, each mission being equally as challenging as the next.

What’s neat is the persistent profile you’ll use for money earned/spent, achievements and overall statistics. As you see in my screenshots, I was not very successful and the government was in the hole – but as time went on, I got a lot better, ranked up to improve my lander’s stats and started earning money. Should you damage yourself, each landing site can repair and refuel you – at a cost. You can reset this, but forfeit your overall stats and achievement in the process, so it isn’t worth it to do.

The game looks really great, “for an indie game” – that’s a terrible phrase to use, but it does. While you’d expect the visuals to be lacking while most of the effort is focusing on the physics, both of them work together to provide an audio-visual treat. Little audio notes of communicating with Earth are there, and the warning sound when your lander is damaged is a heart-pounding affair as you know you’re another incident away from crashing in a burning wreck. You’ll easily learn the audio notes from thrusters, to low altitude, low fuel, and high damage indicators.

It’s easy to lose hours to Lunar Flight, just crashing in a myriad of ways, but it is highly gratifying in so many others once you complete a mission successfully. The frustration of just not getting it right can put off a lot of people. If you want a game to just pick-up and play in short bursts to get your space on, then you shouldn’t hesitate either. This is simulation, so put time into it and you’ll get something back.