Rufus is not a pleasant guy. Ill-tempered and entirely too convinced of his own greatness, he lives at the edge of a small settlement somewhere in the most remote sector of the garbage-covered planet Deponia. He dreams of a better life in the floating cities of wealth and beauty high above the planet surface. When the angelic Goal falls from these privileged spheres down into a neighboring trash heap, Rufus sees his chance. He decides to bring the unconscious beauty back to her home. Only a vague hope of making it off Deponia at first, he soon formulates an unscrupulous plan, as he learns that he is a dead ringer for Goal’s upper-class husband. The planned handover soon dissolves into a wild chase full of twists, turns and mystifying mix-ups…

Deponia is a fast-paced comedy of errors and one of the most unusual love stories in gaming history. The twist-filled story takes its off-beat characters all over trash planet Deponia, a unique game world in the style of Douglas Adams, Terry Pratchett and Matt Groening. The new adventure game from the makers of The Whispered World, Edna & Harvey: The Breakout and A New Beginning is brought to life with detailed HD graphics, hand-painted backgrounds and top-quality cartoon animation.

The point & click adventure game Deponia is out now on Steam. 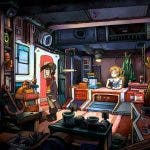