Dale Earnhardt, Jr. is the cover boy for NASCAR The Game: Inside Line

NASCAR fans have spoken, and Dale Earnhardt Jr. narrowly defeated Kasey Kahne in the final round of voting in the “Drive for the Cover” campaign. Earnhardt, nine-time most popular driver, will adorn the cover of the upcoming NASCAR The Game: Inside Line video game, scheduled to be released on Nov. 6.

“We are excited for Dale Earnhardt Jr. to be featured on the cover of the new NASCAR The Game: Inside Line” said Blake Davidson, vice president of licensing & consumer products at NASCAR. “For a campaign that was driven entirely through social media, the more than 775,000 votes cast in the “Drive for the Cover” campaign is a testament to the impact that the NASCAR industry and its fans have across these platforms.”

Activision Publishing, Inc, a wholly-owned subsidiary of Activision Blizzard Inc. (Nasdaq: ATVI) and leading independent game developer Eutechnyx will bring the true NASCAR experience to consoles on November 6. NASCAR The Game: Inside Line will allow players to race with the top NASCAR Sprint Cup Series drivers, teams and cars, as well as feature all 23 officially licensed racetracks. NASCAR The Game: Inside Line will be available on the Xbox 360® video game and entertainment system from Microsoft, the PlayStation®3 computer entertainment system and the Wii™ system from Nintendo. 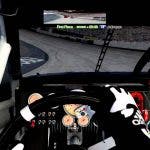 dale earnhardt jr is the cover b

For more info on NASCAR The Game: Inside Line, visit the game’s Web site located at www.NASCARTheGame.com, or follow along on Twitter (@NASCARTheGame) and Facebook (facebook.com/NASCARTheGame).  This game has been rated E for Everyone by the ESRB.