The Walking Dead: Episode Four – Around Every Corner will release Tuesday, October 9th on PlayStation Network in North America for $4.99 or as part of the Season Pass option for $19.99 which includes all five episodes.  The episode will also be available on Xbox Live Arcade Wednesday, October 10th for 400 MS Points as DLC within the original The Walking Dead XBLA release, and also on PC/MAC as part of a Season Pass on the Telltale Games Store, as well as through our partners on Steam, Origin, Amazon PC Downloads, GameStop, and GameFly.  European and international release dates for PlayStation Network are still to be confirmed.  The title is in submission with our international partners at SCEE, and as soon as Telltale Games receives a release confirmation, a date will be announced. 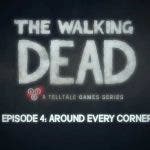