The Box-O-Zombies (BoZ) game for iOS allows players to build and defend their own Zivilization™ in this world building and tower defense game that follows a post apocalyptic story of a man and his dog on their journey to discover who they are, what happened to the world around them, and how to fix it. While the game can be played entirely on an iPad without needing the figures, Kickstarter will help fund the creation of packs of collectible, serialized figures that will appear on your iOS device using the NFC reader (“The Puck”) that connects via Bluetooth. Backers can become one of these figures themselves that unlock exclusive in-game content, by pledging at the top tiers.

I spoke with the Head of Marketing for the Kickstarter, Amanda Perry. She explains the technology and future updates:

The NFC reader works similarly to the Skylanders Portal of Power. You will set your figure on “The Puck” and it will unlock in-game content, like characters, story-lines, etc. A little bit about NFC. NFC stands for near field communication. NFC tags can be printed and are readable AND writeable and can be encrypted, making them a really neat tool for interactive gaming. Like a Magic the Gathering card game, where you could store character stats on the actual figures… yeah, cool right?

Each actual figure will be unique and serialized. They will be tied to your account. Other then that, most things are on the Kickstarter page. We will be posting more art assets as they get finished, more videos and developer diaries. 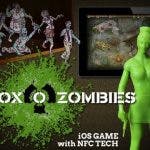