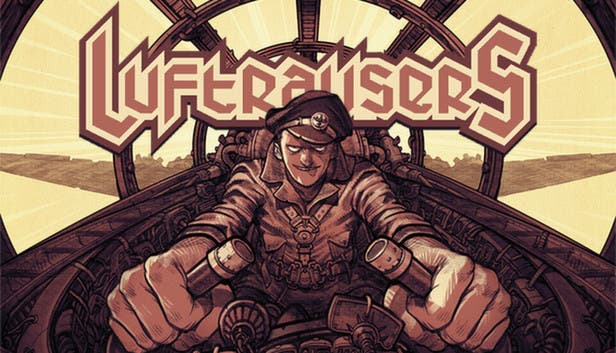 The Luftwaffe was the aerial warfare branch of the German Wehrmacht during World War II. Luftrausers means… something. Luft in German is “air”, and Raus is German for “out”. So “Airouters”, I guess? Or something with clearing out the sky? I don’t know. All I know is this game has me “araused” in the nearly four hours I’ve put into it, and I’m ready to go back for more.

Vlambeer’s LUFTRAUSERS is an enhancement of their Flash game, Luftrauser. The game takes its cues from World War II, and creates an alternate history where planes can be customized. Each rauser can be outfitted in three different ways: weapon, body, and propulsion. Weapons can vary from the standard machine-gun to lasers with a strong beam that does massive damage but prevents you from turning, homing missiles that require a cooldown before using again, and even a slow-firing, but absolutely devastating cannon. Body types change to provide more health but sacrifice movement, less health with slower movement, or drop bombs passively while having a slower health regeneration. Propulsion allows for your rauser to turn faster or slower, shoot guns out the back, or not be affected by gravity.

This mix n’ match gameplay gives a great deal of experimentation and replayability, as changing each part out gives one of three different challenges to accomplish. Each combination also displays the name for the rauser you’ve assembled, and upon entry into battle plays a different music track to accompany it.

Challenges provide the game’s carrot on the stick. You’ll be given objectives to destroy a certain number of enemies while firing nonstop, killing a battleship, or just reaching a set score. These challenges affect your play-style and are constantly getting you out of your comfort zone. Completing an objective for a given part unlocks the next tier. The act of flight is an interesting one. Each plane somewhat uses Newtonian physics, where they are able to maintain momentum in a certain direction once propelled, and then the gravity of the world pulls you down beyond that. Flying high into the air allows you to reach the clouds where you can take on some damage but get refuge from the barrage below. The same goes for the water, as you dive to a shallow depth below the surface of the ocean also again taking damage, but gives you a chance to evade without being hit further.

While shooting and killing, you’ll be wracking up a combo if you time everything right. Keep it going up to x20 and you’ll have max score and begin accruing massive points. Not only does this score get you a place on the leaderboards, but helps you reach point goals. Point goals are what levels you up, unlocks new parts to equip, and new color palettes to try out.

While the inclusion of color palettes seems welcome, I found myself trying them out, but not using them for more than one game. They quickly became an eyesore or made reading text or determining foreground from background more difficult to discern. LUFTRAUSERS isn’t forgiving when it comes to damage, but you are allowed to do kamikaze-style ramming runs with other planes and boats that will either hurt or destroy them depending on what health you have left. Regenerating health is how you sustain a life here, and only through laying off the trigger do you replenish your rauser to fighting condition. Take on too much damage and you’ll explode, ending your run. Equip the body type of nuke, and upon death send a devastating shockwave to pull in some extra points and take others to the grave with you.

There’s only one battlefield in which you’ll be rausing, and is littered with enemy planes, boats, battleships, aces, and eventually blimps. The onslaught of enemy presence gets overwhelming in a “bullet hell” kind of way, that’s absolutely entertaining as you’ll have to employ more advanced tactics to maneuver through gunfire coming at you from all sides.

LUFTRAUSERS‘ deceptively simple, objective-based leveling and unlocking is thoroughly engrossing. Vlambeer understands the “just one more game” feeling. This sepia-toned, arcade high-scoring shooter is always an enjoyable experience whether you perform well or die miserably. But you’ll keep returning often, as there’s an incentive constantly pushing you forward to complete that next objective, best your own score, or raise your leaderboard ranking amongst friends and strangers.