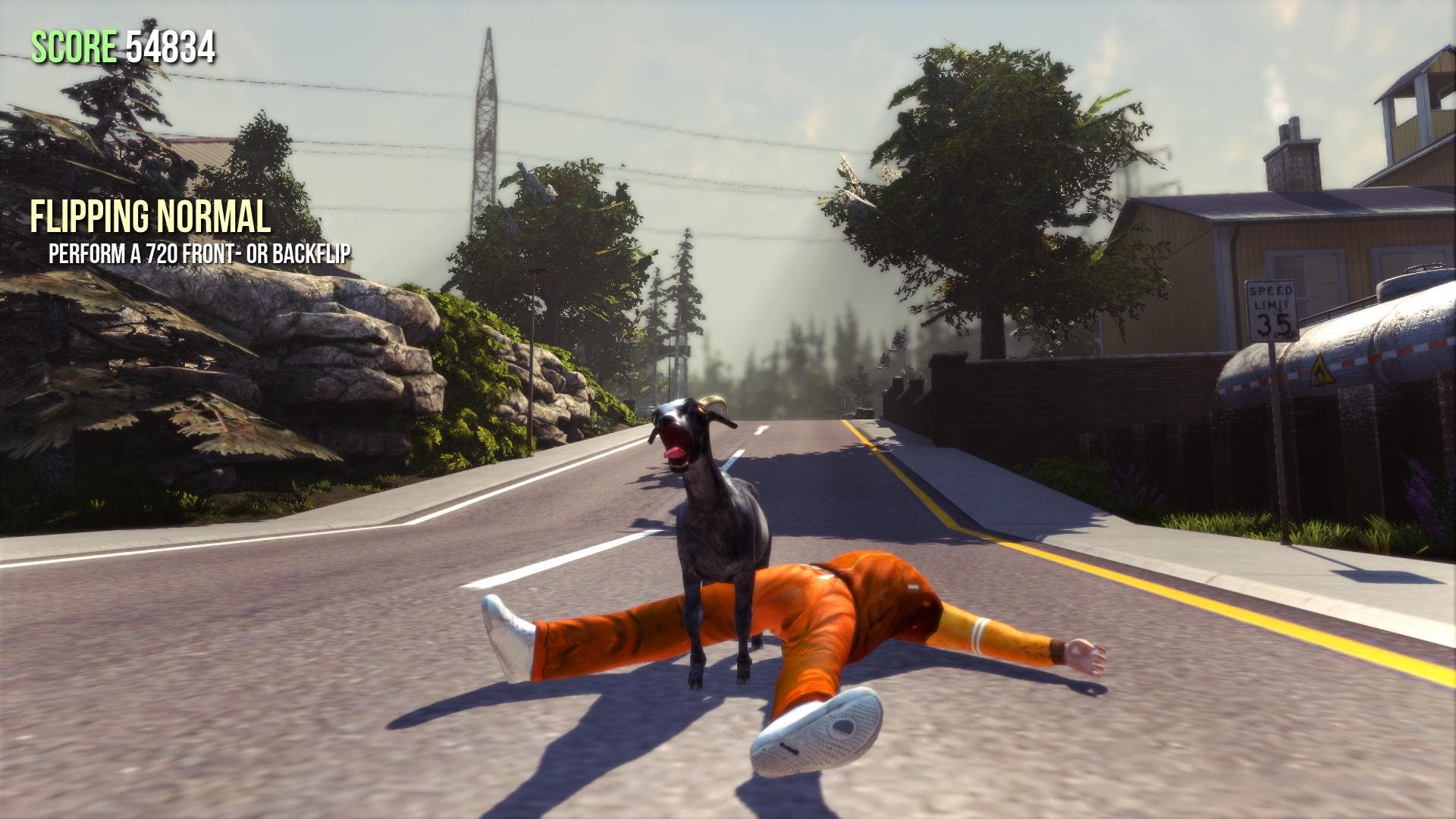 Coffee Stain Studios became overwhelmed at the positive responses to their trailer for Goat Simulator. It was just a silly thing that was created from a one-month gamejam. So they decided to clean it up and release it commercially. The result is a hilarious spoof on Simulator-type games that lasts the length of a sugar rush.

Upon entering the game, you are most definitely in control of a goat, complete with horns and a tongue that hangs out of its mouth. You’ll run, jump, baa, and headbutt around. Quests are the only thing to give you some structure in this open world sandbox, allowing you to understand the game’s mechanics and explore. This and the included achievements, which I don’t normally touch on, give the game something to strive for in an otherwise empty game.

This goat is more than a tin can-eating animal. Get your goat onto a trampoline, and it soar high into the sky with each ever-increasing jump. You’re capable of doing tricks similar to Tony Hawk’s Pro Skater, where you can do 360s and 720s. More elaborate moves have ridiculous names to accompany them. You’ll earn points for nearly everything you do, from headbutts, getting hit by cars, jumping on boxes, licking people, to blowing up gas stations Michael Bay-style. In order to retain these points, you must keep your combo going with new and different tricks. The world you’re dropped into is sizable, with rural and suburban areas to explore. Naturally, there are plenty of secrets and hidden things to discover – these are best left for you to find rather than for me to spoil. 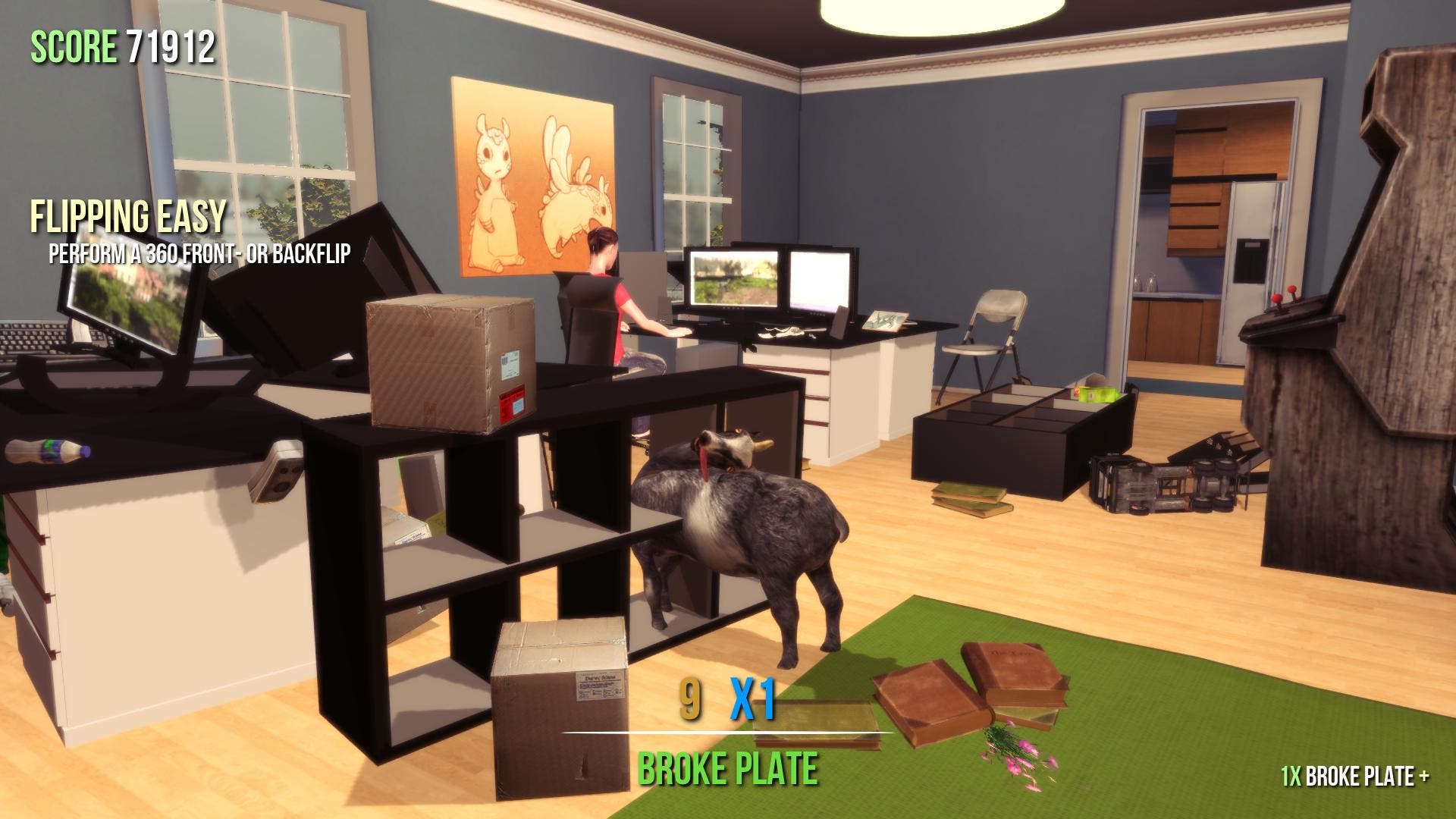 The game has its fair share of bugs, and even the store page claims that as a feature. While they are explicit with stating bugs exist, it’s certainly weird to expect such things. Often though, it does provide funny side-effects. Such as your goat’s neck getting elongated, the tongue attached to objects that are stuck as you pass through solid objects, and less funny moments where you fall through the game world or land outside the boundaries with no way to return other than to respawn. But since the bugs were outlined, you should come to expect and accept them.

What is not acceptable, is game crashes. While Coffee Stain Studios has expressed that they’ve eliminated them, I was not so fortunate. I had rebound some keys due to personal preference, and had accidentally clicked “default” to reset the key bindings, resulting in a crash to desktop and an irrecoverable machine requiring to reboot. Then, once I started the game, I was presented with an achievement. While it deals with the possibility of an unknown circumstance, getting an achievement for game crashes is a new low.

The parody and satirical nature of Goat Simulator is admirable. It’s a riot to play, watch other people play, and is a lot of fun – yes. However, the novelty wears off quickly and once you’ve completed the game’s quests, it becomes up to you in what and how you do things.  The longevity of the game remains to be seen, as there is built-in Steam Workshop support that could provide the game’s legs that it sorely needs. Until then, Goat Simulator is not much more than a one-liner joke that isn’t worth the price of admission to this comedy club.