I’ve always been a stickler for controller comfort with my small Asian hands, so larger controllers and taller sticks have always been an issue for me (Shakes fist at the original Xbox Duke). When I got KontrolFreak’s Phantom and CQC products in, I was a little cautious as to how well they would work. Long story short, I came away mostly positive. 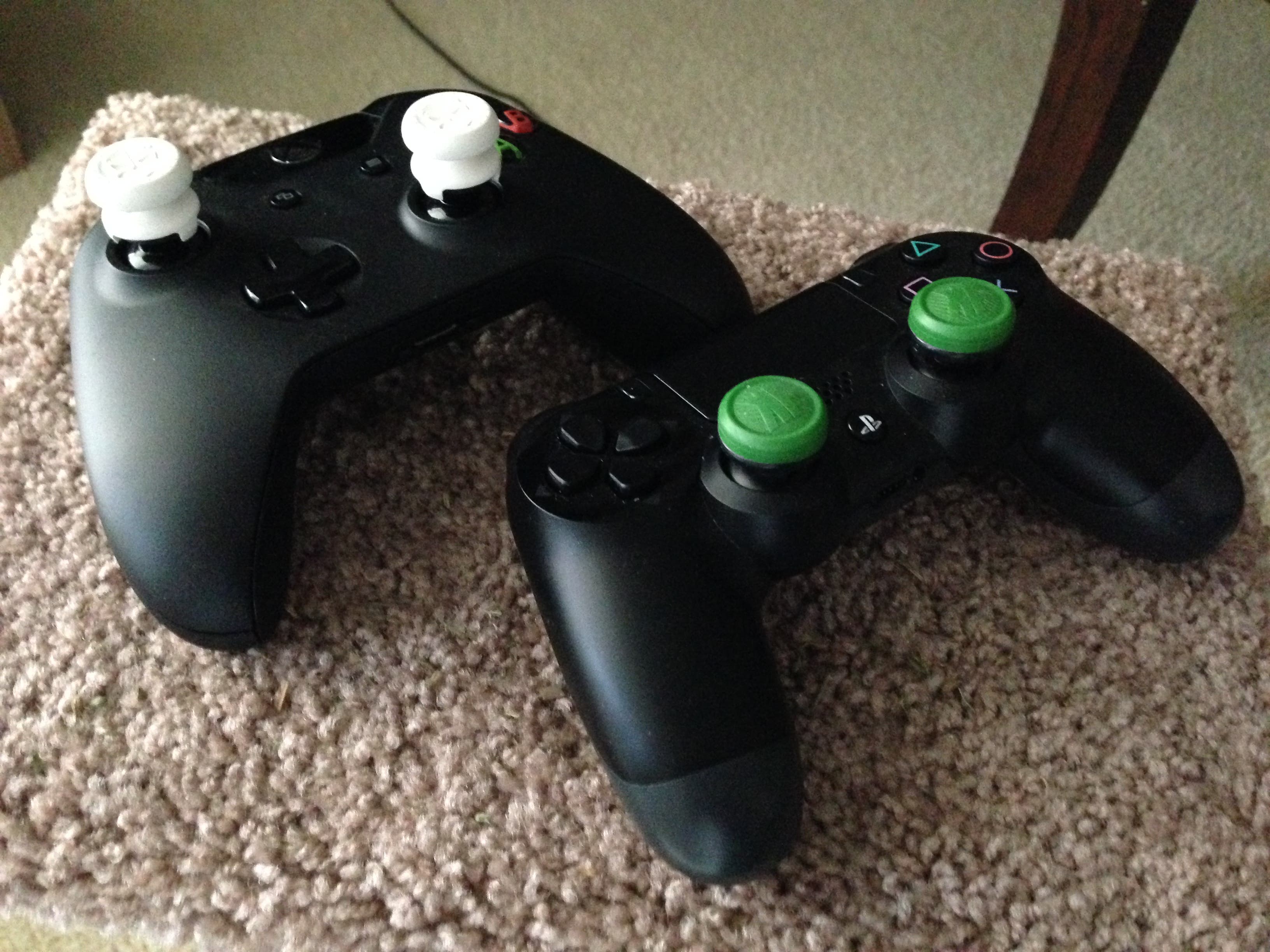 The design of these caps are pretty simple; they rest on top of the analog sticks but are sized just right to “snap” into place, keeping a tight grip. Kontrol Freak sent two different styles my way, the FPSFreak Phantom and the CQC Signature Series. The Phantom they sent was for the Xbox One and the CQC for the PS4 but you can order these caps for the Xbox 360 and PS3 as well, plus they have a variety of styles to choose from. The Phantoms were white with a Skull in the center, obviously trying to cater to the Call of Duty crowd which they even mention in their advertising. The CQC caps were this radioactive green color and just had a KF in the center. 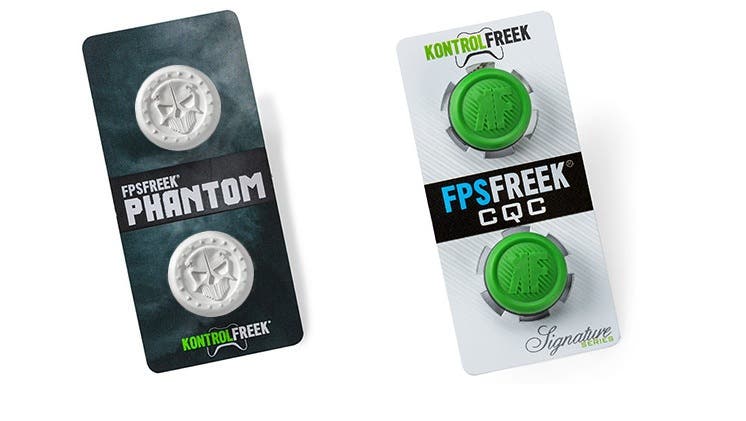 The Phantom is quite tall and has a thick head on it’s shoulders. Visually it looks like I’ve turned my thumb-stick into a joystick. With my smaller hands, this was not the ideal way to play. I could reach the tops of the caps but my range of movement was limited. I ended up pushing the stick on the sides of the tops and surprisingly, it still gave me a little more precision. The added height on the sticks was enough to make finer adjustments without any hassle. I spent some time in Plants Vs Zombies Garden Warfare (PvZ:GF) and attempted to see how well things went in Forza Motorsport 5. It did take a little getting used to in PvZ:GF but after a while it did become easier to put the cross-hairs where I needed them. Forza Motorsport 5 was a different beast and I could not get used to it; it felt too loose. Just to be silly, I attempted to use it as a joystick in Killer Instinct. With the controller on the table and my left hand on the stick, I quickly found out that it was a stupid idea. 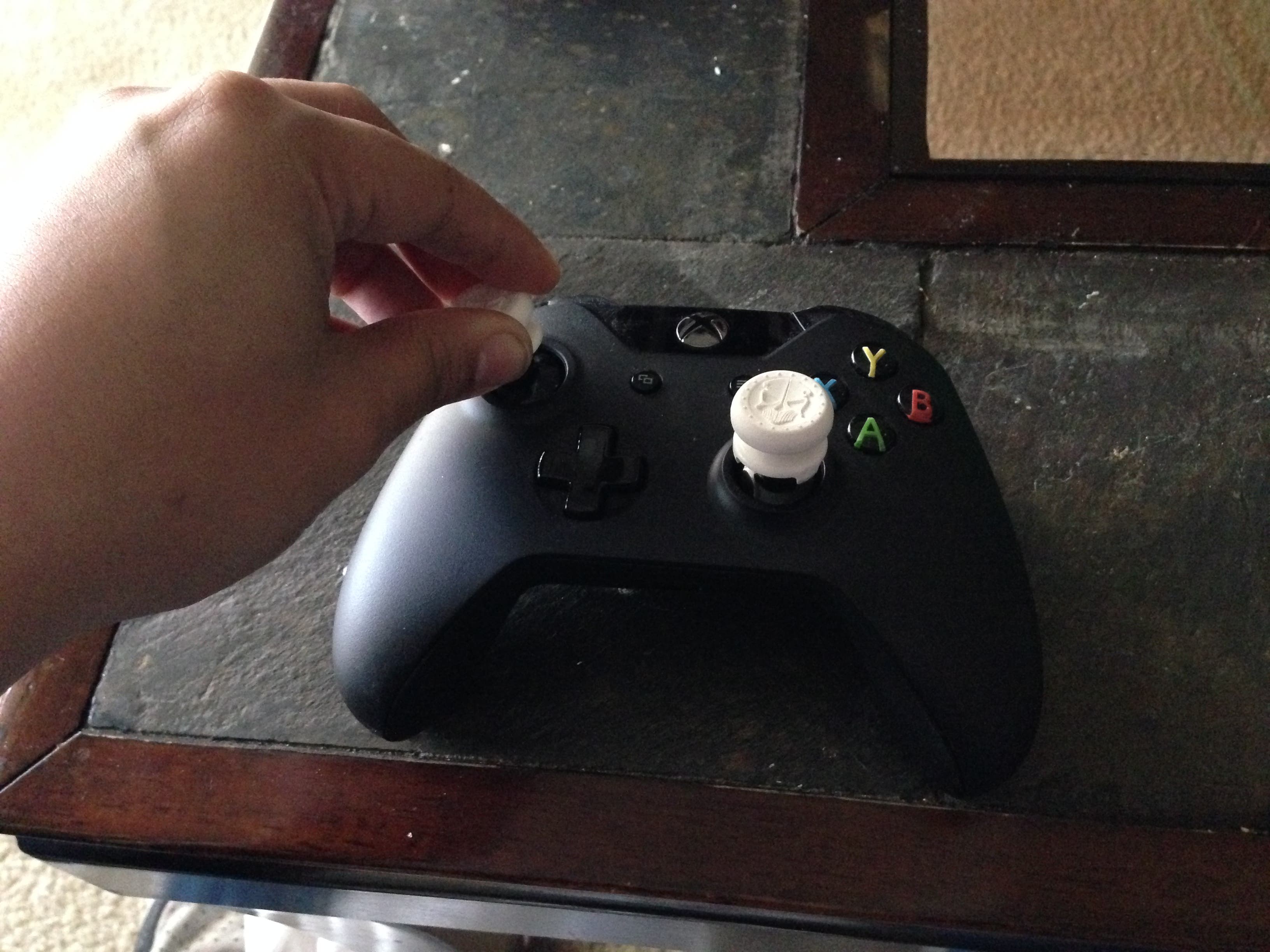 The CQC on the other hand was a little more my size, it’s a little less than half the size of the Phantom. With the reduction in height, it wasn’t as precise a feeling as the Phantom but did have an overall better feel. Where the Phantom was not comfortable for me in the slightest, the CQC didn’t ask my thumbs to be stretched high into the sky. I tested the caps on Need For Speed Rivals, Lego Marvel, and a little bit in Infamous Second Son. I didn’t feel too much of a difference on the 3rd person perspective games except in the camera (right stick). I could move the camera around a little more finely without having to bounce it back and forth. I wasn’t expecting much out of Need For Speed since the Phantom’s didn’t do too well in Forza, but surprisingly I did okay. Being that the sticks weren’t as high, I was able to still drive comfortably and use the added grip on the caps to keep my fingers on the left stick. 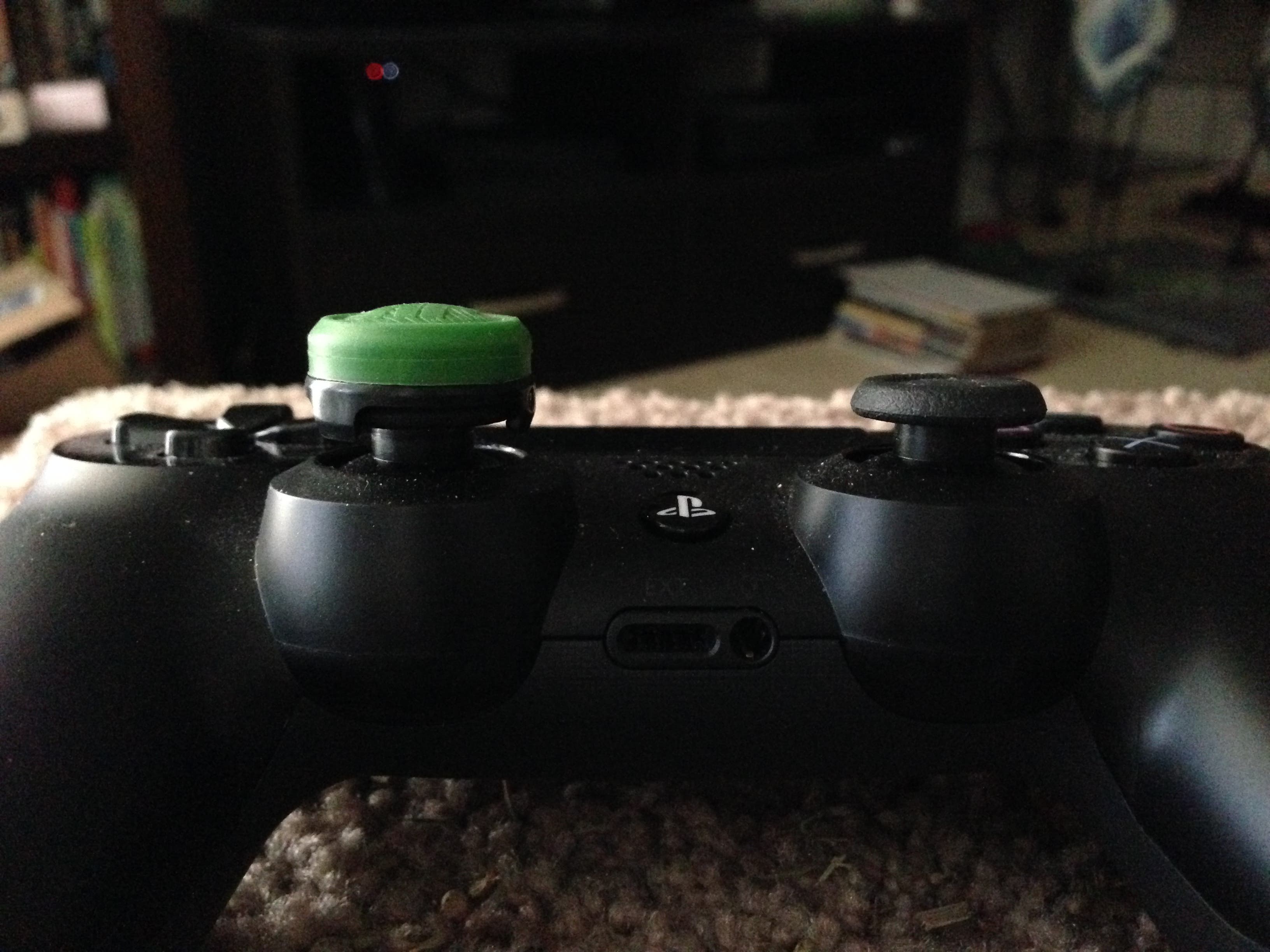 Both of these caps are advertised for enhancing your First Person Shooter (FPS) game, but I do not own an FPS title in my Xbox One/PS4 collection. Just from the feel alone, I could see where the benefits would come in with such precision for the Phantom and CQC over the standard sticks. Also, being that the caps fit on snugly, I wouldn’t want to keep taking them on and off for different games for fear of rubbing off the actual gripping on the factory sticks, so why not test them with other games as well right? 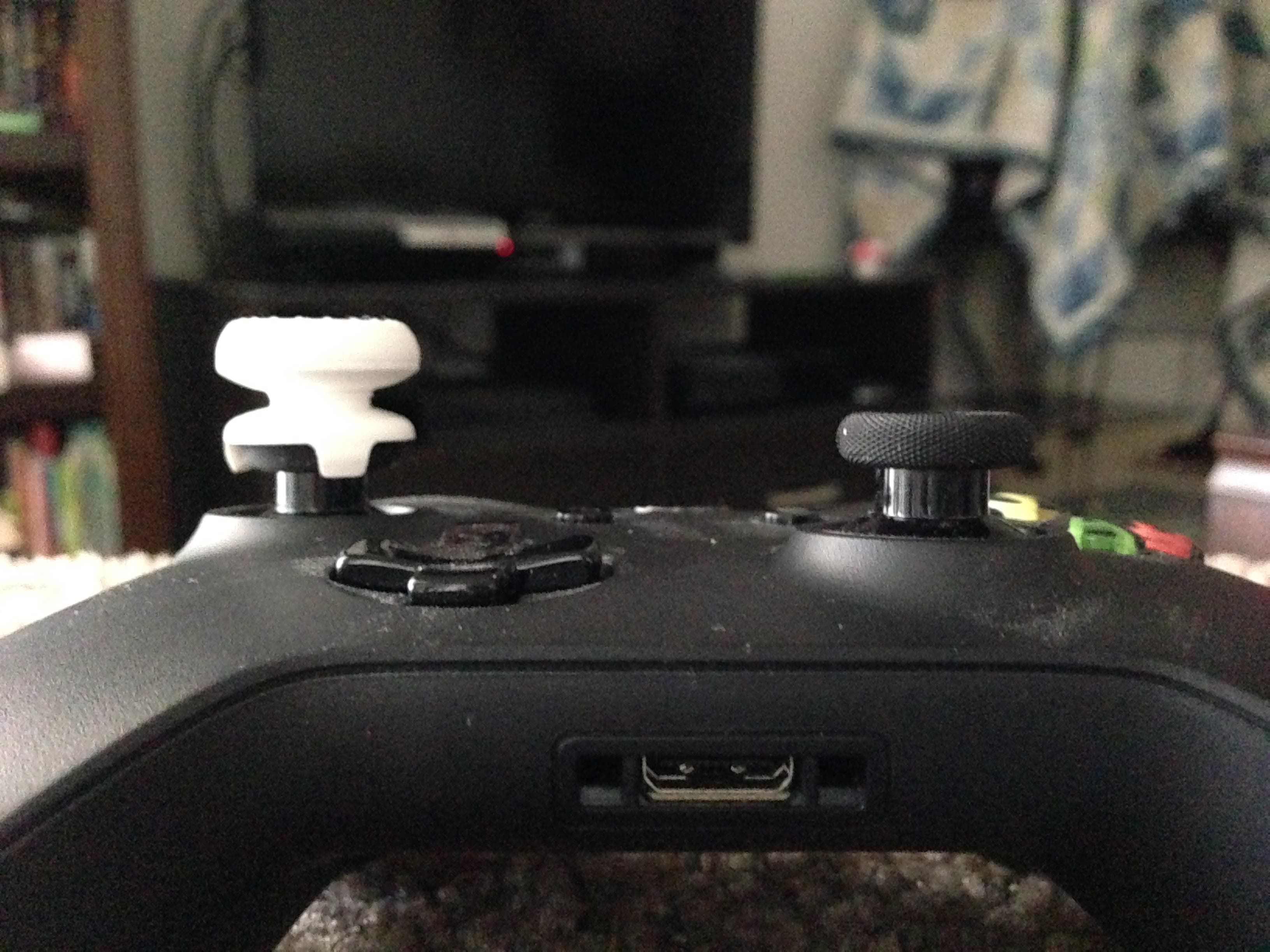 The product works as intended and wonderfully so, if you have the right sized hands. For me, I enjoyed my time with the CQC over the Phantoms but if you’re a man or woman with bigger hands than I, go for the Phantoms for that added precision. You can get these guys in a variety of colors and styles to suit your needs so you’re not stuck with an ugly green color (sorry, green and my PS4 controller do not mix). The Phantom’s retail for $19.99 and the CQC for $15.99 but I don’t think that the benefit vs cost here is strong enough to plop down a $20. I could swallow $10 for the CQC and a few dollars more for the Phantoms since they are larger. 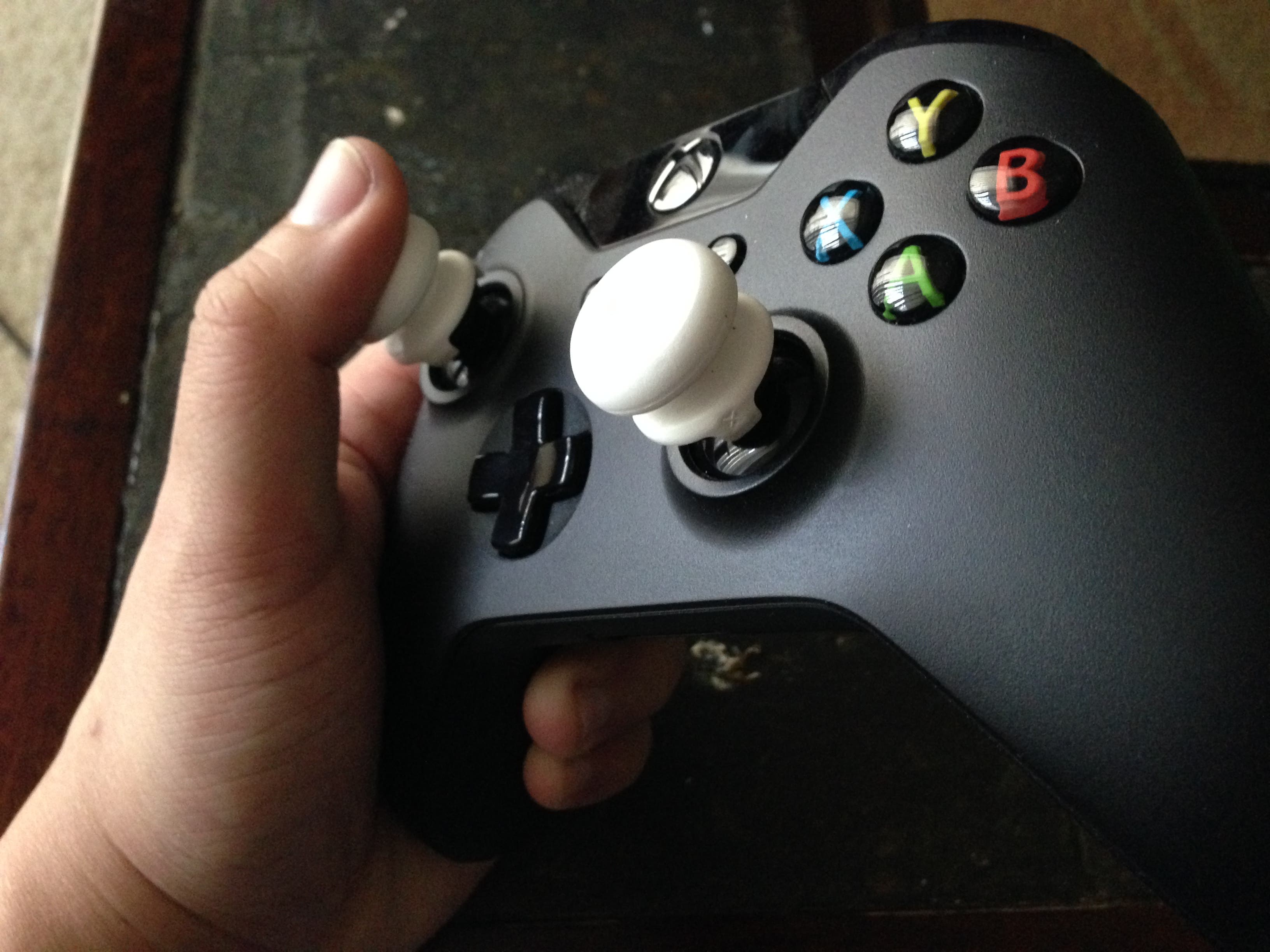 To someone big into the FPS genre looking for any little bit of an edge over everyone else, you may be able to justify that price, but for everyone else I feel it’s a bit too steep.

Review units were provided by KontrolFreek for review purposes