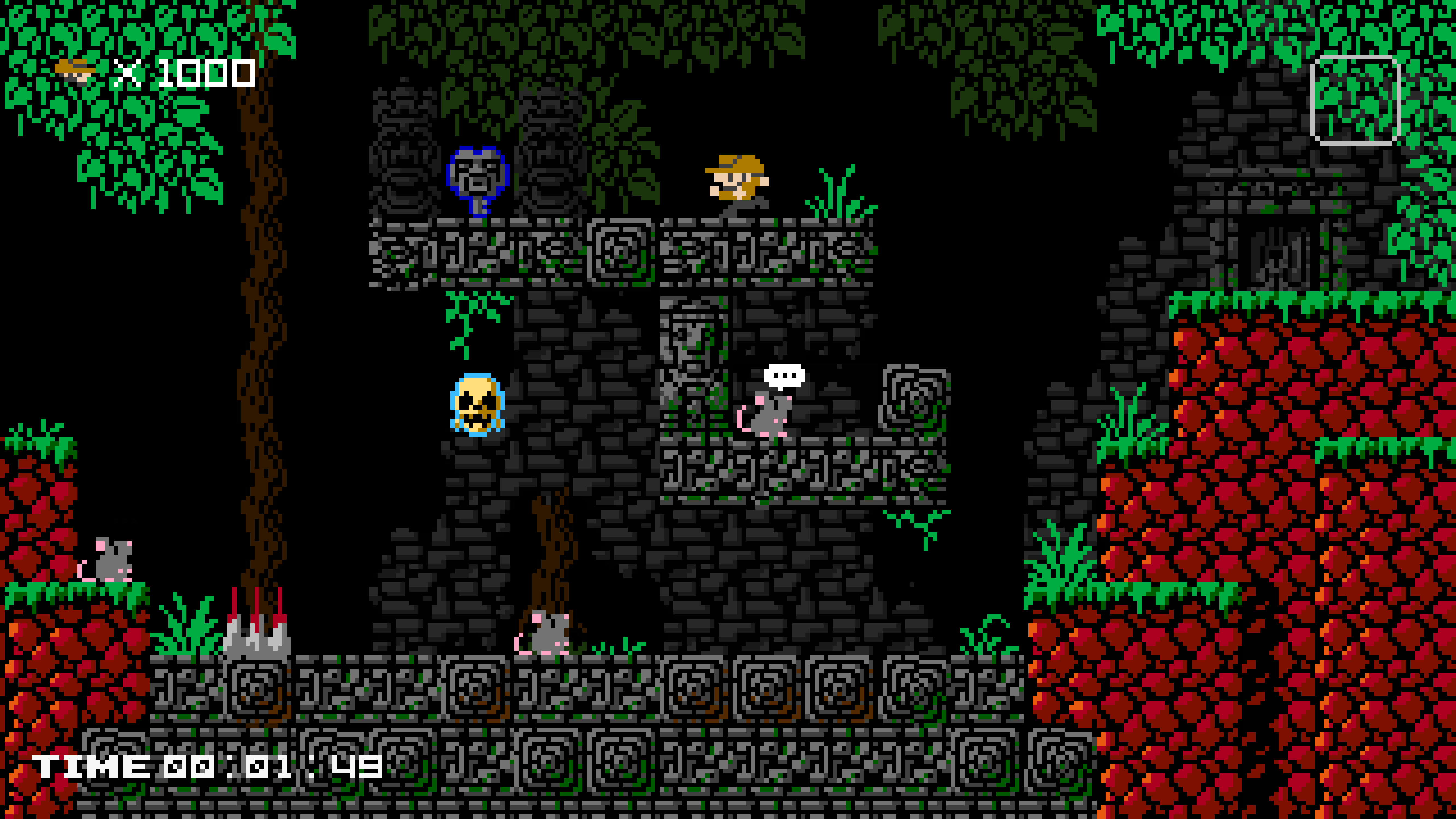 The games that brought you the most grief, the most heartache, are the ones you remember the most. There’s Battletoads, Teenage Mutant Ninja Turtles, and Ninja Gaiden to name only a few. They rest in the pantheon of difficult games you most likely never beat. 1001 Spikes aims to be that kind of game. While it is beatable, it is not willing to just let you. Aban Hawkins is an explorer liken to Indiana Jones who is searching for his father who happens to be missing. So you set off to South America to begin the rescue operation. In order to reach his father, must endure a sadist number of traps within traps that reveal more traps. Spikes, fireballs, and large chasms will be the most things that cause your demise. But with 1,001 lives to expend, there’s room to retry. With a name like 1001 Spikes, it is certainly setting the expectation of an intense difficulty, and it more than follows through with that expectation. The story levels cross over 60 stages in total, and the time it takes to complete the game is wholly dependent on player skill.

While there isn’t a visual timer either ticking up or down, the game is counting anyway. Beyond that, each level is layered with traps. Within levels, you have to collect keys to open the way out, which may be opposite of the door. Often you’ll have to re-navigate traps in order to leave any given level. Along the way, you’ll see skulls that require a bit more dexterity or maneuvering to collect. Accrue enough skulls, and you’ll begin to unlock new characters, new modes, and more. 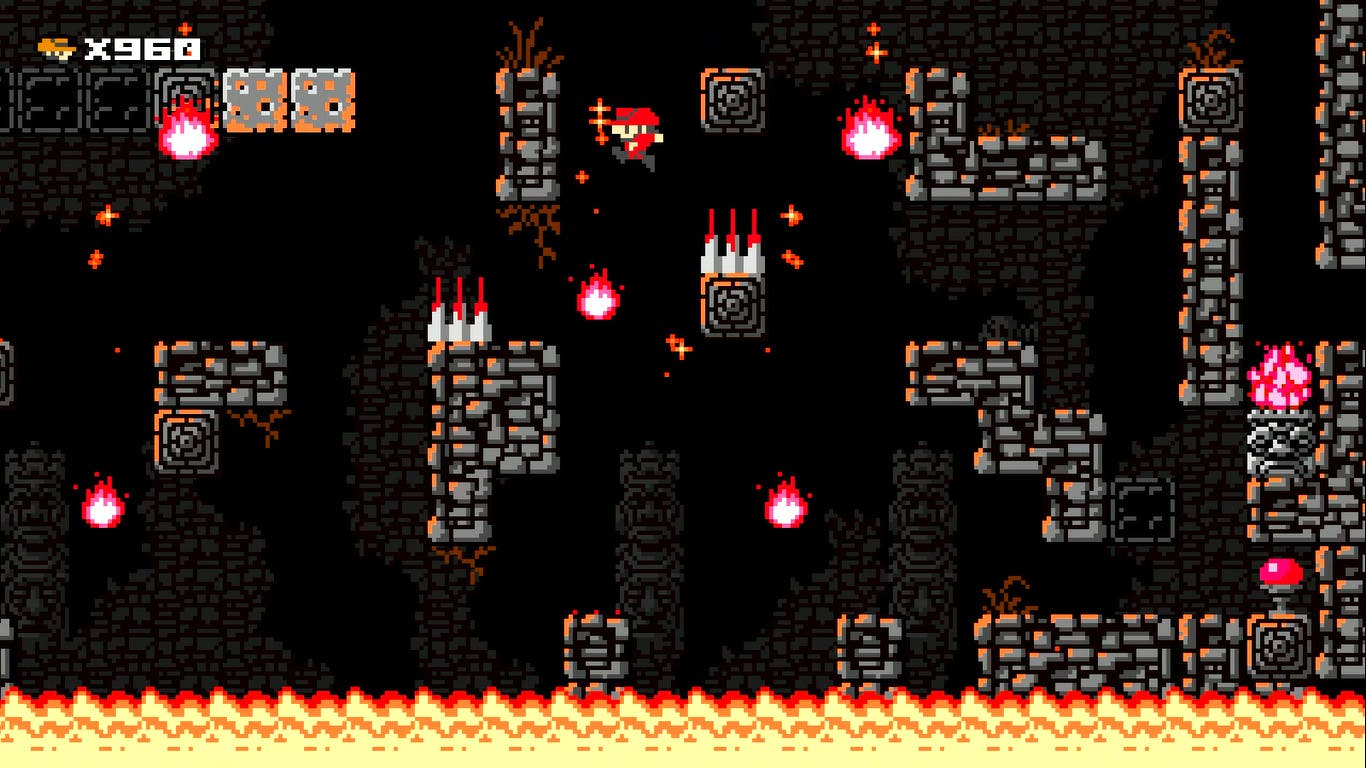 Starting a game, you get a total of three slave slots. Going straight to the story mode, you’re dropped into World 1-1 with a quasi-tutorial that teaches you the ropes. Once you start World 2-1, the game truly begins and starts throwing the real challenge at you. Should you get stuck at any point, the modern designs comes through, in which you’re able to skip a level. This eases the frustration ever so slightly so that you can make progress without being completely roadblocked. It is never the fault of bad design or AI discrepancies. Levels are expertly crafted and timed to perfection. There’s very little wiggle room for mistakes.

If it weren’t for the game’s controls, it would be an absolute nightmare of a game to be battling the character’s movement as well. Being able to control the character reliably is essential, and 1001 Spikes does not falter in that regard. Now, what may confuse many is that there’s two jump buttons. There’s a low-jump and a high-jump. Both are essential to navigating. This makes pressure-sensitive jumps are never an issue. Here you are guaranteed a certain jump height that will never be higher or lower than what the button press does. This gives exactitude to any given jump so that any deaths imbued, are all the fault of the player’s.

Ancillary modes are nothing like the main game, which is good. These new modes that can be unlocked are under the Arcade section. There’s the Tower of Nannar, which has you climbing a tower, avoiding obstacles and life-threatening objects to rescue a princess, and Lost Levels, which has you playing a Super Mario Bros 2-esque version of the main game, geared more for cooperative play. They can be, and are encouraged to be played cooperatively. There are even ways to earn you coins that can be spent at a merchant for acquiring more lives, giving incentives for playing with friends and checking them out.

Soundtrack by Misoka and Rushjet1. The chiptunes are a standout amongst the great gameplay, and is one of those soundtracks that can be listened standalone from the game being played. 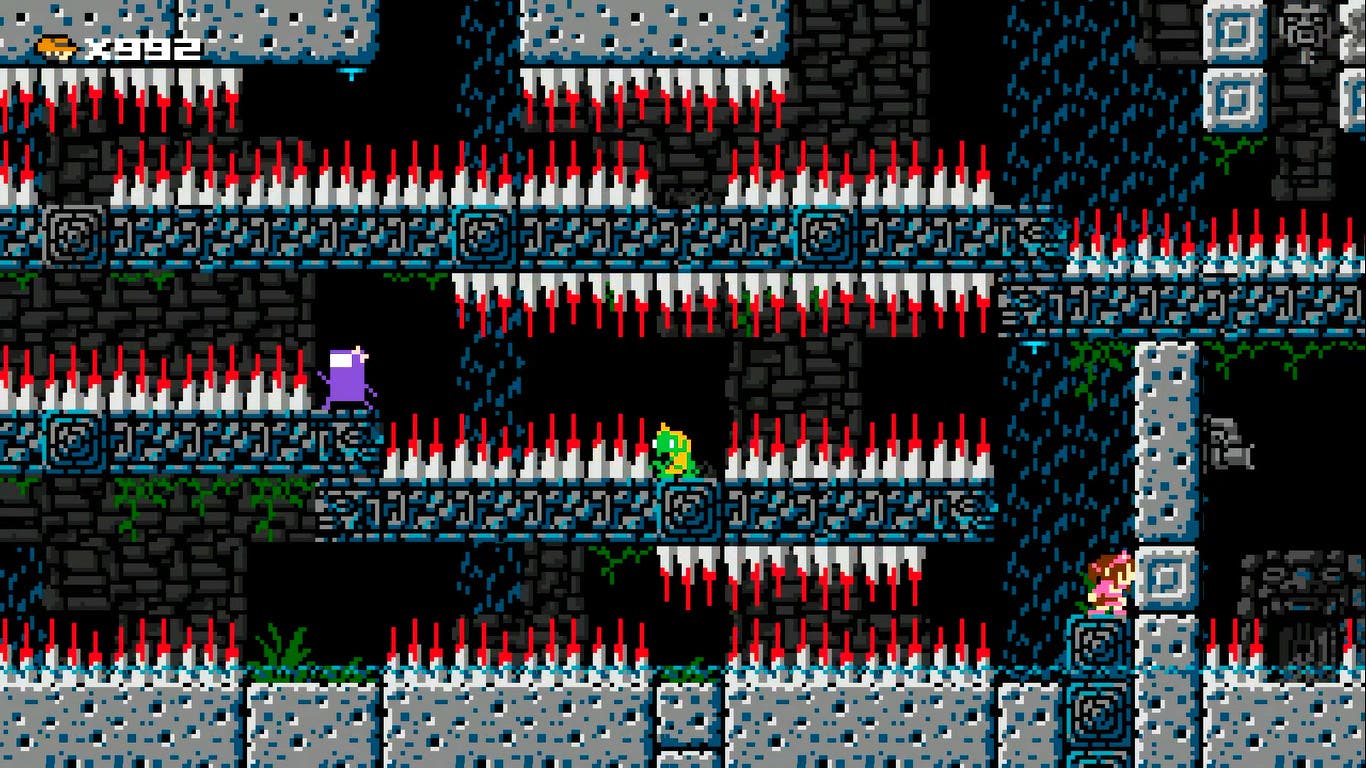 1001 Spikes will likely discourage you early on. And rightfully so, it is a difficult game. So if you’re the type that gets overwhelmed by difficult games, this is not for you. But if you want a good challenge, and like to feel the satisfaction of completing a particularly devious level, then this game is absolutely for you. Beyond the hazard-filled story levels, lies additional modes, ways to extend your character’s number of lives, as well as new modes to try solo or in co-op, adds an unexpected but welcome depth and longevity to the game that makes it an absolutely worthwhile purchase.