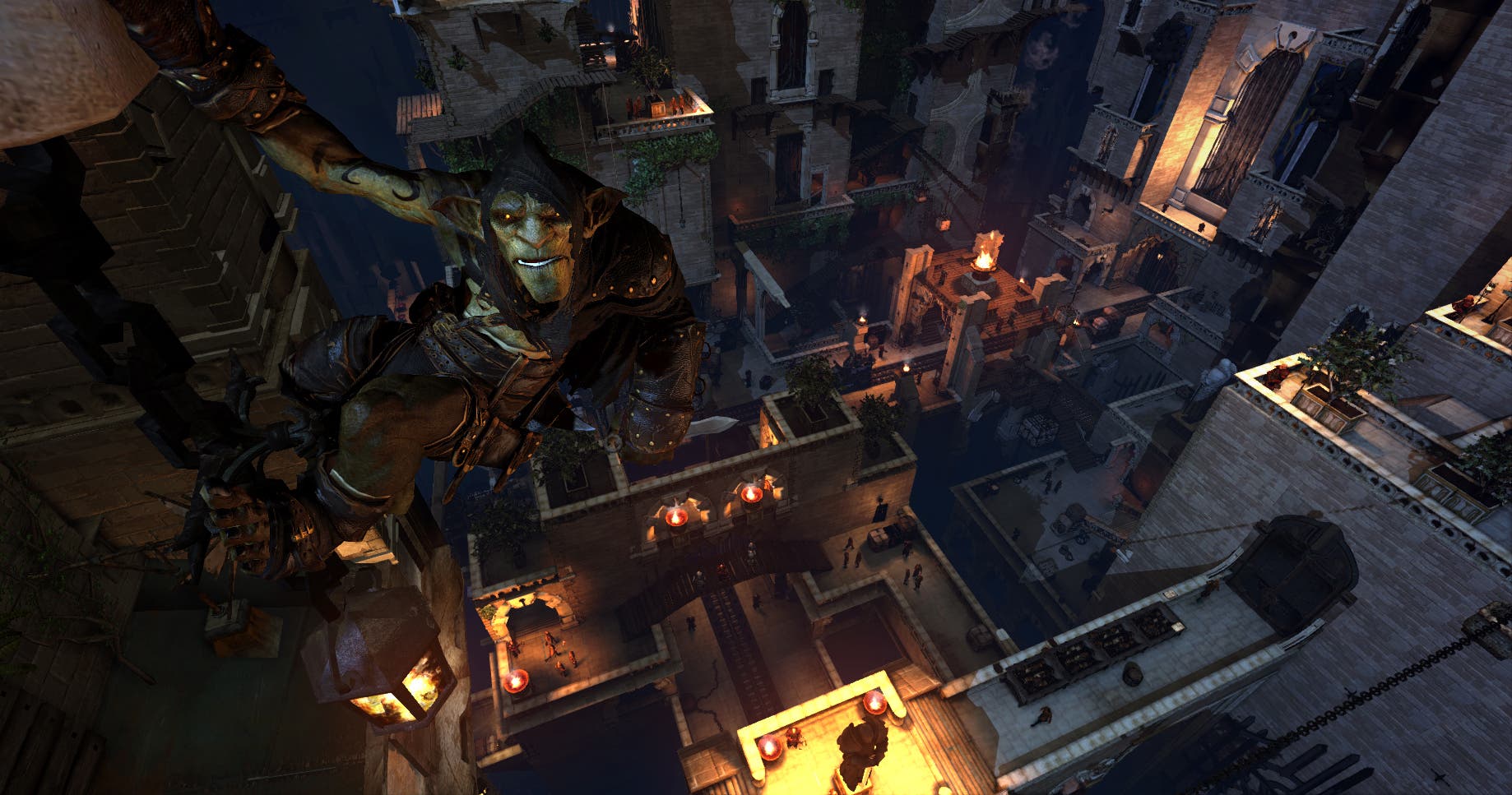 This is not some weird musical game based off of the popular rock band, Styx. No, this is a hardcore stealth game that will ask a lot of you in the first hours, but becomes more rewarding as time passes. And you will relearn how to play this genre, which as of late, has become soft. And while your time with Styx: Master of Shadows could be better spent elsewhere, this game that requires patience and equal parts skill, to do well.

Styx is an amnesiac, with an incredible, crippling headache, he can barely remember his own name. But he knows one thing, he must acquire amber. In almost exhibiting addictive behavior, is on quest to find the the source of all the amber in the Tower of Akenash, which promises all of the amber he needs.

Styx is also 200 years old, and rightfully salty for his age. And for all the characters that get introduced, I like him the most. He’s the only likable character the game, and really the only character of note. There’s the main villain, Governor Barimen who’s very one-dimensional and typical antagonist that you hate simply because he’s introduced as the bad guy. The story of course is not why you may be drawn to Styx, and it really shouldn’t be. 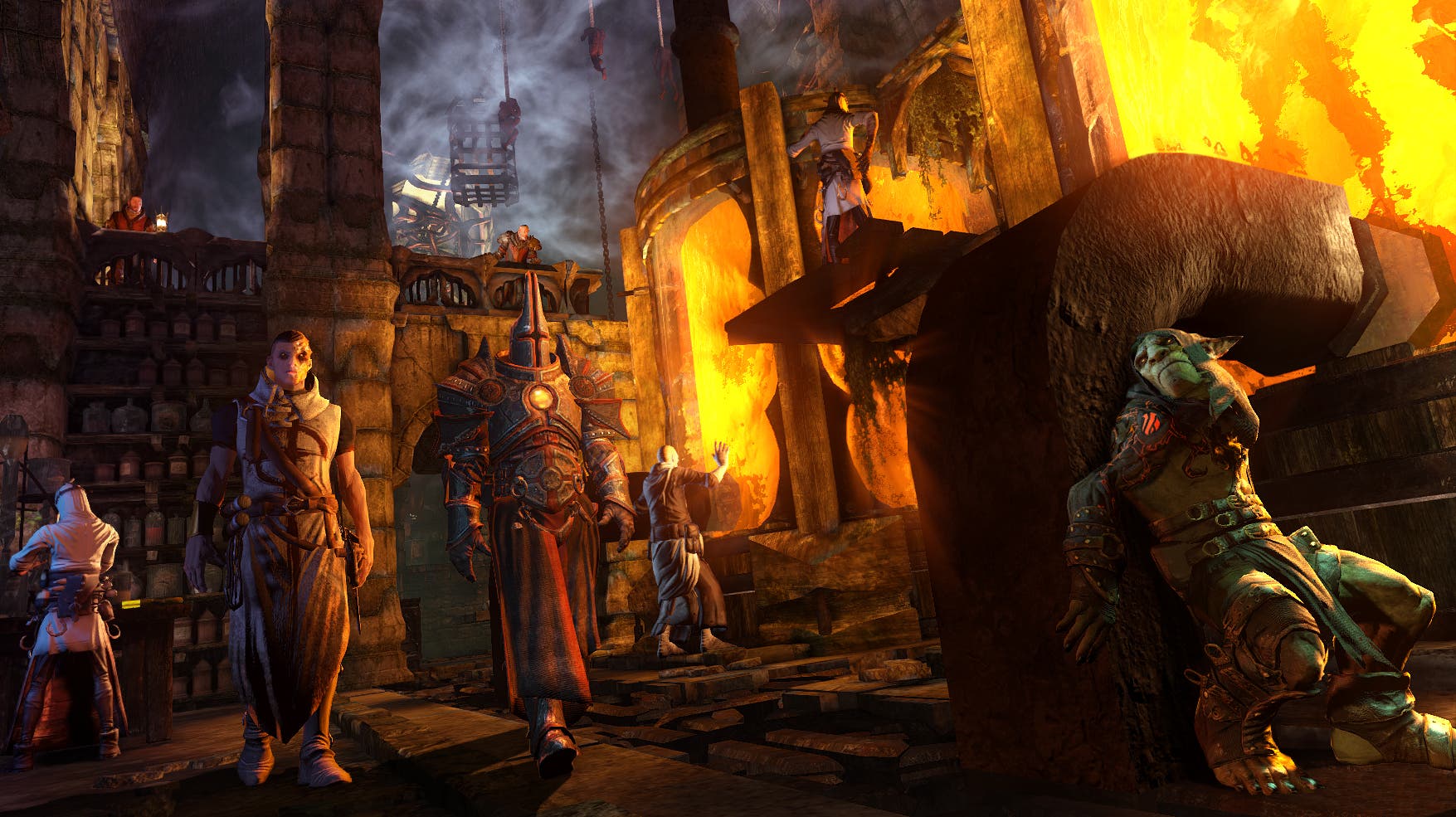 This is a stealth game of trial and error, at least for the impatient. Thankfully on PC there’s the popular “Quick Save” and “Quick Load” hotkeys to undo mistakes. But beyond that, the ability to save anywhere (except certain situations where you are barred from doing so) is wonderful. You’re encouraged to play on harder difficulties, but the game’s systems simply can’t support it.

It’s unfortunate though, that there’s no dynamics to the game. You’re required to take a lot of time, observing patterns and movements. Often a conversation happens, then a character moves out of the way, starting his or her patrol. You’re offered some mercy with sleeping guards that can be easily taken down. Reloading a save will see those events play out the same way. But what compounds this problem is the fact that there are so many bad guys in any given level. 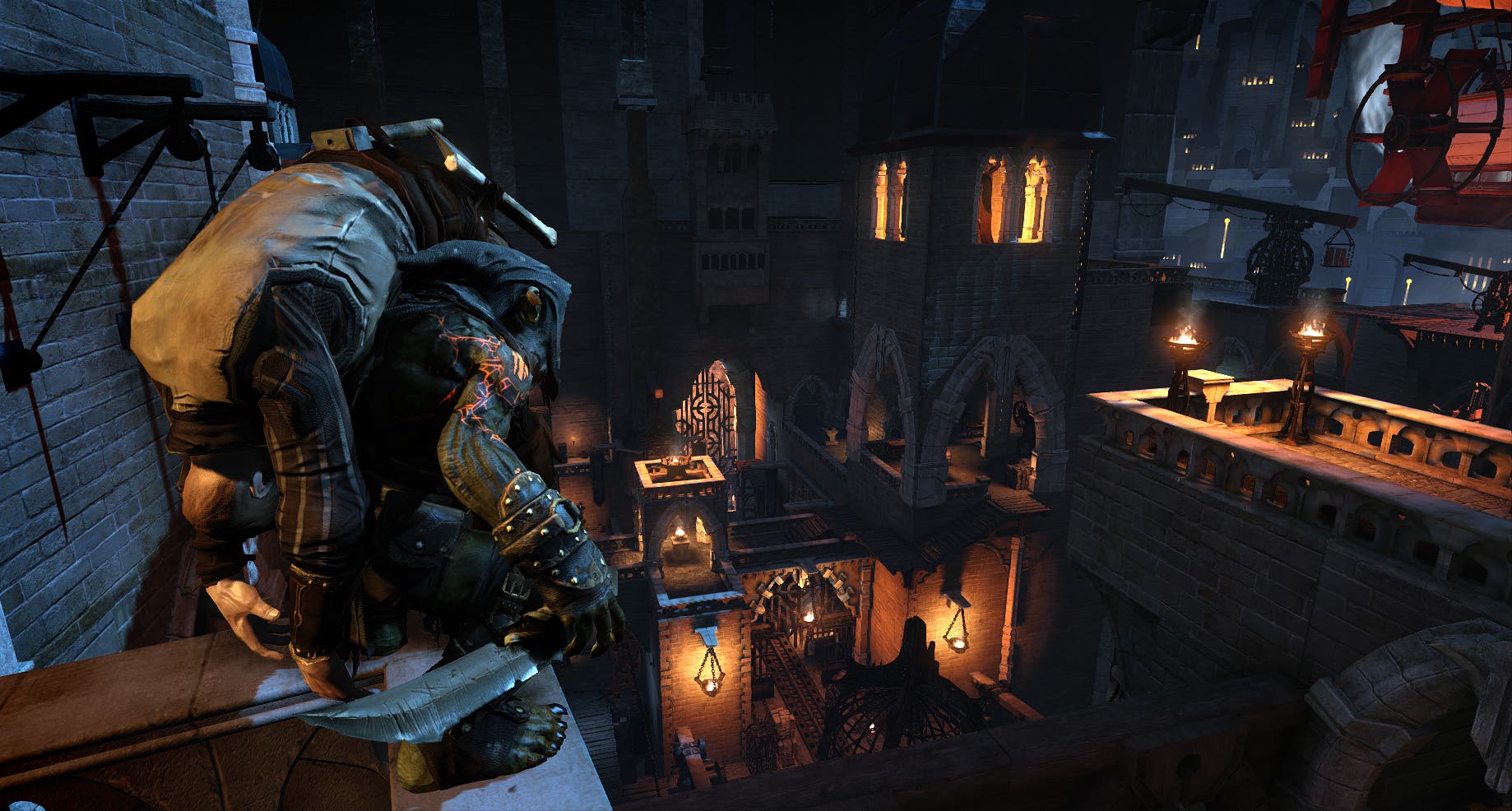 As predictable and deliberate as enemy movements are, you can’t predict when the game will let you performing the necessary platforming to traverse or otherwise evade pursuing enemies. Want to latch on to ledge so that you can hang from them? No, you’re just going to fall to your death. This happens far too often. However, with Styx’s personality being so endearing, that when he falls to his death, will sometimes cry out “fuuuuuck youuuu”. It brings levity to the situation of having just died.

You are fragile. While you can engage in combat, brandishing a rather large knife for your stealth kills, you can’t use it offensively. When you fully alert a guard to the “red” status, you get turned around and locked into combat. And in this, you can only parry incoming attacks via quicktime events. After so many parries depending on the enemy type, will you then get the opportunity to kill them. This works for one-on-one fights fine, but if a group of enemies are alerted, especially those wielding crossbolts, you’re as good as dead. Combat itself just isn’t fun, at all. It’s unfathomable why this type of system was implemented, it’s best if you just avoid combat altogether. 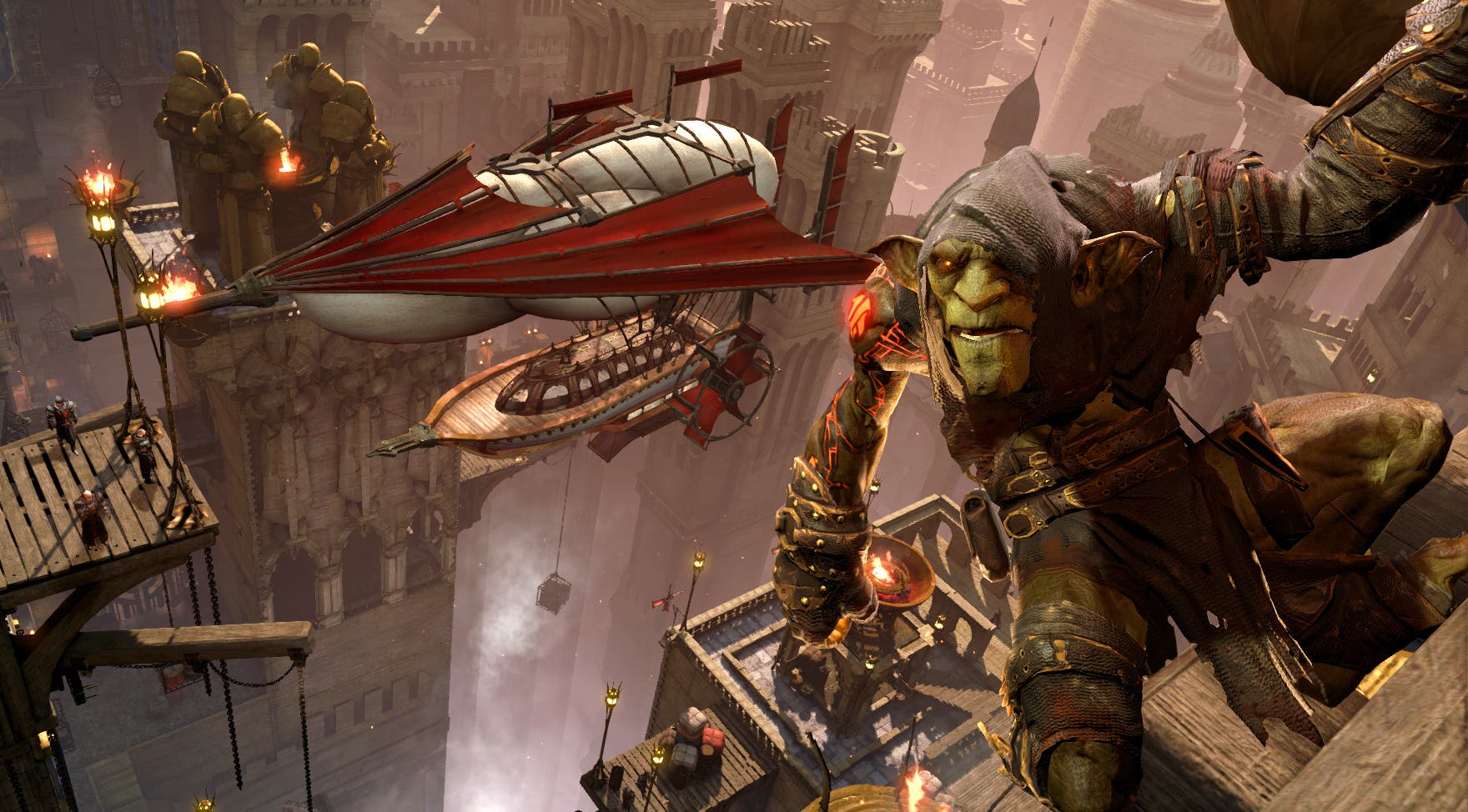 Amber is the thing that Styx is after, yet he carries vials of it with him? It kind of loses itself with that contrivance. Besides that, the amber within him glows when in darkness, and dissipates when you can be seen. However, this gauge is somewhat broken and unreliable as when I was fully lit up to show I was in shadow, enemies were still able to see me, when I wasn’t even moving. So why that even matters is beyond me.

The amber you consume is able to do many things, but most importantly lets you create a clone of yourself. Initially, your clone can squeeze through tight spaces and open doorways inaccessible by Styx normally. Later on, clones can be used to hold enemies, explode to provide a paralyzing gas for Styx to take down enemies, or simply slip by unnoticed. Amber can also be used to make you go invisible and allow you escape. 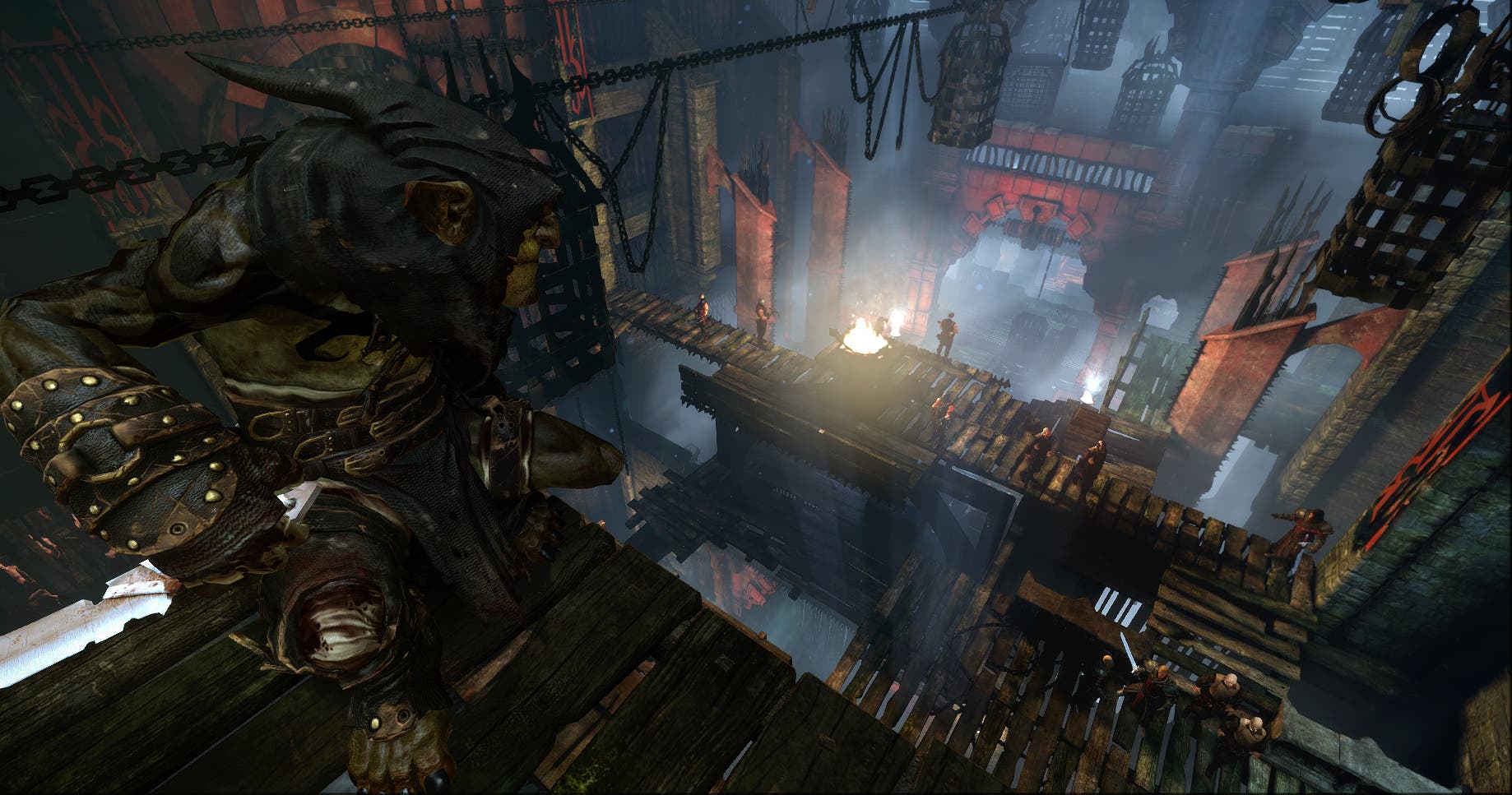 I became quickly frustrated at the game by its problems and shortcomings. The first hour or two of Styx will be the most infuriating, as you’ll have nothing to call your own. Completing secondary objectives has a meaningful reward. Not only do you often collect relics to showcase at your hideout, you’ll earn more skill points over just completing the primary objectives. The secondary objectives take you out of the way and increase the length of time you’re in a level, but are crucial if you intend to ease the frustration.

Only at the hideout that’s accessible between missions, was I able to invest in skills that enhanced Styx. And ultimately, the skills made the game more enjoyable. Skills range in a variety of categories: Stealth, Agility, Cloning, Amber, Equipment, and Assassination. Each has their own benefit and allow you to customize the way you intend to play the game. For me, stealth is an obvious choice that reduces the sound you make when moving around, and it will make your life easier as you play. 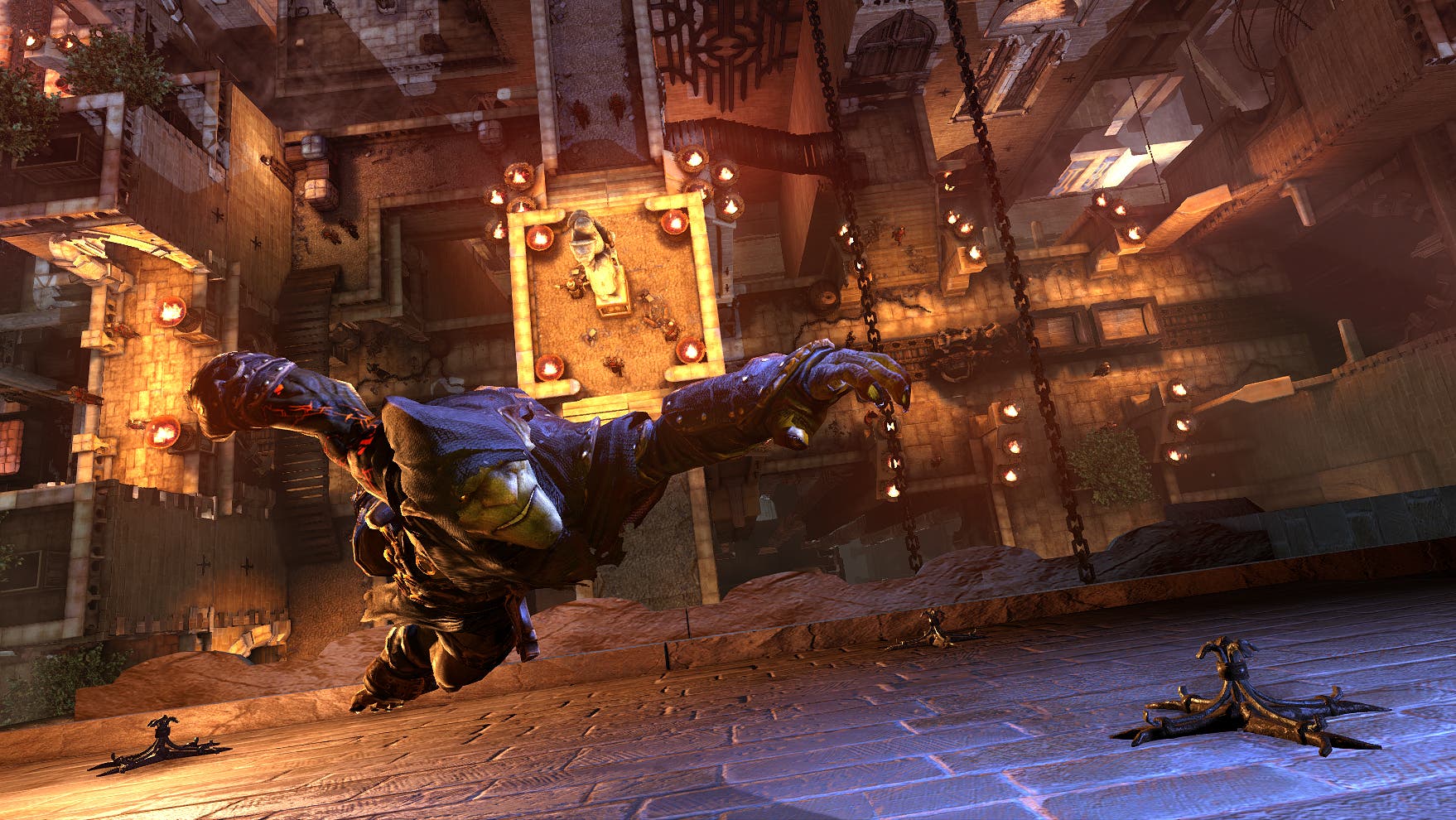 As the “Master of Shadows”, you can extinguish flames of light with sand, or by doing it yourself. Doing it yourself is a bit of a risk, as during the animation, you can be seen by any number of guards. Over time, you get access to more tools like throwing knives and using acid to disintegrate bodies of those you’ve killed if there’s no good place to store their body, or throw off a ledge.

Muffled kills are essential, they take longer to complete, but your chances of alerting any nearby enemies is almost non-existent. Landing on rugs, will reduce the noise you make, becoming the perfect assassin. When not being perfect and are seen, you can often find the nearest chest, locker, or table to hide under. Whether intentional or not, you can even knock over chairs while making your way under a table, which will alert enemies and likely need a reload, is kind of fun with the way the physics work. 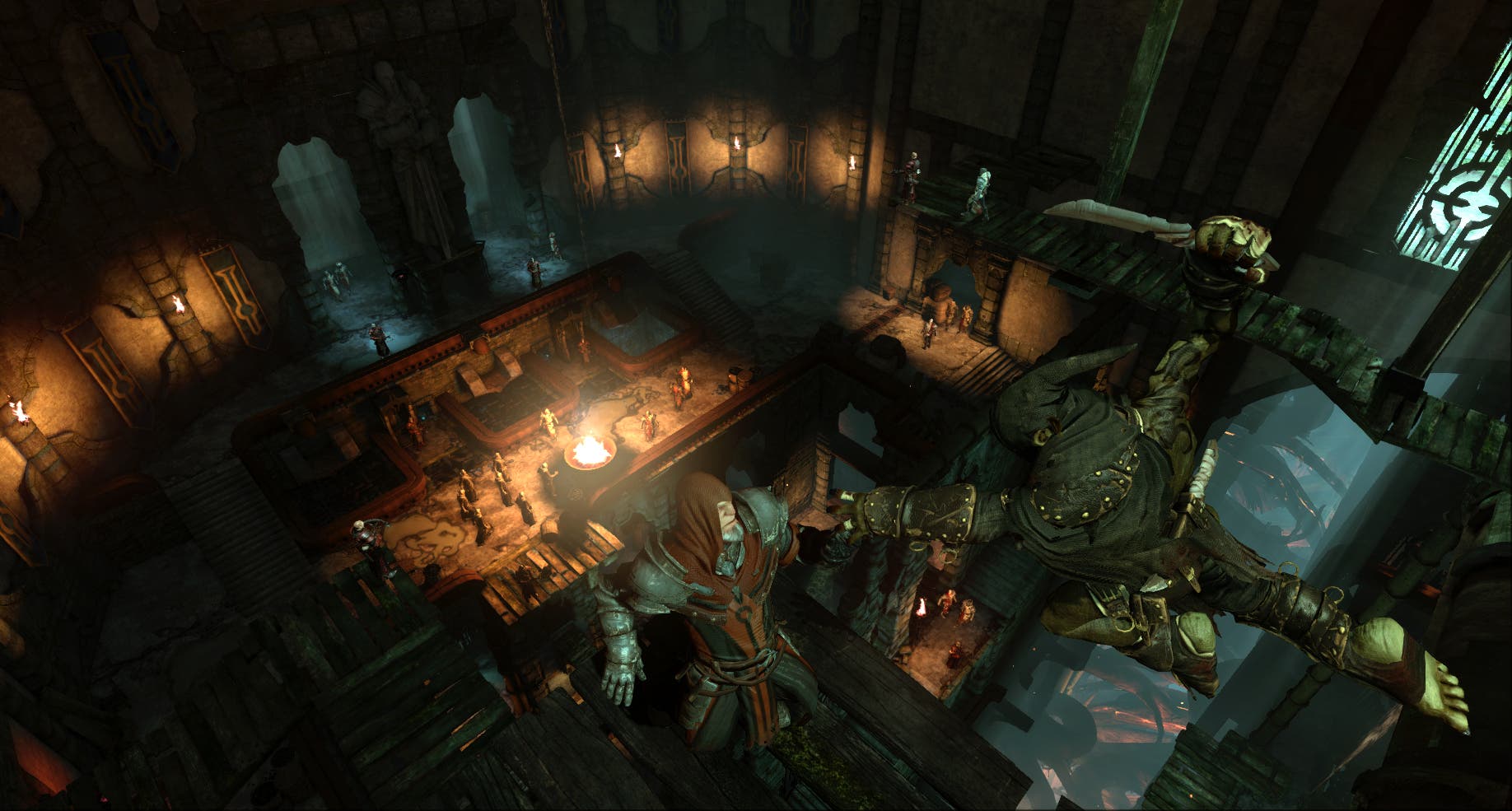 This game is releasing on PC, PS4, and Xbox One but often looks muddy and like a last-generation game, which it’s entirely possible it started this way, but it just isn’t visually appealing. Everything looks flat and washed out. Characters look especially bad. Shadows are exceptionally dark, almost too dark where you’ll have to up the gamma for you to navigate. Now, you can use a power of Styx’s that is a horrendous red infrared view that highlights certain areas and allows you to temporarily see in the dark. But beyond that, there’s nothing pretty or engaging about the art direction of Styx.

It also is surprising at how segmented the levels are. Again, for a title debuting on “next-gen” platforms, one single area is broken up into three or four stages. There’s absolutely no reason for it. You never leave the tower, as it is all interconnected. It really seems this game was built for the Xbox 360 and PlayStation 3, and some concessions for the older systems were carried over and not fixed. It’s not the worst thing in the world 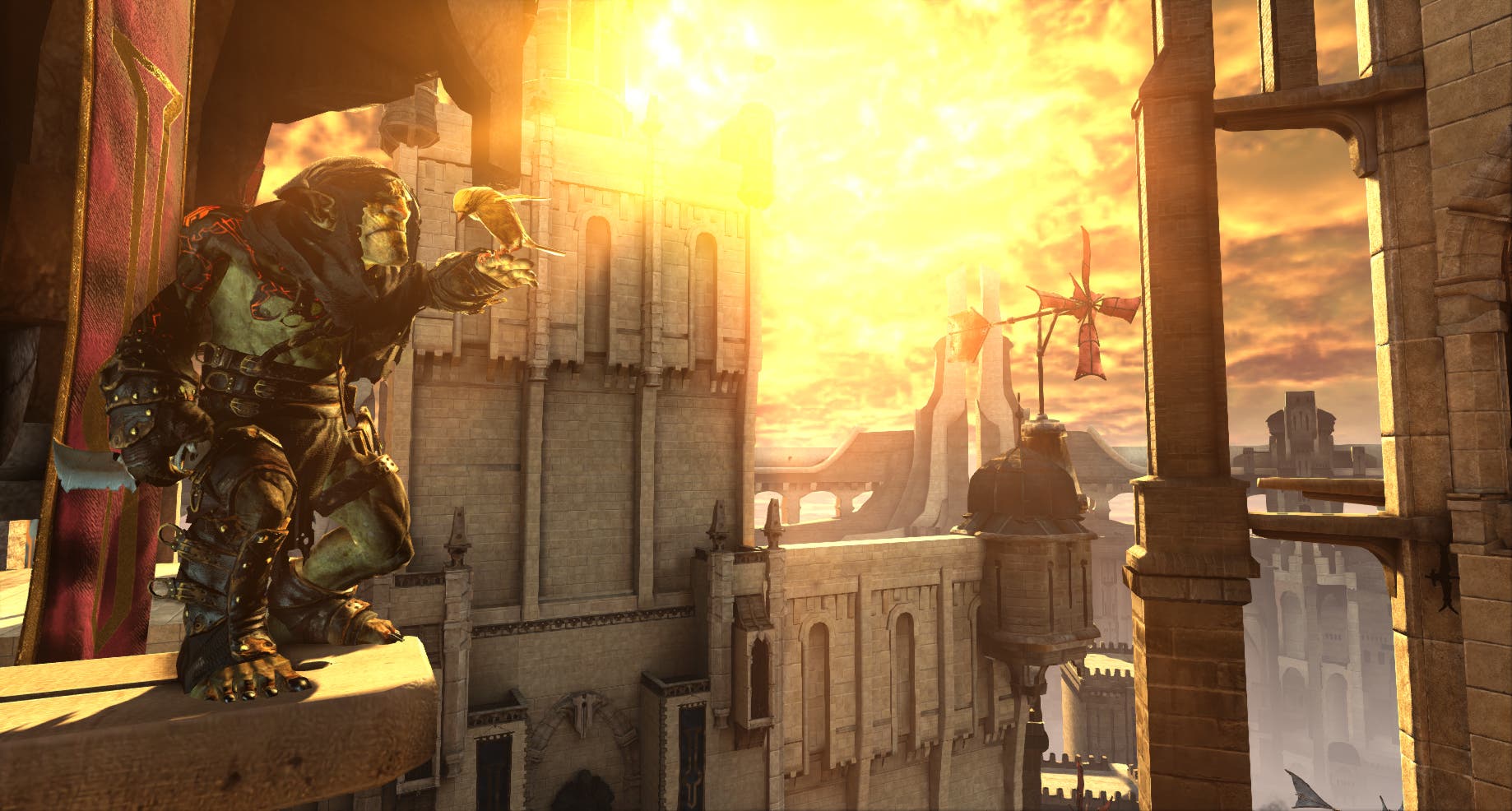 Styx: Master of Shadows may be ugly, but so is Styx the character. Both are rough around the edges, but underneath lies a core stealth mechanic that is incredibly solid with a highly enjoyable character that’s fun to listen to during the game and ensuing cutscenes. It’s just a shame that everything surrounding the wonderful stealth is so hackneyed and uninteresting.