Sledgehammer Games' first entry in the Call of Duty franchise is the freshest that the series has been in quite some time. It shows that even the every-other-year trade-off between Infinity Ward and Treyarch has caused some burnout. With a new pair of eyes looking at the series, many changes have been made, and all for the better.

Sledgehammer Games’ first entry in the Call of Duty franchise is the freshest that the series has been in quite some time. It shows that even the every-other-year trade-off between Infinity Ward and Treyarch has caused some burnout. With a new pair of eyes looking at the series, many changes have been made – and all for the better. 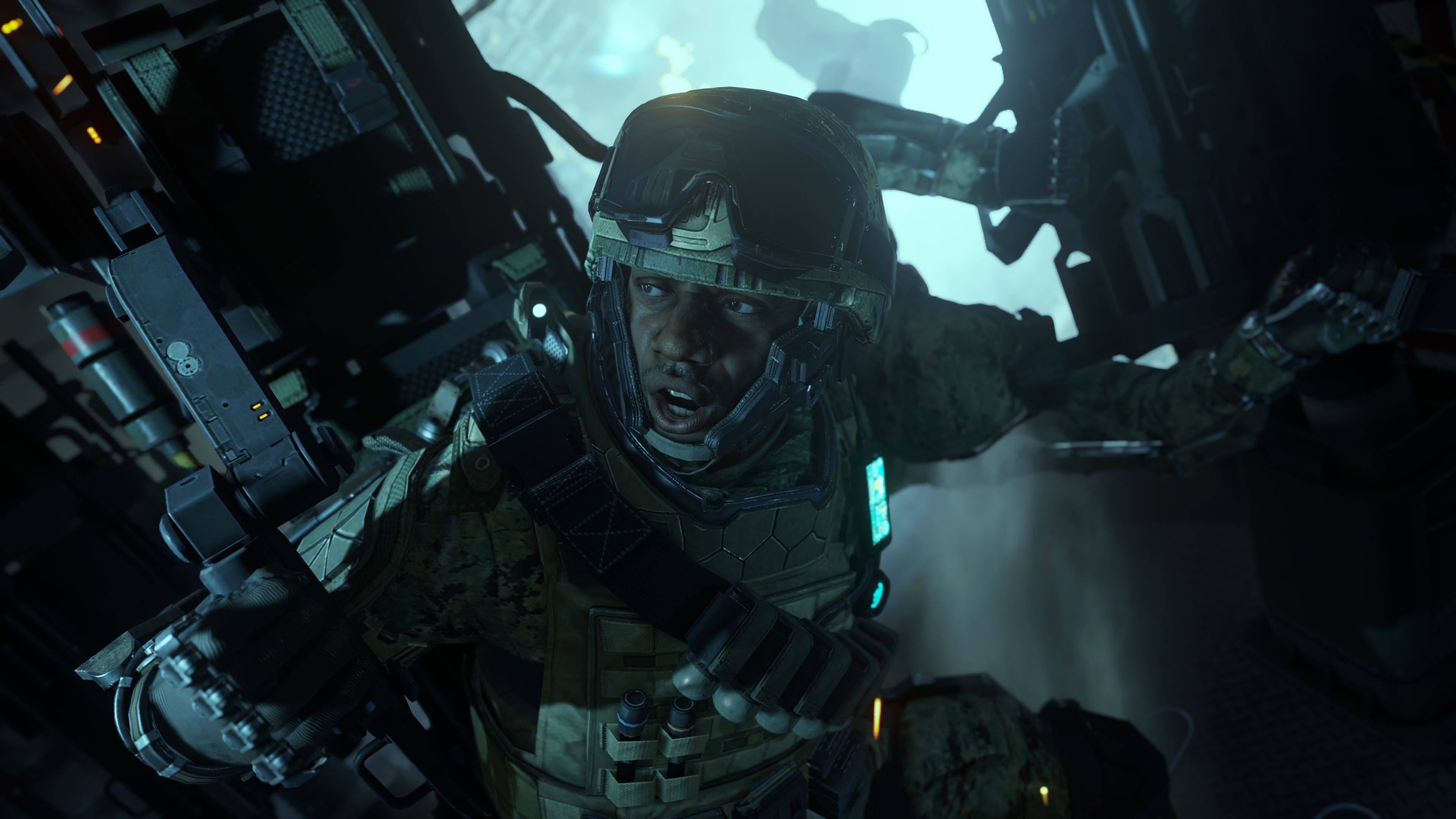 It is clear that Sledgehammer has played both Treyarch’s and Infinity Ward’s Call of Duty games, and was able to extract the very things that made them unique and special. The entire game is reminiscent of Call of Duty 4, Modern Warfare 2, Black Ops II, and even World at War. These are not bad things, though. As each game has many positives, this sets a foundation for Advanced Warfare that honors the series’ history while bringing in new elements to enjoy.

Eschewing a series standard for the first time, you play as only one protagonist by the name of Jack Mitchell the entire way through the roughly six-hour campaign. It’s not revelatory or ground-breaking, but the series from the very beginning with Call of Duty in 2003, the single-player campaign has always featured playing through multiple set of eyes. This shows the focus of Advanced Warfare‘s campaign.

Voiced by Troy Baker, Jack Mitchell is a stand-up guy, who suffers a tremendous loss at the beginning of the game. He’s given a second chance by Atlus, a Private Military Corporation. He comes in contact with other characters, namely Gideon who is his mentor and friend. Many will find similarities Modern Warfare‘s “Captain Price” here. Sadly, there’s no real care for any of the other characters. Mitchell’s interactivity in the story besides shooting, is being tasked with manning a console, opening a door, or other mundane tasks to give you semblance of inclusion. Other times the game is smart about it: you’ll hop over a doorway, expecting to have to open it for your squadmates, but they just hop over it with you. 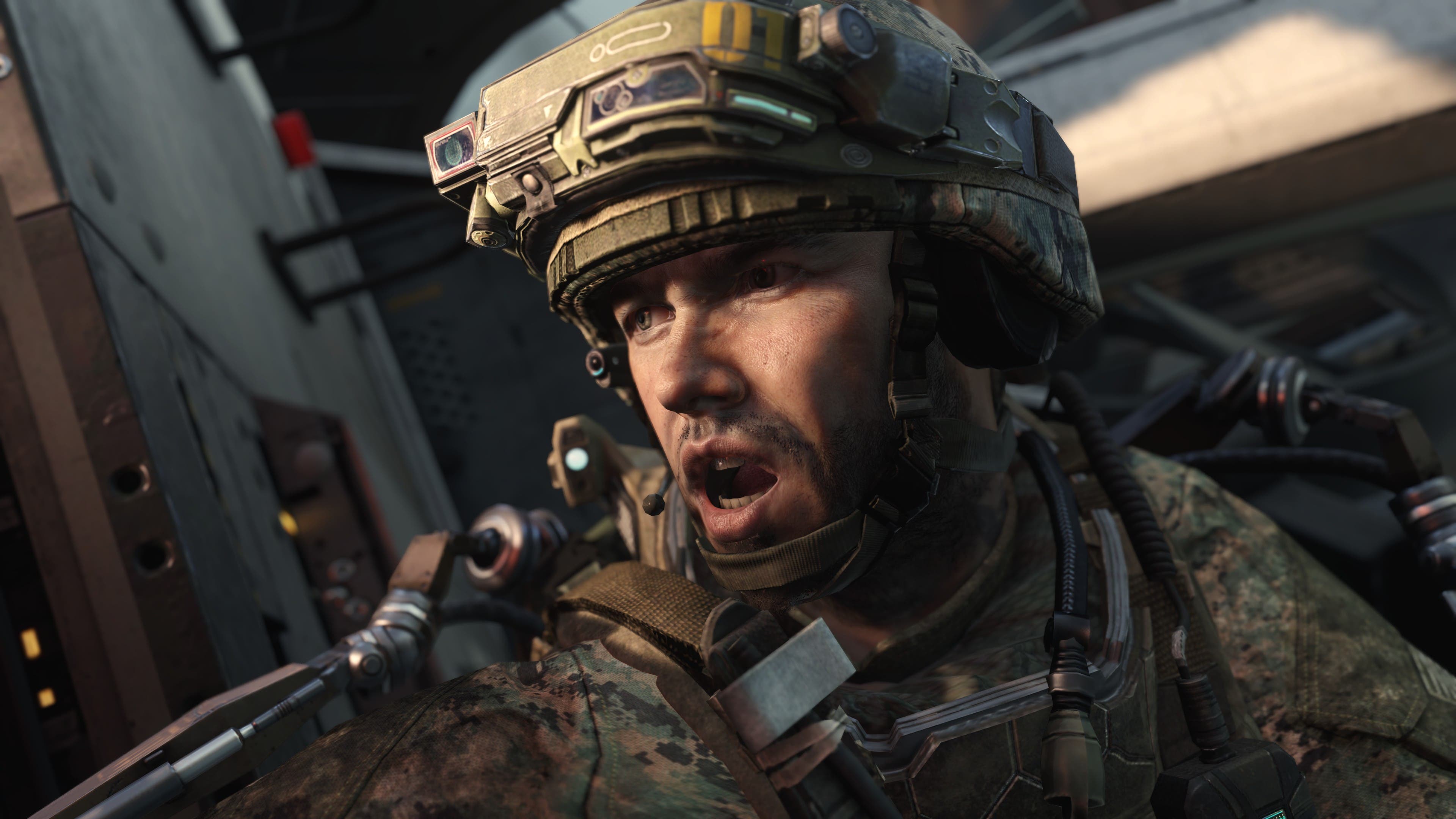 Instead of going for shock value every few levels, Advanced Warfare is a plausible future scenario in which Private Military Companies (PMCs) vie for being the ones to push forward the technological advancements of war, and bypass the United States Government. It’s something that’s seeming right around the corner with today’s military climate.

This is where Kevin Spacey comes in. And he’s clearly Kevin Spacey, but he adds believability and conviction to his role of Jonathon Irons, the head of Atlus, the leading PMC. He despises democracy and everything it stands for. I don’t believe anyone else in this role, famous or not, could have pulled it off, or been more convincing in the way Kevin Spacey is. And his role here is important, and not just a famous name to lead the credits (which his does). 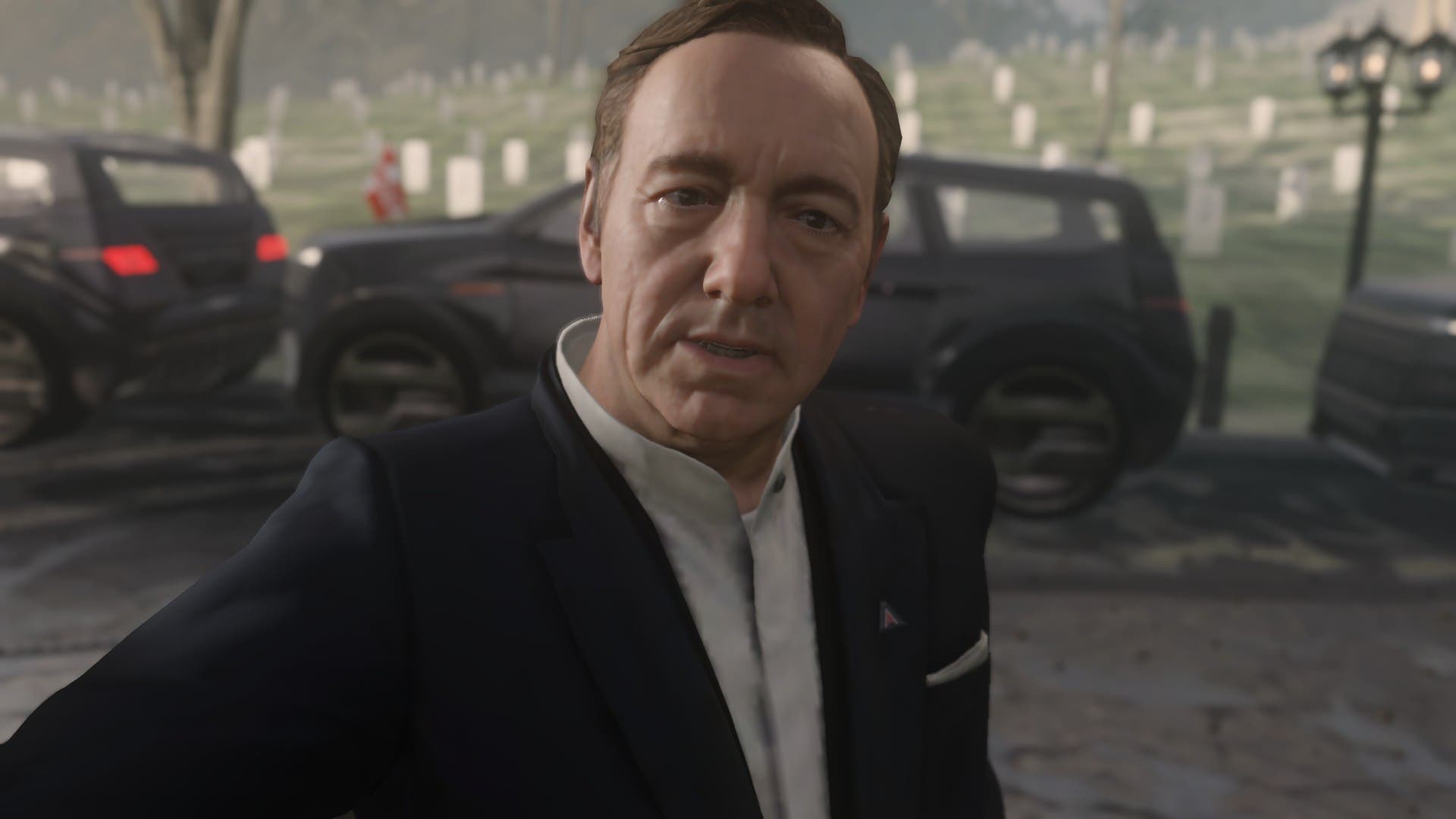 A major change that is across all modes of play is the Exo Suit, adding an incredible amount of mobility for player movement that the series has desperately needed. While Call of Duty is not a slow game, it’s had a deliberate pace in walking and running. Now being able to perform a jetpack-assisted double jump, strafe sideways, and even forwards and back when airborne, this minor change can get you away from the blast radius or out of a doorway to ensure your safety.

As each mission progresses, you’ll also earn upgrade points that can be spent to improve your exo suit’s abilities, or buff your durability in combat, or just make it easier to aim down sights. This progression is saved, so that replaying the campaign on harder difficulties becomes more attainable as you’re more resilient. This doesn’t carry over beyond the singleplayer, but it’s not to feel stronger as you go. 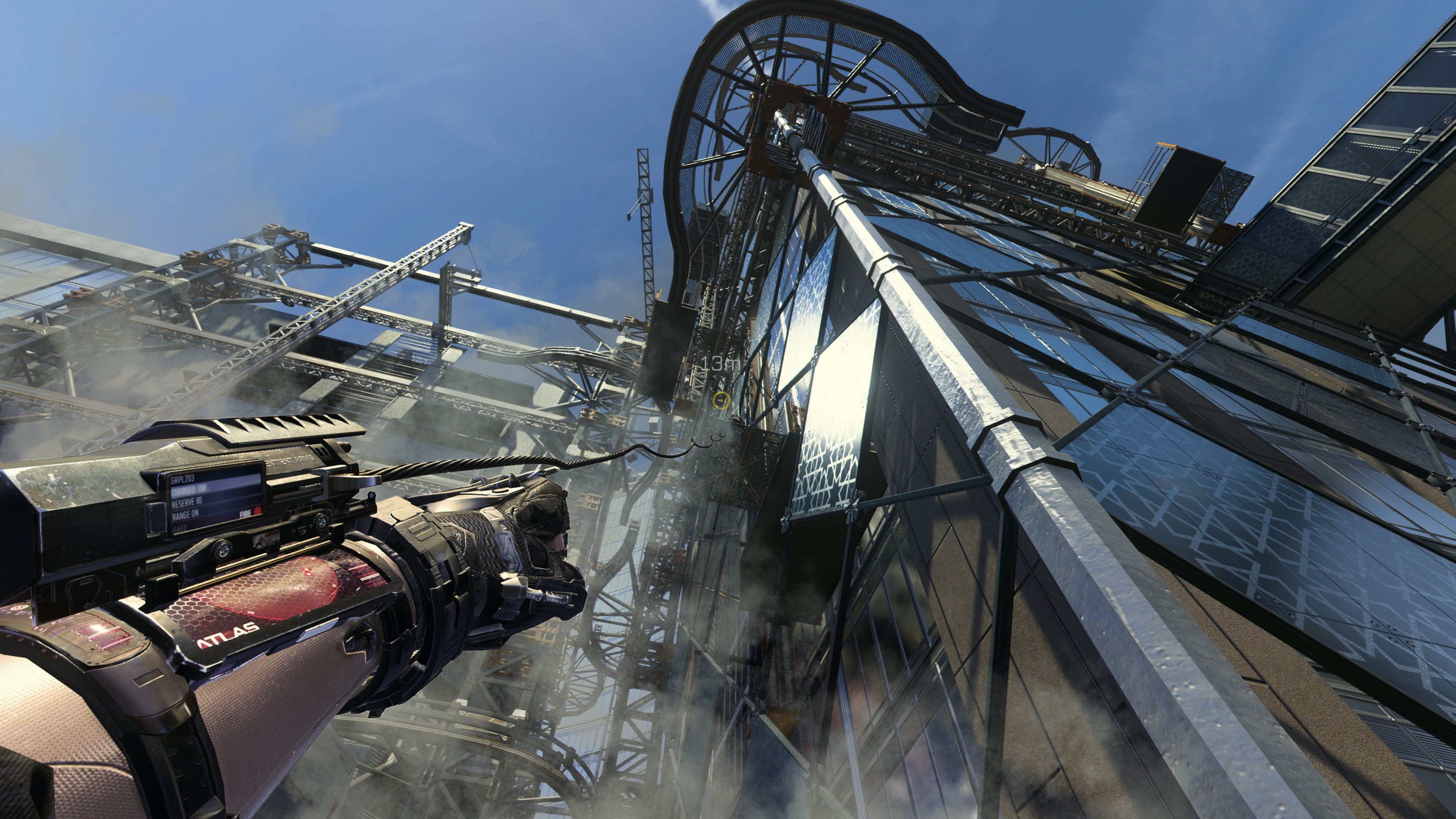 Akin to Treyarch’s Zombies mode, Exo Survival is a wave-based survival mode that’s highly intended for co-operative gameplay. As you last longer and longer, you’ll earn upgrades and can modify your exo suit’s abilities. You can even purchase new guns and have access to higher tier equipment. Pretty standard and pretty entertaining. Objectives change on-the-fly where you’ll have to defend an area for a period of time. This breaks up the monotony, but isn’t all that engaging.

I’m still a fan of Spec Ops, and wish a variant of that would have made its way into Advanced Warfare, but Exo Survival is the best thing for teaming up with friends in order to avoid hearing random voice chatter from children who are clearly unable to purchase this game on their own. 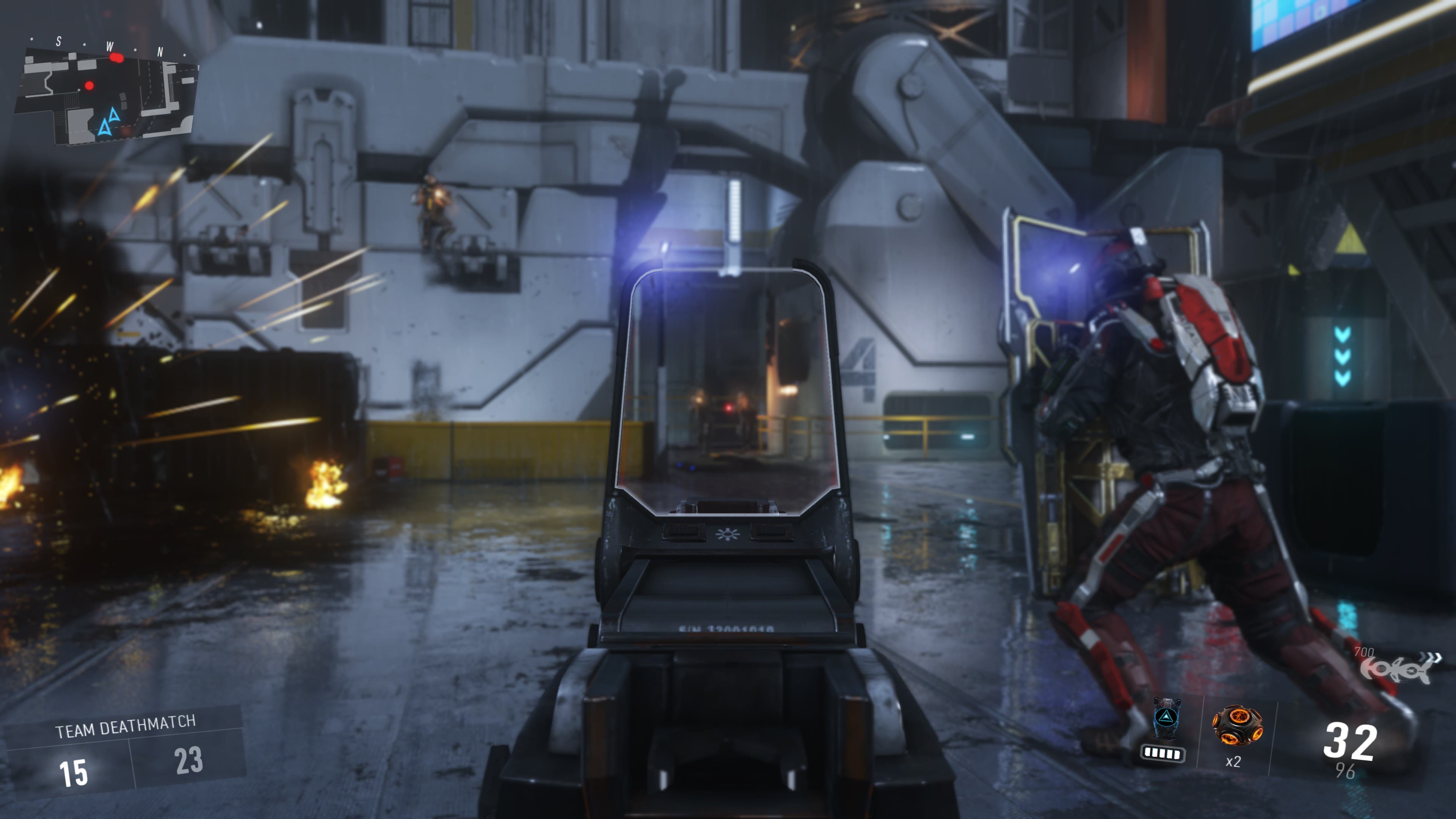 By now, you know what to expect: Shoot, kill, die, repeat.

Borrowing from Black Ops II, the “Pick 13” system now lets you choose from an array of options. With thirteen slots, you can double-up on primary weapons, take on four scorestreaks instead of three, or have nothing but a combat knife, running around slicing dudes like an idiot. Nearly everything you do earns experience that ranks you up, get rewarded with weapons at a set level, and unlock more perks to further customize to your playstyle. This is all familiar ground, but a lot of it has been reworked in ways that make sense.

Weapons are largely the same as their modern counter-parts, but just with new names and altered designs. The standout weapon in all of this is the laser gun, which shoots a concentrated beam from this rifle that is probably OP, but lots of fun to use with many disadvantages from using it when there are multiple targets. There’s a low weapon count, and scorestreak count to keep things from feeling overwhelming or becoming unbalanced. 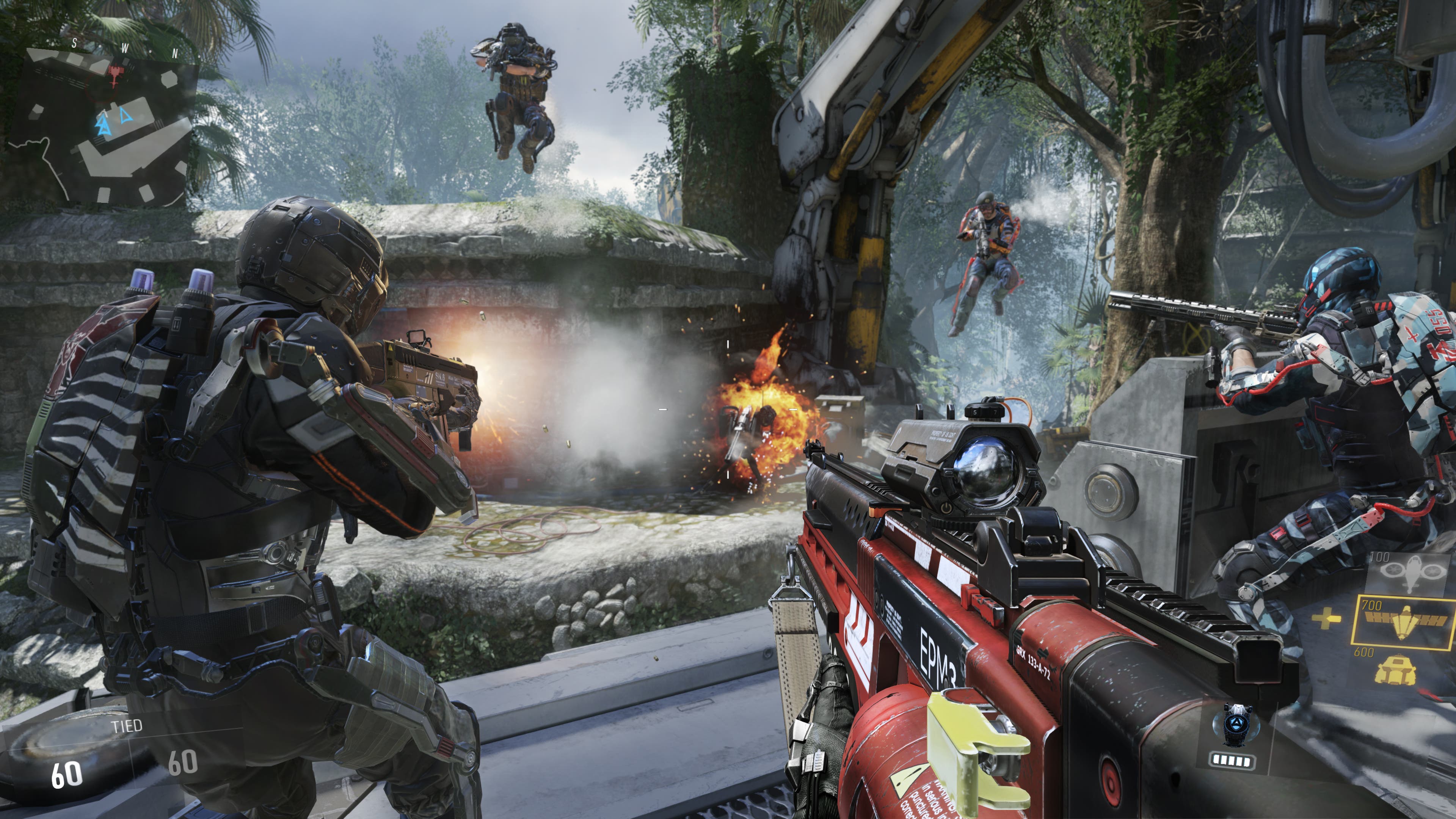 Even during the campaign, but earned in multiplayer is the ability to earn Supply Drops, which are random boxes of goodies containing aesthetic clothing, or weapons for dispatching humans into lifeless virtual corpses with varying statistical attributes. Supply Drops can contain different colored items of loot: Enlisted is blue, then Professional is green, and then Elite-tier is colored orange.

Customizing your Operator is only that of one character, unlike the ten odd, confusing character slots that Call of Duty: Ghosts offered. Operator outfits, it’s not for me to see, but makes feel less like a clone when in multiplayer. Armor is where Supply Drop items are stored, and any colored items can be converted to XP if it’s a weapon that doesn’t have a statistical advantage, or anything you’d make useful. And since you can’t trade with any other players, putting it towards player progression is the best way to go. 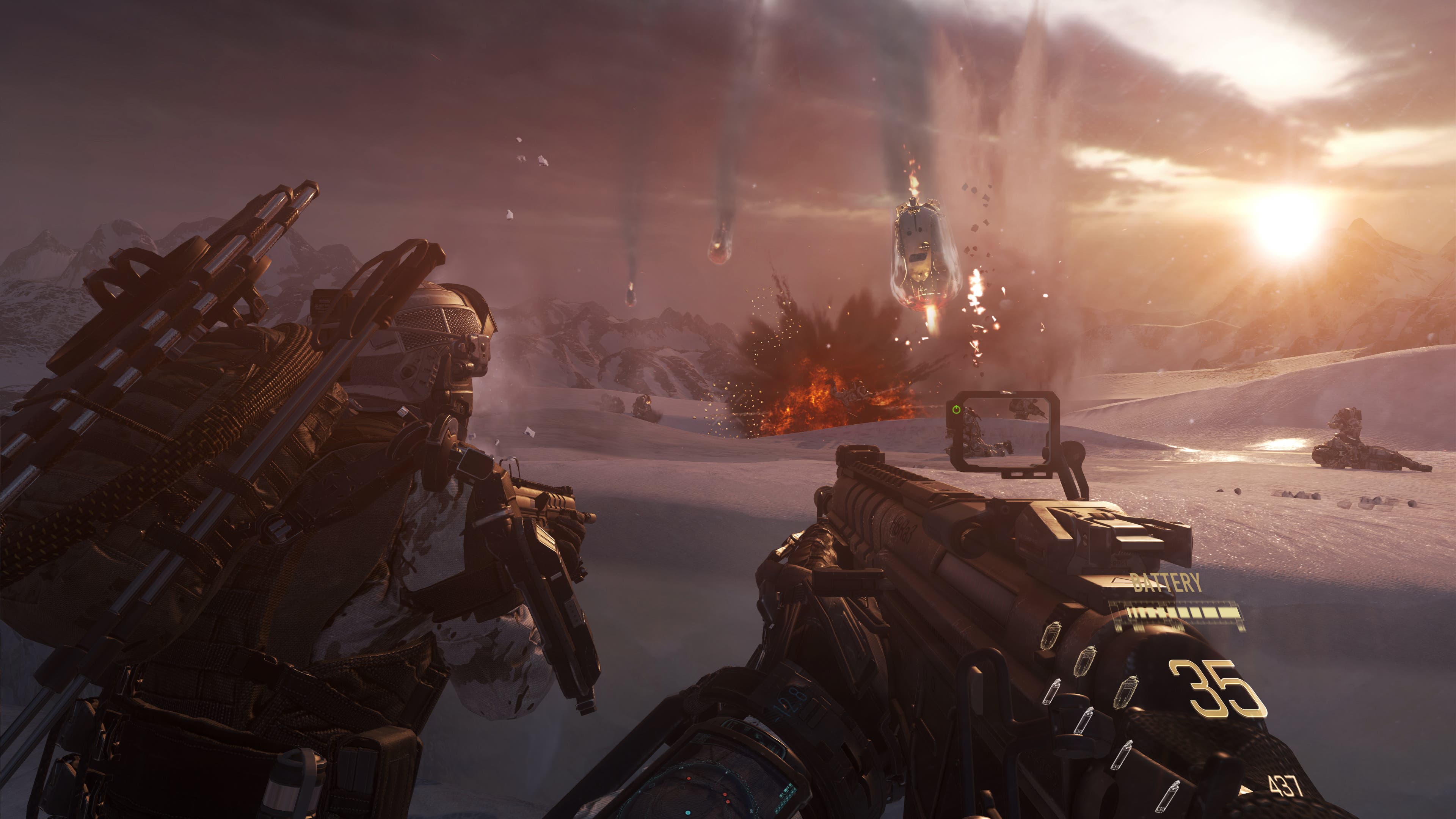 Call of Duty: Advanced Warfare is the best Call of Duty has been in recent memory, and with “Warfare” in the title, will be reminiscent of the monumental and important changes that Call of Duty 4 and Modern Warfare 2 brought to first-person shooters. And while it doesn’t quite hit the same mark, the presentation and quality of Sledgehammer’s first entry is one that will make any other Call of Duty by name after this, pale in comparison.