This War Of Mine Review

Robert E. Lee once said, “What a cruel thing war is… to fill our hearts with hatred instead of love for our neighbors”. While this referred to war between the North and the South of the Civil War. The same can be said for civilians when put in an impossible situation, torn apart by the things they can’t control. This War of Mine is a touching, if not heart-breaking tale of survival that evolves through your actions, or inactions.

The focus of this war game has nothing to do with shooting hundreds of enemy combatants. It focuses on the struggles that civilians have to endure in a war-torn city. This War Of Mine explores that by placing you watching over three strangers, brought together by this uncontrollable circumstance. In my game, I started with Katia, Bruno, and Pavle. All normal people, looking to find their way back home, find loved ones, or reunite with their families. Simple goals and reasons to keep living, but it is not easy to get through the day-to-day.

The initial shock affects you as it does them. The three survivors must scavenge a house (your new home), to get through the day and prepare for the night. During the first day, you have to build beds for people to sleep, as well as workshops to build weapons and traps as well as kitchens from the materials found during scavenging. None of this is told to you, but it is apparent to anyone’s who has played a survival game in the recent past. At nightfall, I put the sick one to sleep in a bed, left one as a guard without weapons, and the last one scavenged other people’s home for more food and supplies.

You can choose where to scavenge, and each place will give you basic information about what you’ll find, whether there’s lots of food, supplies, or even potential danger. The choices are yours, but you know the “good stuff” is protected by those with guns. Each time you go to a place, you truly never know what you’re walking into. For instance, going to the supermarket for the first time was very risky. When I arrived, there was a group of armed men talking, and then they split up. One walked straight towards me, but instead of shooting or scolding me, just told me there was enough for everyone and let me on my way. The others weren’t so trusting, but didn’t stop me either.

Once I was inside, left-clicking will stealth your way through a room. Or you can right-click to run, which produces sound, and emits a radius in which it can be heard. A vision cone shows your line of sight, which is clear for what you can see, and blurry for what you can’t. If you leave a door open, and whoever is inside is patrolling, will be alarmed to see it open and start investigating. Most home invasions you perform do not have hostile homeowners, but rather plead and beg you not to take their stuff.

Other places may shoot you on-sight, or simply tell you to leave. With a press of a button, you can send your scavenger home, who will run out of the complex. Other times, you can just walk out, time permitting. 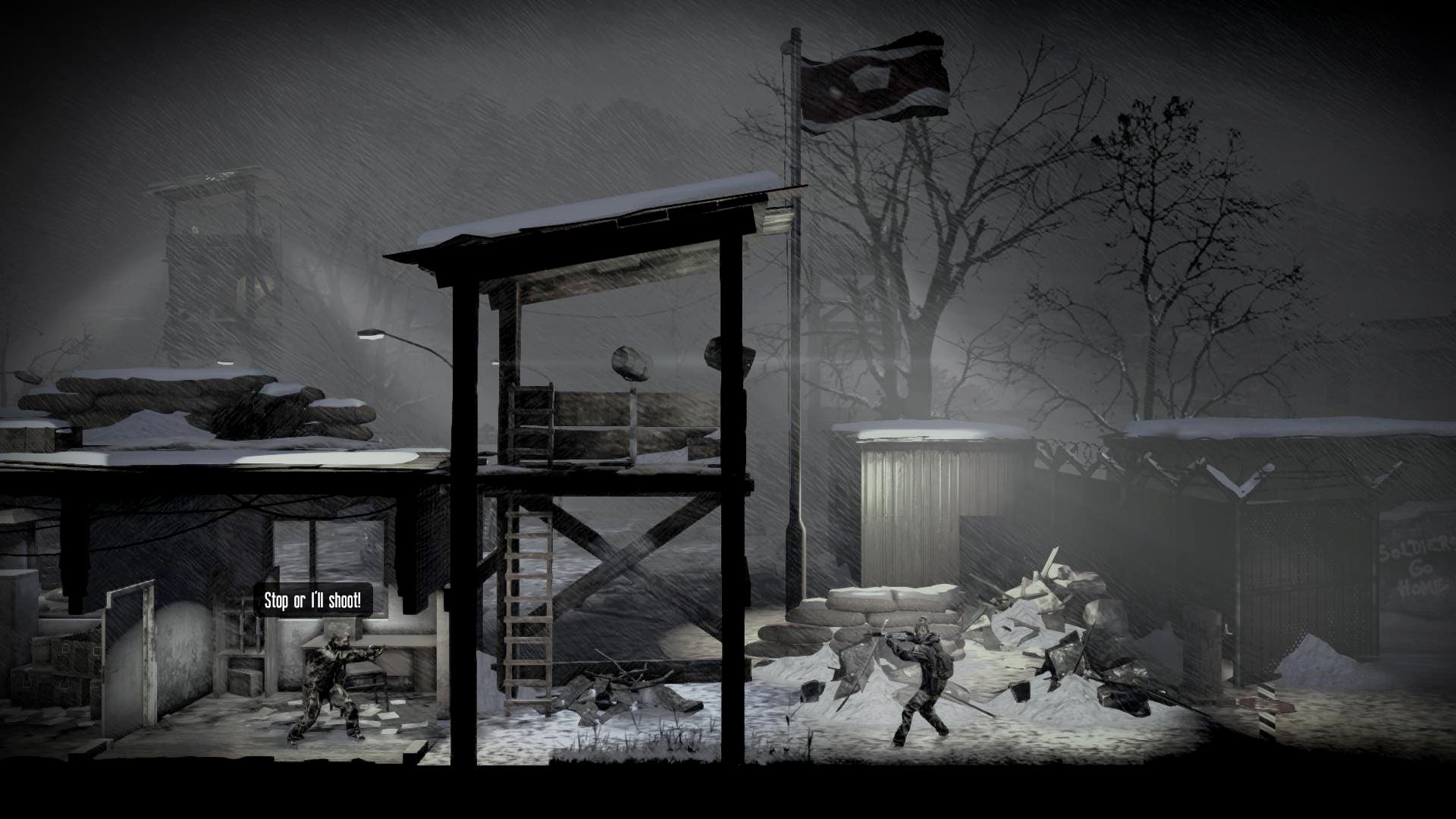 The near monochrome look reeks of sadness, despair, and often times, desperation. War is hell, and it takes a toll on the ones directly affected by it. After doing a home invasion, the others in our refuge were saddened to hear what I had done. They wouldn’t eat, they wished I hadn’t taken things that weren’t mine. But if I hadn’t, we couldn’t have gone on. And later, as the days wore on, those feeling subsided and the more home invasions I performed, the more they understood the need. As especially I didn’t hurt anyone to get them.

The scavenging part is a bit lacking. You can only take one scavenger, for reasons I can understand. But to bring two, would create greater risks, but also produce greater rewards. While you may be rummaging in different locations, you’re doing the same types of things over and over again. The parts you find are generically labelled, that help make stoves, filters, cigarettes, chairs, beds, etc. But finding the “samey” types of materials felt repetitive.

Every couple of days, travelers will come to the door knocking. This is where bartering comes into play. If you have too much of a certain material, you can trade for something like bandages or medicine for sick or hurt members of your group. But these items come at a heavy premium, often requiring A LOT in order to get just one of those precious items.

As night falls, and while you’re away scavenging, bandits or raiders can conversely come to your home and do the same. If your group is well-armed, they can stop the intrusion. If they are both sleeping or not able to defend themselves, you will lose many resources that you’ve worked so hard to secure. 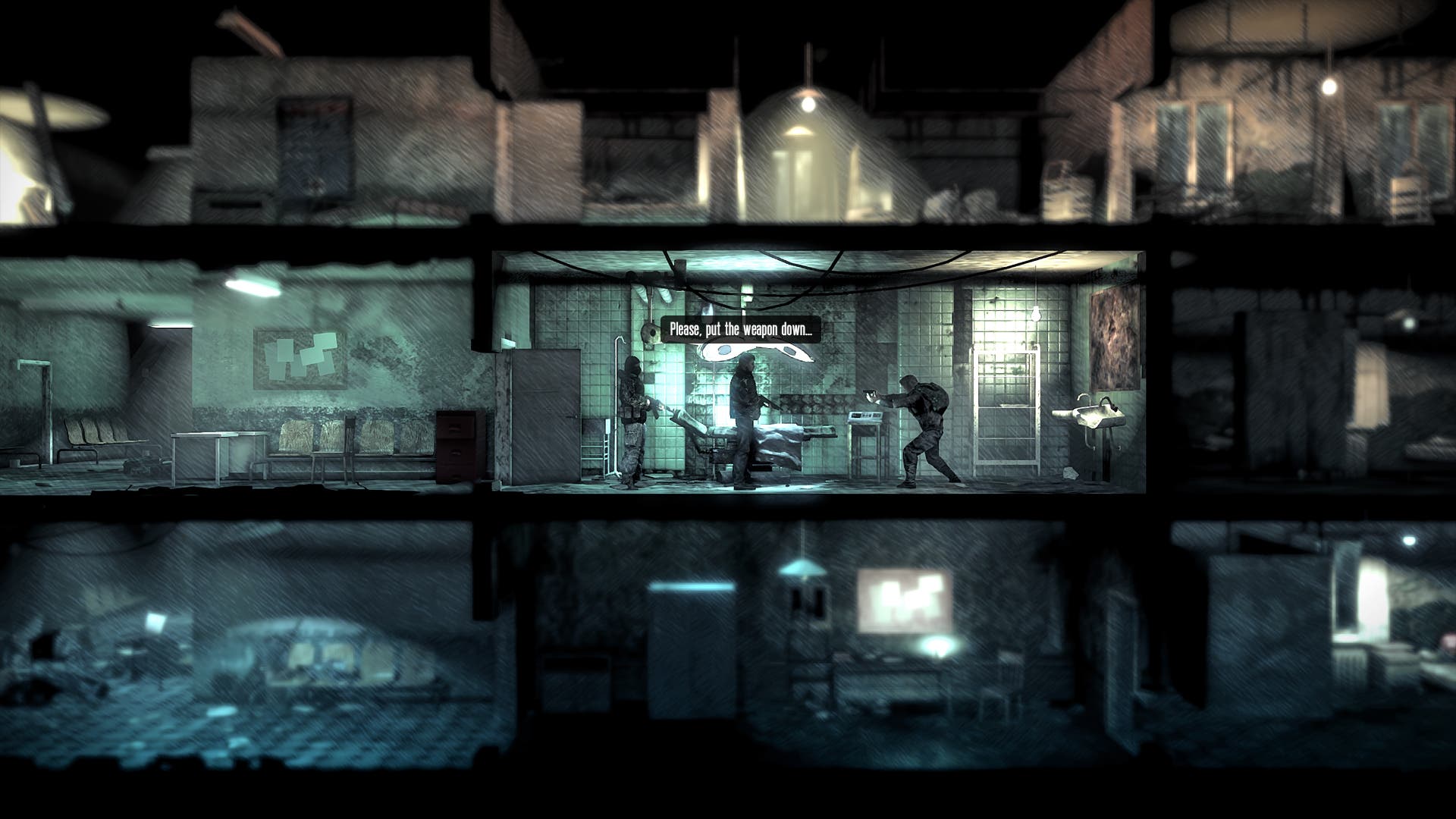 Remorse and guilt hangs heavy in This War Of Mine. Killing your fellow man out of startling them just trying to survive another day can be disastrous to your group. And even just rifling through an elderly couples things was enough to send my group into disarray.

With each home invasion that happened to us, affected the group greatly. Depression even sank in at one point, so that no one was compelled to leave the home. Everything is a struggle, all the time. Nothing is ever handed to you and things get grim, fast. Decisions must be made, like making the wounded one sleep in a chair so that the sick one gets a bed is heart-wrenching. For those who like to trap their Sims creations in four-walled rooms, might find themselves right at home with This War Of Mine. 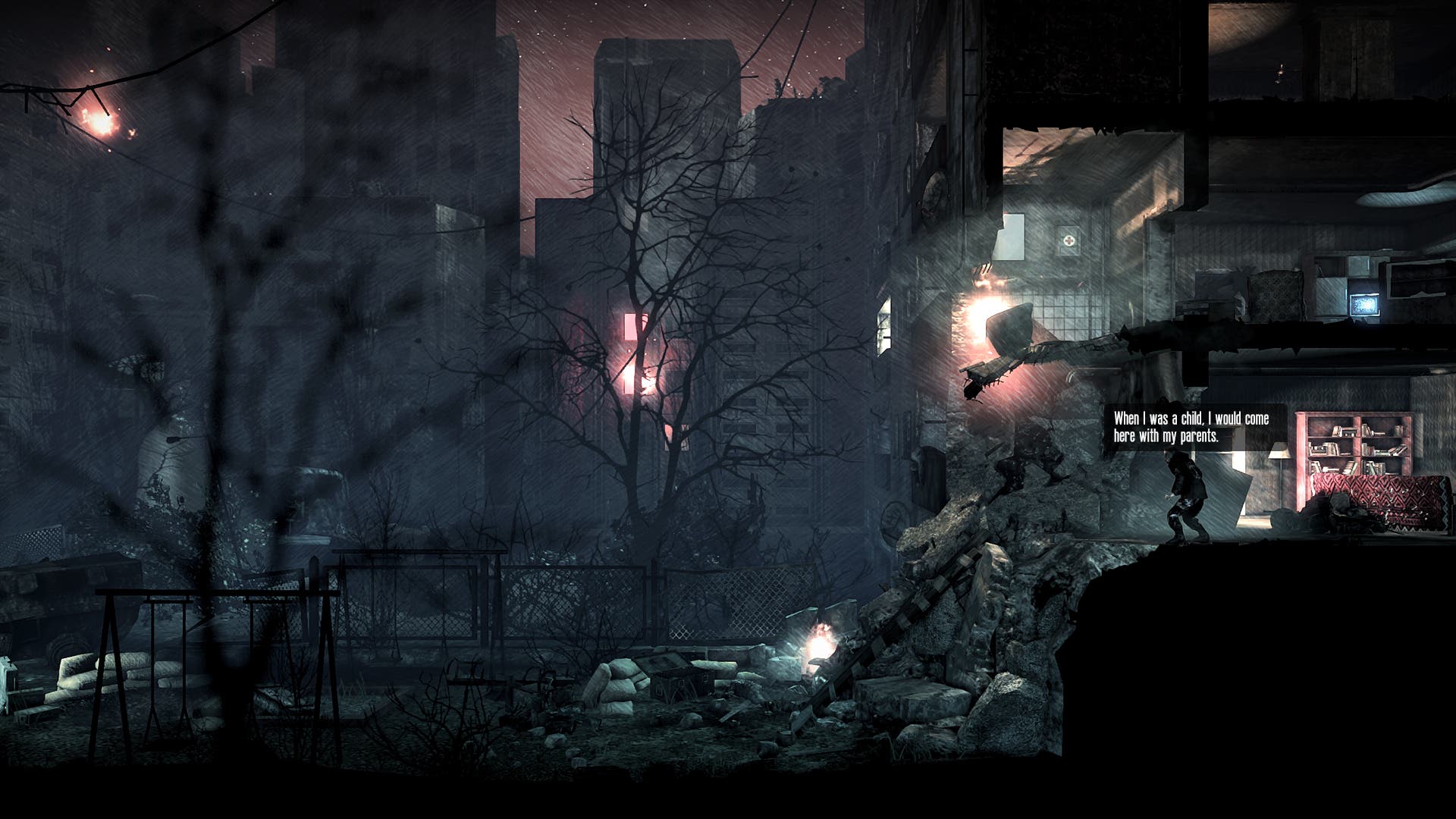 There’s unfortunately no manual saving. Saves take place at the beginning of each day, as your scavenger is returning with all their spoils. Again, this another thing the game does not tell you. I assumed, it saved every time you quit and had lost changes and preparations from the day when I loaded it back up. An easy hump to get over, but one I didn’t need.

The game takes it, and you should take it day-by-day. If you fail, you have to start over. But there’s a sense of trudging. For no fault of the game, it just feels like you’re barely getting by on scraps, and you’re eeking small victories from scavenges. This is really no way to live. And thus, the game has taught an important lesson on humility. I began to respect and understand the struggles, and also view and really appreciate the things and people I do have. An affect very little games have ever had on me. 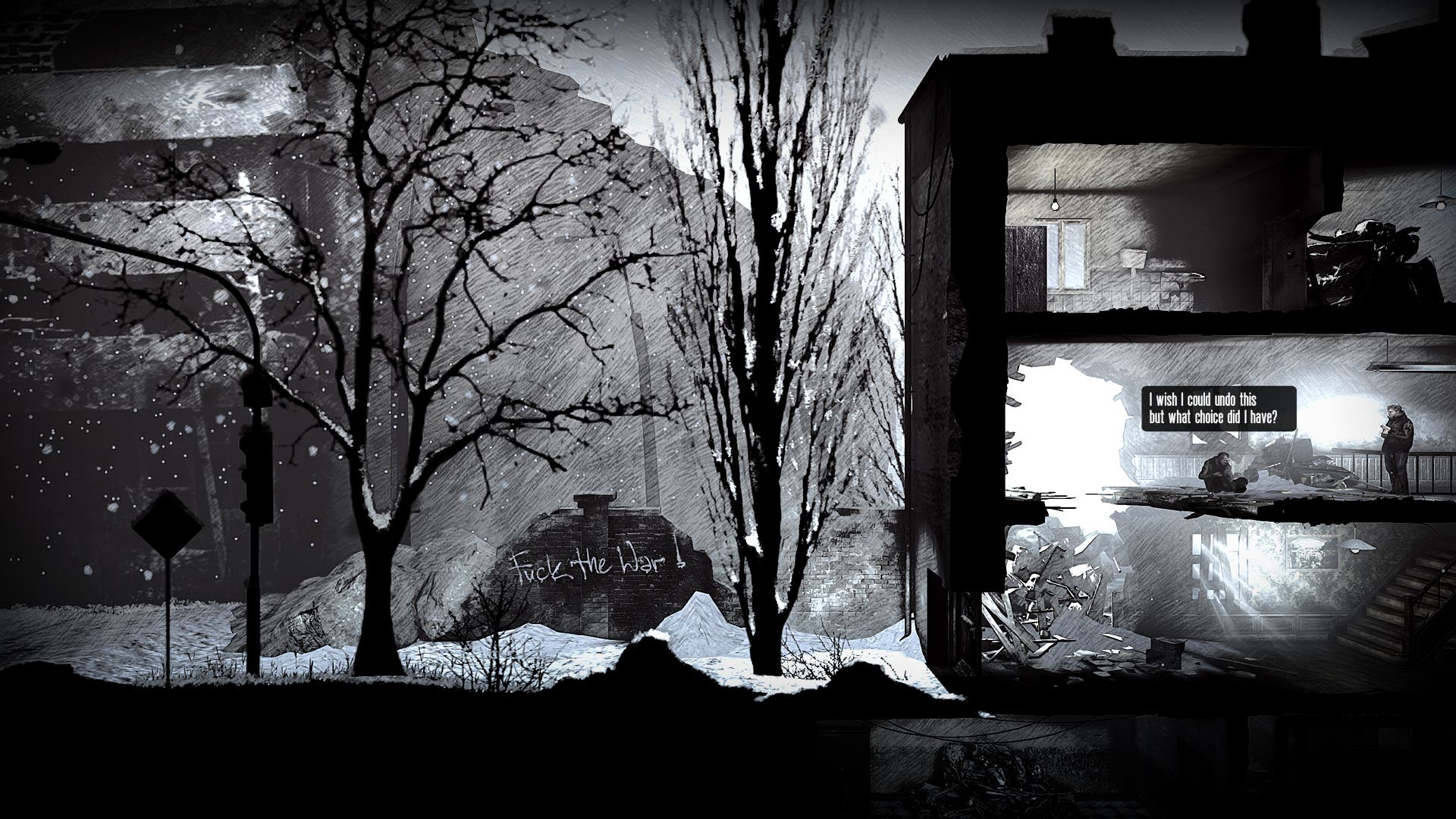 This War Of Mine is not a “happy-go-lucky” game. It is not entertaining, at least in the uplifting sense. It is challenging and strategic in ways survival games have only come close to doing, but not to these emotional degrees. And for that 11 bit studios has succeeded in having me care for the strangers I was controlling, and when you fail, they fail. Starting over then means you’ve learned the lessons that were taught to you, and will have you working smarter to hopefully see the end of the war.