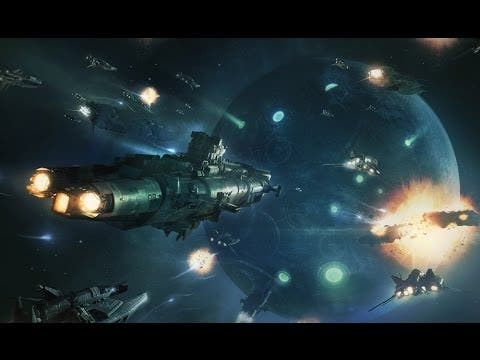 Star Conflict update brings the Age of Destroyers in version 1.3

StarGem Inc. and Gaijin Entertainment’s epic free-to-play MMO action game, Star Conflict, announces an exciting addition to ship classes today with the introduction of destroyers. Beginning January 14th Star Conflict players can add destroyers to their offensive capabilities.
Destroyers join Interceptors, fighters and frigates as the fourth ship class available to players. Destroyers may be a slower ship class, but what they lack in speed they make up for in firepower. Powerful guns adorn both sides of this giant, giving them all-round offensive and defensive capability.

In addition to their awesome firepower, destroyers have many special modules, each of which possesses a special skill. For example, the Black Hole generator can create ominous black holes that around the battlefield. The Destroyer uses the black hole to ‘hyper jump’ to different parts of the battlefield, creating distance, thereby gaining tactical advantages over much faster and highly maneuverable ships like interceptors and fighters.

On top of the introduction of the destroyer class, players will receive new types of maps – Leviathan is a giant space station where pilots can fight deep inside cavernous halls and navigate through narrow passages, as well as outside of it. Nordstar Crash is an asteroid with the remains of a Nordstar dreadnought in the center of it allowing players to fly above it, around it and set lethal ambushes on rival players. Ambrosia-VII Factory is an abandoned factory on an asteroid. It is a hostile environment of rivers of lava, factory tunnels and secret passages. All the maps provide a perfectly balanced PVP experience.

To see a full rundown of the latest Star Conflict destroyer class content check out the following link: http://star-conflict.com/en/news/667-star-conflict-1-3-en