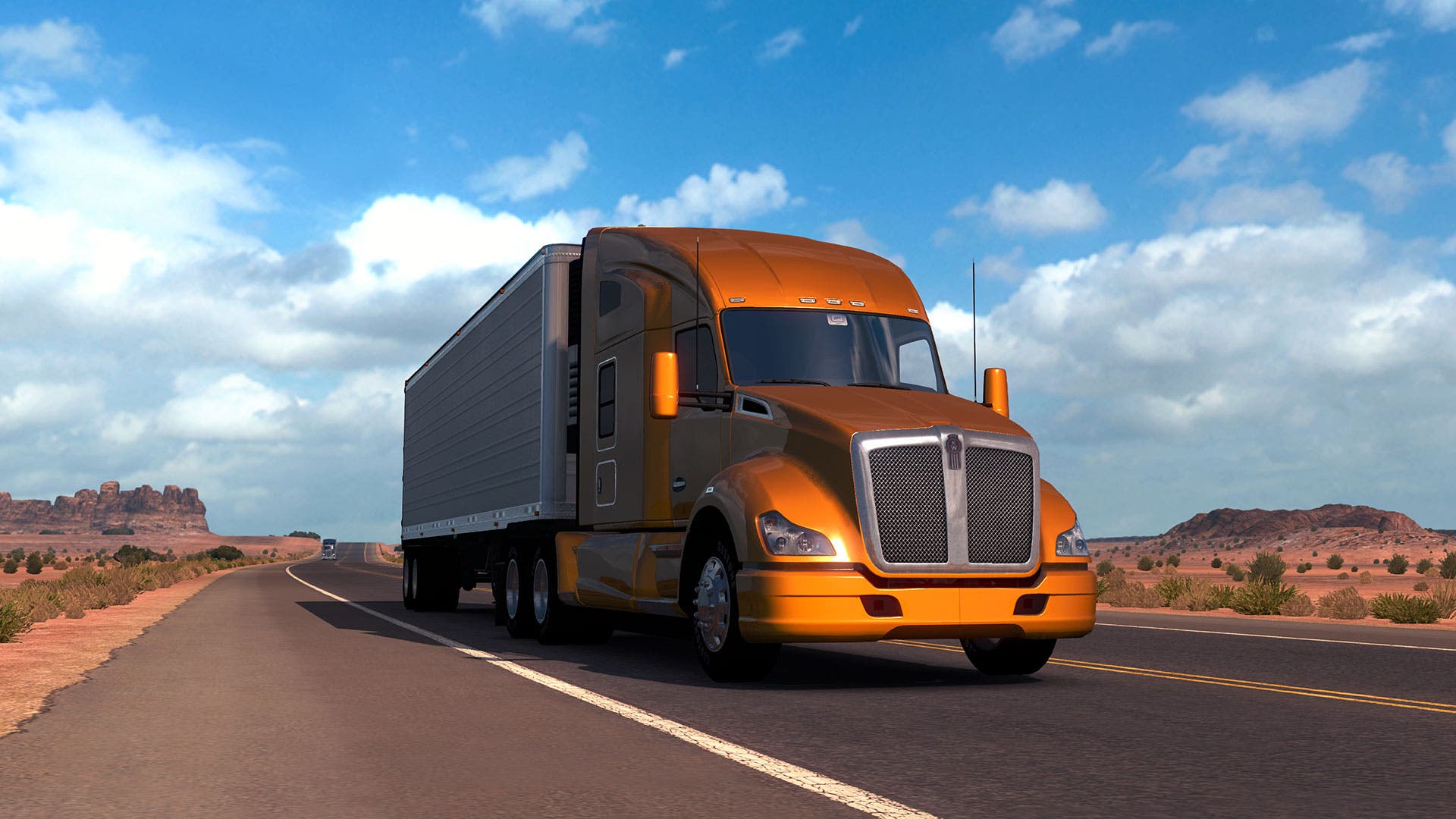 Big rigs, CB radios, that song “Convoy”, and diesel – all what comes to mind when you think of trucking in the United States. SCS Software is back with American Truck Simulator, a companion to Euro Truck Simulator 2 whereby you drive trucks, manage your own company, and make deliveries to various real-world cities. The result is something that might reel in Americans to actually play this over the developer’s previous games, simply by title alone. After you’ve created a driver profile for yourself, you’ll start off by doing quick jobs for employers. This means you do a contract of delivering a type of good: fuel, toys, construction equipment, and more to a specified location in the most efficient way. Wages are based on the miles to the destination in which you get to keep for yourself. The employer will provide the truck, pay for the gas, and it’s just you and the open road. While it is the only way to make money early on, it is a great tutorial to learn the game before going off on your own.

American Truck Simulator lets you roam the major cities of California from Eureka to San Diego, and Nevada from Reno to Las Vegas. The game is a greatest hits of cities you are able to visit, and it really nails the look and feel of them. While you can’t explore major blocks of Los Angeles, you do see a twist on branding such as “WORLD OF TRUCKS” in place of the well-known “HOLLYWOOD” sign. The lack of licensed products and real-world locations doesn’t deter from it looking the part. As you do more and more jobs, you’ll be earning experience based on performance, efficiency, and even a bonus on parking the truck. Parking your truck is done in different ways this time around, broken down by difficulties: easy, medium, and hard. The easiest way to park is to just let the game do it, but you won’t get a bonus. The medium method is to park it yourself, and it is just you pulling it straight in. Then there’s hard (one I often prefer to do as it nets you the biggest bonus for experience), this one you have to back in the trailer, and while the concept is easy on paper, applying in-game is a challenge all its own.

You could say it is a grind in terms of doing quick jobs to earn money and experience, but it only benefits you before you start running your own company. I prefer to do enough quick jobs to buy my first truck outright. You can, however, go to a bank and get a loan to kickstart your efforts as well. Once you’ve started the company proper, you will have your garage, and can purchase more as your trucking empire expands. The best payoff is hiring other drivers with your other trucks and getting multiple deliveries going. This of course, is all optional, and if you want to handle all the driving yourself, you can totally do that. American Truck Simulator is all about the open-road, and in that sense, it is open for you to play how you want. You don’t even have to buy your truck if you don’t want to. With simulator in the name, there are optional elements that help bring in real-world factors to the game. There is fatigue your driver will experience, and will have to stop at rest stops or risk falling asleep at the wheel which can have consequences. Running out of gas is real, and it is best to check the map and plan accordingly. If you happen to incur a collision, you may have to go to a repair station to fix up the damage. Risks of not doing so leads to your truck engine turning off or gears not shifting when they should.

American Truck Simulator is a form of escapism, albeit an unusual one. This is not a career path I would reasonably ever get to pursue. Among all of the shooters, RPGs, and sports games, this fits snugly in a few games that can just relax me and allow me to enjoy everything I’m doing without ever getting stressed or upset. This is a feeling I cannot overstate in gaming. It’s blissful and sublime to play while listening to internet radio, or music you insert into the game.

If you’ve played Euro Truck Simulator 2, you’ll find that the UI, menus, and overall structure is exactly the same. I kind of expected it to have some different aesthetic treatments, or something to make it standout more as being American, but it doesn’t and that’s fine. I just wish there would be a little bit different so you could tell the games apart.

Running on the same engine that powered Euro Truck Simulator 2, American Truck Simulator runs beautifully. I had no problems maintaining 60fps at any point in the game. In fact, GeForce Experience often recommends running the game at 2K or 3K because of it. The anti-aliasing, while maxed out doesn’t seem to smooth out the jaggies like it should. As you would expect, the game supports all types of controls: mouse + keyboard, gamepads like Xbox One and Xbox 360 controllers, and wheel + pedals. The wheel support is most impressive as I have used my Logitech MOMO wheel and the Farming Simulator wheel to great success, the latter feeling the best in terms of 900 degree rotation and more finite control. Whatever your preference in options, American Truck Simulator supports. SCS Software is not done with American Truck Simulator with just its release. The game features just two trucks, a Kenworth and Peterbilt, and two states. But that is only the beginning. A new truck is on the way, as is a new state: Arizona – both of which will be free DLC for the game. As far as plans beyond that, it has yet to be revealed. If the DLC for Euro Truck Simulator 2 is any indication, there’s a lot more to the United States that will be re-created to drive our virtual trucks through. The driving from A to B is repetitive by design, as is real-world trucking. It’s a great experience, nonetheless. It is satiating to get to a destination unscathed and park perfectly for those big paydays and bonus experience. The similarities between Euro Truck Simulator 2 and American Truck Simulator are striking but where the game stands now is that it is a highly satisfying, completely relaxing, and utterly fantastic continuation of the Truck Simulator series that has a lot of room to grow. American Truck Simulator can be thought of as a platform, and one in which you invest in, that will pay dividends soon enough.