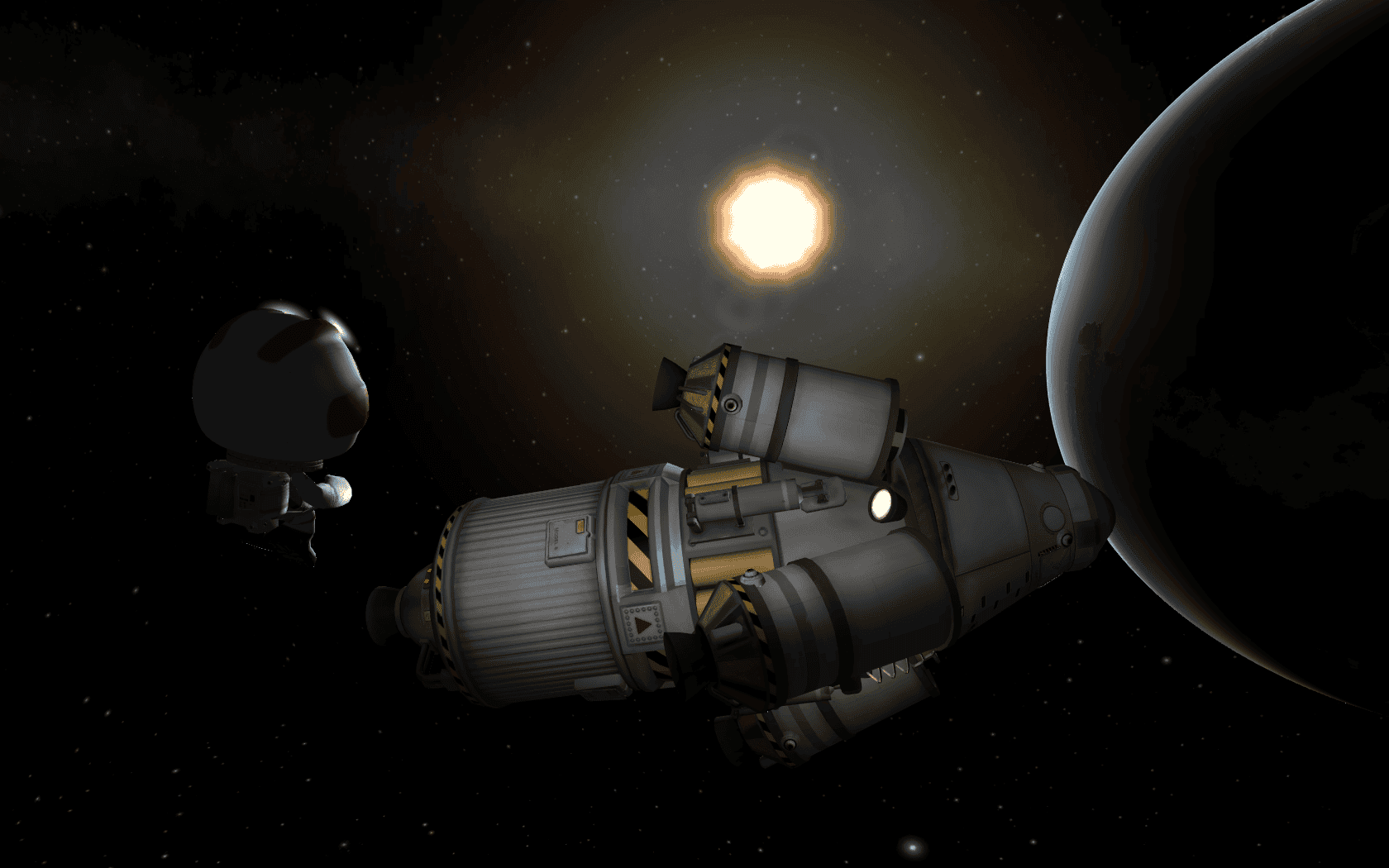 Regardless of what platform Kerbal Space Program is on, it’s still a fantastic experience. The excitement of the flight, the edge-of-your-seat moments when re-entering orbit, or the magnificent failures during flight will never not be amazing. But I don’t recommend the PS4 as the platform to play on. Play this on PC with a decent rig and never look back. If you’re unaware of what Kerbal Space Program is, here’s a little brief. You control a space program run by beings called Kerbals. These Kerbals live on an earth-like planet called Kerbin in a solar system with planets that resemble much of our own. The closest hunk of rock floating next to Kerbin is Mun, which as you can probably guess is their Moon. One of the light hearted aspects of the game are the Kerbin themselves. Apart from all the seriousness and mathematics being used to get into space, you have these dopey eyed little green men and women giving you their best facial expressions during flight. It’s hard not smile at their terror and to think of your own backstories for any of these Kerbals. People tend to create their own narrative surrounding them.

That’s just part of the game though, the main two components are constructions and flight. During construction, you experiment building spaceships of all sorts of designs; finding the best one to get you to your destination. Getting your ship right is just step one as you have to pilot this thing too. Whether your goal is the Mun or the outer reaches of the solar system, there is a plethora of knowledge and information regarding spaceflight packed into this game. There are few games out there that are as fun as Kerbal that offers some real learning opportunities as well.

We’re here for the PS4 release though and if you want the cold hard skinny, this is not the place you should be playing Kerbal. Before we get into why lets go through some of what you’ll be able to do in the PS4 version. You can jump right into the classic sandbox mode and shoot for the stars, you can hop into Science mode where the developers limit you by making you earn upgrades through the completion of space experiments, and you can dabble in a Career mode that tries to craft a system where you do science experiments according to contracts with little resources. Honestly, the best way to play is sandbox mode. But if you’re up to the challenge of unlocking parts yourself, be my guest. Before getting too far down the rabbit hole, go play through the tutorial. You’ll need it to understand the odd but functional control layout. The tutorial is deep and actually helpful, but man it could have used some voiceover. I felt like I was reading pages of dialogue in just a single text window. I may or may not have dozed off a few times trying to get through all of it. Other than the lack of voice over, I didn’t like how the game had no indication on what tutorial you had already completed. Being that each tutorial could take some time to finish, I would put the controller down and come back to find that I couldn’t remember which ones I had completed, resulting in me opening a tutorial only to find out it was already done. This would be a slight annoyance normally but with the game’s load times taking so long, it made things that much worse.

Let me bounce back real quick to the controls. Like I mentioned earlier, the controller layout isn’t as terrible as some people make it out to be. Just about every button is used and I believe that’s where a lot of the anger is directed; it’s not terrible or unusable though. What I found odd was a lack of touchpad support. The game was built originally for PCs but you can’t use the PS4’s touchpad to navigate the on screen cursor in any way. Strangely, they included the option to use the controller’s gyroscopic sensor over the touchpad. Is the sensor on the PS4 touchpad so bad that we can’t use it for a mouse? The gyroscopic sensor doesn’t work well as a form of input, no matter what sensitivity setting you set it to, it just isn’t comfortable to use. Stick to the, well, sticks.

The game has performance issues on the PS4, plain and simple. Menus can become unresponsive, frame rate can drop in certain areas of the game, and boy does the performance drop when building your craft. Cursor movements, background animations, moving parts, it just feels like the PS4 is struggling. I can’t imagine it’s a hardware issue though, but I’m also not a developer so I don’t know the circumstances, all I know is that things get laggy and can get frustrating quick. That said, once in flight the game is like butter. Everything looks as it should, looking at my PC copy and the PS4 copy side by side and you can’t really see a difference.

Regardless of what platform Kerbal Space Program is on, it’s still a fantastic experience. The excitement of the flight, the edge-of-your-seat moments when re-entering orbit, or the magnificent failures during flight will never not be amazing. But I don’t recommend the PS4 as the platform to play on. Play this on PC with a decent rig and never look back.

A PlayStation 4 code provided by PR for review purposes