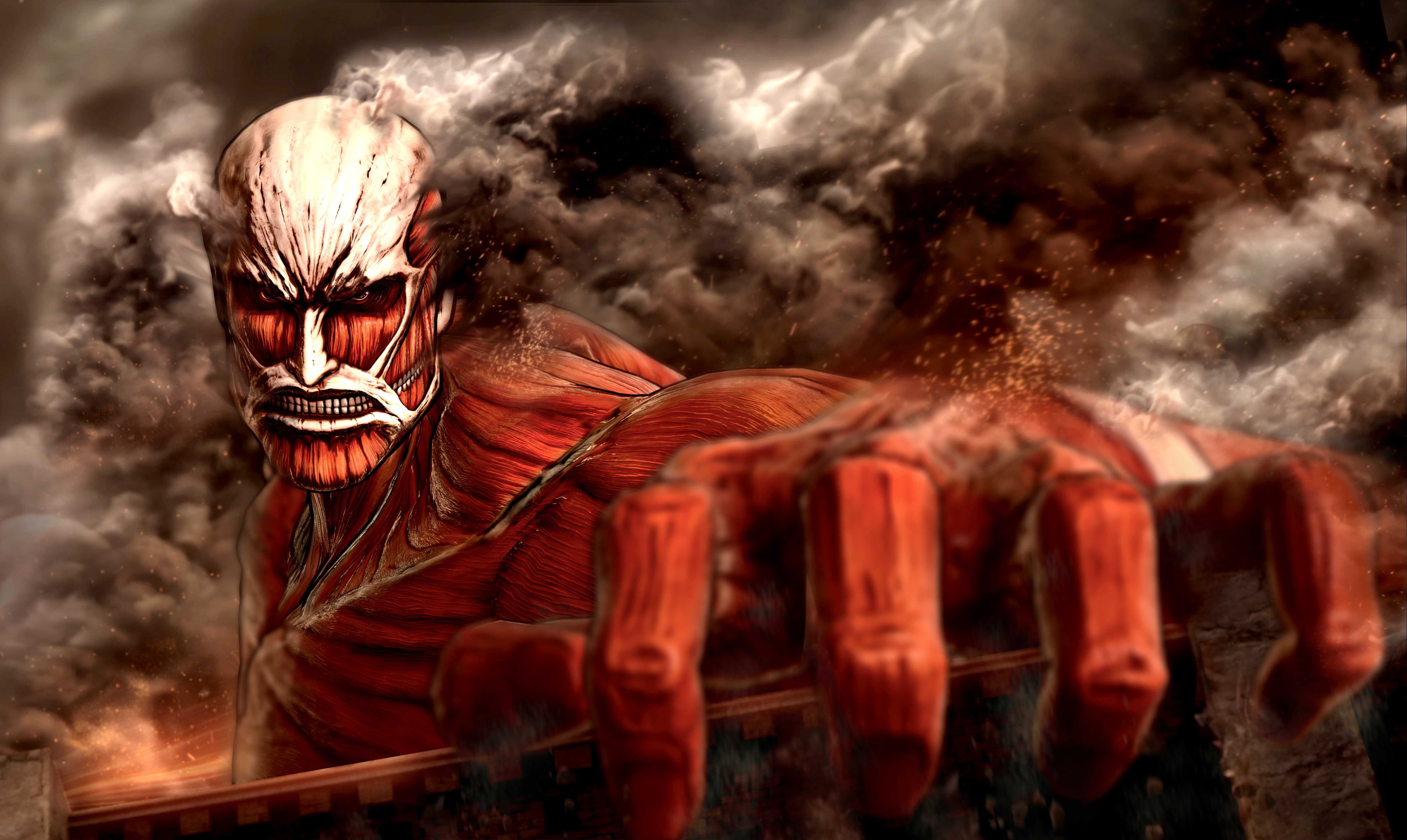 A game featuring enemies that are all giant in comparison to the main characters has to have interesting gameplay mechanics right? This is where Attack on Titan has surprised me the most. I wouldn’t put it past people to think Attack on Titan might be like a different take on Dynasty Warriors style gameplay.  Those folks are not wrong in that assumption. It’s the core gameplay elements that tend to mix things up in the way it “feels” that pulled me into this experience.

Yes overall expect to be taking down lots and lots of giants. From little ones, to medium size, to ones that tower above the rest.  In doing so players will be asked to zip around the battlefield using gas based boosters and Spiderman-like zip lines, yes that’s right.  One word always comes across my lips when playing this game: FUN. It’s not that we haven’t seen swinging mechanics involved in games before, but I don’t believe I’ve ever had a chance to play a game about giants, that allows me to swing between buildings, boost for speed, past trees, and then lock on to a colossal beast all in one fell swoop. It’s absolutely exhilarating at times. The core gameplay loops is fighting these giants while targeting their arms or legs.  Once a limb is targeted and the zip line is attached, the game then takes on an almost lock and shoot style of gameplay mechanic. As players can now hover around them, moving for the best vantage point, and then letting themselves reel towards the giant. Waiting for the burst of speed right before impact is key as this will do the most damage and usually knock a limb off. Once some damage has been done, it’s up to the player to move for the kill at the nape of the head.

It’s really hard to explain the mechanics without seeing them in person. Even trying to envision this feels a bit wild, but when seeing it in action and getting to play it, it becomes second nature after a little bit of time with the title. In the end it becomes a balancing act of trying to known when to refill the gas in the zip gear, repairing the swords, and getting assistance from other fighters on the battle field. There are moments that do help break up the repetition as well, even if it’s mostly a mild change.  From having to use horses in one battle, a cannon in another, or perhaps guarding a Titan carrying a huge boulder. I believe my favorite mix up is when actually getting to control a Titan, which had me grinning ear to ear. Yes the core element of fighting and combat is here but this little variation or mix up helps things feel as stagnant as they could.

Fighting also surprisingly yields elements to collect so that weapons and equipment can be upgraded. This in turns makes players do more damage in battle and gives a bit more incentive to grind out battles. This can be done via story mode or once finished, expedition mode.  This is an extension of elements from the main campaign, but also allow any character to be played instead of forcing the narrative characters. Only to include a 1-4 player online mode. It’s as every bit chaotic as the regular game is but with friends, could become even more cathartic and fun.

Visually it looks like an anime title does, with the giants looking just as freaky if not even more then in the show. There is something about these naked beings, running around, eating people that just strikes a sense of oddness. Sure it can also come across comical as sometimes players can literally have a huge butt on the TV screen staring them in the face, but the context of it all helps levitate that. When the action gets intense, combatants flying all over the screen, and giants come crashing down into collapsing buildings, there is a sense of chaotic fun that overtakes me. Sadly draw in does occur in the more open field areas, but it was never anything more than a mild detraction. Overall, it looks like the franchise and there is no denying that. Voice acting all seems well done, even though there is no English dub, and the soundtrack seems consistent to what is occurring on screen during its high octane action moments, or more drama filled elements. I also really enjoyed their cut scenes as they usually look flashy and have lots of acrobatics with the zip lines happening. Attack on Titan is a surprising game that I think fans of the show will absolutely enjoy. Being a newcomer to the franchise, it gave me enough story elements and gameplay to pull me in that I have even more interest in checking the series out then I ever did before. While I’m sure here in the game, it’s a more condensed and detail lacking story being told, it’s still did a serviceable job in getting me interested in these giant monstrosities and the battles occurring on screen. The camera can go a bit crazy at times and when there is a lot going on screen, slowdown definitely occurs, both of these combined which can lead to some very frustrating moments, it’s my biggest nagging issue with the game. Occasionally the giants will converge on one area and get sort of corralled into each other causing some unintentional hilarious animations.  All these weaker elements aside, Attack on Titan is a fun, unique, and different yet familiar style of game that keeps pulling me back in for either new equipment material to farm or just to boost around the environments. It got me interested in the series more so then ever before and shows that the Dynasty Warriors-like gameplay can still provide a unique and interesting take on the genre depending on the set up and added mechanics.

A pre-release PS4 code for the game was provided by the publisher for review purposes.