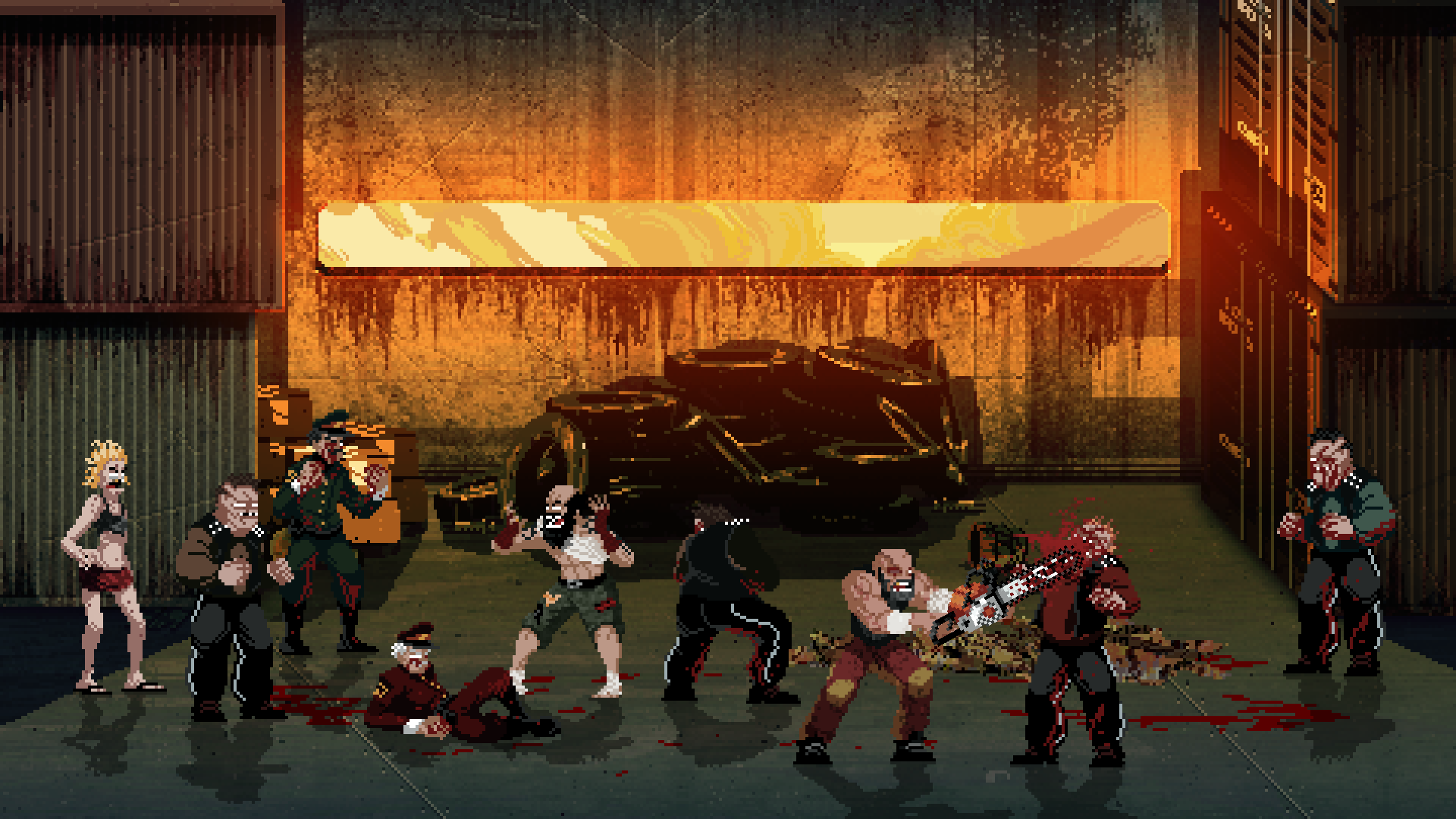 Mother Russia Bleeds is a brawler with a conscience, has a thirst for blood that spills like in Hotline Miami, and behaves like hyper-violent Streets of Rage. Though, Mother Russia Bleeds often makes you pause at the actions you’re undertaking: injecting drugs, merciless beatdowns, and whether the cause is a just one. Le Cartel Studio have injected the side-scrolling beat’em up with a freshness that only air fresheners could provide. Taking place in an alternate 1986, you’re in a band of gypsy’s located in the U.S.S.R. You’ll find its streets riddled with propaganda, classism, and oppression. Just after the tutorial, you’re captured and given a new superdrug of unknown origins and concoctions. It has some nasty side-effects, so be ready to see a lot of puking through the course of the game. The drug is named Nekro, and you can either heal with it, or use it to power yourself up into essentially a roid rage to deliver incredible feats of strength and brutality. When playing in co-op, you can heal allies from your syringe, which fills up in pips of three. If you have no health but need to revive, you’ll take some of your own health to bring them back. Aside from the story mode, there’s an arena mode to seeing how long you can go. You’ll unlock new drugs for story mode by reaching wave 10 is an interesting incentive to play in that mode. Mother Russia Bleeds‘ primary focus is on co-op, but can be played solo or with bots. You’ll take control of either Ivan, Natasha, Sergei, or Boris. Each character feels differently but ultimately plays rather similarly. This is to the game’s benefit so no one player is feeling like they aren’t adequate enough. Notably, there’s a toggle for ‘friendly fire’, this allows for a competitive aspect to the co-operative gameplay to allow you to just throw punches at anyone and everyone for supremacy.

In this grim brawler, Mother Russia Bleeds is brutal, violent, and bloody for all the right reasons. As you make your escape from the lab, you’ll traverse through trains, sewers, compounds, S&M clubs (yep, you read that right), and more. There are weapons like clubs, bats, toilets, and heads that can be picked up and used for extra damage. There’s a death ballet of grabbing a guy, throwing him straight up into the air, doing a jump kick, and landing on him to deliver punch after punch until he’s killed. If an enemy isn’t killed in the head, he may convulse, which lets you refill your syringe for health or power-up. The moody and punchy soundtrack accentuates the brutality happening on screen.

Each level of Mother Russia Bleeds ends with an expected boss battle, which every single one of them is unique, varied, and challenging on its own. This is par for the course in a beat’em up, but Mother Russia Bleeds really goes out of its way to present things you haven’t seen before: axe-wielding master of sex, raging assholes driving a meat grinder, and even a narcotic-infused bear just to name a few of the things you’ll have to kill to proceed. These set piece bosses are memorable and the type of things you’ll be talking about long after the game’s finished.

Mother Russia Bleeds can be played solo, but at a certain point I found it difficult to complete certain levels. Up until halfway through the game, normal difficulty is fine, but switching to easy felt a bit too easy. I found the balance of adding one or two AI members on Normal. This allowed me to enjoy the story and have more fun during combat. As viscous as things are on-screen, the game saves via checkpoints rather frequently. Later levels give you guns with plenty of ammo and it it feels oh so satisfying when the screen is completely filled with enemies.