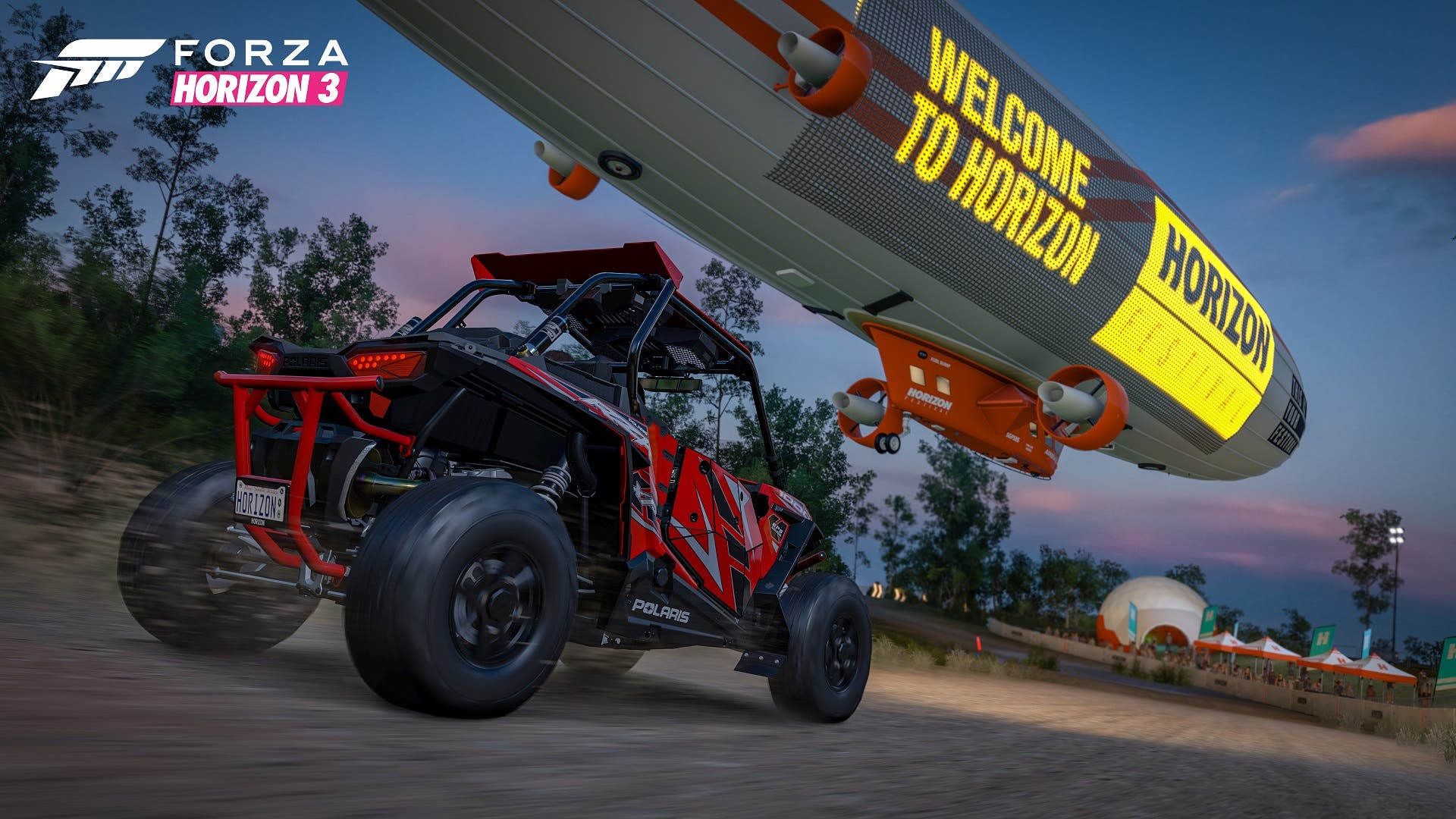 Forza Horizon 3 busts out of the gate in providing unparalleled freedom to explore, race, and customize. Forza Horizon 3 is the perfect game for people who maybe aren’t car aficionados, but is the type of game that could make them one. The party that is the Horizon Festival is one that rivals the hardcore that attend EDC in Las Vegas every year. The unmitigated fun found in Forza Horizon 3 is bereft of police, negativity, and an inability to slow down. You can lose yourself in Forza Horizon 3 for hours constantly saying “okay, one more race.” Forza Horizon 3‘s introductory race is a great in showing you many of the things you’ll experience in the game: big open-road racing, driving screaming-fast hypercars, and racing against a helicopter carrying a jeep. For the first time, you own the festival. Due to this shift in how you partake in the festival you’ll now be placing festival sites, leveling them up which there are visible changes. You’re then unlocking newer and higher tier races that plaster tons of points of interest onto your map. When starting a race, you can create “Horizon Blueprints”, which allows for you to set up a race of your own design on the pre-designated track layout. If you’re not the type that likes to race Honda Civics or Mini Coopers and just want to jump into racing Lamborghini Aventadors, you can set that up for yourself. Races are distributed into three categories: Exhibition, Championship, and Rivals. Exhibition is for one-off races, championships are multi-part races, and rivals lets you challenge your friends’ drivatars for the best time on a track.

There’s a bit of character customization this time around, where you can pick from a dozen or so preset male or female drivers to represent you in game. You see your characters rarely, but they more or less won’t look like you and doesn’t matter which one you choose. Giving your character a name holds some importance, and then the game will call you by first name or from a list of available names. So if you chose the nickname “Sausage”, prepare to hear that a lot because the game will call you by name as often as they can. Vanity plates are now available to put in whatever you want. Style an Australian license plate with up to eight characters to be a standout when driving around. Content creators in Forza are going to be disappointed in not being able to create custom license plate vinyls for the game. Perhaps the most important thing here is the addition of car horns, for the first time in all Forza history, your car now has a horn. Over the course of the game you unlock special horns like La Cucaracha or even Halo-inspired horns like the Warthog or the Halo theme itself. Though, if you find these to be annoying, car horns can be turned off completely. Virtual Australia is gorgeous. Playground Games spent months recording real Australia skies for an accurate and picturesque view for everything you look at. Day turns to night, clear turns to rain, and fog and haze will come and go. The water puddle technology used in Forza Motorsport 6, makes its way here and will still slow you down while making a big splash. Many races will give you some breathtaking vistas that can only be seen to be believed. I have an original Xbox One, so I can only imagine what the HDR effects makes the game look like on an Xbox One S. No matter where or how you play the game, it is the best looking Forza game to-date. Despite it running at a rock-solid 30fps, the lighting, shading, and pure saturation of vivid color just doesn’t compare to Forza Motorsport 6 even though that runs at 60fps.

Forza Horizon 3 rivals its predecessors, both Forza Horizon 2 and even its more serious brother, Forza Motorsport 6 with available cars to drive. There’s over 350 to buy or earn, and is the most of the Horizon series to date. As a result, you’ll see a lot of the same cars from previous entries here. Because this game takes place in Australia, the game leans into including Australian cars, classic and modern to include Utes, muscle cars, and buggies. But it doesn’t feel like they aren’t leaning hard enough as a lot of Australian cars. Though, Australia as a locale is like Horizon 2‘s across Southern France and Northern Italy, but bigger and more varied. Forza Horizon 3 simplifies some of the side activities. Things like speed traps and the new danger sign jumps to more natural fit into the game as “PR stunts” to put the most speed into them, which used to be a hassle to find. All the PR stunts have a rating system, to a maximum of 3-stars to earn on Danger Sign Jumps, Drift Zones, Speed Zones, and Speed Traps. Bucket Lists return, and allow for you to craft your own to play and share with others in another blueprint type. Showcase Events have familiar elements to prior games, but I think they excel in Horizon 3. If after everything you can’t find something to do, you can use the in-game navigation, ANNA to help keep you on-track with what you were doing, or what you should go for next.

Forza Horizon 3 has many collectibles, from barn finds to roads to smashing boards of experience and fast travel. Experience boards just give you instant XP once they’re found. Fast travel boards reduce the cost in credits to travel from festival hub to festival hub. It’s a strange thing, because the core of the game is driving and racing, so why wouldn’t you just want to drive everywhere as you’ll come across more boards and uncover more roads? All the experience you gain turns into skill points that can be spent on perks. Many of these perks don’t have a real purpose, but the benefits of investing into them just makes life easier and accelerates your ability to progress faster. A new sub-tab of using your skill points to receive one-time experience points or credits. There are also skill points that can be spent many times over, such as receiving a discount on upgrades or have a better starting grid position on the next few races. With a game this gorgeous, you can take photos at any time. A perk can be purchased that’ll give you money for taking pictures of cars for the first time. Secondary to the camera is a drone mode which has no tether to your car and lets you fly around, at a restricted height, but allow you to see things in new an interesting ways. You can take photos from in-game but can use the Xbox One to take screenshots and video of what you find while flying around. I wish the drone was a bit more robust or worthwhile to use.

The Forza Horizon series is known for its soundtrack selection, and this time around there are eight radio stations, and through the early parts of the game you are arbitrarily “signing” as you progress. Eventually you sign all radio stations and can freely use all them, but there’s really no point to piecemeal add them into the game. Though this is the most diverse selection of radio stations in the series, and will appeal to more people. One of the radio stations is Groove, Microsoft’s music service, and if you don’t have a subscription or want to do the 14-day free trial, it’ll throw an error trying to play from it – and you can’t disable its integration other. I would have rather wanted a Spotify-integration, but I like the idea, I just don’t know anyone who uses it. The neatest thing done with the soundtrack is that certain songs are tagged as “skill songs” that during free-roam will double the multiplier from the start for you to go into a frenzy to try to get skill points at an accelerated rate. If you so choose, there’s even a perk you can buy to increase the chances of a skill song coming on the radio. Forza Horizon 3 continues the design ecosystem present in prior games allows you to bring in designs from Forza Motorsport 6, Forza Horizon 2, and even Forza Motorsport 5. If you’ve been bringing over designs since Forza Motorsport 3, you can keep your designs alive here. Another blast from the past is the return of the Auction House, last seen in Forza Motorsport 4. This is a game of chance of bidding on a unique or unicorn car, and hoping you don’t get “sniped” from getting your dream car at perhaps a discount. In the menu, Upgrade Heroes are body kits can be bought for a select number of cars that do change their performance and handling, but make them look really cool using real-world parts.

Forza Horizon 3 changes the formula in how you earn free cars. You don’t earn cars by winning showcase events anymore. Yet, for each of the four festival sites you place, you can take a free car from a limited selection. While illicit street racing “officially” has no place for you as the boss, you can still partake in them, and come away with the loser’s car. Though, there’s a neat loyalty system built-in to Forza Horizon 3, where just by buying and playing previous games in the Forza series, you’ll earn rewards. By completing certain objectives driving certain miles, collecting many cars, or even playing a certain number of days, earns you points towards a leveled tier in Forza. As a result of your time spent in-game, you’re given a lot of cars based on your individual tier, and given some expensive cars that you don’t have to spend your hard-earned credits on. Forza Horizon 3 is one of the best racing games you can play. With customizations, a massive car roster, a huge open world to explore, this unrelenting fun is fantastic and incomparable to any racing game out there. Everything you can do in Forza Horizon 3 is vying for your attention: championships, showcase events, barn finds, and speed traps – you’ll be pulled in so many different directions that you won’t ever feel bored or left without a challenge. There’s hardly anything to actively dislike. Playground Games has made a powerfully social, comfortable, and exciting racer that never imposes anything but the freedom to do with what you want, at any speed you’re comfortable with.

A pre-release Xbox One code was provided by the publisher for review purposes.