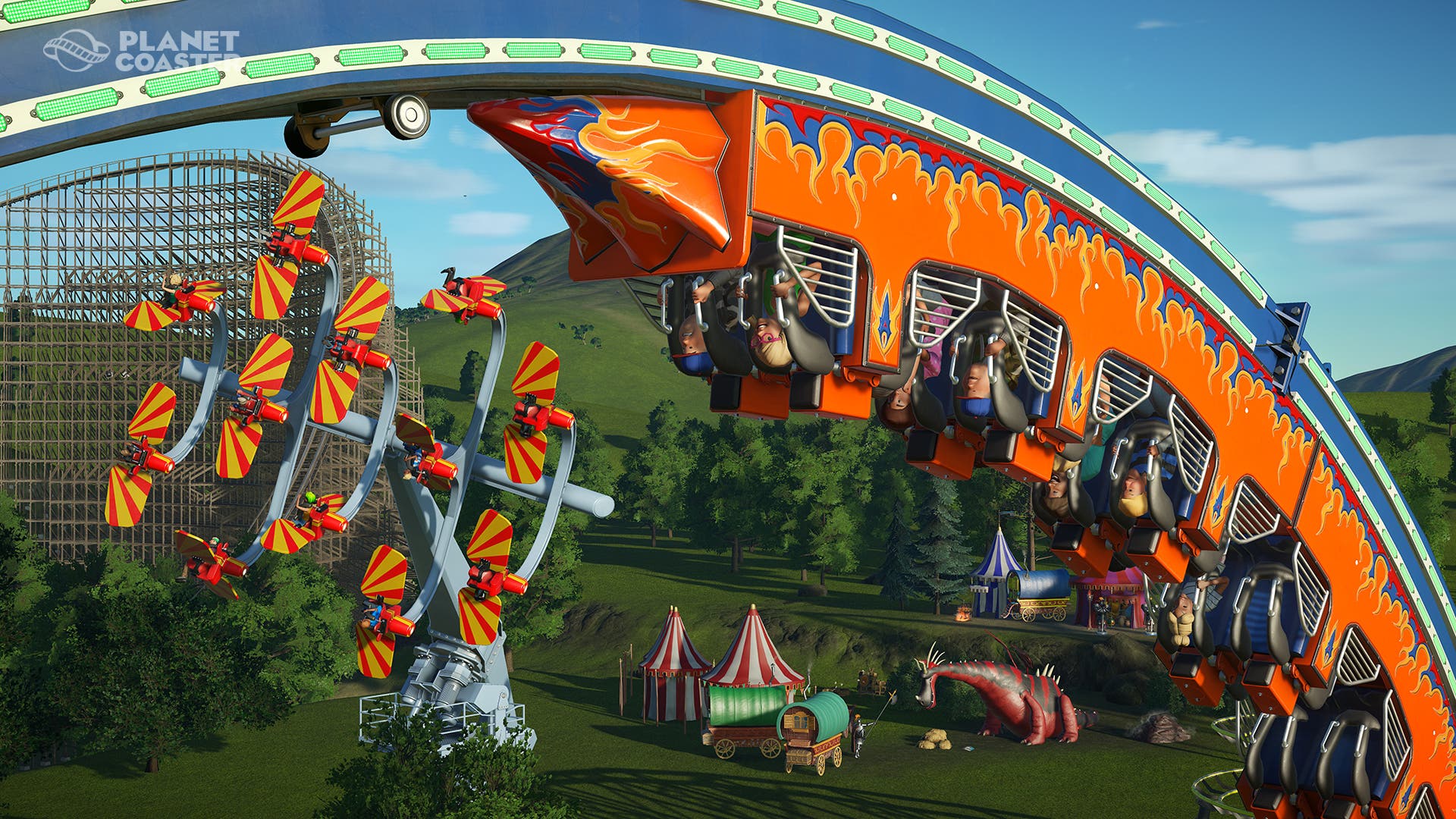 I don’t particularly enjoy strategy games. I don’t know what it is, but if a game requires just a little too much thinking, I have practically no desire to play it in my downtime. I’m a lazy casual I suppose. Though Planet Coaster… Planet Coaster did something to me. I played Theme Park and Theme Hospital as a kid. But at that time I had no concept of winning or losing in a video game – maybe I just never beat the first level. Frontier Developments though have knocked it out of the theme park, and have crafted what I believe is possibly the most approachable and endearing strategy/management game possible. That is to say it’s an absolute joy to play if you  want something inviting to pull you  in. If you’re looking for an incredibly granular level of control over your park, I feel Planet Coaster oﬀers that too, with it’s staﬀ training mechanic and detailed insights into the inner-workings of the guests as they ride your coasters and roam your parks.

The  Career mode oﬀered is perfectly paced out, with challenges and medals awarded for achieving certain criteria in a park, but not a timer in sight. Take your time, pause time even, and enjoy yourself while trying to make the provided partially-created park profitable. Be it with prefabricated rides such as various diﬀerent ferris-wheels, swinging pirate ships and tea-cup rides for the more family friendly of you. If you’re looking for the meat of the game though, lay some track for your own custom coaster. Choosing the materials for the track, the route, the music, the colours and the scenery, this is YOUR coaster. That’s where things obviously get a little pricey and other variables start to come into play. Want to build a ride with more peaks than the Swiss  alps? Go right ahead, but good luck balancing cost with rider excitement, fear and nausea. You can analyse your track using the overlay modes provided to see exactly where and how your coaster is causing it’s riders to vomit. If however you’ve practiced your coaster building prowess in the Sandbox mode, you  can handily export your tried and tested coasters and scenery to a Blueprint slot. Feeling particularly proud of your creation? Publishing said Blueprint to the Steam Workshop is incredibly simple. Sharing your creativity with the other park creators out in the ether is a tremendous feeling, especially as the imagination really shines through through every community blueprint I’ve seen yet.  When going to use  a Blueprint in your own parks, it is then assigned a cost based on the sum of its parts. Planet Coaster’s community has latched on in full-force very quickly and are  adding a whole new layer to the game for those of us not so great and creating a new Chief Beef kiosk or coaster from scratch, like myself.

I expect, much like Cities: Skylines a lot of Planet Coaster’s long-term replay value will come from the absolutely outstanding community-created coasters, facilities and scenery packs. It also  seems at this stage Frontier Developments are  dedicated to bringing more and more content to the base-game, including a free pack with a number of Christmas themed elements this December. I’ve not even gotten around to talking about my three favourite things about Planet Coaster yet.  So let’s get to that finally.

Firstly, the terrain modelling. Never have I played a video game that has so easy to use  and such powerful tools for the player to truly sculpt the landmass to their will. If you  want make a mountain shaped like a giant skull that a wooden coaster wraps around and through, you  can do that entirely with the terrain sculpting tools and a little imagination. This is what I spend 90%  of my time playing actually doing. It’s remarkably therapeutic.

Second up, I like to play games from my sofa  when I can. Ideally with the Steam Controller. Although Planet Coaster doesn’t directly support the Steam Controller, it does have the best Interface Scaling system. By increasing the on- screen button sizes and reducing the wording assigned to a button which is instead represented with a nice clear and obvious icon as to what the button does, this means that playing Planet Coaster from the sofa  across the room is an entirely viable option.

Last and in no way least is the score. Jim Guthrie and Jj Ipsen have provided a layer of magic to Planet Coaster I think no other game can rival. Perfectly timed to what you’re doing in—game with it’s joyous crescendos signifying your success and truly carrying the feelings over from your parks customers to you, the player. Planet Coaster captures that real-life theme park feeling, bakes it into one hell of a delicious cake and oﬀers you, and a growing community, a slice with a smile and a balloon.