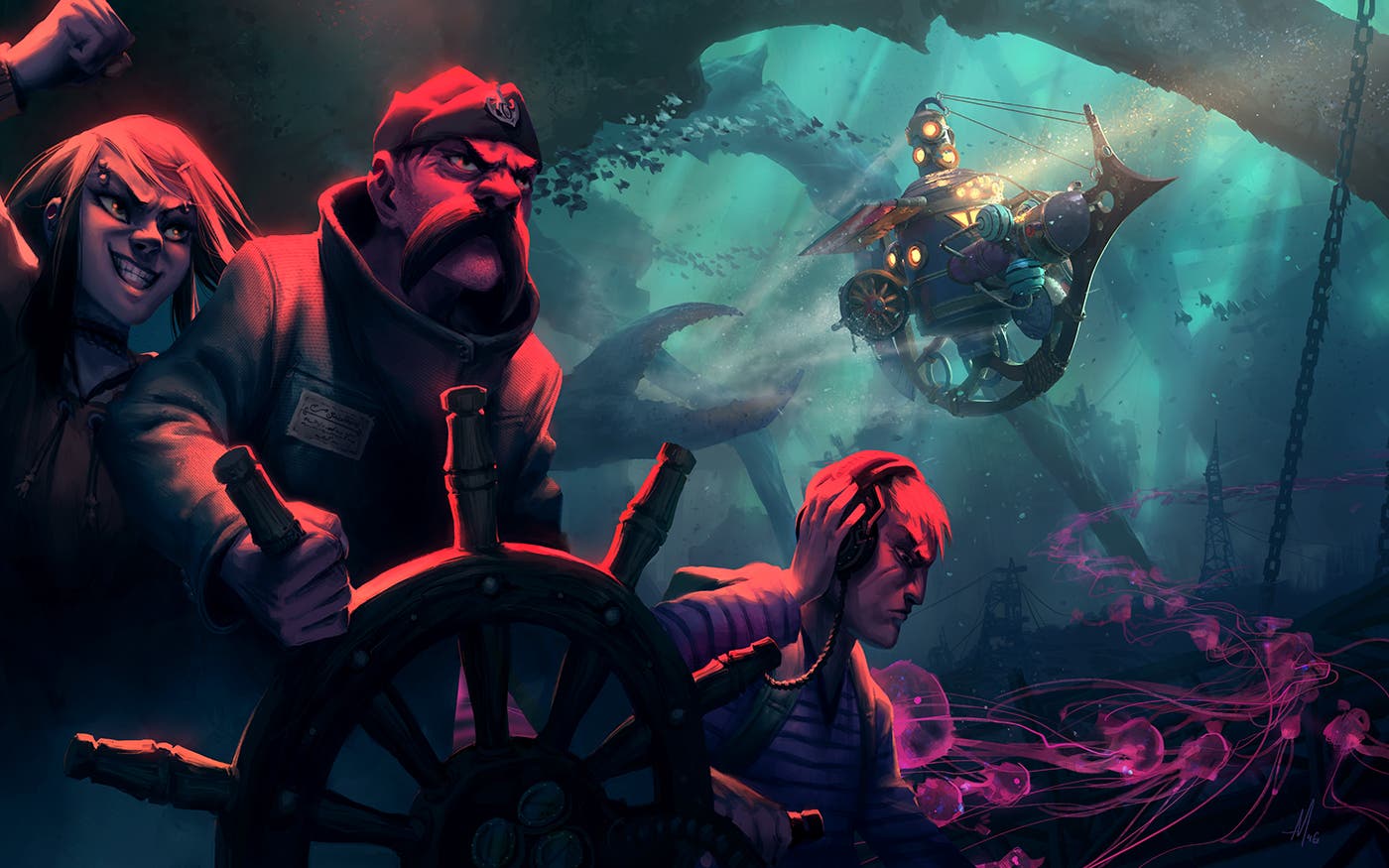 We often look to the stars as a means of exploration beyond our own world. Arachnid Games looks to the great expanse of the sea with Diluvion. And in this, the game is an interesting take on the apocalypse story. There’s people to meet with, trade with, and fight against. However, I found myself fighting with the game itself more than conflicts you’d find therein. Diluvion‘s beauty gets washed away when that problem surfaces, but remains as something you shouldn’t overlook, either. Editor’s Note: This was reviewed before and after the version 1.17 patch

Diluvion is a game that takes place in a world where only water is the means of navigating (a waterworld, if you will), and land is nothing but a myth. Centuries ago, a great flood had taken over all the land, and a thick layer of ice prevents everyone from ever reaching the surface again. This restriction makes it so the player is in constant need of oxygen and frequent stops to maintain survival. While it doesn’t lean too hard in this way, it has three basic components to being able to keep going: collect scrap metal to arm your cannons for battle when someone doesn’t like you enough to start shooting, oxygen to keep everyone breath, and food so everyone doesn’t stop doing their jobs and starve. It’s simple on its face, but is a careful balance of spinning plates to keep the tension up.

Diluvion‘s oceanic exploration is all in three dimensions, complete with breathtaking vistas, cloudy waters, and bio-luminescence. It’s a somewhat rigid and limited ocean to explore, but a beautiful one accompanied a haunting soundtrack. That beauty doesn’t quite extend to the UI, as it is rough and looks unfinished – it functions fine, but doesn’t seem to fit in the game. Whether you are looking into your ship, or docking elsewhere, the game slickly transitions from 3D to 2D with a unique art style that is steampunk-inspired. Unfortunately this 2D artwork clashes with the 3D gameplay. It is jarring to go between the two, I would have rather they stuck to one or the other in terms of presentation. As part of the latest patch, you can now set your controls between arcade (pre-patch), and simulation (post-release patch). You can switch between either control method at any time, but I found the arcade controls the one that made the most sense, and the one I had spent the most time with. By default, your ship is offset from the reticle, but changing that only made it get lost for combat. The movement does take some getting used to, but enjoyable once you get the hang of it.

Navigation is intentionally(?) difficult to traverse in Diluvion. There are often glowing golden fish to guide you, but not always to your intended destination. Everything in Diluvion is landmark-based navigation. A recent patch has mitigated most of the concerns I had because your sub that you’d pilot would never appear on the map. This followed the old seaman’s method of “sailing by the stars”, but instead based it on oceanic landmarks – but now the sub does appear on the map, thankfully. This eases a lot of the frustration of getting lost, and either starving or suffocating because I couldn’t make it to or back to a safe area.

Through the course of the game, you’ll have random encounters with enemy subs which almost always results in your death, and are rather difficult as they happen to be very upgraded. You too can upgrade, adding things like torpedoes to your arsenal. The over combat of the game feels a lot like luck over skill, though. This happens ad nauseam, so the repetitive and uneven combat situations dilute the combat experience, so much so that you’ll want to avoid it at any chance you get. When you are docked, or conversing with your crew, the game slows down outside your sub, but doesn’t stop time. So you can be attacked while docked, enemies do not care if you are in this state or not. There’s an element of Fallout Shelter of placing people (with a population cap) to increase efficiency of stations, but you must always do this out of combat so nothing goes awry.

In navigating the world, going too deep introduces crush depth. Later upgrades allow you to go deeper, but until then you are artificially restricted. Through your travels, you’ll come across distress signals, prisons, trading posts, and hubs to converse with NPCs, despite how samey over half of the NPCs you talk to look like. A neat thing I noticed was tether tension when docking. If you try to dock from too far away, you risk breaking your line. This really has no effect on anything, but I’m glad Diluvion has it – it’s something that feels like it exists in the world, not just as a gameplay mechanic.

Diluvion feels like you’re just completing objectives laid out on a checklist. It hardly feels like the you are directing the game’s progression. There are more submarines to get outfitted with than what you start with. In fact, there are 9 in total, but I only unlocked 3 of them. Diluvion does want you to feel secure, so there is a place you can call home not long into the game that is a great place to feel truly rested safe from death.

One thing I wish the game had taught me better, was that saving occurs by swimming through schools of blue fish. If you hadn’t done that anytime recently, and you die for whatever reason, you go back to the last time you swam through blue fish which could have been a very long time ago. I lost progress to this often, but once I learned when the game actually saved, didn’t become as much of an issue. Diluvion is at odds with itself, and myself. I’m finding more fun to get lost in and traverse than to actually play. While those actions are similar, working towards that progression inserts the frustration of its difficulty. Perhaps Diluvion is brilliant in this regard, in that it is expressing that it is “more about the journey than the destination” approach. I far from hate this game, but there’s just a few too many issues that keep me from loving it. Despite that, I can’t help but recommend it for its unique approach to interactions, navigation, and overall gameplay.