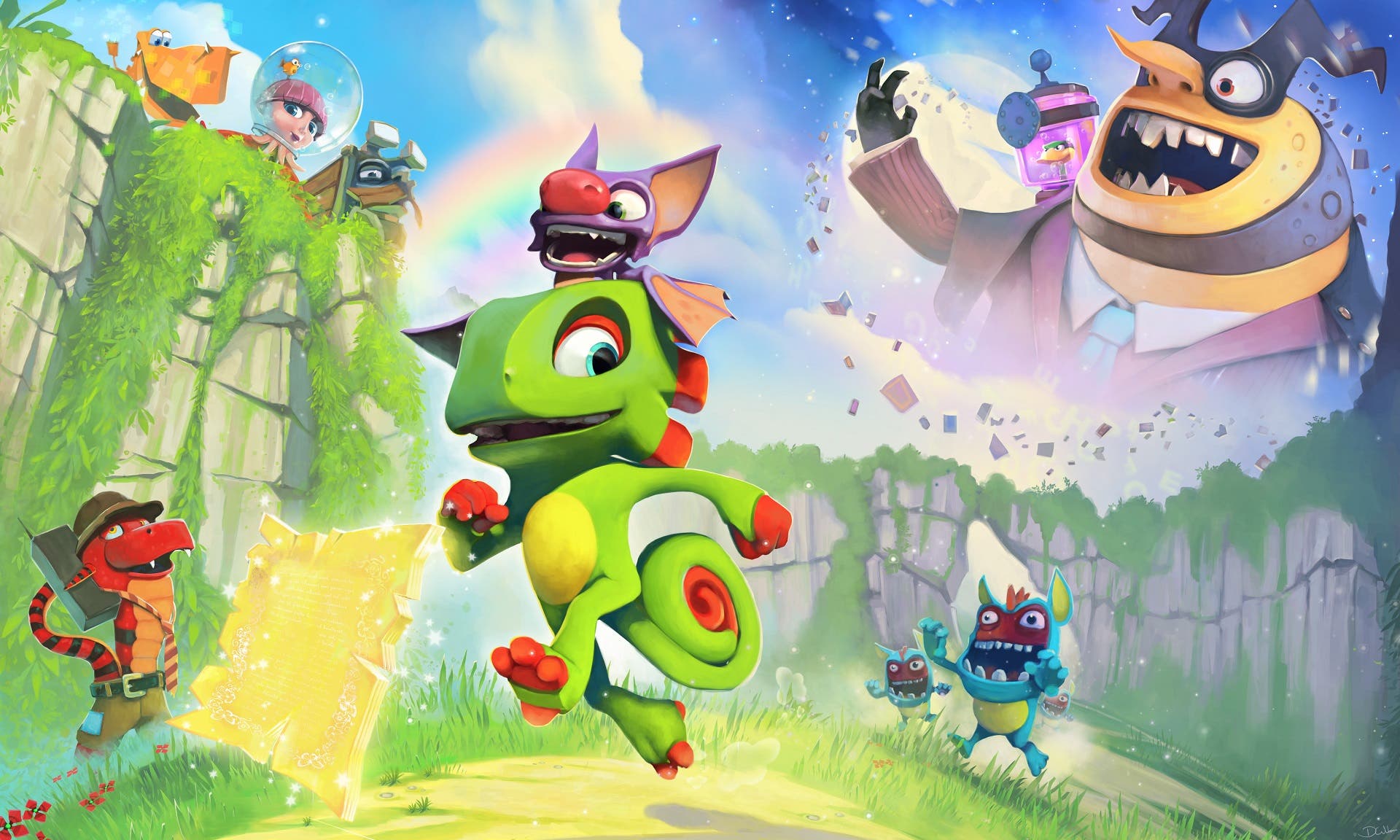 While the cast of characters are different, there’s a lot of similarities to Rare’s classic series. Like Banjo-Kazooie being an instrumental name for the characters, Yooka-Laylee follows suit. Yooka is the green lizard, and Laylee is the purple bat, and together they form the best team since bears and birds partnered together. Now, there’s more analogous characters in this universe: the big bad is Capital B, a money-focused bee-man that exhibits a resemblance to Gru from “Despicable Me” movies. Dr. Quack is equally as bad, and is the associate to Capital B. The analogies in Yooka-Laylee don’t stop at the characters, but also at the collectibles. Instead of musical notes, you’re picking up pagies, instead of quills, there’s jiggies, and so on. Yooka-Laylee is a massive collect-a-thon in all the ways you’d expect, there’s ghost writers, play coins, and minecart gems to collect through your journey. With over 1,010 things to obtain, this will keep you busy trying to find them all.

Besides the running, jumping, and puzzle solving, the worlds of Yooka-Laylee are about engaging with NPCs, learning what they have to say and returning them after doing what you need to. The result is gaining a pagie, which when 3 are collected, should be used to expand a world to collect more, find more, and do more. A lot of what you do in Yooka-Laylee is also involves races of different types, and playing arcade games. Progression in Yooka-Laylee comes in the forms of buying moves from a noir-style Indiana Jones type of snake named Trowzer. Vendi is a vending machine that allows you to equip a perk like an extra butterfly (heart) or using less special power when rolling. It all follows a familiar formula with an all-new look. Yooka-Laylee‘s adventures start in Shipwreck Creek as a short means to get you acquainted to the controls, characters, and how to progress. Soon after, you make your way inside Hivory Towers and then begin in your first world, Tribalstack Tropics. Other worlds follow archetypal biomes of snow, marshes, a casino, and space. Some levels are more impressive than others, but the back half of of the worlds to explore become more fun. The enemies placed in these worlds seem to be there to populate what is still a mostly lifeless place to explore, and they offer no real threat to the player. The real threat in the game comes in the form of boss encounters, and they can be rather, but nothing insurmountable.

There’s a lackadaisical attitude towards progression in this game. Purposefully, there’s no map, minimap, quest markers, breadcrumbs, or anything to guide the player. It is clearly meant to let people do anything in any order and progress how they see fit. However, this gets in the way of making progression as all too often you have to go do something, and have to engage in a slow, monotonous conversation with an NPC to remember what you need to do. Paying homage to the Banjo-Kazooie games that came before it, the short soundbyte used when characters speak is repetitive and annoying when in longer dialogues, and hurts more when some of them you can advance the dialogue, and not in others. While I respect Playtonic’s commitment to making the game play exactly like prior ones, it could have used some modern ideas to freshen it up.

It may sound like I dislike Yooka-Laylee, but that couldn’t be further from the truth. I really enjoy the game, I just wish its focus on being nostalgic and like games from the late 90s on the Nintendo 64 wasn’t so stiff, because it comes at a benefit and detriment while playing through Yooka-Laylee.

You can tell Playtonic made friends with other indie developers, as characters from other games like Shovel Knight makes an appearance in it. Yooka-Laylee has snappy and sharp writing, and they go for some 4th wall breaking jokes as well. Grant Kirkhope returns to score the soundtrack and it sounds like what you see before you. The game looks and performs great on PC, there are some slowdowns here and there, but the game maintained a strong 60fps most of the time.

If Yooka-Laylee was made by any other developer who didn’t previously work at Rare, this would be considered a blatant rip-off. But instead, Playtonic picks up where Rare couldn’t. For whatever reason a new Banjo-Kazooie couldn’t be made, and so Yooka-Laylee takes its place. I’m looking forward to what’s next, perhaps a new Nuts & Bolts-style game after this. Playtonic Games has captured a certain type of magic from 1998 and brought it to 2017 in spectacular form.