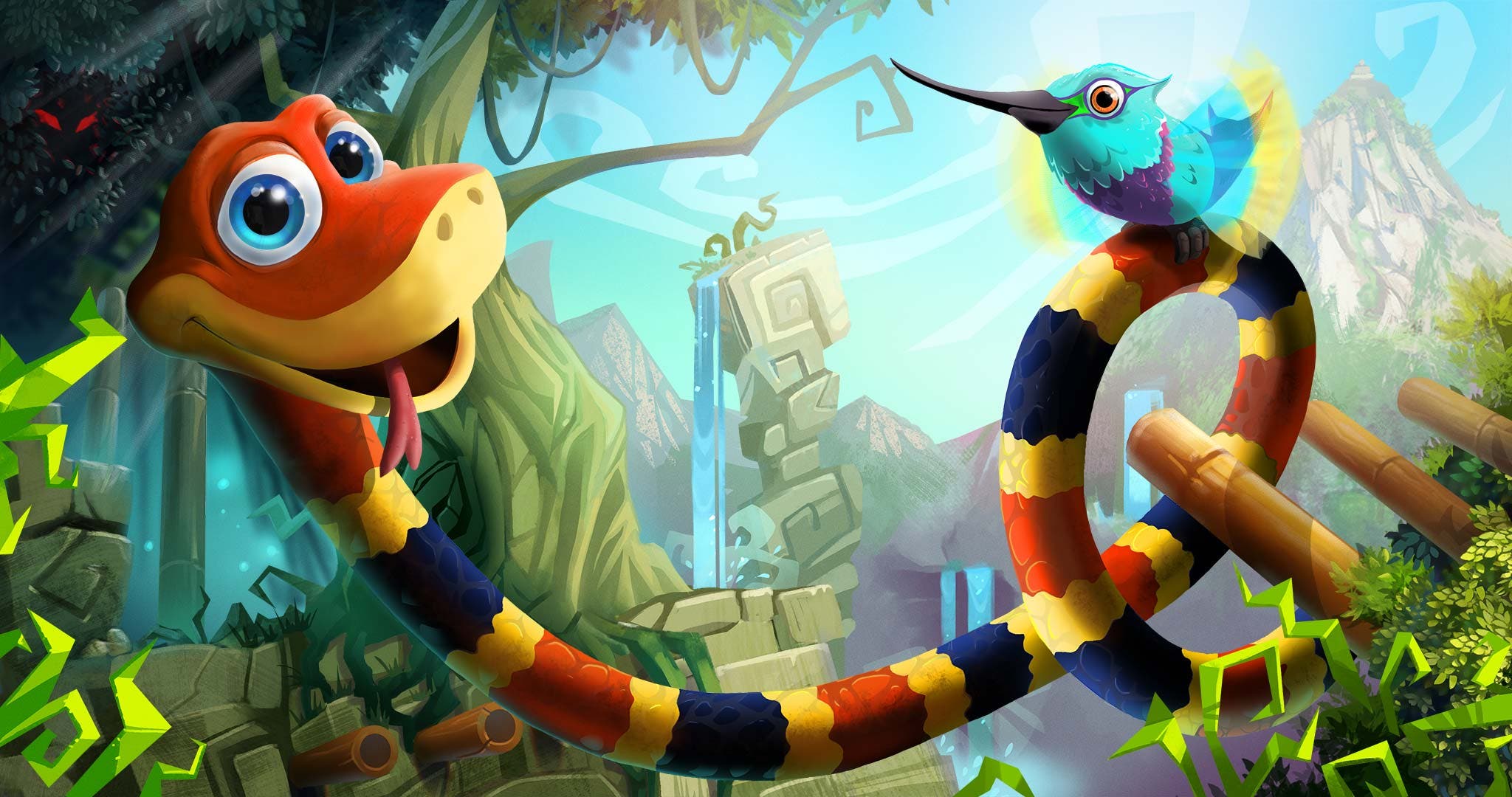 Snake Pass is both a visual delight and a challenging platformer from Sumo Digital. The controls are unique and take time to learn the intricacies of moving a digital snake around as if it were real. The attitude to this platformer is nostalgic and refreshing in the same breath. Snake Pass will be referenced and remembered for years to come – it’s quite the snake charmer. Snake Pass features an aesthetic similar to Viva Piñata, but the similarities end there. You play as a snake named Noodle, and have a hummingbird companion named Doodle. Together you set out to work together to climb obstacles and collect everything you can. Snake Pass features simple controls with complex usage. You move forward by pulling the right trigger like you would a car in a racing game, use the left stick to move Noodle. However, simply pushing forward is not enough, as you’ll have to move it left to right in a slalom-like fashion to gain the most speed moving forward. This is snakes on a chicane. All the movement is physics-based, and it really feels like Noodle has a weight to him. Doodle can pick-up Noodle’s tail to help get into a spot but can be a curse over blessing. Additionally, Noodle can grip objects to tighten his hold as to not slip off when performing complex climbing.

The goal of every level in Snake Pass is to collect three keystones, which are different colored gems that opens a portal to the next level. There are four realms, each not very visually distinct from the last, but increase in more challenging vertical episodes. The first realm is clearly designed to be a clever learning tutorial. Levels are designed in a way that the goal can be accomplished almost in any manner, from climbing up as anticipated, or making risky “jumps” from one platform to the next. Aside from the keystones, a large number of wisps and a small amount of coins must be collected. Both are optional, but wisps are visible and hidden from plain sight to gather, and coins are dangling over an edge that may kill you if you don’t have the proper grip. Snake Pass is certainly frustrating at times, but that subsides the more you play and the controls become more natural. You can save mid-level using manual checkpoints that can reset you to a spot before you fell to your death, which will happen more often that you’d care to admit. The underwater segments are really cool looking, but hard to control in addition to what Snake Pass asks of you. As if that weren’t enough, completing a level unlocks a time trial mode for it to gather the keystones in the shortest amount of time.

The camera doesn’t always lend itself to let you see obstacles in your way to know how to navigate them, but Snake Pass at least gives you control to move it, in the event it doesn’t do what it should. You can’t help but wonder about the timing of this game and other inspired platformers of days gone by. David Wise is the composer on Snake Pass, and his work on the Donkey Kong Country games is certainly heard throughout the jungle realms in the game. For everything Snake Pass asks of you in controlling Noodle, it never imposes a time limit or reason to hurry up. You can play at your own pace and still get the same enjoyment out of it. There’s certainly modes to accommodate a reason to play faster, but Snake Pass is a game about relaxing rather than stressing. While Snake Pass can be frustrating, it is more rewarding to get the controls to work to your liking and collect everything available in a level. Snake Pass is a unique platformer that is equal parts skill and chill.