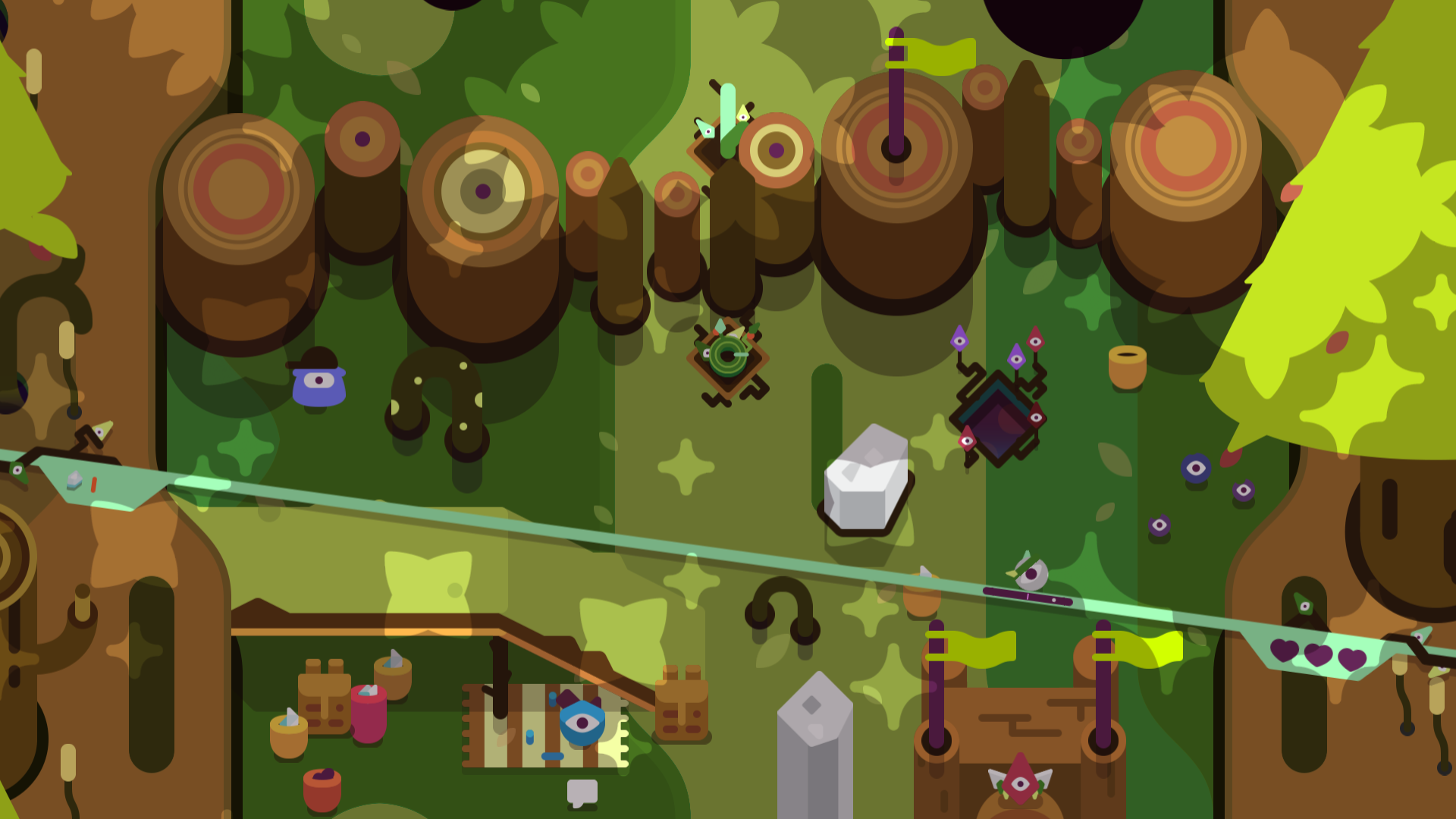 TumbleSeed is a vicious game. Don’t let its visually bright and interesting colors fool you. This game is hard as nails, and TumbleSeed is not afraid to let you know it. TumbleSeed is a roguelike that intends to be difficult, and demands to be replayed until you get it right. It’s also a game that played in short bursts won’t yield results, but longer play sessions will show gradual improvement. Which is at odds because coming short so many times is bound to frustrate even the most patient players. The inspiration of TumbleSeed can be seen in the original Taito mechanical arcade game from 1983, Ice Cold Beer which featured similar gameplay. It was a physical board with holes to try to score points with, and TumbleSeed follows closely with that – only, you’re trying to avoid the holes at all costs while you get scored as you make you’re way up the mountain. There’s a constant balance to the controls of TumbleSeed, and it takes a bit to get accustomed to the controls. There’s only two of them, the left and right thumbstick. Playing the game on the Switch, there’s surprisingly no tilt controls, but perhaps that’s for the best. The underutilized HD rumble on the console gets great usage here, as you feel the texture as you make your way up the mountain. The controls always felt sluggish or off, even after adjusting the deadzones. I could never tell if it was the game or me that didn’t have it right, but I just never felt in control in every scenario.

TumbleSeed is a roguelike type of game, more specifically run-based. You work to roll a seed up a mountain through four or five different biomes through the game’s adventure mode, which serves as a campaign, of sorts. There’s a hardcore but casual mentality to the game. The developers seem to want you to think carefully and be proactive rather than reactive when playing. It’s downright hard to progress, but TumbleSeed is relaxed enough to just let you get there when you can. TumbleSeed has daily challenges which doesn’t seem to differ from the core game except for it lacking the randomization and each player getting the same “run”. There’s corresponding leaderboards for the daily challenges, but leaderboards for every day to see who best who among friends and strangers alike.

You start out each run in TumbleSeed with three hearts and one crystal. Crystals are your currency, and hearts are your life. You have four basic powers: heart, crystal, thorn, and flag. Heart lets you earn more hearts to increase your longevity on the mountain, crystal accrues currency to be spent on other powers you have or obtain, thorn lets you build defensive thorns to kill enemies, and flags let you plant a new starting position for your remaining hearts to use. My playing strategy was to start with collecting as many crystals as possible, then switching to thorns to protect myself, then hearts to build up health, and then finally try to plant a flag when I got far enough. You’ll come across vendors that make it the only time to ever go in a hole. Vendors will have one of many (up to 30 seed powers) to obtain, such as the spring which bounces you up in the air and lets you coast a little, storm which causes rain, flood which fills holes, or toxichoke that poisons nearby enemies. Vendors let you try before you buy, so you can learn what they do before committing. What’s odd, is that these vendors only offer temporary powers as they do not reappear if you run out of hearts.

When you get hit in TumbleSeed, there’s a moment of serenity as you’re given a reprieve from the onslaught of this treacherous mountain. Upon taking a hit, you’re bounced up into the air and able to plot where you want to land, allowing you to get some minimal free progress. But once you land, you’ll be reminded that the game wants you dead almost immediately. Aside from avoiding the holes, there’s creatures that home in on you, swarm around you, hop on you, or the worst offender, the creatures that blow up when you’re in proximity to them. TumbleSeed does not mess around.

TumbleSeed was not kind to me at any point while reviewing it. It doesn’t seem like an especially long game, but given its nuance and demanding skillset, is a game you’ll be returning to often. It’s frustrating, beautiful, and unforgiving. There’s a good game here, but I feel it’s upfront difficulty is going to be off-putting for many. But by not playing TumbleSeed, you’re missing out on what is otherwise a unique roguelike that doesn’t shy away from its difficulty, but embraces it to the fullest and tasks you with a challenge you’ll want to overcome each time you play it.