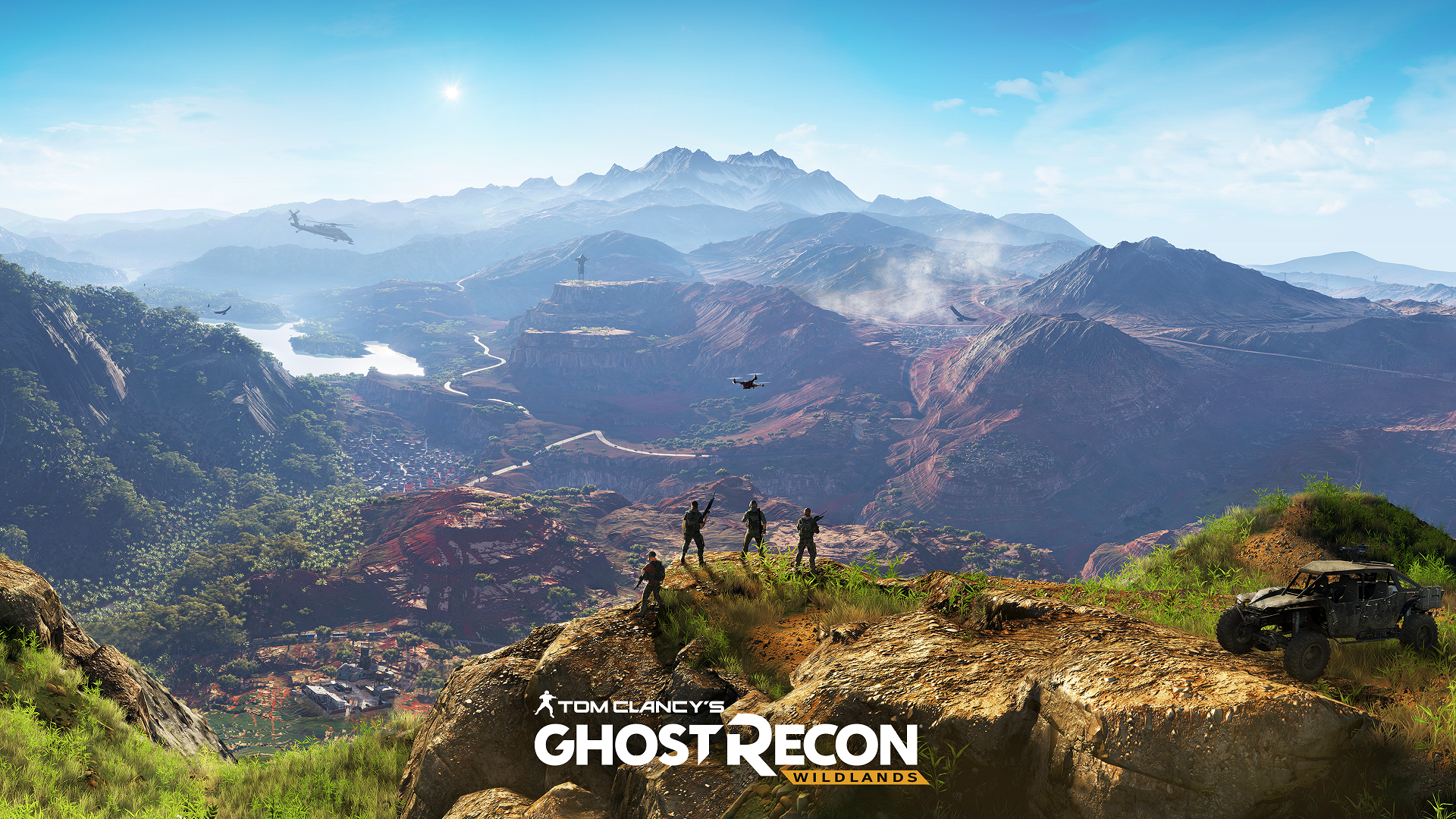 Ubisoft’s depiction of Bolivia in Ghost Recon Wildlands is gorgeous. It’s got the lush greens of jungles, snowy whites of the mountains, swamps, salt-flats, quarries, and caves. Travel anywhere in this giant sandbox and do anything you’d like. One could say, feel free to go… Wild. Ghost Recon Wildlands’ map is the largest I’ve seen to date. Without actually measuring myself, it has to be larger than something like Grand Theft Auto V or even this year’s The Legend of Zelda: Breath of the Wild. It would easily take over 10 real world minutes to travel from one side of the map to the other and that would be by air; I couldn’t imagine how long that would take walking. You’ll notice right away, the map is split into about 20 different areas. Each area has a boss to take down and each of those bosses are separated into groups. Things like Manufacturing, Security, etc… Take down all the bosses in a group and you’ll target the group leader. When you take out all the groups, you go after the big man. Each of these areas are packed with roughly six Santa Blanca story missions, multiple side-ops, and a load of unlockable weapon caches & collectible skill point upgrades. The game does throw you a bone by planting random bits of intel in each area to find. From documents to people to interrogate, these will unlock map markers showing you the locations of any of the previously mentioned objectives. It was a breath of fresh air for a game to pop markers on the map for me to waypoint to. It seems to be a trend these days for games to show you a general radius of where something is, while making you walk all over to pinpoint a location. I’m looking at you Breath of the Wild. Sure, for some people it’s fun to find something on your own. But with so many things to do on the map, I’m glad Wildlands respects my time in that way.

It’s a good thing too as this game will keep you busy. Not only do you have all those objectives to complete, but exploring the whole map can be rewarding in its own right. You’ll find large bases to raid, a plethora of vehicles to drive, and some random scenery that screams “Oh My”. These biomes aren’t just eye candy either, they can have a significant impact on the way you play. You can use the thick foliage to hide from enemies, camp out on a high cliff to snipe a fortified base, or grab a quick vehicle to make it in and out of a flatland as quickly as possible. Basically Wildlands gives you that proverbial sandbox to play in. Write your own book, create your own adventure; anywhere, anytime. Ubisoft doesn’t hold you back, difficulty may keep you out of certain areas but you’re sure as hell free to try.

The best way to get around Bolivia is vehicles and with a map this large, be glad the devs peppered them all over the place. You’ll spot them on your mini-map, so they’re that much easier to find. Once you do, don’t expect Colin McRae Rally or anything. Hell, don’t even expect Ubisoft’s own The Crew; the vehicles handle terribly. The cars are, for a lack of a better term, swim-y. The back end comes around easily and the car overcorrects way too easily. A combination that makes high speed chases through thin dirt paths rather tough. Helicopters give off a great first impression until you realize there are no separate rudder controls, making rotating the chopper a inconvenience. That’s not to say it’s terrible, in fact it’s my preferred method of getting around Bolivia. I’ll mark a weapon cache or some intel on my map, hop in a helicopter and fly over. It takes a while to nail the feel of these vehicles, but you could say that the controls add to some of the charm of this game. Especially when playing with a squad of your friends. But more on that later. There is a downside to all these vehicles though, you’re not the only one to have access to them. There is the possibility that your target gets scared and runs off in the nearest vehicle. But as long as you can still see the target, and you’re not outside the world boundaries, you can theoretically chase them forever, so best think of a way to stop them or let them flee.

As a solo experience, Wildlands doesn’t offer much other than the same few activities over and over. With no friends to rub off on, it can get tedious and repetitive rather fast. Story missions usually are a combination of: blow up an object, interrogate or extract a target, steal something valuable, or kill targets. Speaking of targets, there are only two real enemy factions in this game. The Cartel and the Unidad Force. Think of the Unidad as this world’s cops and you can get the gist of their purpose here. Unless you’re doing something you’re not supposed to, they will just walk right by you whereas Cartel members will just shoot you on site. The variety of targets one can shoot is pretty generic as well. You get your standard un-armored grunts, the heavily armored guys, snipers, and helicopters. Headshots are key if you want to take people down without much fuss. There are a few soldiers you’ll meet who will require an additional bullet to the head to make things a little more challenging. In the solo game you get three AI controlled teammates and they’ll help make the game a breeze to walk through. Using the game’s Sync Shot feature, you can wipe through a base without having fired a shot. Basically, Sync Shot is marking a target for your men to shoot. With upgrades, you can get up to three Sync Shots, one for each squadmate. So you can imagine that if you hide well enough, you can use your drone, spot three targets, have the AI shoot, wait for the ability to recharge, and rinse and repeat. This makes wiping through heavily guarded bases a snap and, as some have complained, makes things too easy.

But this game wasn’t designed to be played by yourself. More often than not, games are better with friends and Wildlands exemplifies that. With the game’s sandbox nature, the co-op experience allows you to create your own stories within this world. Not in the sense of a story creator or anything, but that you get to script your own narrative with your friends in tow. You know how the the mission is supposed to end, but boy can it be a wild ride getting there; plus you don’t have to hear the cringey dialogue of the AI squadmates. Trust me, it’s bad. The game becomes harder without the AI controlled squad though. Unless you have a party of 4, you’ll be down a man or two and then it’s all about working together. Or maybe your friend “Bill” runs off to go find a weapon part. Just as you get caught up in a firefight trying to steal a helicopter you had just 5 minutes earlier discussed with him. It was so we both could get resources for an upgrade that he needed but no. I’m not bitter, oh no… So yeah, with one or more additional human controlled characters on the loose, chaos can ensue, especially when everyone has their own bright ideas. Bill… What’s interesting is that it’s honestly not that far off from what Ubisoft depicts a co-op game session to be like on their E3 stage shows. When everyone is on point and working together, I found me and my squad to be calling our shots and tracking our targets just as ridiculously as Ubisoft portrayed it to be.

The Sync Shot still appears in co-op but it’s implementation is far different. Rather than automatically shooting the synced targets, you’ll use it to call out whom it is you’re aiming at. Once you lock a Sync Shot, your crew will see the icon above the targets head, letting them know that’s who you’re aiming for. Co-op is drop-in, drop-out, and it works pretty seamlessly. You don’t have to wait around in a lobby for someone to show up. You can be inside your world and friends can just spawn right in, no loading for anyone already in the game. Also, this game does a great job about player progression. No matter where you’re at in your play through, you can still accompany and complete missions you may not have opened up yet. So if you want to join your friend in their 50 hour play through as they attack a high ranking officer, go ahead! In fact, you’ll also get to keep and experience, collectible items, weapon parts, and story progression made into your own game.  If someone in your game has found a fast-travel point you haven’t, it’s available for everyone to use. The system works well and keeps the game’s momentum high.

The game’s upgrades are fairly incremental. Weapons will cause more damage, scopes will get better, new explosive types to use, faster heals, and more. They won’t change the way you play all that much but unlocking an explosive drone or the ability to call in a helicopter at any time sure does have it’s benefits. To go along with those upgrades, you have a whole warehouse full of weapons at your disposal. There is no doubt in my mind that anyone will be able to find a set of weapons to fit their own playstyle. Even if you don’t particularly like a certain gun, Wildlands offers a wide selection of weapon parts to unlock and find. Use them to help customize all but a few weapons to your liking. You’ll end up finding most of the parts lying around the world in weapon caches. Just gotta find the intel markers to help show you their locations. The controls are tight for firing weapons, it feels comfortable to aim and shoot. There is gravity to your shots so don’t expect to hit a headshot from 300 yards away without aiming higher. Which brings me to the odd thing about this game. It toes this strange line of realism and fun, a line that most games attempt but get wrong. Wildlands get serious when it needs that realism, like in the physics of your shots and the way you can be spotted. But doesn’t forget for one minute that this world and it’s premise is just so ridiculous. You’ll see once you start meeting some of the characters this game portrays. Wildlands knows you’re going to get your friends together and run cars into gates, this game knows you’re going to try and hit outrageous shots; and this game knows you’re going to try and do a barrel roll in a plane, crash right into the ground because you didn’t realize you had to invert your sticks when upside down, all while your passenger is yelling at you that it’s not called a barrel roll you moron and is now throwing grenades at your respawned body because you were both killed needlessly, BILL.

This world is huge and there is so much possibility to be had in game. It’s so much fun and it never takes itself too seriously. There are flaws but nothing that will take away from the overwhelming fun one can have. Even by yourself you can have a good time, but bring some friends over and make it wild night. Except for Bill.