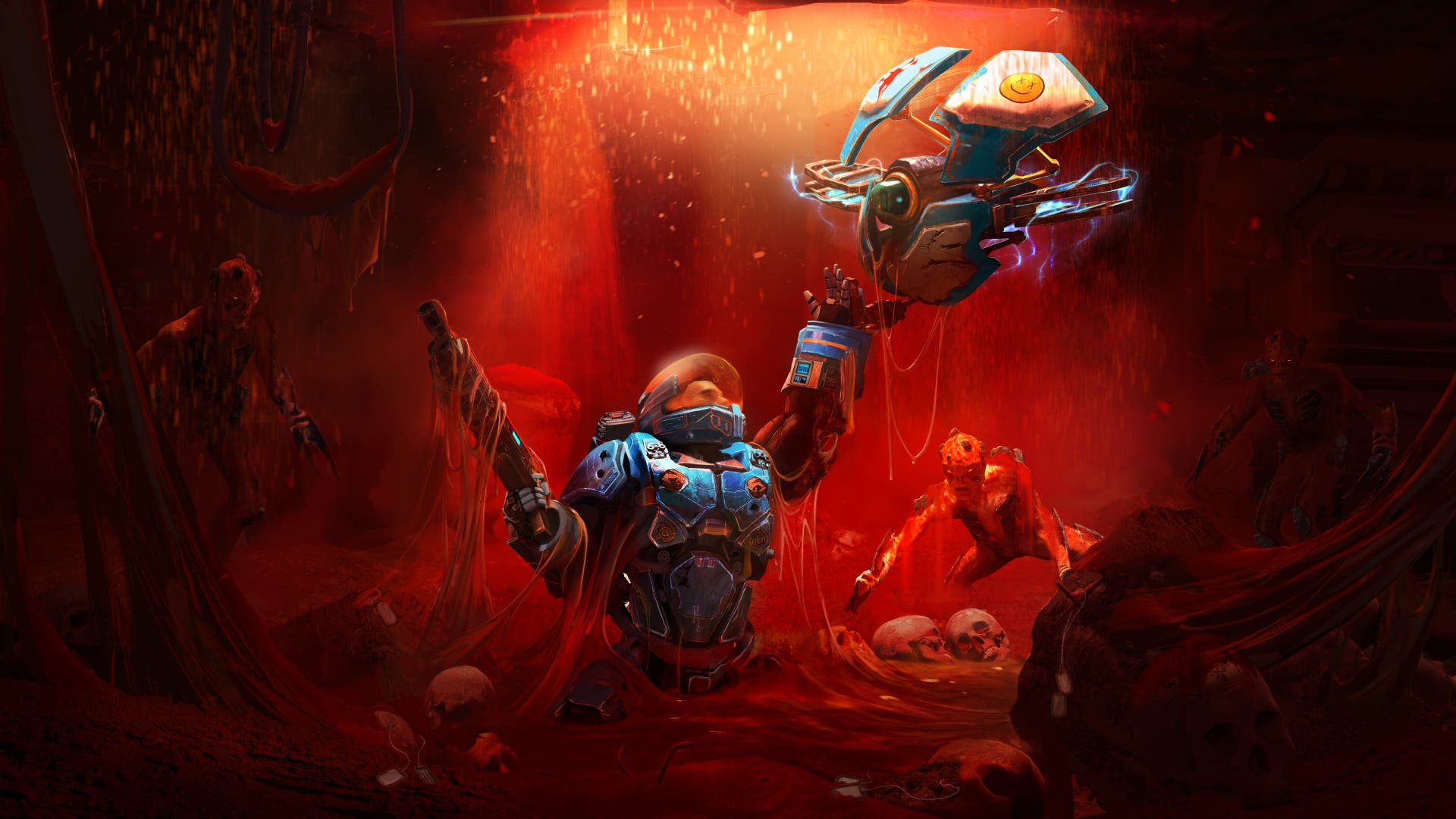 Ironward didn’t simply make a sequel to The Red Solstice, as Solstice Chronicles: MIA is a twin-stick shooter, which certainly changes up how the game is played. Solstice Chronicles: MIA puts a twist on the genre through its difficulty management via drone skills. While survival and tactics are ever-present here in Solstice Chronicles: MIA, the core shooting feels better than ever as you work alongside the drone that accompanies you throughout the story and survival modes. The connections in the Solstice lore continues as Earth’s survivors have thrived on Mars, and are fighting for survival, which the game reinforces through its missions.

There are four total abilities you acquire with your drone. “Scout” is used to retrieve supplies from the nearby area. This is useful when the game’s difficulty is low, because using this ability will raise it. This is in essence saying you are ready for more combat. “Bomb” is a great area of effect clearing weapon, that has a high recharge timer as it also increases the difficulty. “Taunt” is an interesting one, designed for use when the odds are stacked against you, will start a wave counter to fight creatures off, and successfully fending them off will reduce the difficulty. “Block” is the final ability, and is used when surrounded and you need to keep the pressure off of you, and can lower the difficulty. There’s a ‘push / pull’ mechanic here that lets you ramp the difficulty up or down in a way that gives you real control. The story was clearly designed to not only further the Solstice narrative, and to also teach you how to play and prepare for the Survival mode. The dialogue in Solstice Chronicles: MIA is rather disappointing. It comes across as clearly written in 2016/2017, and simply doesn’t work with the game taking place several thousand years forward in time. It would have helped if they tried to simulate how people might converse with each other, and robotic AI in the future. That didn’t happen, so there are references to modern phrases and memes that only would be said today, and ruin the immersion that it could have had.

Solstice Chronicles: MIA does not give the player time to do much resource gathering, for difficulty and tension reasons. Supplies will often run low and you can use the drone to gather more, or go off and find some. However, in doing so you may stretch yourself too thin and stray too far away from turrets that can help bring in more firepower. There are weapon upgrades that can be picked up that can increase their effectiveness. In addition, you can pick-up consumable mega-weapons like the auto-cannon that will let you carve a path to safety. There’s also profile leveling that will allow you to put points into. Later leveling will let you invest your points where there will be cases where ammo won’t be consumed when you fire – making it a necessary skill upgrade, and one that starts to reward the player for their time investment.

There are are four classes of characters to play as: Assault, Demolition, Hellfire, and Terminator. Assault was the character I spent the most time with, and is the most well-rounded. Demolition is focused on wanton destruction, but plays more of a support role than a primary one. Hellfire was unavailable in the review build for whatever reason, which was not clear. And finally, Terminator requires completing the game to use which I did not do, so I was unable to test this class out. For what’s here, everything is pretty standard, and in a co-op setting, having all four would prove to be very balanced. Since the co-op is local only, I was only able to see the game solo.

In an unfortunate decision, there’s separate class or character profiles for story and survival modes, which means you don’t level a single character the same. This feels like wasted efforts if you bounce between the two modes, or complete one mode to start the other. The game then feels disconnected as much as its modes are. Solstice Chronicles: MIA encourages using tactics and forward thinking in a genre that wouldn’t normally have it, and the drone is a really neat addition, but it isn’t a compelling enough reason to play. The lack of online co-op which made The Red Solstice a standout is curiously absent and supremely disappointing. Solstice Chronicles: MIA is a twin-stick shooter that doesn’t leave a lasting impression, either due to its writing or ho-hum gameplay. While it plays better than its predecessor and offers a unique gameplay hooks, Solstice Chronicles: MIA doesn’t do enough, and there’s better offerings out there that are more fun to play.