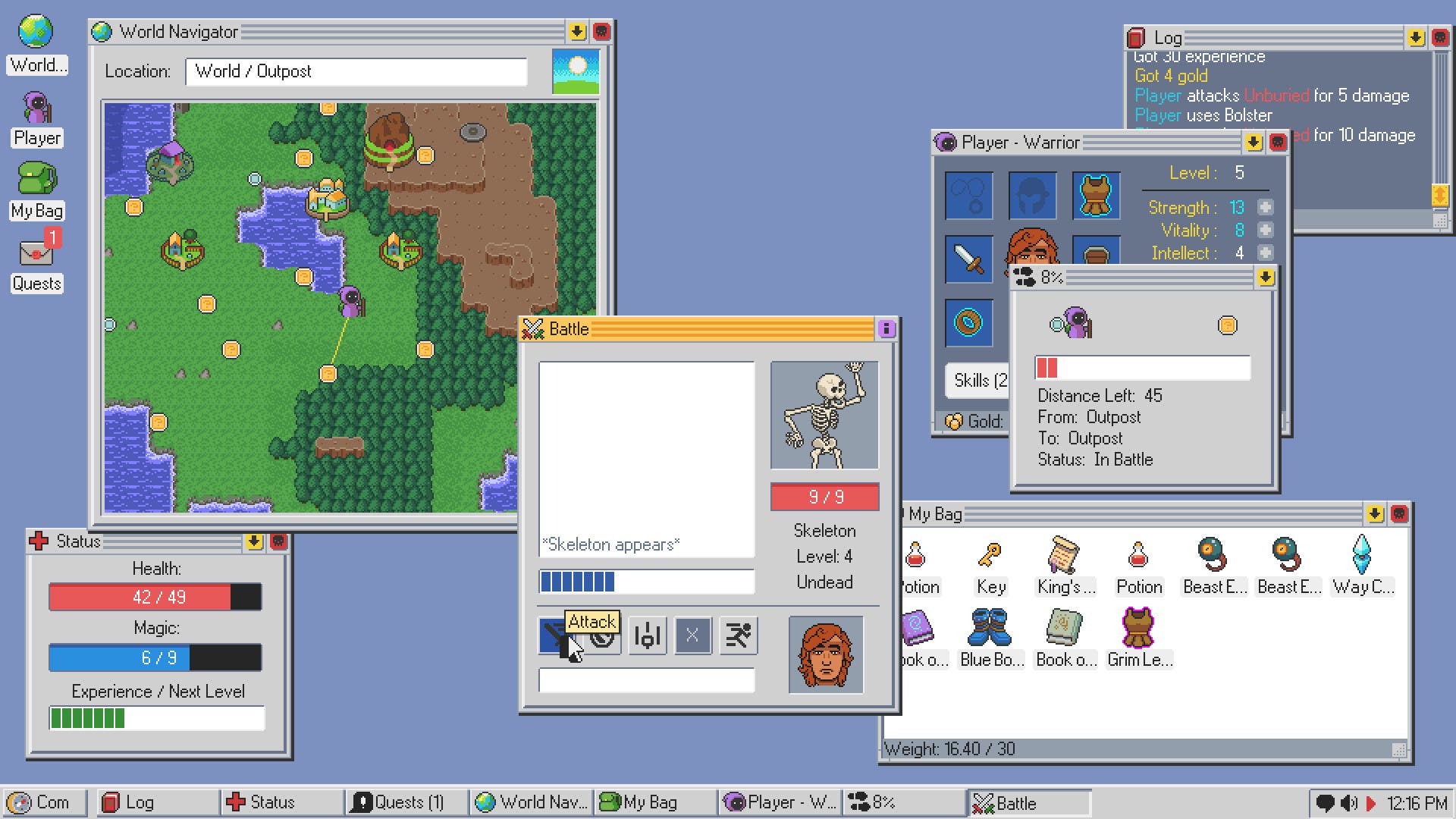 Kingsway is a roguelite, with some really neat permanence that makes this a unique title for the genre. You can play as five different classes: Adventurer, Warrior, Mage, Rogue and Beastkin. You can import custom avatars to give your characters a unique look. From there, you name and create the character, and are loaded into the Windows 95 OS-like with accompanying startup sound. Kingsway does more than be cute about it using an OS, the OS is everything to playing it. It’s no mere shell, it is the heart and soul of the game, and what makes it work so well. In a lot of ways, Kingsway is a game within a game.

When the Kingsway desktop loads, you get a map, inventory, character sheet, music, and quests. Each of these things have a correlation to an OS, and feels natural when using it. The learning curve is low because you already know the basics of moving things around and using its elements. Opening the World Navigator (like Netscape Navigator) opens the game’s map, and this is how you traverse the world, inspect areas, and more. There’s a cool midi-like music player in the game, that recalls WinAmp. Your emails are quests, and read like chain-mail spam that took over the late 90s with your relatives sharing things because they are superstitious. Going beyond the desktop, any status effects you acquire (like being poisoned), will appear in the system tray with a unique icon and tooltip for what has happened. Thankfully there’s an antidote you can take or buy from a shop to counteract it. In the event something gets hidden, the start bar (or whatever the game’s equivalent is called) holds all open programs that you can switch between. The gameplay of Kingsway seems simple on the surface, but like an operating system itself, there’s depth that powers its quirks. As you explore and traverse the map, you’ll be stopped for for an event. Some events are straight up combat, others are conversations, and perhaps traders. Some of these you can de-escalate or get away from, but combat is more or less the main system in Kingsway. In the combat, the game uses windows and pop-ups to great effect by requiring you to catch a moving window to press a button to avoid an arrow, rock, or some other hazard. Each moves in a unique pattern that you will recognize over time, but will be a frantic exchange when trying to stop being hit by a bomb and continue attacking your primary opponent. There are some sneaky uses of the window treatment, like the shadow bandit who closes your windows and the phantasm who minimizes them. While we’re on the topic of windows, I really wish the game would remember your window placement between runs. I understand they are new characters, but I like where I had everything, and I wish the game would have made a concession here. With enough combat, you’ll level up and can spend points to boost attributes and learn new passive and active skills to help you more powerful during combat.

The purpose of traversing is to complete the goal of the game, and that’s to find three beacons, and light them and return to the king. If you’re lucky, you’ll get a map that shows you where they are, but that doesn’t always go as planned. Along your travels, you’ll come across abandoned houses. These places hold treasures, people, and more often than not, combat. You’ll come across many of these in each run, and are more or less the same. They are great respites for a free stay to regain health. At times, the game feels like a text adventure as you’ll have conversations with random folks. There are dungeons that house tougher enemies, but bigger rewards. It’s a shame that like the abandoned houses, quests in the game can get repetitive as well. That said, you at least know how to complete most of them with subsequent runs.

Death comes often in Kingsway, and does so in glorious fashion with a bunch of overlapping and erroring prompts until it reaches a blue screen of death (BSOD) screen. It’s here you learn about your character’s fate and how long they lasted in the game. Should you not die, there are multiple endings to Kingsway that encourage replays more than its multiple character classes.

The metagame and permanence comes in with gems. You earn gems from your playthroughs, and can spend them on appearance items like themes for the operating system, and cursors. Or you can spend gems on unlocking new gear to start with at the beginning of runs. Or perhaps the most important, using gems to unlock hotkeys to quickly open up the map, character screen or being able to press Tab to cycle through all open screens. Kingsway is ingenious, simply put. It has a brilliant attention to detail that is well-thought out. I implore you to play Kingsway to see it for yourself. It doesn’t entirely rely on its nostalgia for it to work. There’s a bit of repetition in its encounters and quests, but that’s really a small issue in what’s a largely enjoyable and highly replayable game. You’ve not played anything like Kingsway before, and it is a game demanding a place on your hard drive that will stay for the foreseeable future.