The game is accommodating to new players, and recaps the events of the first game, The New Order. For those unfamiliar, it shares some baseline similarities in its premise to that of “The Man in the High Castle”, but is decidedly different. It’s a what-if scenario where the Germans had won World War II and have occupied the United States. William Joseph “B.J.” Blazkowicz led the revolution to overthrow this, and nearly lost his life in the process. There’s a lot going on in the beginning of The New Colossus, from picking up right where The New Order left off with a mortally wounded B.J. to showing flashbacks of his childhood. While only giving a modicum of choice, B.J.’s early childhood is absolutely disturbing, but enlightening.

Initially shown at E3, we start off by playing as B.J. in a wheelchair. Even though this was shown at length earlier this year, knowing what the beginning of the game is nothing compared to actually playing it. The wheelchair has momentum, and it just feels great. Then, things shift some more and you have to make a choice like in the first game. If you’re playing this series for the first time, you’ll have the same context for the lives when you played The New Order (which was none), but for those who have, you’ll now have some weight in these decisions. The alterations of what happens determines weapons available to you, you get a fireball throwing weapon called the Dieselkraftwerk if you save Wyatt, or the Laserkraftwerk if you save Fergus – and shakes up the group interactions, similar to The New Order where certain characters just never appeared based on the choice made. The seemingly unkillable Frau Engel returns, and makes life even harder for B.J. He obtains some special armor that allows him to escape, and sets off to start one hell of a revolution from within the United States of America. This campaign goes places, both figuratively and literally. for surprises that are left as they are meant to be, it is so worth seeing all the way through. 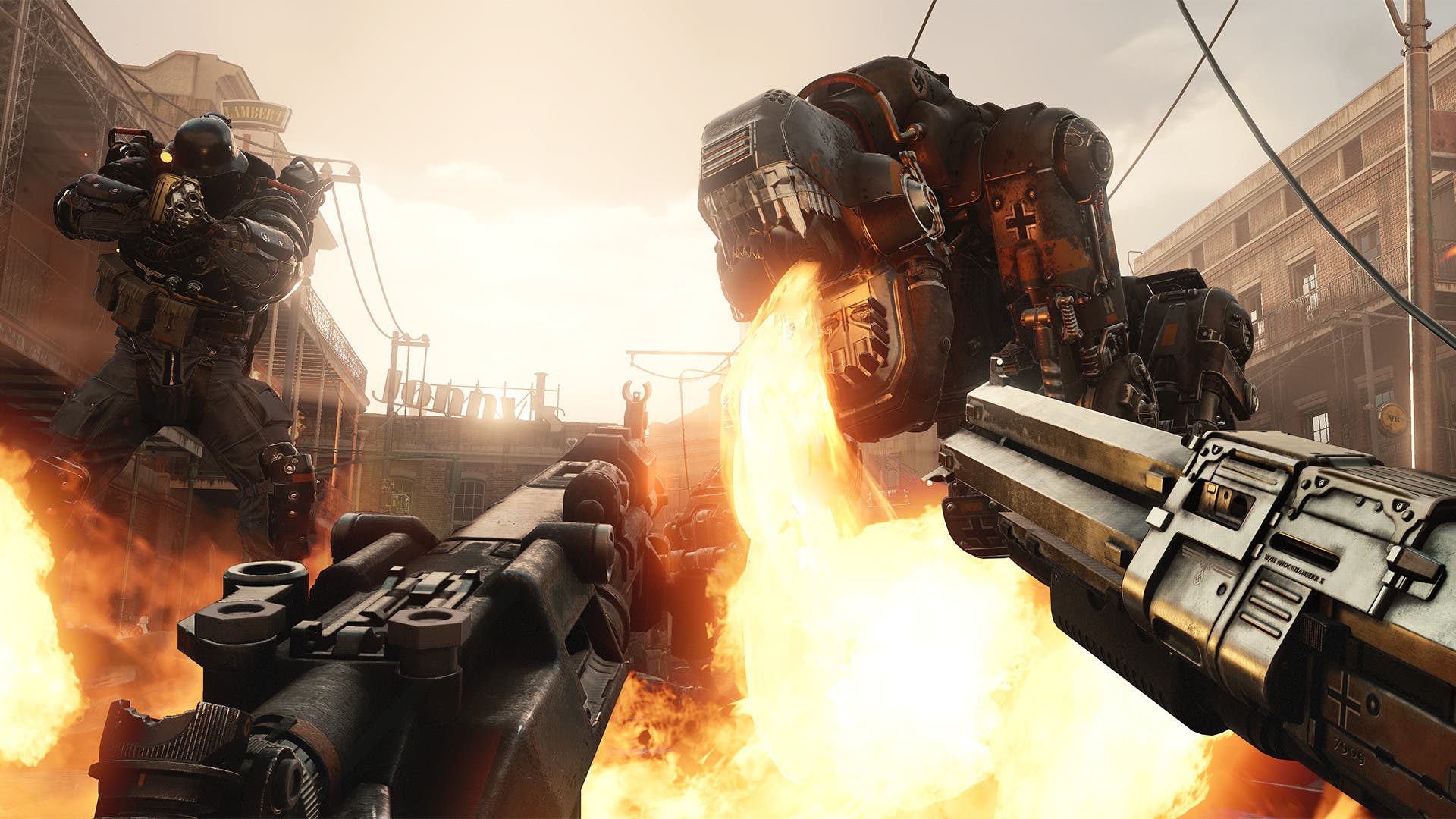 Between missions, there’s non-combat areas you can explore that feels a lot like Metro 2033 or Fallout at times. They are the game’s respite from nonstop violence and bloodshed. The New Order‘s only solace from the action was at the Kreisau Circle HQ, and so is the same on the U-boat you have, the Evas Hammer. The New Colossus even lets you do this in one of the game’s major missions, where you are able to walk around (in disguise) and absorb the environment.

The Nazis refer to B.J. as “Terror-Billy”, and it’s so delightfully perfect. It is said a lot, but never gets old. There’s a sense of passion and patriotism that gets reinforced rather heavily, but rightfully so. B.J. and crew are “celebrities” of sorts for the Nazi resistance. Many of who you see are established characters, and exist all for the right reasons. Along the way you’ll recruit new and interesting members that provide levity and humor in dark times. It’s all very touching how close they get as the game progresses. The emotional weight and stability of the writing and voice delivery cannot be understated, you believe everything they say.

I have no qualms about shooting, shredding, exploding, or disintegrating Nazis with impunity. Wolfenstein II: The New Colossus has many tools at your disposal to do so, with the standard fare of pistols, SMGs, assault rifles, and shotguns, alongside some special heavy weaponry can be catastrophic to the innards of every Nazi you meet. The dual-wield system has been enhanced in which you can now mix ‘n’ match weapons, allowing you to create devastating combinations. The game supports it, and while stealth is not always the greatest, I’ve definitely been able to clear a whole area with a completely silenced pistol (after having upgraded it). Commanders will be overseeing areas offering resistence. You’ll receive information about their distance and once closer, their direction. If you don’t kill them fast enough, they will trigger the alarm and call in backup. Stealth is only half the fun, there’s something immensely satisfying about clearing a train full of Nazi’s while dual-wielding shotguns. I say this because this train level is where you obtain the shotgun, and when you do, you know what to do with them. When the Wolfenstein II hands you a gift, you best open it up in front of everyone.

I died a lot on the default difficulty, this partially due getting used to the game again, and B.J. only having 50 health throughout the game. Now, there’s reasons I won’t go into about that, but he’s not in a good way having almost died. Though, the game isn’t great at showing you how low health you are. I mean yes, I get it, there’s a HUD with a number representing my health. And while I don’t need jelly on my screen, I would like a better indication of how bad off I am – it’s just too subtle here. Something that didn’t annoy me in The New Order is fixed here, and that the game will auto-pickup most health, armor, and ammo you find. You can still manually pick it up if you want, or if it is in areas you can’t walk over easily. Amongst many collectibles like gold, star cards, enigma cards from fallen Commanders, are weapon upgrades. They are rare, and you have to look carefully to find them, but amplify your arsenal in great ways to provide alternate fire capabilities for every situation. 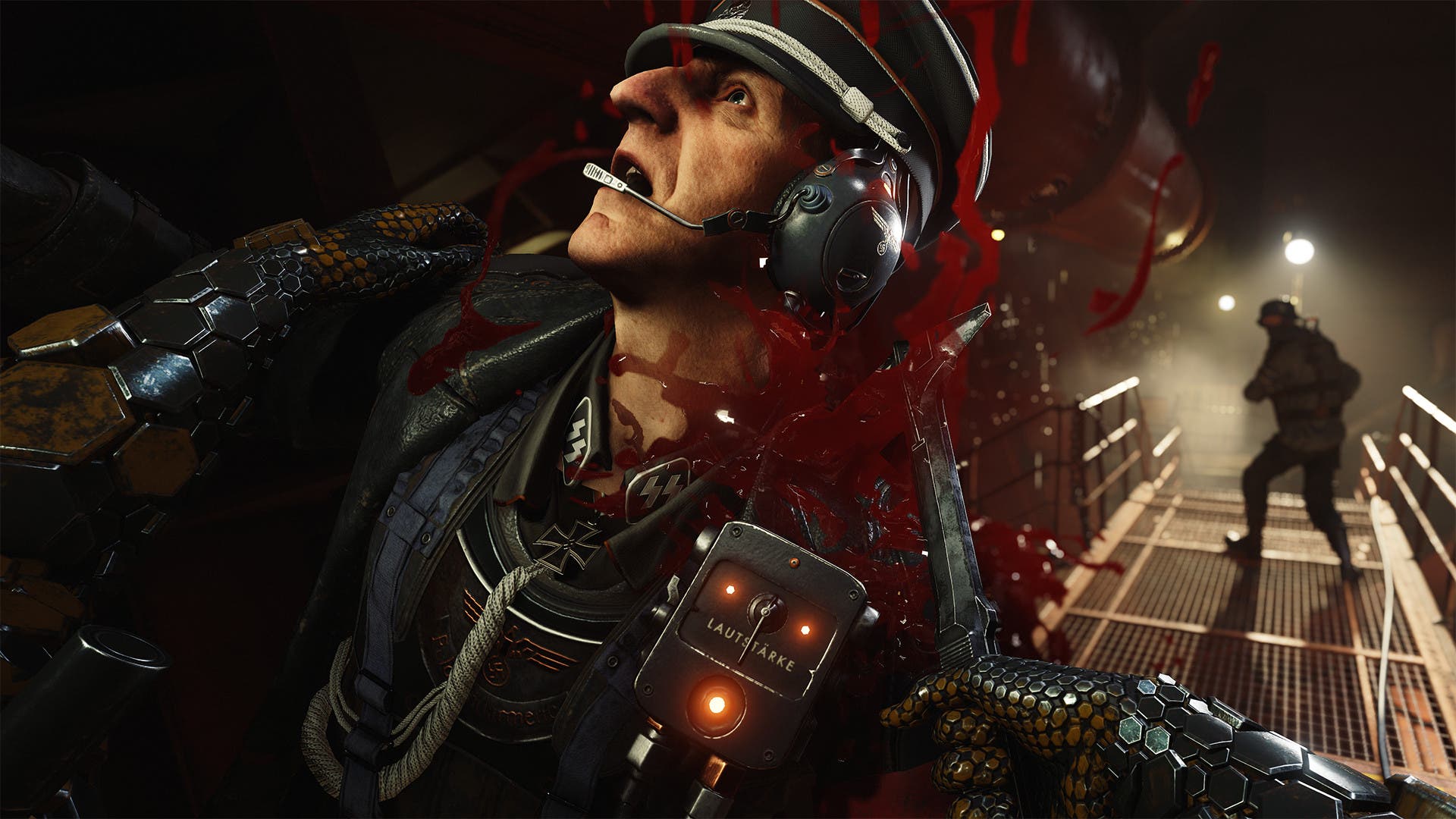 Wolfenstein II: The New Colossus continues The New Order’s perks system. In that, you will earn perks or benefits to how you play the game. Broken down into three different ways, you will earn things like faster movement speed while crouched, slower ticking down health when overcharged, and more. Rewarding players for how they play almost passively is genius. There’s no sense to earn an ability point at the end of the level and then feed it into a tree when the game can pick it up.

Each of the Nazi bases are hard and cold, with steel everywhere. There’s no personality in their design. But then you travel to places you don’t see often, like Roswell, NM or Mesquite, TX and seeing altered structures. Everything looks lived in and carefully structured in that Wolfenstein II‘s design all around can be called purposeful. Nothing was wasted or made for arbitrary reasons.

I did have some initial issues pre-release and shortly after post-release, but thanks to both a game patch and NVIDIA “Game-Ready” drivers, those issues have been completely dissipated for me. Running on the Vulkan API, Wolfenstein II: The New Colossus looks and plays amazing. I am really satisfied with my performance with the game.

Wolfenstein II: The New Colossus has a campaign I highly implore people play. The pacing is all over the place, but its quick emotional shifts are to the game’s benefit – one moment has you seething with what you’ve just witnessed, and others have you laughing at the well-timed humor in contrast to a world so wrought with evil. Bethesda has resurrected the most iconic first-person shooter franchises as of late, and MachineGames have elevated the genre with Wolfenstein II: The New Colossus.