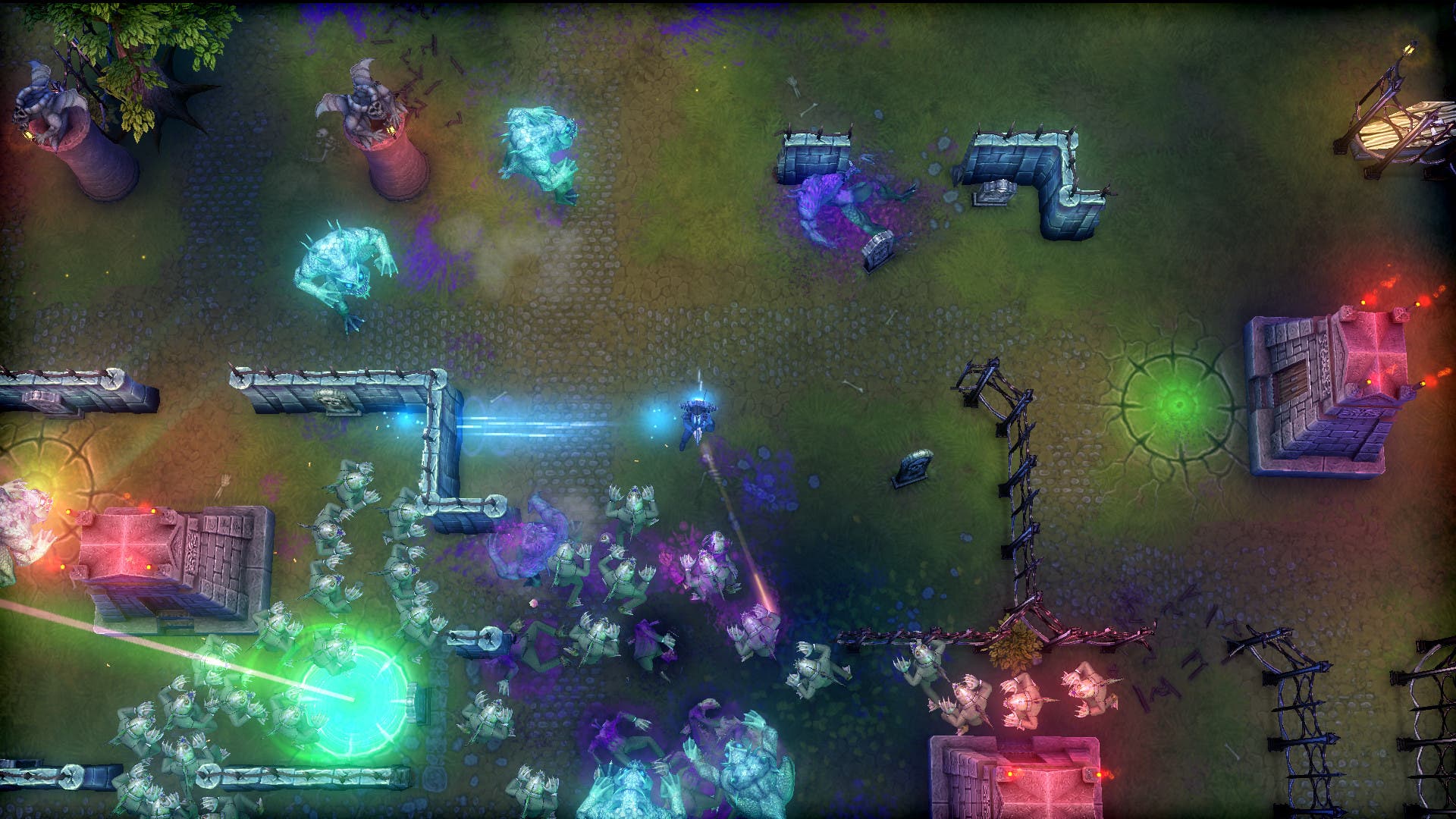 Venerable developer 10tons Ltd has been doing the twin-stick shooter thing for a while now, and doing it well with variations on the formula that offers a fresh take with each release. Tesla vs Lovecraft is no different, and while it is a lot like what’s come before, it has a renewed sense of energy towards each element of the game. Tesla vs Lovecraft features a great assortment of weapons, perks, and abilities to keep you coming back thanks to its enduring replayability. 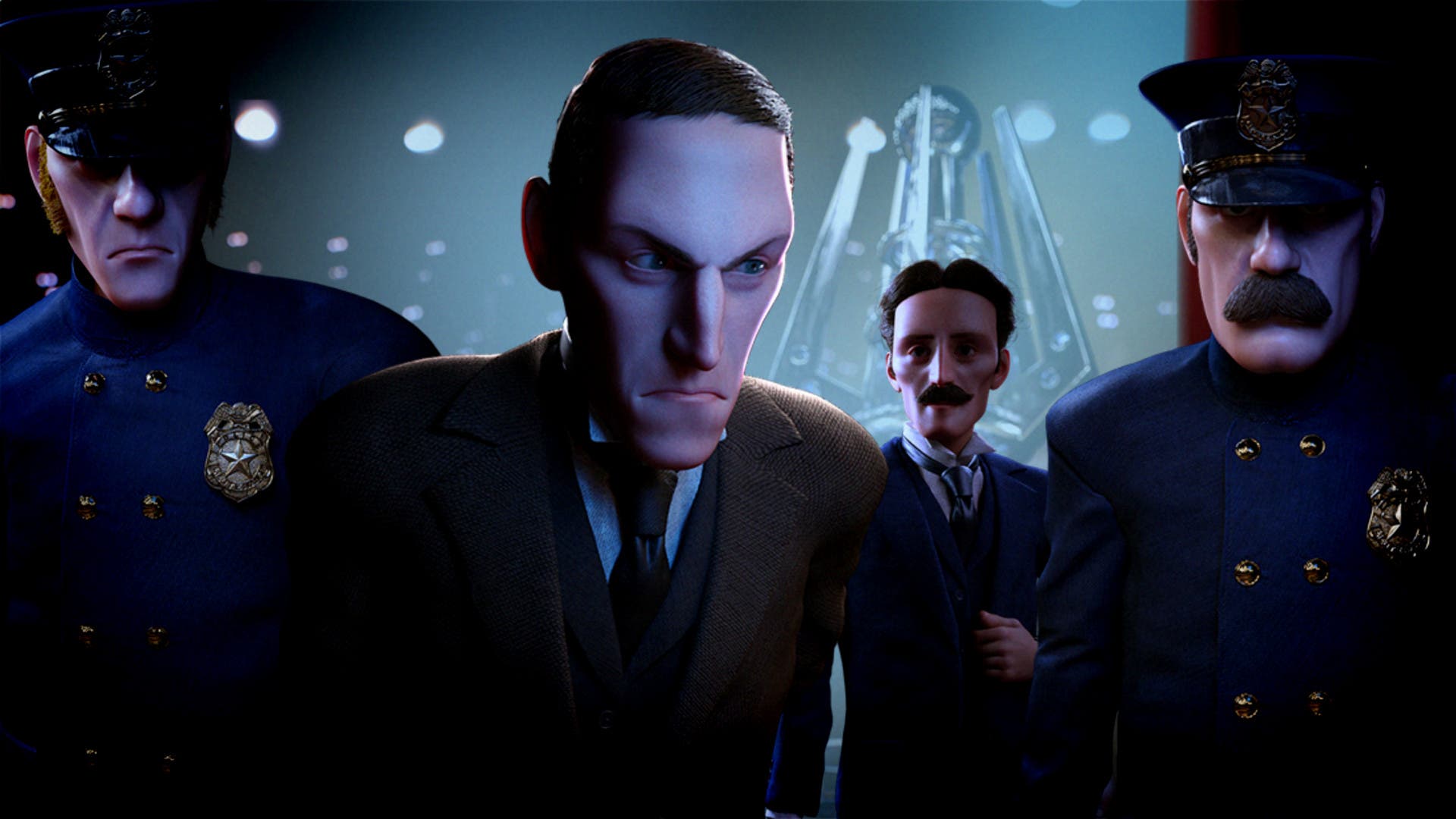 You’re introduced to the conflict between Nikola Tesla and H.P. Lovecraft, who go to war against each other, and you side with Tesla set to rid the world of Lovecraft and all his horrors. From the rockin’ main menu music, you’re pumped up. Jumping into the action places a gun in your hand and guides you through the opening levels to obtain the core weapons, perks, and gear you’ll need to survive and make your way to Lovecraft himself. Opting for a slightly tighter viewport than 10tons’ prior games, Tesla vs Lovecraft feels more confined and intimate than ever before. Though, if you don’t like you can adjust the camera height to wherever you please. The overall presentation is more colorful and saturated with great detail and plenty of eldritch blood to spill.

It’s not before long you get access to the mech. It is one of the most badass feelings as from that moment forward you drop into levels and lay waste to the eldritch creatures that spawn in. It’s limited in use, and breaks apart over a short time. Rejoice, as you can collect the parts of the mech to rebuild it and call it in when you need it. In my experience, there’s no reason not to deploy it right away, as you’re usually surrounded. The goal is to kill every enemy and wave. Along the way you’ll be collecting new weapons, and perks. Each kill earns you XP, and eventually you’ll ding to the next level and get to pick a perk. 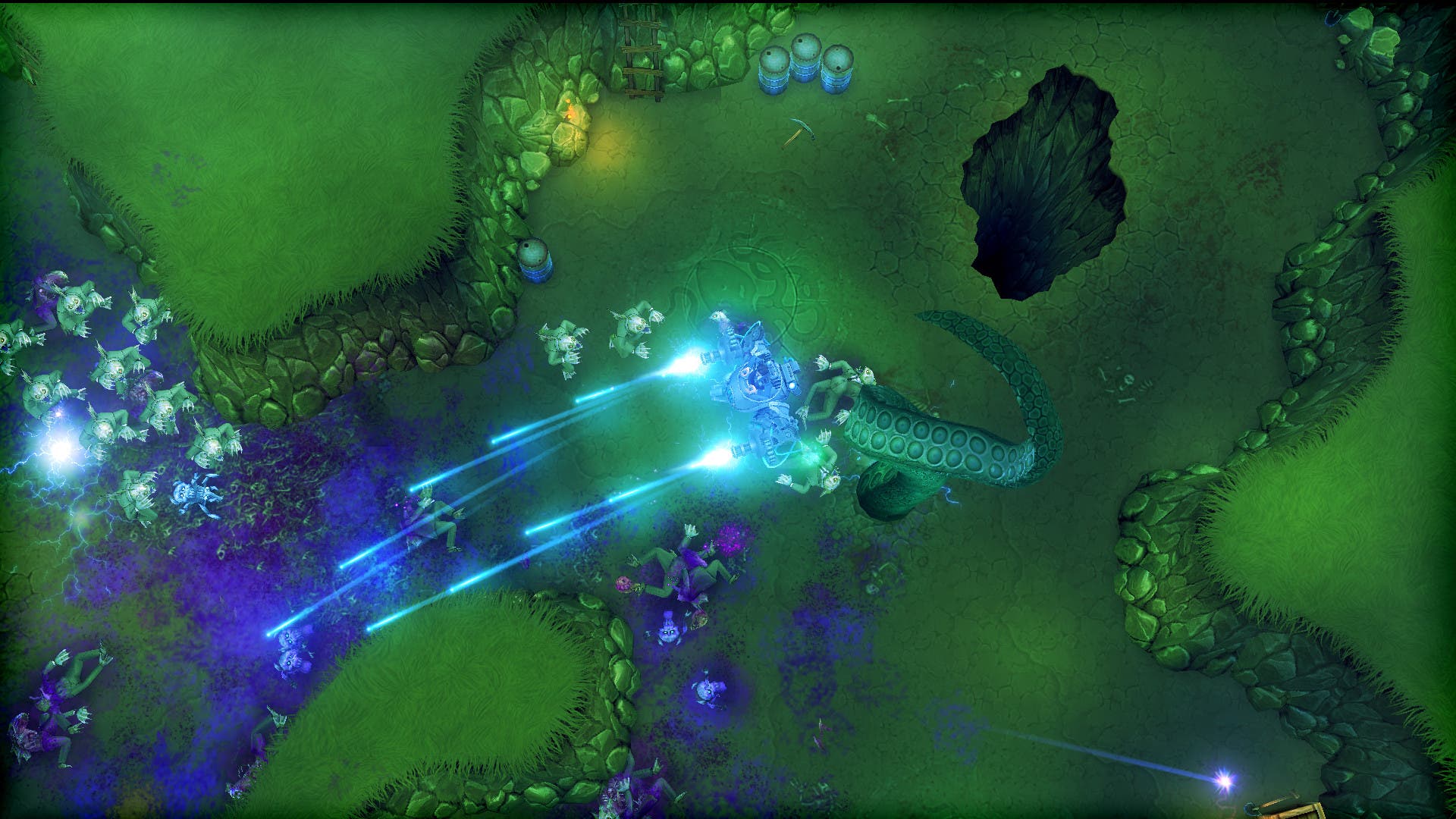 Levels take place at on a map with push pins and string showing your path. There are three planes, which serve as difficulties: Normal, Aether, and Eldritch. I’ve yet to see Eldritch for myself, but the Aether plane is much harder and has subdued colors in its palette when compared to Normal which is vibrant and colorful. The Normal plane doesn’t take long to get through, but consists of 32 levels, and all seems like a primer to get familiarity with all of the different perks and weapons. And Aether is where you start testing your skills and tactics as the game throws more enemies in an effort to get you to think and react differently to the new situations.

While it never bothered me, the levels are templates that repeat throughout the game. So you will see variations on the mansion, park, city streets, and forests. While the levels will look alike, they won’t ever repeat in layout or functionality. Some maps will have narrow paths that you can use to funnel enemies, but then some will be wide open in which you need to corral and kite them as you make your way to better weapons and abilities. 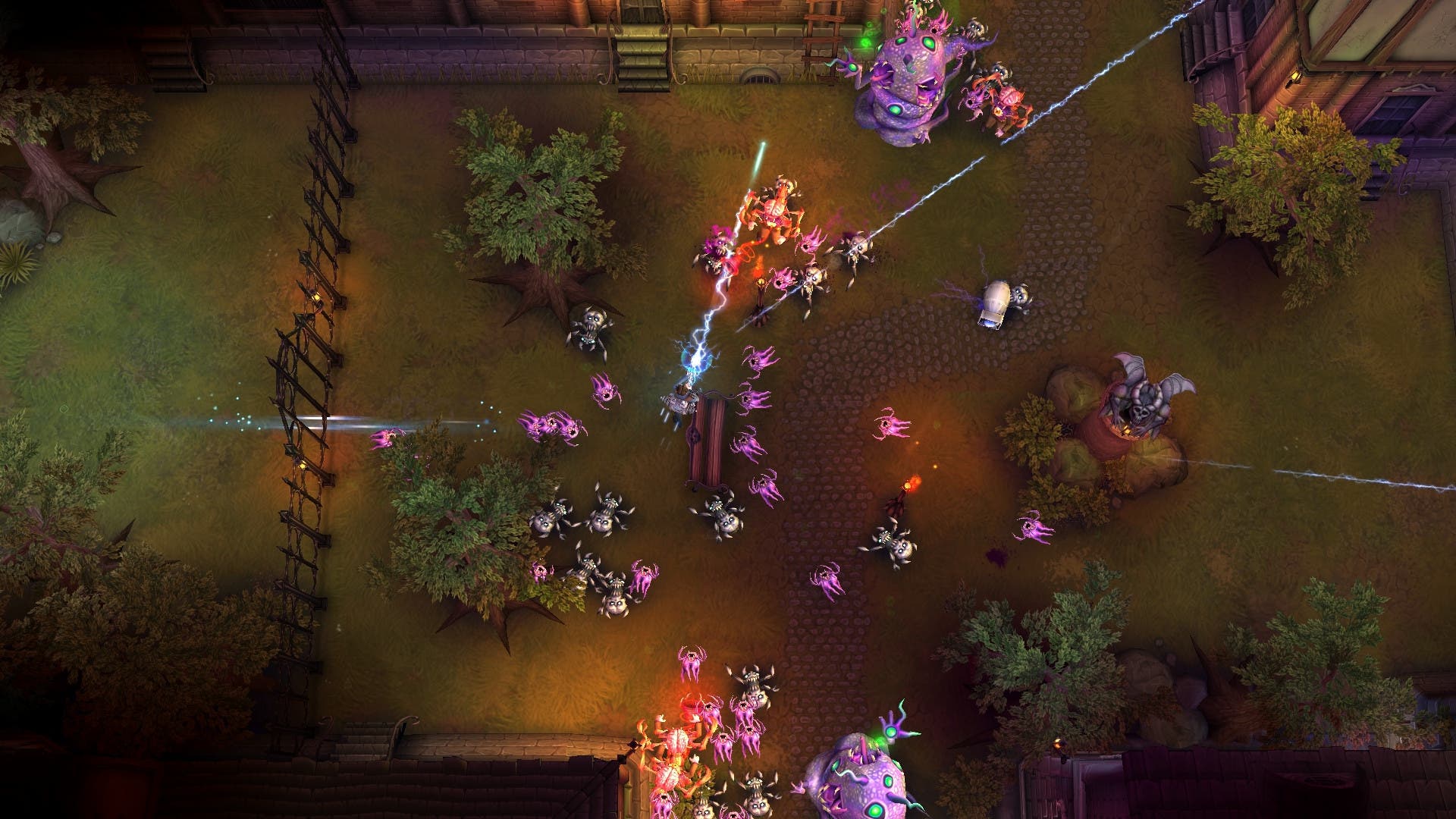 There’s a staggering twenty four perks to unlock. Having completed the game, I am still missing two or three of them. Perks are all passive upgrades to your character. There’s the faster fire rate, faster movement, extra bullet which gives +1 to shots that are fired normally, radiation radius whereby enemies that get close start to take damage from you. The catch with the perks, is that the game will always present two with every level up. So sometimes there are tough choices to make as to what you take and how you want to load yourself. I came across an EPIC perk called the Tesla Death Ray which bills itself as the last weapon you’ll have. It removes all other gun pickups and does insane damage, but with a slow fire rate despite the perks you’ve already obtained.

What’s a 10tons game without weapons? With ten weapons in total to unlock, seems shallow, but levels are designed in such a way that you don’t need more than that. Simply unlocking them does not make them available with each new level. Every time you begin a new area, it is a fresh start both in your level and starting weapon. You’ll quickly find your favorites, mine being the tommy gun and the gauss rifle. Along the way you’ll also unlock eleven abilities which range from an x-ray sword that slices enemies with massive damage to a nova pulse which causes knockback. All of the abilities have limited use, and are used for crowd control. My favorite is the “10ton weight” that you can drop to create holes and kill grouped up hordes. 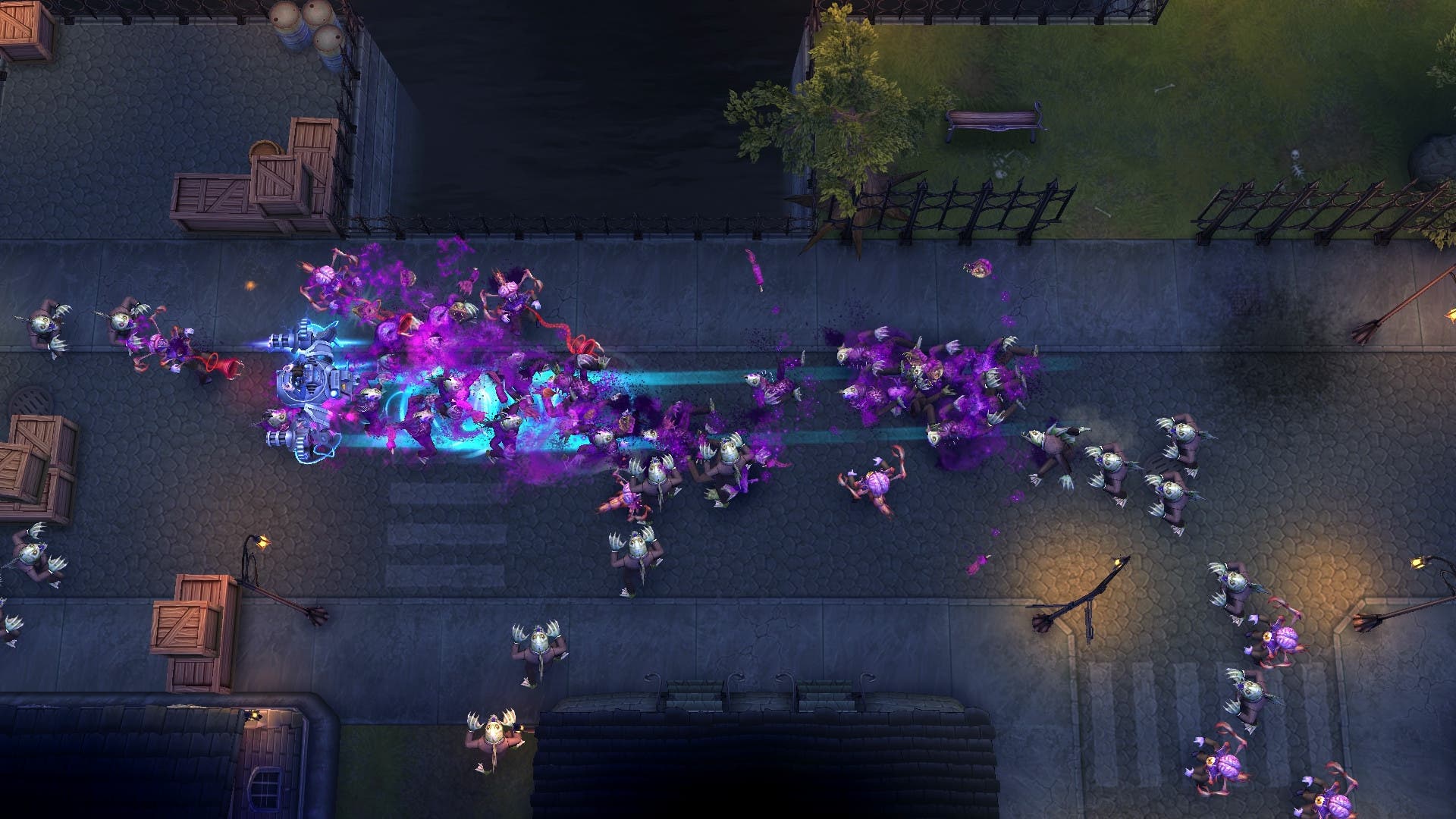 Tesla vs Lovecraft features a Monsterpedia. Not only does it display information about the enemies as you encounter them that are in the campaign, the more you kill, the more damage you do to each type. These damage outputs will increase after certain thresholds are met. Such as killing 5000 of a certain type, then you’ll upgrade to the next tier of damage, from 40% to 50% more damage. As you play levels, you can earn aether crystals by finding the crystals in levels or completing kill challenges. These crystals are currency in which you can purchase 12 upgrades with. The upgrades are either single purchase, or tiered called “inventions”.

Longevity is found in Tesla vs Lovecraft by replaying levels you’ve already beaten, playing the campaign on a higher difficulty, or by working towards completing the Daily Quests. Completing the quests laid out for you will earn you the aforementioned aether crystals used for upgrades. It seemed that the further I got in the game, and as I played higher difficulty levels, the rewards increased. Now I’m getting Daily Quests for killing 500 monsters with specific abilities or in specific ways. These yield high rewards, and coming back every 24 hours creates incentive to return to work towards getting everything upgraded. 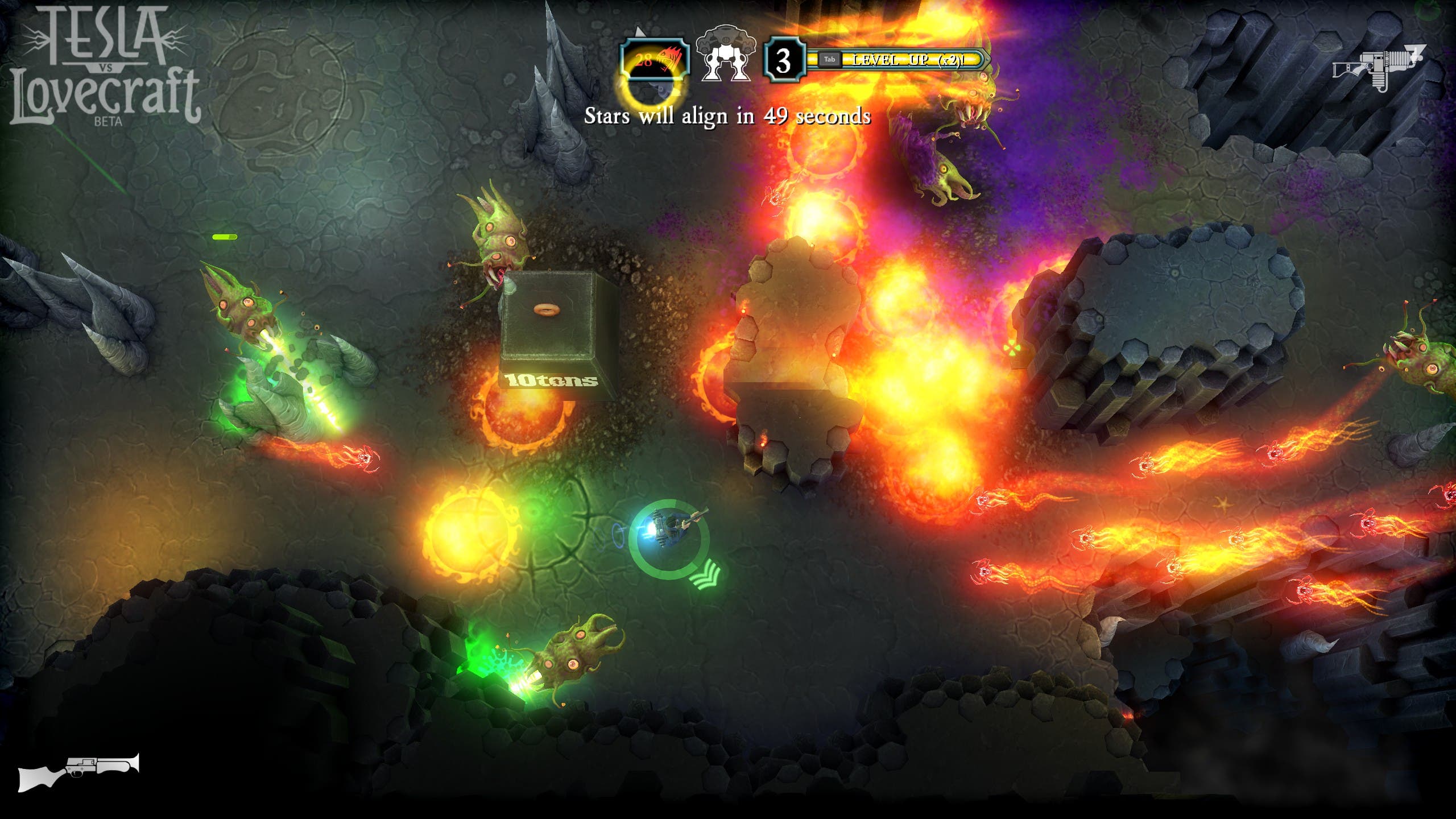 While Crimsonland is a game that holds a special place in my heart, Tesla vs Lovecraft is very much like that game but with a bigger focus on storytelling and delivering a sense of place. There are thousands of things to kill from creepy crawlers to lumbering creatures, and there’s plenty of weapons and ways to do that to spill eldritch blood. Tesla vs Lovecraft is just a fantastic hybrid of shooter and RPG that maintains its momentum all the way through. Being able decimate crowds of H.P. Lovecraft’s horrors is so damn satisfying while piloting the mech.