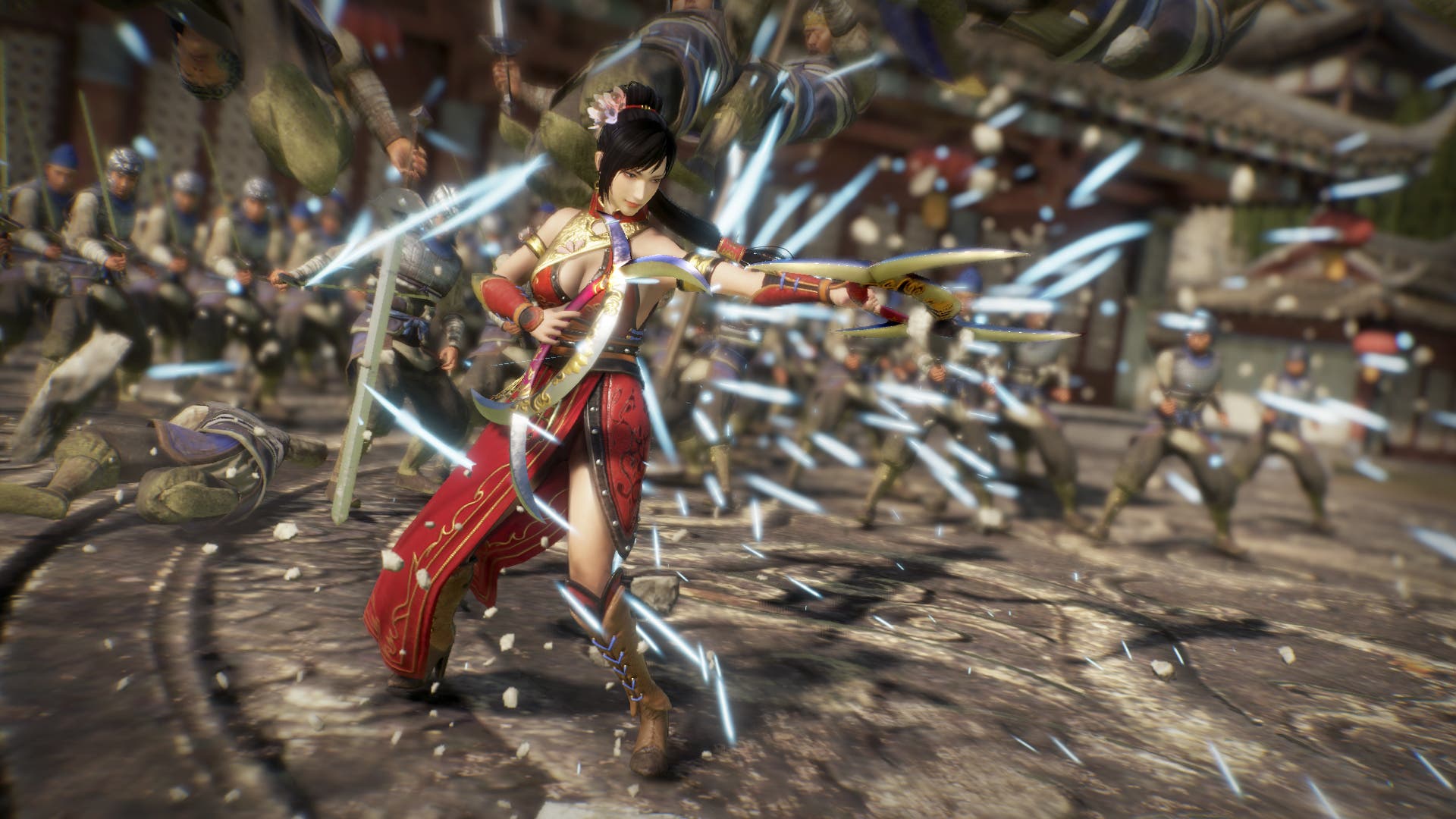 Over the years Dynasty Warriors have had a countless number of spin-offs plus each of the numbered sequels. Add in the Xtreme Legends and Empires games and you have nearly doubled the number of games that have used the same formula. In fact, lately, it seems like everything has been given the Warriors touch. From Gundam to Fire Emblem to even Zelda, the Warriors influence is spreading. Now to be fair, the last Dynasty Warriors title, Dynasty Warriors 8, was released way back in 2013 with ports to the now current gen consoles in 2014 and an Empires expansion in 2015. So its been awhile since we’ve seen the full cast from the Romance of the Three Kingdoms story together.

If you’re unfamiliar with the story behind Dynasty Warriors, it’s based loosely on the Chinese historical stories of the Han Dynasty and the Three Kingdoms period. Omega Force took these historical characters and gave them, well character. From snarky pretty boys to the lone wolf trope, with over 80+ characters pulled from the books, there is a lot in this cast. You’ll fight famous battles and get a glimpse of how the stories play out over 10 chapters. I really enjoy this series and have played with the idea of reading the books because of how much I enjoy Dynasty Warriors. But this is all ancillary to the game itself and you’re reading this review wondering why you should play this game and what makes it different than it’s 8 previous titles and 20 million spin-offs. For those past 21 years, the formula has been the same. Pick a character, choose a battle, defeat hundreds and hundreds of enemies to work your way to a named officer. That’s 20 minutes of having button mashed attack and strong attack later, you make your way to the main officer and beat them. Now I’m not going to lie, that’s this game in a nutshell too. What makes this one stand out, and gives the series a fresh coat of paint, is the inclusion of an open world.

You did read that right, Dynasty Warriors 9 is an open world game now. It’s kind of crazy if you think about it, but yet seems fitting. The series has had large maps before so going full blown open world was just the next step. Along with being open world comes the open world tropes you associate with games like Assassin’s Creed or Shadows of War; Watchtowers to reveal more of the map, quests received by NPC’s, hidden landmarks, and more. You’ll also find that, like the Farcry games, you’ll be doing hunting and fishing for items to craft weapons and armor. Yes, you can take a warrior, stand on the riverbed and fish to your heart’s content or shoot arrows at all the wildlife. I would have never thought I’d be doing that in a Dynasty Warriors game. 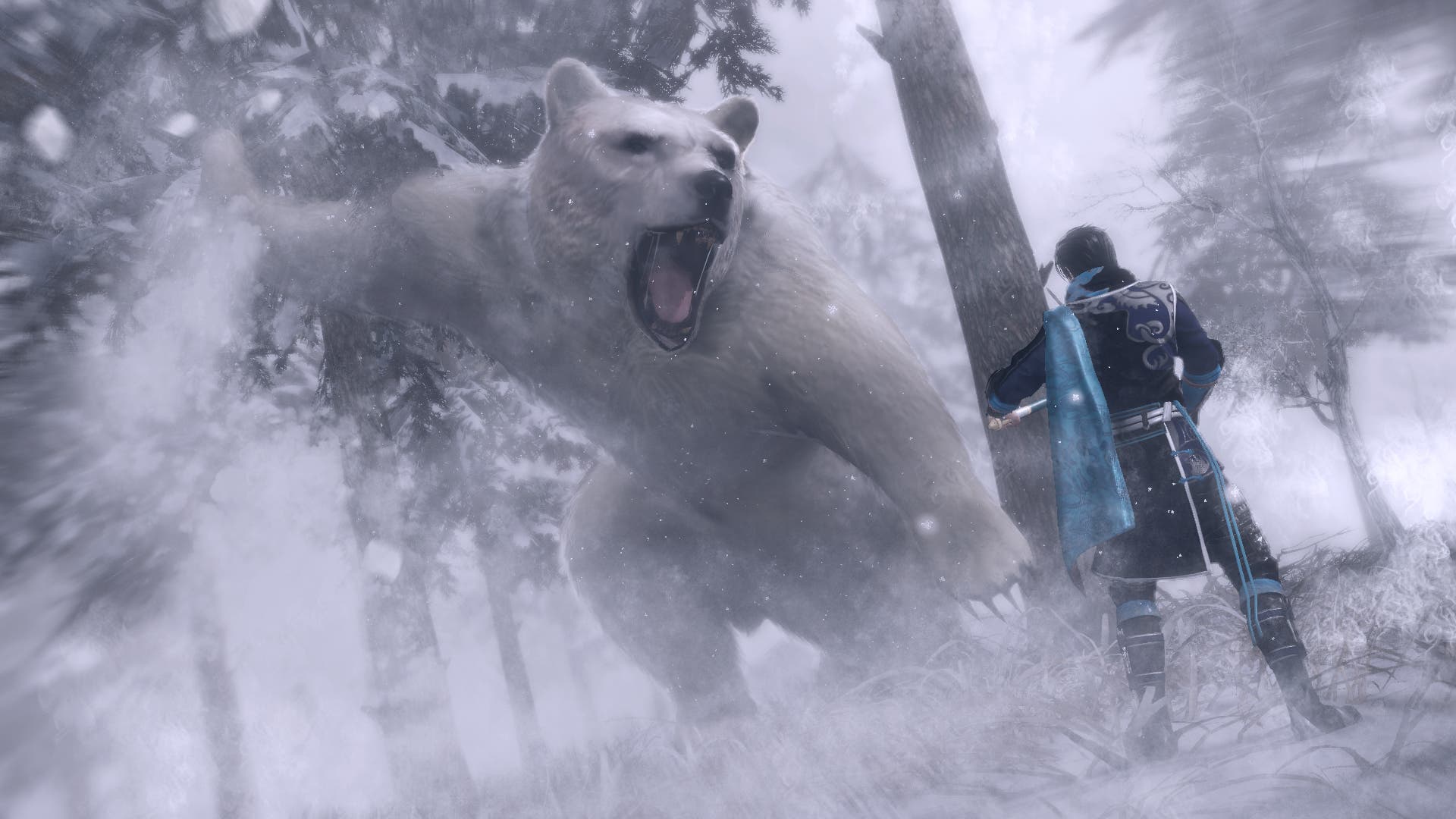 After playing these games for so long, being in the open world and traveling from mission to mission just seems perfect. This is what Dynasty Warriors needed to evolve the series. You can still do all the crafting from the past few titles in towns placed throughout the map and you may even run into other officers who might show up in more informal wear rather than their battlefield attire. Omega Force does a good job of making this open world feel lived in for sure. The aforementioned towns are bustling with people in the main streets and you’re sure to run into groups of wildlife on your way to different missions. Not only that but you may run into random battles taking place on your travels in addition to the main battles taking place. When you do you can just hop off your horse and step right in to land some of your own devastating blows. This is where the Dynasty Warriors series gets its infamous reputation from though.

The games have always been very basic on combat. Three attack buttons, regular, strong, and special (Musou). Dynasty Warriors 9 is no different in that regard, but they have added the ability to map some additional attacks to the right bumper. If you hold the right bumper down you’re presented with 4 additional moves that correspond to the face buttons. Pop an opponent into the air for some air juggling, perform a stun attack, hit them with a downward blow, and a character special move. Add in the fact that you can add elemental gems to each of these new moves and you’d be surprised how effective stringing combos of attacks together can be. I found myself doing a sequential barrage of regular attacks and finishing with a strong attack but continuing the combo with these new attacks by popping my opponent into the air and added a flurry of more attacks. Another addition comes when you can hit a critical attack on an enemy. The Y/Triangle button will appear over an officer’s head prompting you to deliver a finishing blow. As with previous games, you can customize your officer with different weapons and accessories to increase attack power and defense. Each officer does have a favorite type of weapon so matching an officer to their weapon will allow you to get the most out of their attacks. That’s not to say you couldn’t have Cao Cao use Sun Shangxiang’s deadly rings as a weapon, but he’s more effective with his sword. Throughout the game’s battles and side quests, you’ll earn money and experience that you can use to buy items and upgrade your character. When you upgrade the character you’ll be able to increase certain stats over time. The menus for this stuff can be pretty confusing at first. It does leave a negative impression seeing menus under menus. But after a few times navigating around, you shouldn’t really have much problem managing what you need to manage. This isn’t the only thing negative about the game though. Playing throughout the open world, it’s just janky. The battles seem great but the framerate everywhere else seems to be lower than 30fps on animations. I can’t verify if it is or not, but it sure feels it. If it is below, its close to 30, but they have this static-ness to them that doesn’t look good. On top of that, you’ll get stuck on geometry in the world and even more so when you’re on your horse. Rotate the camera and it turns out it was a tree or a rock or something, but it happens a lot. When going up steep inclines, the character will just slip on the steep stuff. It’s not a smooth transition either, one minute your running up and the next split second your character is sliding to a point where they can stand. It’s jarring and looks buggy to someone not expecting it. Sometimes you look at the incline and think you should be able to make it but keep slipping only to find out that if you moved two feet over you’d be fine. If you enjoy having English voices, they did include a full English cast. Unfortunately, if you’re familiar with the voice talent from earlier titles, it seems voices have been changed. The familiar deep and stern voice of Xiahou Dun is now light and young for example. I’ll get used to it but there was just something about those original voices that hit a sweet spot for me.

Another gripe I have is that there’s no multiplayer. Unless I’m missing it in a menu somewhere, but I didn’t see an option for local or online play. For me, Dynasty Warriors has always been a co-op experience. Sitting down with a partner and completing battles together was a big draw for me growing up with the series. To find it’s lack of inclusion here is disheartening. I can understand if it was removed for technical limitations or to focus on the core gameplay, but it still stings a little when the gameplay lends itself perfectly to play with a friend. Even with my issues, I love this game. I wish it would be more polished than it is, and I wish the voices were what I remember, but I’m still having a lot of fun with it. The combat is engaging enough, the story is still quite good, and the open world lets you explore and just do whatever you want in. Will this actually entice new players into the series? I don’t think it’s got enough there to change the stigma surrounding Warriors games but for existing fans this one not to miss.