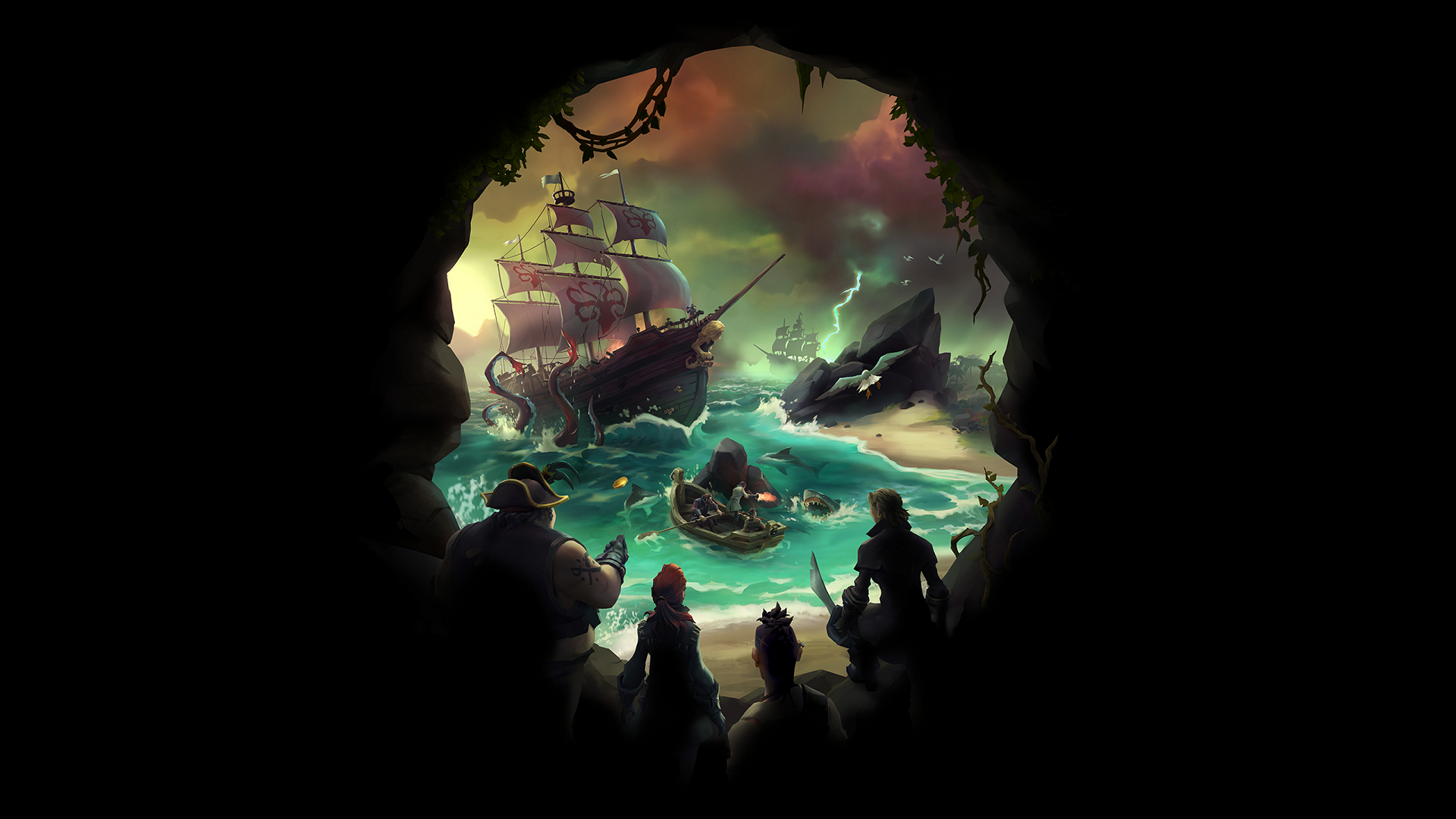 Sea of Thieves is the pirate game I’ve always wanted. It doesn’t deliver in all the ways I would have expected, but it makes me feel like the world is my oyster. Rare nails the look, sound, and feel of being a pirate with Sea of Thieves. Where it falters though, is giving you the information necessary to get started. Once you get everything figured out though, Sea of Thieves is at its most fun with friends. Whether sailing with a full crew or solo, Sea of Thieves gets its hooks into you rather quickly. After a relatively minimal character creator, you’re placed onto an island with no tutorial, text, or conversation to get you going. After looking around a bit, you’ll see a ship at dock (that one’s yours). Once you hop aboard, you intuitively learn what must be done: raise the anchor, angle the sails, lower the sails, and start steering to somewhere. This is the explorer’s approach to Sea of Thieves, letting the wind take you wherever it may lead.

The pirate’s approach is by starting a voyage. Voyages at first don’t cost anything, but as you become more reputable either solo or in coop, it begins to cost you hard-earned coins. How you earn those coins is following the voyages. There are three different factions, each with different type of missions to take on. Traditionally, you will be given a map, and you set sail to the location, dig it up, and bring back to an outpost to sell to complete the voyage. Other factions will start you off by ferrying chickens from an island back to an outpost, very specific chickens down to the color of their feathers – sometimes its snakes though. Or perhaps the coolest, is to collect skulls for the mystical Order of Skulls. The best part, is that you can do all three, Sea of Thieves lets you play how you want. Playing Sea of Thieves can be done with a crew or solo. A crew can be just two of you on a sloop. You can also sail a galleon which supports four players. You and your crew will be responsible for: raise/lowering sails, adjusting sail angle, lookout for ships, drop/raise anchor, help navigate captain, repair ship with planks, dump water to avoid sinking, refill cannons, fire cannons, etc. Making sure that everyone has an assigned duty, at least verbally, is the best way to maintain efficiency.

Ultimately you want to earn the most money in Sea of Thieves, as there’s tons of customization options to buy. The best thing is that all of the gear is just cosmetic, to include the guns. You can even outfit your ship with specific colors and sails to really stand out from the rest. Sea of Thieves is not a game about having the best gear, but knowing how to use the gear and tools through your time playing the game. For instance, there’s systems in play that the developers didn’t think of, like hiding chests on top of masts and rotating them while parked to make it hard for marauders to steal them. 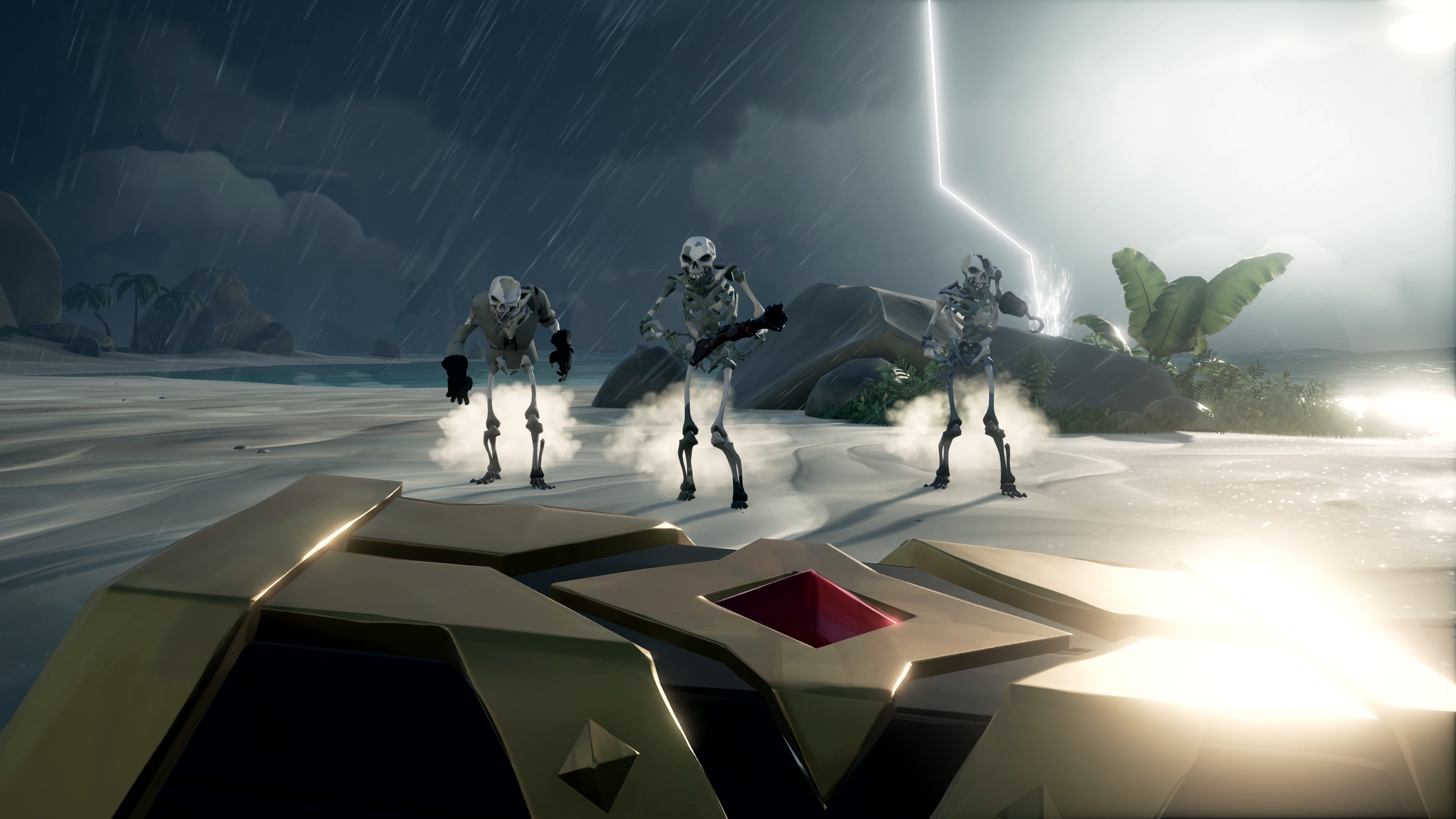 Sea of Thieves doesn’t do a good job at telling you a lot of things. Perhaps the most egregious assumption, is that you already know that you can become a Legendary Pirate. It also doesn’t how. How you achieve that is by ranking up, and then you’ll be given access to the Legendary Outpost, where you take on legendary voyages for even bigger riches. These are lengthy and complex, but at the same risk of encountering others who will take everything you worked so hard for. Sea of Thieves is good at making you never feel safe.

Death comes quick, and often. Sea of Thieves is full of risk vs reward. Exploring sunken shipwrecks means you’re in danger of being eaten by sharks. If you see a skull cloud, that means underneath it is a skull fort which has a ton of loot but guarded by waves of enemies and a boss before you’re able to access it. However, death isn’t the end, you’ll respawn on a nearby island and can begin anew. Any voyage or fort progress is lost, but you don’t lose anything in the process. Where Sea of Thieves has some missteps, it’s best when it gets out of your way and lets you make your own fun. It’s amusing that when you have been destroyed by an opposing crew, that you then pull out your instruments to play songs as the ship sinks. Or by loading yourself into your ship’s cannon and launching yourself onto an enemy’s ship to shoot their explosive barrels to essentially sink themselves. Or maybe when you’re being pursued, and drop anchor to swing your ship around just right to land the killing blow. Sea of Thieves allows you to be clever, and let the emergent moments tell the tales that no dead man would be able to. It’s worth noting that the cross-play of Sea of Thieves being “Play Anywhere” is excellent, letting players on Xbox One and Windows 10 play together seamlessly. It’s really great to include a larger pool of people to play with. The game plays well enough that there’s no advantage or disadvantage of being console vs PC.

Sea of Thieves is what pirate dreams are made of. It’s got some holes that need plugging, and I think time will be it’s biggest benefit – there’s plenty of hours of entertainment to be had with the existing voyages and things to see and do, but I’m incredibly excited to see how the game evolves from here. Sea of Thieves relies a lot on playing with friends and some repetition to get to legendary status. This is an incredibly social game, both verbal and non-verbal, that you’ll undoubtedly have fun playing for hours upon hours singing sea shanties while drinking grog and firing off cannon shots for no good reason.