If you didn’t think you’d hear the words BATTLETECH or MechWarrior in 2018, or 3018 for that matter, rejoice. Harebrained Schemes and original BATTLETECH creator, Jordan Weisman have made a tabletop experience on PC. MechWarrior is known for being a shooter series, and BATTLETECH is thought of as a tactical game. Each embrace the space opera in different ways, but BATTLETECH‘s return sees events unfold with exciting twists and turns. BATTLETECH sits well in the house of Paradox, and cements its place as being the premier tactical series that’s been long overdue for a revival. 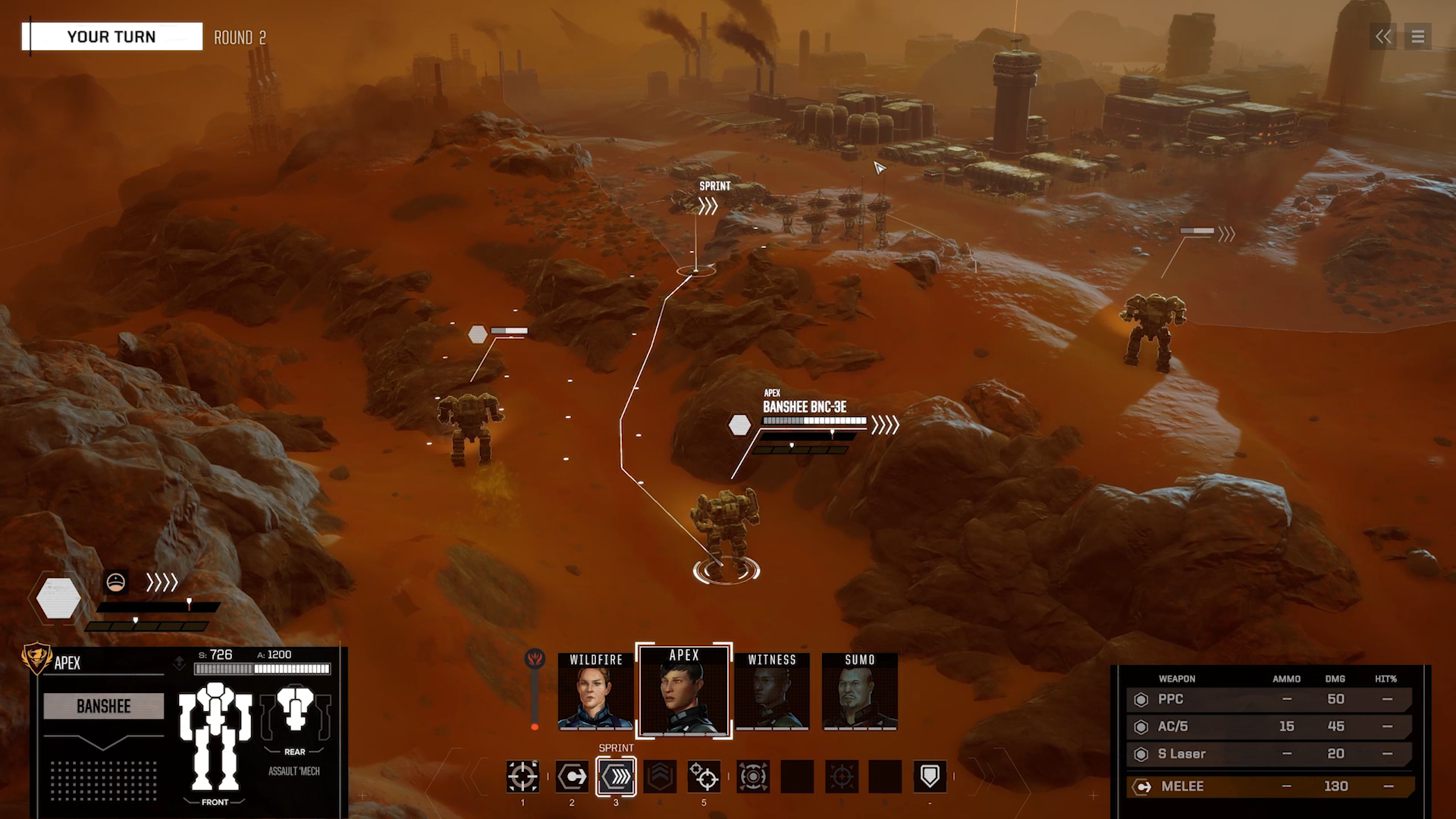 The opening to BATTLETECH serves as a brief history and albeit a crash course of the rapid expansion that occurs in the franchise. War begets peace begets war. Taking place in the year 3025, this is rather early in the BATTLETECH timeline that makes it accessible for newcomers to get into without feeling like they’ve missed too much. Character creation sets the stage for the level of personality-driven things will be, and you can even choose the pronoun to be addressed: he, she, or they. The background you choose for yourself affects stats and story moments, your initial color and company dictated by these choice. But you can make changes at anytime afterwards. Once that’s been set, you’ll be dropped into the cockpit of a Blackjack and set off in your adventure. After the rather surprising opening, you’ll be placed onto a ship with a crew as their commander. It happens rather

BATTLETECH‘s campaign is structured with story and side missions. The story is told at a steady pace with priority missions being missions that carry things forward, but can be taken on at any time. Whereas the side missions are contracts give you the most freedom. You can take on as many or as little as you want. Contracts do not regenerate, so you won’t get new ones if you decide not to take on the ones you’re currently offered. Contracts also balance money and salvage. At the end of a successful mission, you’ll get to pick up salvage to build a new mech or gather weapons for your existing. There are sliders that determine how much money vs salvage you get. There’s no negative here, but opting for less money increases your reputation. You’ll notice at any point that BATTLETECH does not have a difficulty select, the difficulty is dictated by the number of skulls (out of five) each mission, both story and side have available. Since you’re a mercenary outfit, retreat is a viable tactic as you don’t have to win every mission. This will have repercussions on your reputation, but if it means not going bankrupt then it is worth it. 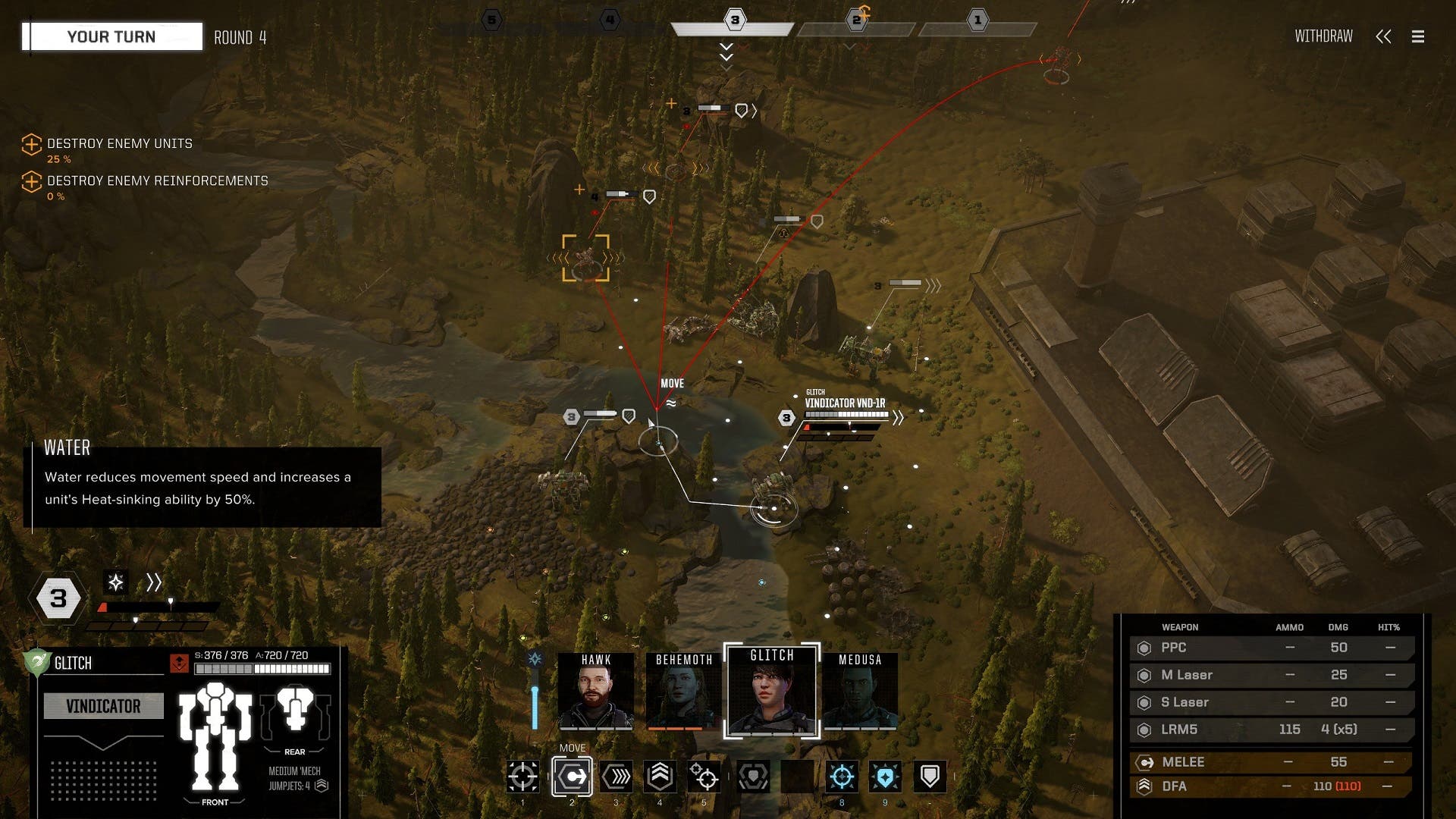 BATTLETECH‘s combat is executed with turn-based tactics and extreme tension. No matter how big and bulky these mechs get, fragility is ever-present. Comparisons to how you play will be made to that of XCOM, and even the recently released Into the Breach. While this carries true for the most part, it very much does its own thing to standout from these comparisons. As you make your moves, the enemy will as well. In missions where there are allies, they too will make moves – such as turrets. You truly feel the tension of these long battles as the back and forth leaves uncertainty as to who will actually win. Parts get blown off, mechs become unstable and fall over, and overheating causes structural damage. You can negate heating problems by getting into bodies of water. Also, there are times where firing every weapon isn’t necessary, so being able to pick and choose which weapons will fire on a turn can save you from unnecessary damage. These tactical considerations lend BATTLETECH to being such a close facsimile to its tabletop counterpart.

Evasion is a key factor in BATTLETECH. You earn evasion points by moving a lot during your turns before firing. You lose evasion points by being shot at, this is true for the other team as well. Using abilities like sensor lock can tag enemies as they move out of sight or back into the fog of war. It is wholly satisfying to know that melee is viable when you’re too close to fire certain weapons due to their minimum effective range. This can knock a mech onto its back, or create stability issues for other mechs to take advantage of. Like tanks, Mechs have weak armor in the back for the most damage. Other times, it is important to disarm the strong mechs more than outright killing them. Other special abilities like precision fire lets you manually aim towards a specific part, and as you call your shot, you’ll do specific damage that uses up morale. Morale an overarching mechanic, used in and out of combat. Out of combat, it factors in how you heal and repair your people and units. In combat, it determines you being able to use special abilities like the aforementioned precision shot. The interplay between all of the systems feels cohesive.

Each mission takes place on different types of biomes: desert, arctic, jungles, and more. These hand-crafted maps offer different ways to use the environments to your advantage. Buildings and trees are temporary cover and can absorb all or some of the shots fired. You can even take partial cover in rubble. Line of sight is important, so hiding a mech for a few turns is a strategic element that all commanders should use. All the different types of terrain can be used to your advantage, such as using the high ground as it offers the highest probability of landing shots and securing headshot damage for easy kills. Kiting enemies, and making them come to you and your carefully positioned mechs also are advantageous.

Your lance, or squad have XP, and in the barracks you can focus their skills in one four branches: gunnery, piloting, guts, and tactics. This allows for a variety of combat tactics to be employed on the battlefield. Each mission has primary objectives, and optional objectives. Completing the optional ones not only net extra experience, but a bonus to your payout you wouldn’t otherwise receive. Money is so crucial early on, that you’ll want to earn as much as you can make.

As the story unfolds, you’ll be given command of the Leopard, a ship with limited space and crew to operate on a high level. BATTLETECH does an excellent job at introducing things to you at a steady pace. Conversely, BATTLETECH demands a lot out of you in the first few hours, and things appear to be a struggle as finances are always in dire straits. To some, the idea of “save scumming” is cowardice at its core. For me, it was the means of survival. It’s game over if you go bankrupt. It’s important to make sure you keep everyone alive, and better yet avoid them being sidelined, as well as keeping mech damage at a minimum so you can stay afloat. C-Bills are the form of currency, and you’ll be using this money to pay your crew, pay for repairs, buy new weapons, and more. Running this outfit is like that of operating a business. The managerial aspects are intriguing, demanding, and wholly satisfying once you get into the groove.

Several hours into the game, after you’ve completed certain story missions, you get access to the Argo. What it is, is less important as what it does for you. The struggles you’ve fought so hard for, become lessened. Hard work pays off, and you are rewarded. The correlation between your fight to keep money flowing in and not out mirrors that of the story in fantastic ways. The relationship you have with the crew and all the parts that make BATTLETECH up is intimate. The new ship adds new possibilities, such as upgrades, more storage, and creating depth on the bench so that you’re not always relying on the same crew if something were to happen. BATTLETECH encourages you talk to your crewmates, as not only will they teach you things, but allow you to establish relationships. There are also events that occur that you have to resolve through dialogue options. You are able to control the timeline of what tasks get completed in what order. BATTLETECH gives you more control than you’re used to, but it’s incredibly welcome. 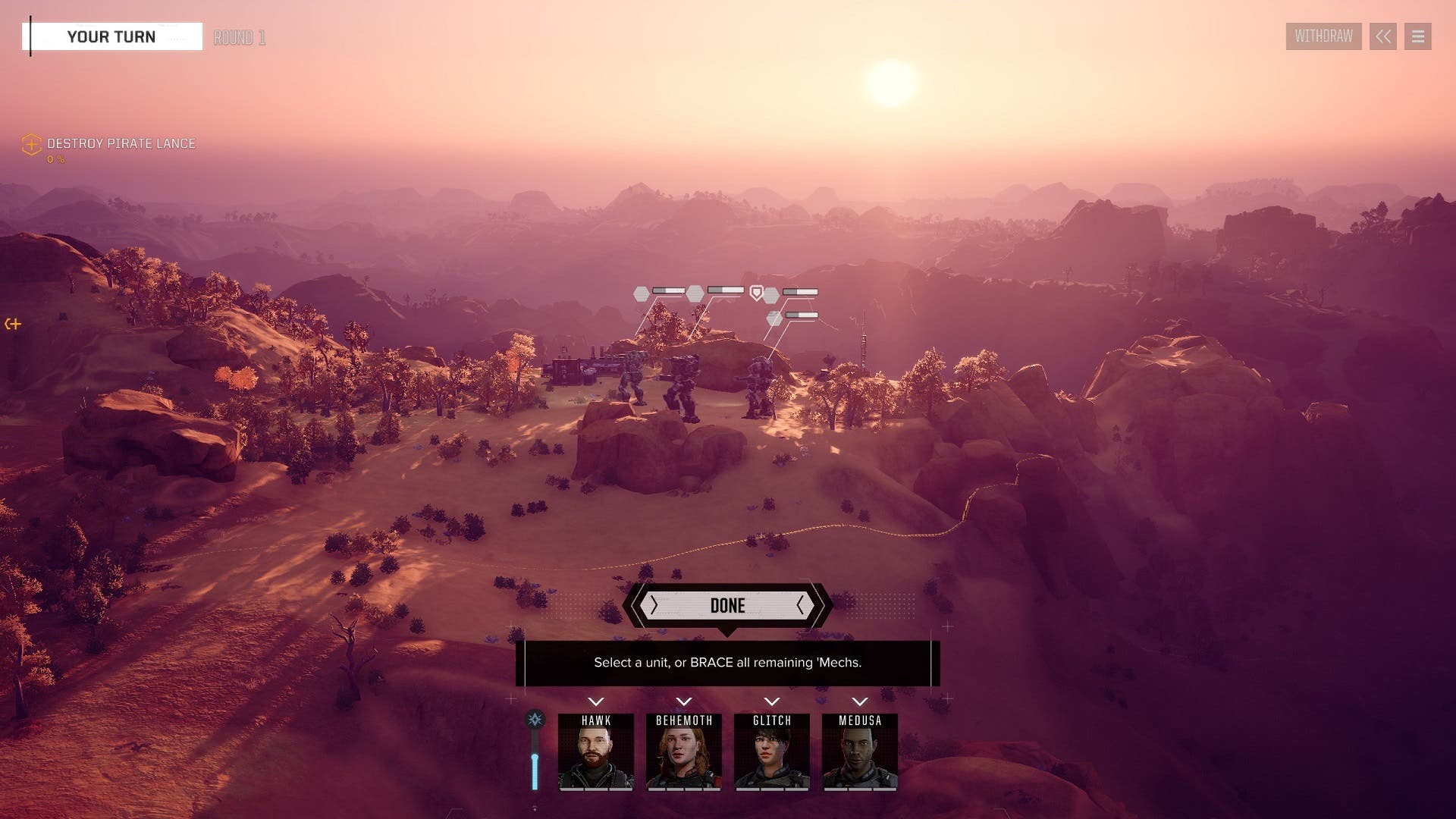 BATTLETECH is a massive game. There are several dozens of hours in the campaign to enjoy, and when the main story is complete, you’re able to continue and work the Inner Sphere to increase your reputation and expand your ragtag group of MechWarriors. Skirmish mode helps extend your gametime against AI, or against a friend. Harebrained Schemes ushers in a new style of tactical combat for all skill level of players to enjoy. It is as rewarding as it is deep. BATTLETECH is complex, immersive, and most of all, a tactician’s dream.