SOUTH BEND, IN (June 8, 2018) – Viotek, a brand at the forefront of performance and value in gaming peripherals and other consumer electronics, announces its monitors are optimized to support Microsoft Xbox’s recently upgraded 120hz and Adaptive Sync capabilities.

By supporting a 120hz refresh rate and Adaptive Sync (Microsoft’s take on AMD FreeSync), Xbox One S and Xbox One X now allow gamers to experience smoother gameplay in terms of performance and responsiveness, and without tearing or ghosting—image abnormalities that occur when the refresh rate and frame rate are out of sync. But to enjoy those updates, gamers need a compatible display, which is where most televisions fall short.

“Viotek offers gamers the ability to get more out of their Xbox consoles than what most TVs allow,” says Vice President Brett Barbour. “These updates from Microsoft break down a barrier that’s existed between PC and console gaming. Consoles have been somewhat static, but this opens them up to the more core enthusiast market that has largely been relegated to PC gaming, and Viotek is the perfect match.”

Until recently, gaming consoles were typically limited to a 60hz refresh rate, putting them at a considerable disadvantage to the performance PC systems are capable of.

Worth noting is that since Xbox uses HDMI output, resolution will be reduced to 1080p (from 1440p) while operating at 120hz due to the inherent bandwidth of the interface. And unlike TVs, not all gaming monitors include built-in speakers. 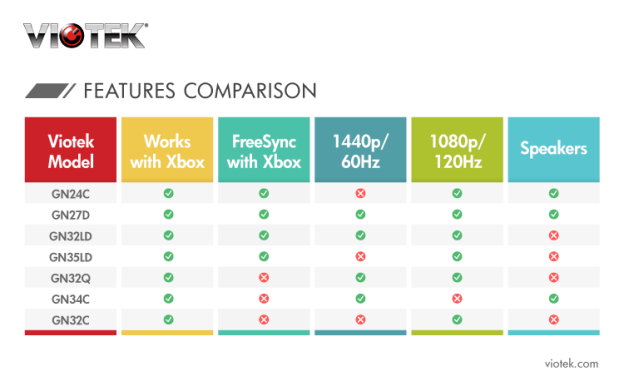 “We’re only going to continue to see the playing field level out between PC and console gaming, and Viotek is committed to offering the most immersive experience for gamers regardless of platform,” says Barbour.