Shadow of the Tomb Raider Review

Tomb Raider has advanced since its reboot in 2013, and we’ve seen a tougher, and grittier Lara Croft as a result. Deus Ex developer, Eidos-Montreal takes over for this important, and crucial entry. With Eidos-Montreal at the helm, Shadow of the Tomb Raider is nothing short of amazing. As each hour passes, the gameplay and systems work well together to provide a cohesive experience. The entire game is a thrill ride from open to close. While this is the end of Lara’s origin story arc, what’s been occurring during this trilogy is something that will empower her for entries to come. Shadow of the Tomb Raider is a refinement of prior games, now perfected. 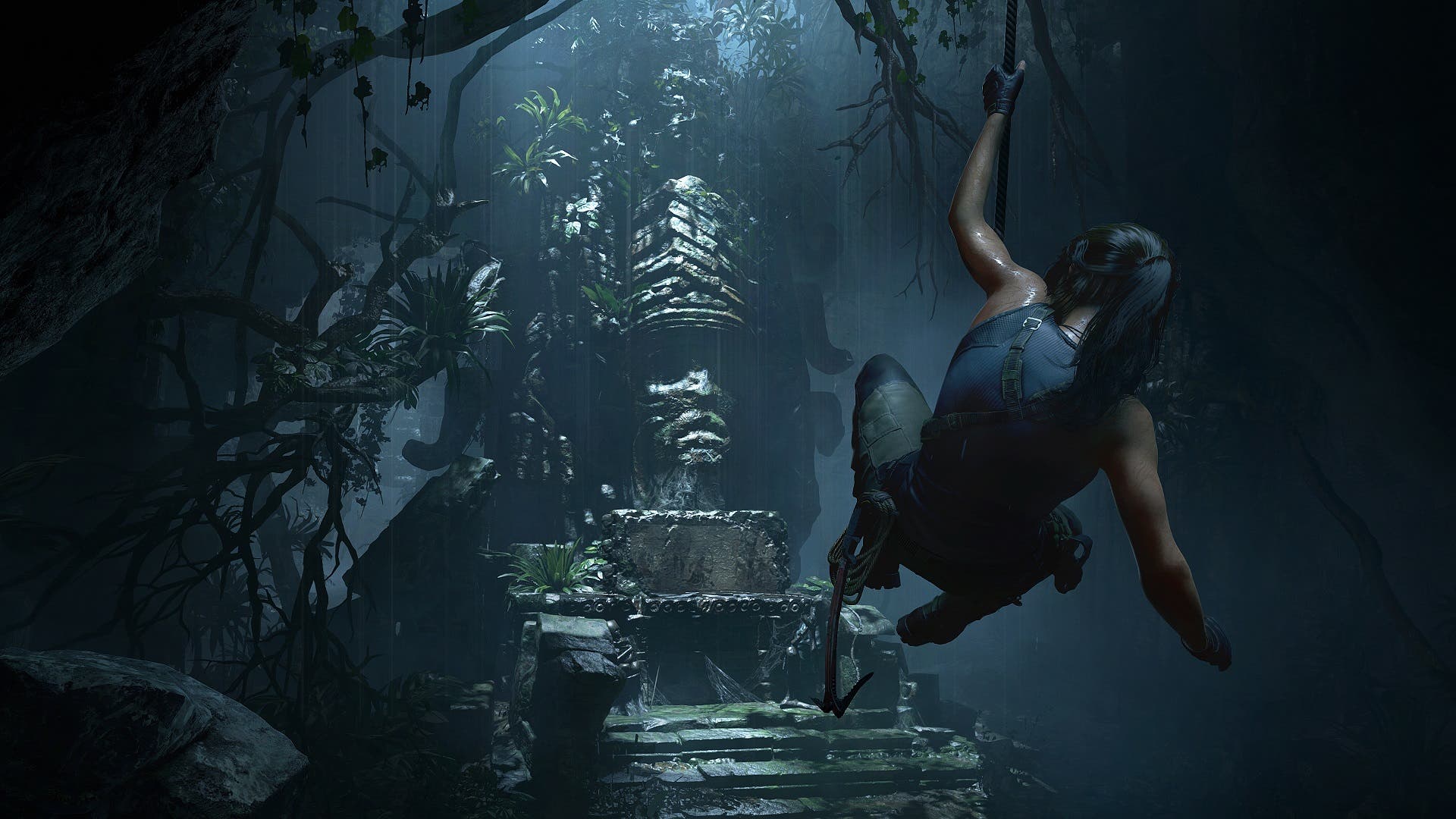 Shadow of the Tomb Raider hits the ground running starting off in the middle of an intense sequence with no context, and is a gripping opener. And things don’t really settle from there, while the pace eventually slows down, the stakes could not be higher. Lara Croft and Jonah first start in Mexico and are tailing a man known as Doctor Dominguez, with the help of Trinity, the military organization hell bent on destroying history and being a thorn in Lara’s side. As the events unfold with a Mayan artifact, Lara becomes wrapped up in quite literally saving the world in what is the most fascinating and intriguing stories for the series yet. We also see that Lara and Jonahs’ relationship is under a bit of strain, seeing her become too focused on the treasure, the hunt, and befalling Trinity. In a bit of role reversal, Jonah often serves as the “damsel in distress” along the way. While she is still in her early 20s, this means she’s susceptible to becoming arrogant and blind to the things that should mean the most to her. This is a recurring theme throughout the game, and as she establishes new relationships with memorable characters and places, becomes an important piece to her life puzzle.

Shadow of the Tomb Raider continues its refinements in many ways. The first of which is the difficulty. No longer just a simple selection of difficulties, you can now fine tune your difficulty for combat, exploration, and puzzles. Now, for exploration and puzzles, this is mostly a visual change, but in combat, enemies are tougher physically and mentally, changing how they encounter Lara. The game also has a minimal UI, which helps with immersion and utilizes the world to tell you what it needs. For instance, tips for movement will be written on the walls or on a surface rather than an obfuscating tooltip pop-up. Finally, there’s a “frame” option, which is good for streamers, as well as completionists who want to track collectibles. It doesn’t take up too much real estate, and honestly looks great. This option is best after completing the main game. A returning divisive system is Survival Instincts, which allows Lara to see her surroundings and highlight important objects. This system is expanded to include more variations for the additions to the gameplay and be more or less informative to the player, based on their difficulty selection.

While not much can be said about the story without spoiling it, there’s nods to trilogies all throughout the game. Lara will make discoveries and have revelations about her past, and event some events from prior games will surface here. This provides her closure in the things she’s dealt with, allowing for the series to move forward after this entry. There’s a sequence that is a flashback, that provides one of my favorite parts from the game. It’s something I would play a whole game of. Again, in trying not to spoil anything, but to express what makes this game so good, is how emotions can make Lara go from doing the necessary to going on a rampage that even Rambo would be impressed of. Shadow of the Tomb Raider has so many incredible moments that are so close to one another, it’ll be hard to find a singular moment you enjoyed the most.

Shadow of the Tomb Raider continues the trend of being Metroidesque in that you will start with all of your gear, and quickly lose it all early into the game. Over the course of the game you’ll get all of these things back, but that means you’ll be playing most of the game on minimal resources, and be scratching and clawing through every fight. So your bow and arrow, and the ability to craft anything else you need become of a higher importance. Lara can now craft new outfits, healing and endurance items from plants, and even poison and fire arrows from collected items in the world. 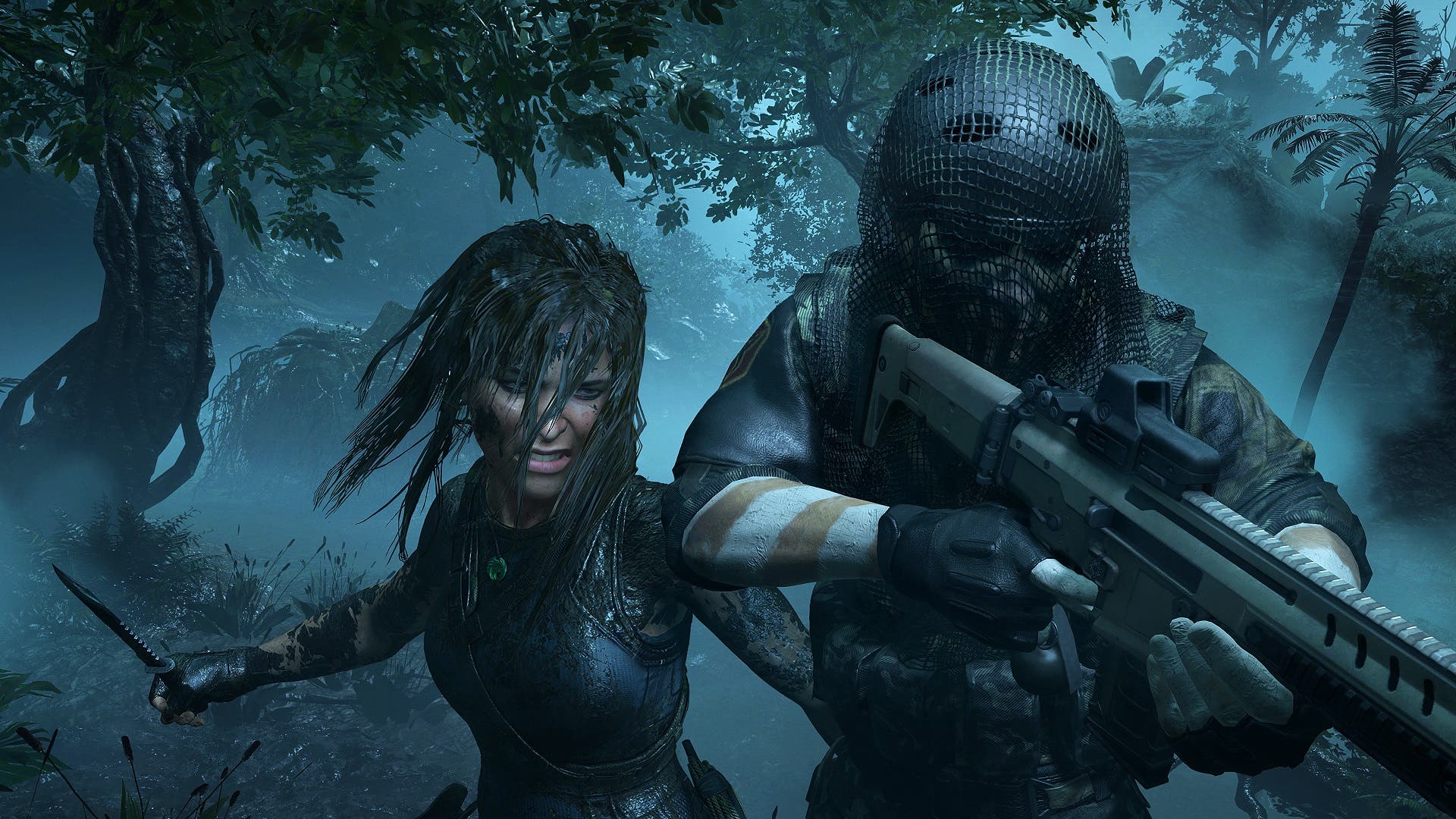 As this is a game from Eidos-Montreal, there’s now a focus on stealth and being hidden. As such, the game as a whole is far less combat oriented, which I found to be a problem during Rise of the Tomb Raider. Survival has been the backbone to Lara Croft’s origin story as the tomb raider. The stealth sections are punctuated by Lara’s new ability to find mud and camouflage herself into the environment. She becomes less visible to enemies, and can blend in when face to face with an enemy, and can take them down quietly with lethal brutality from her climbing axes. Survival instincts plays another role here, as yellow highlighted enemies signify that they are not being observed by a different enemy, whereas red means they are being watched and they will detect you if they are killed. If you break stealth, it is entirely possible to enter it again. However, if you choose to be anything less than stealth, there are guns that become at your disposal that you can use with great impunity.

When not stalking in the shadows or participating in incredible action pieces, there are hub areas for Lara to be out of combat and relax. These hub areas are fully fleshed out, to include towns actually populated by people with things to do and places to be. You can talk with townsfolk, shop, or find hidden secrets in these areas, free of most danger. These towns which serve as hubs feel more lived in than ever before. If you were to go back to the prior games, you’d realize how barren and lifeless things were now. Now, Shadow of the Tomb Raider feels vibrant and you feel connected to the people in a real way, as there are optional missions to take on from these people. 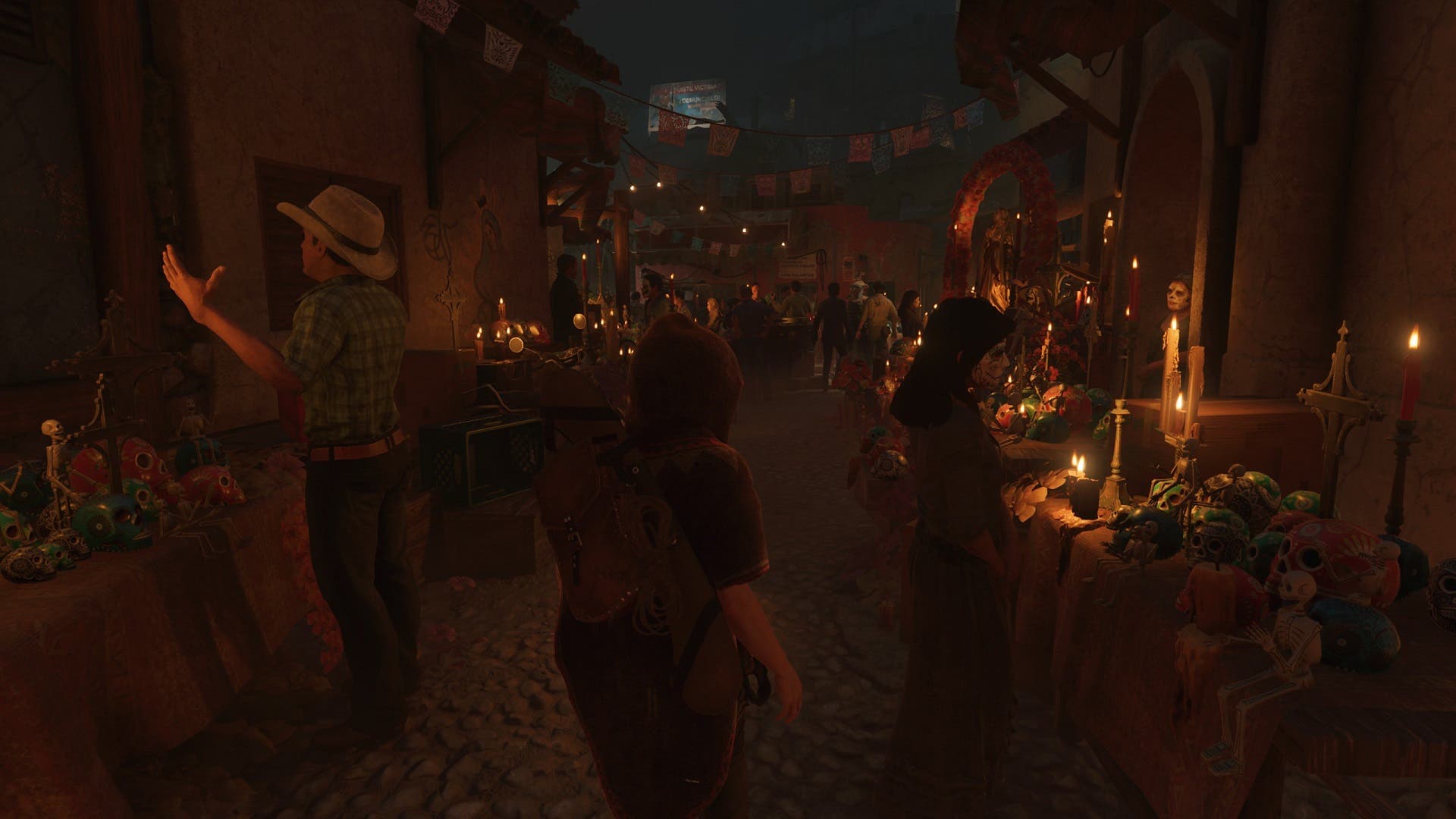 From the story tombs to the optional and incredible tombs, there’s an increased danger to every one you complete. The quality of crypts are as good if not better than the story tombs. The puzzles and overall design are incredibly detailed, and it’s great to slow down and take your time in them. Lara will also find murals and monoliths, which she can read and continue to learn the language, to extract experience points from them.

At campfires, you’ll be able to spend your experience in the form of skill points on a new, color-coded skill tree. I can’t say I preferred this presentation, as it was harder to read from a coloring standpoint. Seeker skills focus on exploration and observation, Warrior skills are combat oriented for weapons, and finally Scavenger skills increase crafting and stealth. These skills are different than prior games, but rely on similar concepts. I feel only the presentation is muddy, but the actual skills you can invest in are incredibly helpful. 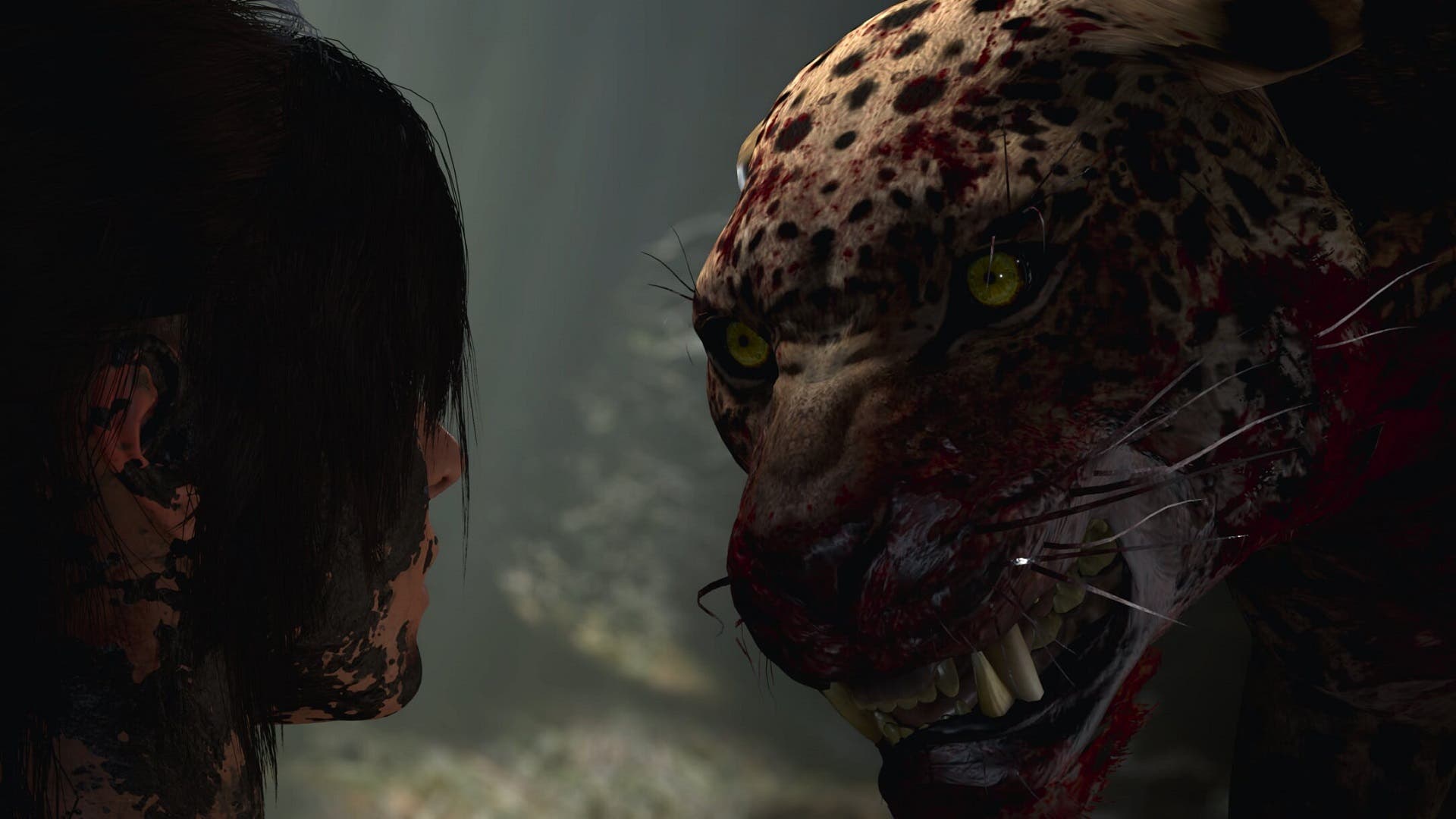 While there are less deadly animal encounters in Shadow of the Tomb Raider, when they do happen, and they are memorable and impactful. For instance, an early sequence has you fighting with two jaguars who have a taste for human blood. Killing certain animals will let you craft new outfits from their hides. Other times though, it’s eels and piranhas who also have a taste for blood, and require some underwater stealth to avoid. It’s a totally unnecessary but amazing system. Being underwater is incredibly tense and claustrophobic, not just from the occasional predator, but you’ll go long stretches before finding air pockets along the way, and I never failed a section due to drowning, but these underwater sections in particular, are a highlight in Shadow of the Tomb Raider.

Gone are the weird modes and card systems of Rise of the Tomb Raider, and while I’d like the other modes to appear in a better way, they simply won’t be missed thanks to New Game+ and being able to revisit tombs (in a future update). What stays is the grotesque deaths for Lara Croft if you miss a timed sequence. There’s almost nothing that I can complain about when it comes to this game. There are a few anti-climactic antagonist deaths that should have had a bit more focus, as well as fleshing out the bad guys. But all-in-all, the pacing, direction, and overall presentation of the game is the best yet. 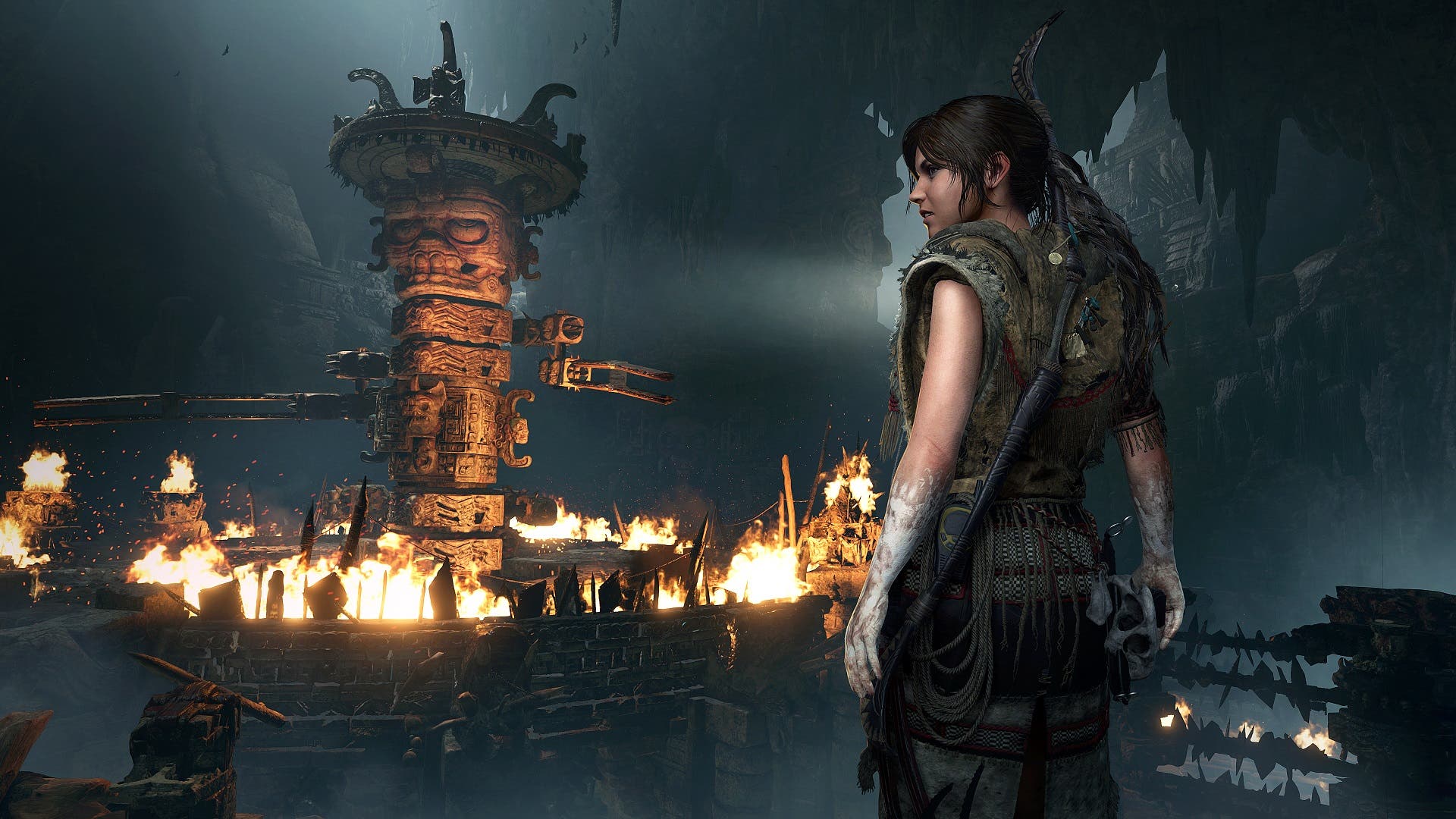 Somehow, Shadow of the Tomb Raider manages to look and feel like Tomb Raider II. I’m not entirely sure if it’s the architecture or what, but this game has an air of nostalgia with its densely packed visual design. There’s an incredible amount of detail in every area you explore, whether it is outdoor or indoors. These environments evoke the old Tomb Raider games in ways I wasn’t expecting, while still forming an identity of its own. While I played both the Xbox One X and PC versions of the game, they are so close visually, that you can’t lose with any version of the game you own.

On Xbox One X, the image quality and density is absolutely absurd when viewing it in 4K and HDR. You do have the choice of selecting High Resolution (4K @ 30fps) or High Framerate (1080p @ 60fps). No matter which mode you choose, everything you see is incredibly gorgeous. The sweeping outdoor vistas, time of day, indoor tombs, and underwater sequences are an incredible sight. It should come at no surprise that there’s a Photo Mode included with this game, and for good reason. You will want to take photos, and often. 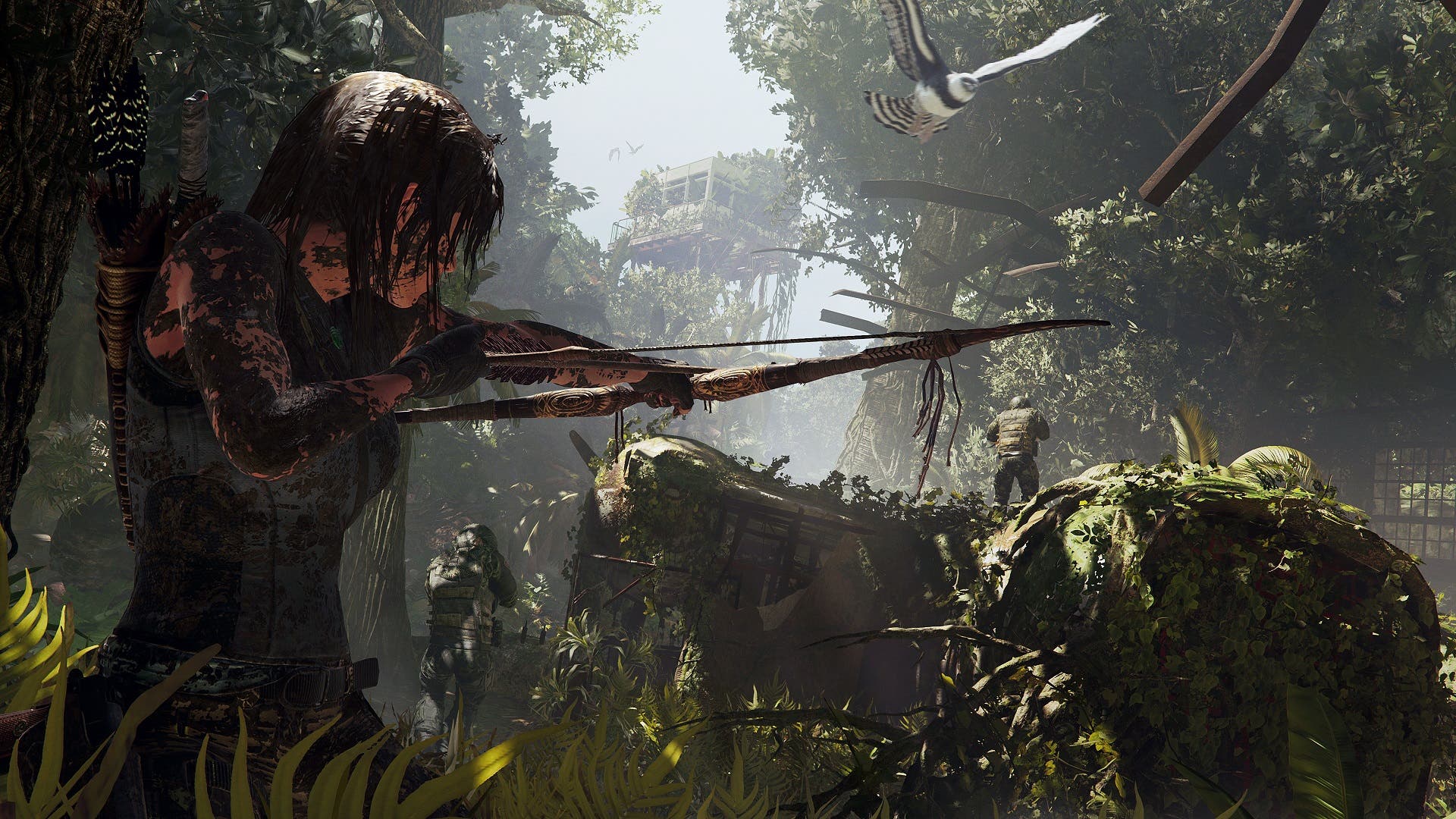 On PC, I don’t have an RTX video card for ray tracing, but my GTX 1080 held up really well. What I played wasn’t the optimized build, but was the final review build. It was missing some features, such as the in-game benchmark which has been a standard for Square Enix games for years. It does have a really neat feature that the Xbox One doesn’t, NVIDIA Highlights. The game will capture a short video based on certain events, and actions. This is a great way to automate highlighting your cool moments without having to continuously record. The PC version is runs really well, and will be a benchmark showpiece for years to come. 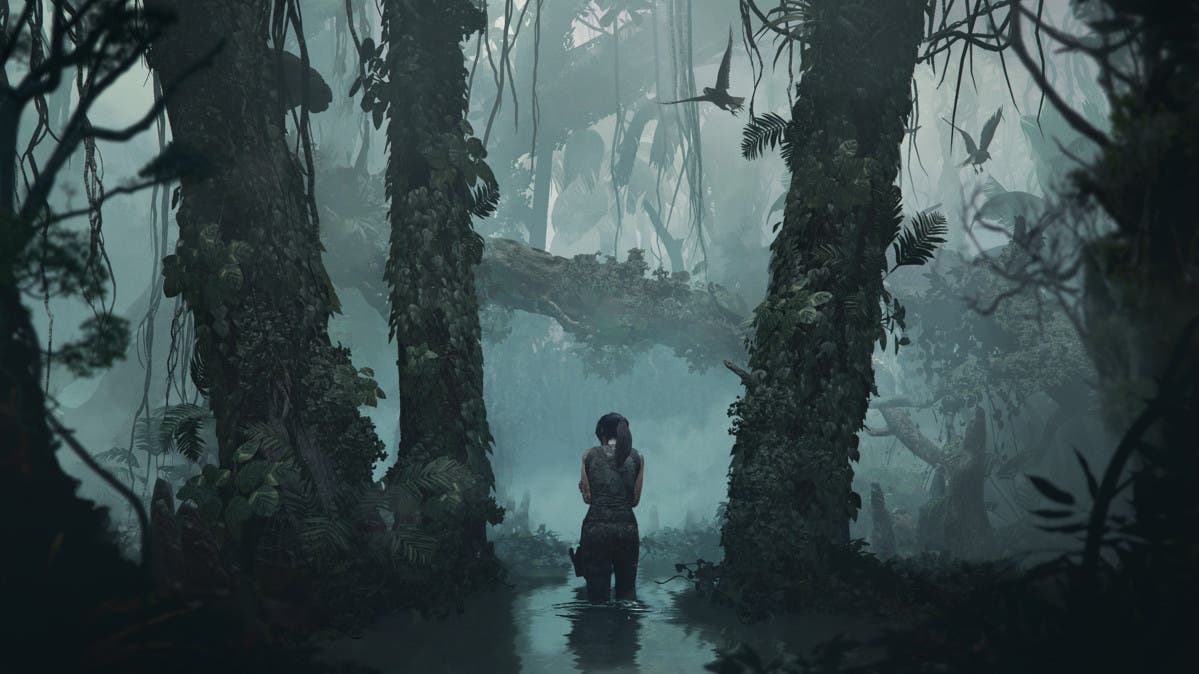 Shadow of the Tomb Raider is excellent, and so well balanced; from the combat, to exploring, to solving puzzles. It’s rare to have this balance that even the final boss is evenly constructed, and no difficulty spikes are present at any point during the game. Shadow of the Tomb Raider is constantly challenging Lara, forcing her to survive another harsh location. There are so many great moments, but the stealth is fantastic and so satisfying. With more tombs, more ways to explore and connect with the game world, and less of the junk that soiled prior entries, it’s everything you’d want. This final chapter in Lara Croft’s origin story comes to a close with maturity in tune with the character and the series. Shadow of the Tomb Raider is the quintessential action adventure, compounded by human emotion tying it all together to be at the top of its class.