Imagine growing up in the 90s where games like Doom, Hexen, and Wolfenstein introduced the world to the first-person shooter landscape, but you were too young to remember it? Well, that’s where Jakub Cislo of Buckshot Software comes in. Project Warlock is a recollection of those early 90s games for him, in style and art, but with modern lighting, effects, and conveniences. The result is a proper first-person shooter befitting the genre so well, even incorporating RPG elements. Project Warlock captures the nostalgia but without the pain of trying to get an old game to run properly. If the main menu music is any indication, this one man developer knows what made the original FPS games engage the player from its first moments. You play as The Lone Warlock, his origins are mysterious by design, and the game focuses a purposeful amount of time on gameplay instead. Taking place across five episodes which consist of five levels with anywhere from two to four stages each. The lexicon that this game uses, it’s just classic and evokes all the right emotions. In total, there are over sixty levels, with each episode taking in a different biome, from dungeons to Antarctica to Egypt to industrial places.

Getting through a stage is generally fast, anywhere depending. In classic first-person style, you’ll have to collect red, yellow, and blue-colored keys to gain access to other parts of the level, to be able to finish it. And what would a stage be without secrets to be found. There’s tons of nooks and crannies to find that hold extra treasures to acquire. While the game clearly tries to emulate the 90s in almost every way, it does omit some things that I appreciate. My favorite omission from the genre in this game is that there’s no par time for completing a level. I’ve never been a speedrunner type, but removing the shaming of not beating a level in the “desired” time is something I can get behind. 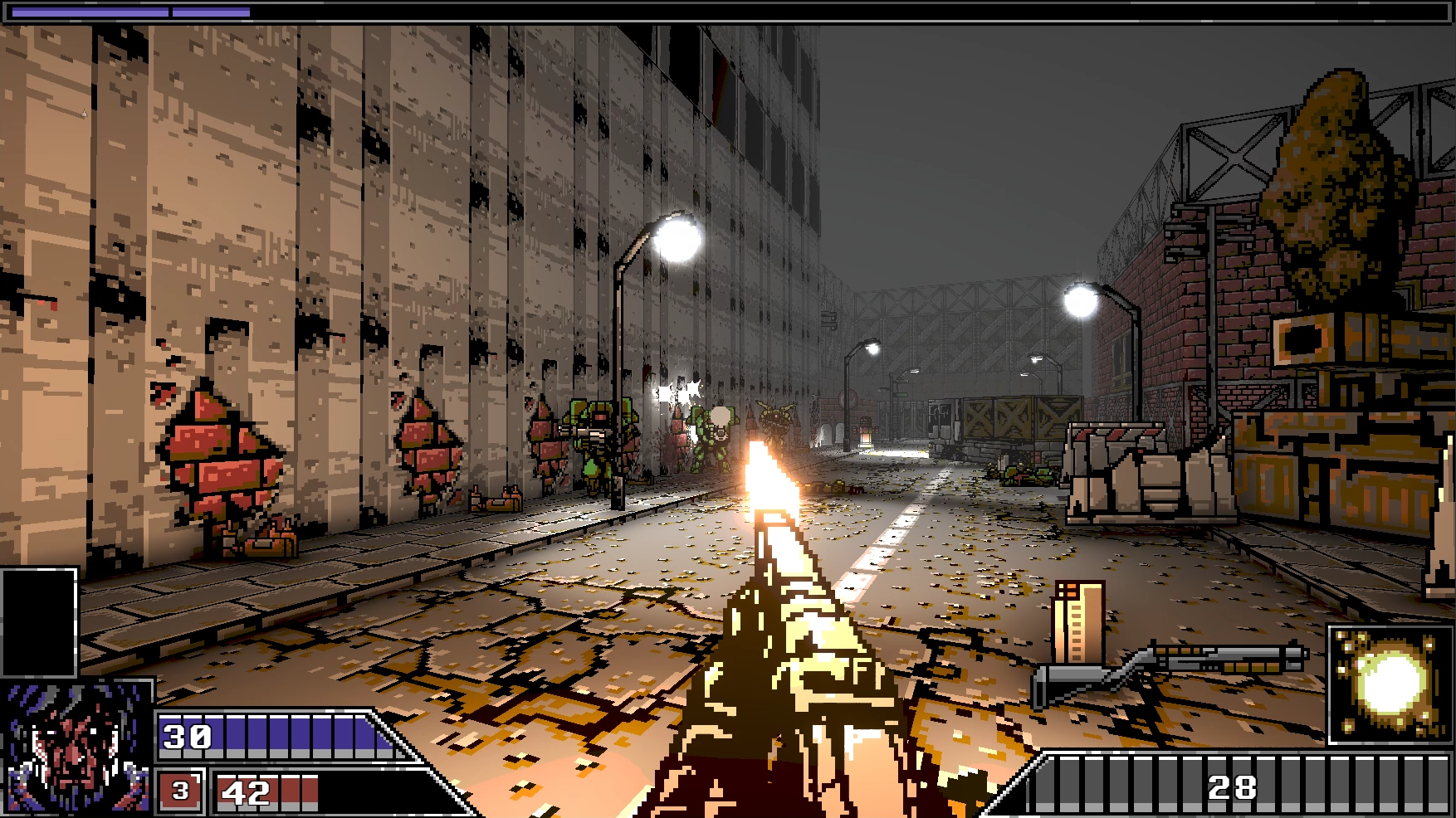 The weapons of Project Warlock span from standard fare to surprising. You have your pistols, shotguns, uzis, and so on. But then you have a magical throwing knife, an axe for melee, and even hurling magic spells like you’re in Hexen. There are a lot of weapons in this game, and can take different forms as there are means to upgrade them. I have to say, some sound effects need work. Weapons that have a high of fire “pop” my speakers or headphones in the most unpleasant manner. It never got to the point of hurting my ears, but it just never was fun to listen to.

While I reviewed a mostly final version, there were some minor bugs I ran into. Sometimes the game would lock up for no good reason. But the most egregious of problems is when I’d be mostly done with a level, and I’d go back to make sure I got all the places where secrets would be, I’d fall through the world forcing a restart. These issues are far and few between, but happened enough over the course of the game to warrant a warning. I’m sure these issues are to be fixed at or just after release. But as it stands, is a caution. 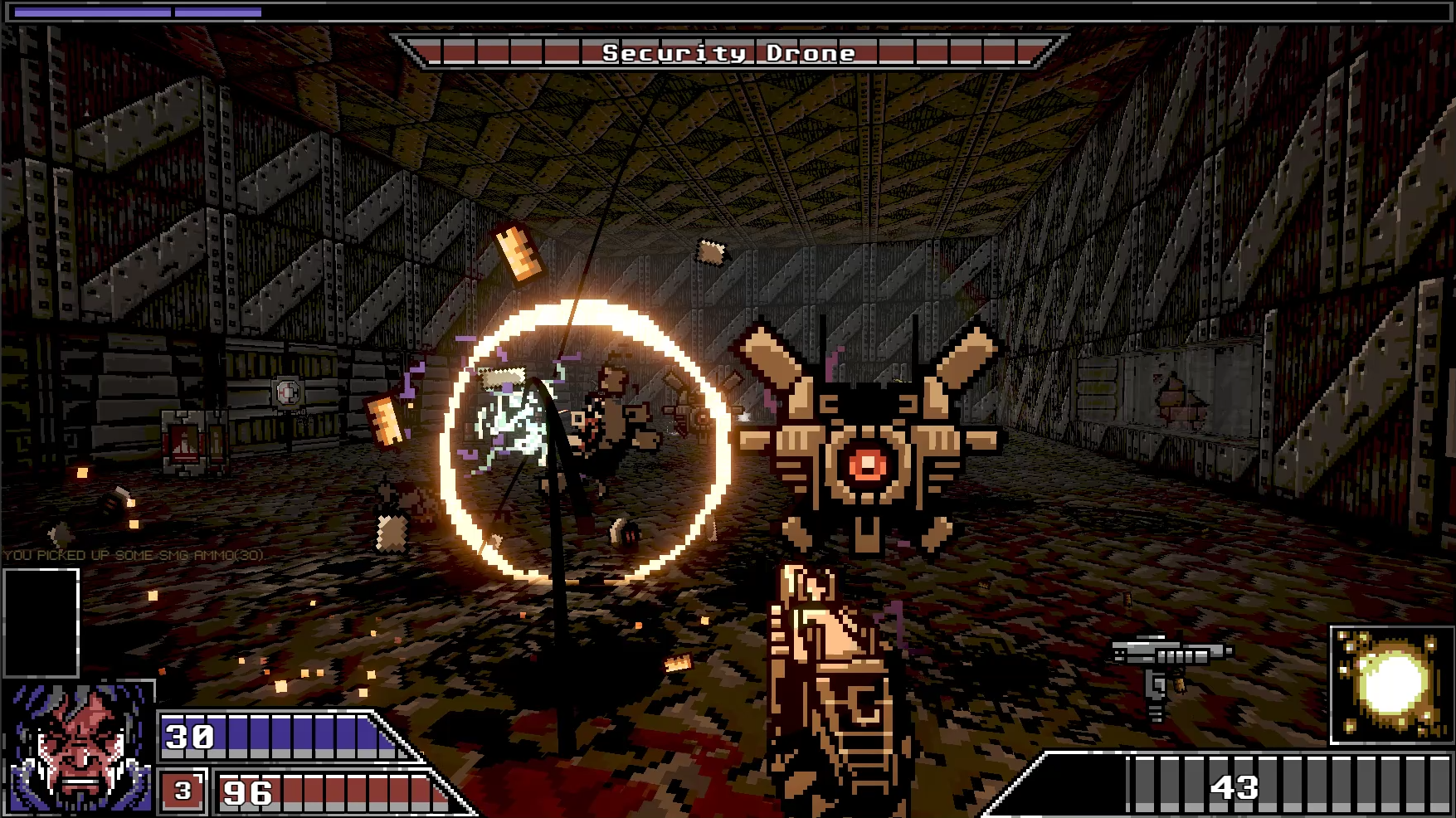 There are times where old school conflicts with new school. There’s no manual saving or quicksaving, but I understand the reasons why, as this would make the game too easy. And like classic games, there’s no jumping or reloading. What I love about the new school is when you walk through a dark corridor and get webs on your face that take a few seconds to clear. Each episode even offers a different visual look for items like health and mana. Project Warlock is so clever, almost at every turn.

There are RPG elements to Project Warlock, furthering its modern sensibilities. You’ll earn experience by collecting items with bonus XP, but also for things you do. You’ll also receive upgrade points that can be spent on weapon upgrades, or for buying spells. Spells are gathered by finding spellbooks within a level, and weapon upgrades offer permutations on the weapons you’re already using. Weapon upgrades are an “or” type, meaning you have two options to choose from, and only one can be chosen as a permanent choice. The pistol is fine on its own, but an upgrade can turn it into a flare gun which lights enemies on fire, or a magnum which has a slower rate of fire, but does more damage. You lastly can spend points on enhancing your character’s proficiency in strength, life, spirit, capacity. There’s a hub at the end of each level in which you can spend you hard-earned experience and points. The leveling systems are really well implemented, and aside from gaining new weapons, you feel more naturally powerful as you progress through the game’s increasing challenge.

Project Warlock has modern twists on vintage look. It does things that the original idTech engine couldn’t have done. For instance, the whole game has light sources from torches on walls to the shots from your weapons light up the dark. The game is visually busy, and is sometimes to its detriment. The game supports a maximum resolution of 1920×1080. And I have a monitor that does 2560×1440. I hope there’s support for larger resolutions soon. The game has a distinct look despite wearing its influences on its sleeve. The large sprites remind me of Chex Quest for some reason. It’s a game that nails its look and uses the Unity engine to provide necessary improvements.

I adore all of the visual options provides. It wasn’t enough that the game looked like Doom in a modern game engine. But you also get additional visual options in the game. You can enable a retro shader so that you alter the game’s color palettes. There’s options like GameBoy, the Commodore 64, and even ZX Spectrum to get a very distinct look out of Project Warlock. Then there’s the way you can turn on a CRT, LCD, or a custom filter of your own making. The implementation here is so well done, and I love making tweaks to it. My favorite was cranking the saturation up, the colors really popped with this set to the maximum.

Project Warlock is an excellent shooter on its own, but Buckshot Software figured out how match the feeling of playing those classic first-person shooters, but now with a proper lighting engine for an improved atmosphere and gameplay experience. There’s a ton of weapons and upgrades to experiment with, enemies are unique to the episode in which they exist, everything is visually distinct from one another, and the game’s full of little to big details that you can’t help but appreciate. Project Warlock is a game that can be considered instant classic.

A pre-release GOG code was provided by the GOG.com for review purposes