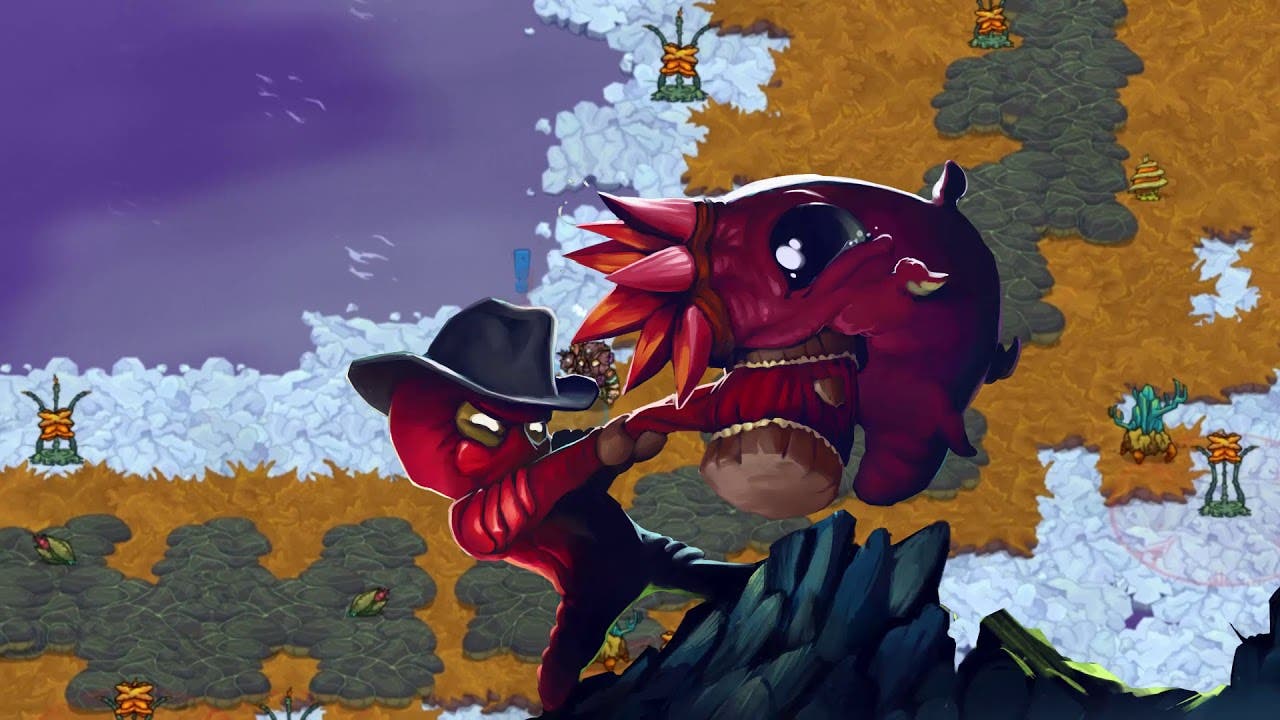 St. Louis, MO – Nov. 8, 2018 – Crashlands, the crafting-adventure with RPG elements and more than 500,000 players from Butterscotch Shenanigans, touches down on Nintendo Switch today alongside a new couch co-op mode. This new mode also launches on Steam today via a free update.

If Crashlands has a lesson to offer, let it be to never come between an intergalactic trucker and her deliveries. When Flux and her trusty robot assistant Juicebox encounter a villainous alien named Hewgodooko that steals their ship components, they hurtle towards the wild planet known as Woanope. Now she’s going to show ol’ Hewgo that he messed with the wrong trucker as she starts from scratch, lives off the land, finds all of her missing packages, builds ridiculous weapons…and maybe saves the galaxy if you want to be alldramatic about it.

Stranded on a foreign land with nothing but scraps from her aircraft and the indigenous flora and fauna, Flux and Juicebox start from square one. But they won’t stay there long. Crashlands wants you to get to the good parts nice and quick. We know you just wanna chill out, kill aliens, harvest their bits, and build a house out of ‘em. With an auto-sorted, infinite inventory, the ability to teleport home at any time, and a building system as easy as finger-painting, you can do just that.

Anything on Flux’s path is a useful resource to build tools, structures, and weapons: baconweed restores her health, weird-shaped trees may become part of a sawmill and a stolen egg can hatch into a disgustingly cute ally. If you’re lucky enough to have even one real-life friend, you can even bring them along for the ride: couch co-op allows a friend to play as Juicebox, helping with both combat and harvesting.

Get ready to craft tons of gear to defeat Woanope’s baddies – righteously slay the unassuming lifeforms while donning swords, hammers, axes and armor. Juicebox is incredibly creative when it comes time to work with the resources laying around. Who would’ve thought it was possible to construct a bomb that sets enemies ablaze with only some roots, grass and logtrees? When they aren’t burning to a painful crisp, watch enemies closely. Recognizing their telegraphed attacks can save Flux’s life.

Flux’s quest to deliver her packages, keep her Space Pension secure and maybe stop a megalomaniac foe from controlling the universe takes her across three huge biomes containing a 40+ hour Story Mode. You want NPCs, plenty of sidequests, and some very gross-looking bosses in the cutest hand-drawn style imagined? We gotchu. For the overachievers, there are two extra modes to spice things up: Creative and Hardcore. Players can even save their progress and continue the journey anywhere with cross-play on PC and mobile versions.

“Crashlands was the fun escape my brothers and I found during my battle with cancer,” said Sam Coster, co-founder, Butterscotch Shenanigans “We want the co-op debut on Switch to bring friends and family closer together like it did for us.”