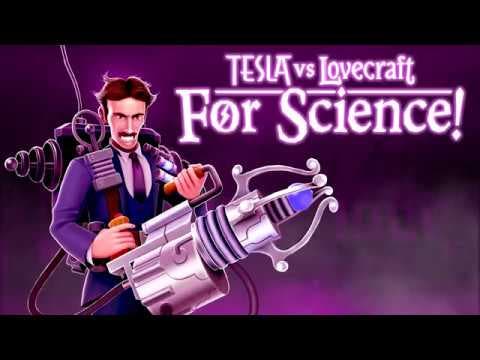 Tampere, Finland, November 8th 2018 – Tesla vs Lovecraft, tentacle splitting top-down shooter from Finnish indie developer 10tons Ltd., is getting a brand new DLC. The DLC is called “For Science!” and it will be available first on Steam early December 2018. The base price is USD/EUR 4.99 Other platforms will follow later.

”This DLC is a must-have for all who take their fishmen-slaying seriously. The DLC expands the game in countless ways. The exact details are in the feature list below, but my favourite is the endless mode and the new perks. Go wishlist the DLC to get a notification e-mail on the release! You can also sign up for the Tesla vs Lovecraft mailing list – we will randomly draw a few testers for the DLC there in the coming days.” says Olli Alatalo, the designer of Tesla vs Lovecraft.

In Tesla vs Lovecraft, the player assumes the role of the cult famous inventor Nikola Tesla fighting waves and waves of monsters summoned by horror author H.P. Lovecraft. The player gets to use ingenious gadgets like the Quantum Teleport backpack, which allows teleporting a short distance even through solid matter. The highlight of the game is the Tesla-Mech battle robot, which provides a massive but temporary boost in firepower. A full arsenal of conventional and sci-fi weapons, powerups, special abilities, and selectable perks is also present.