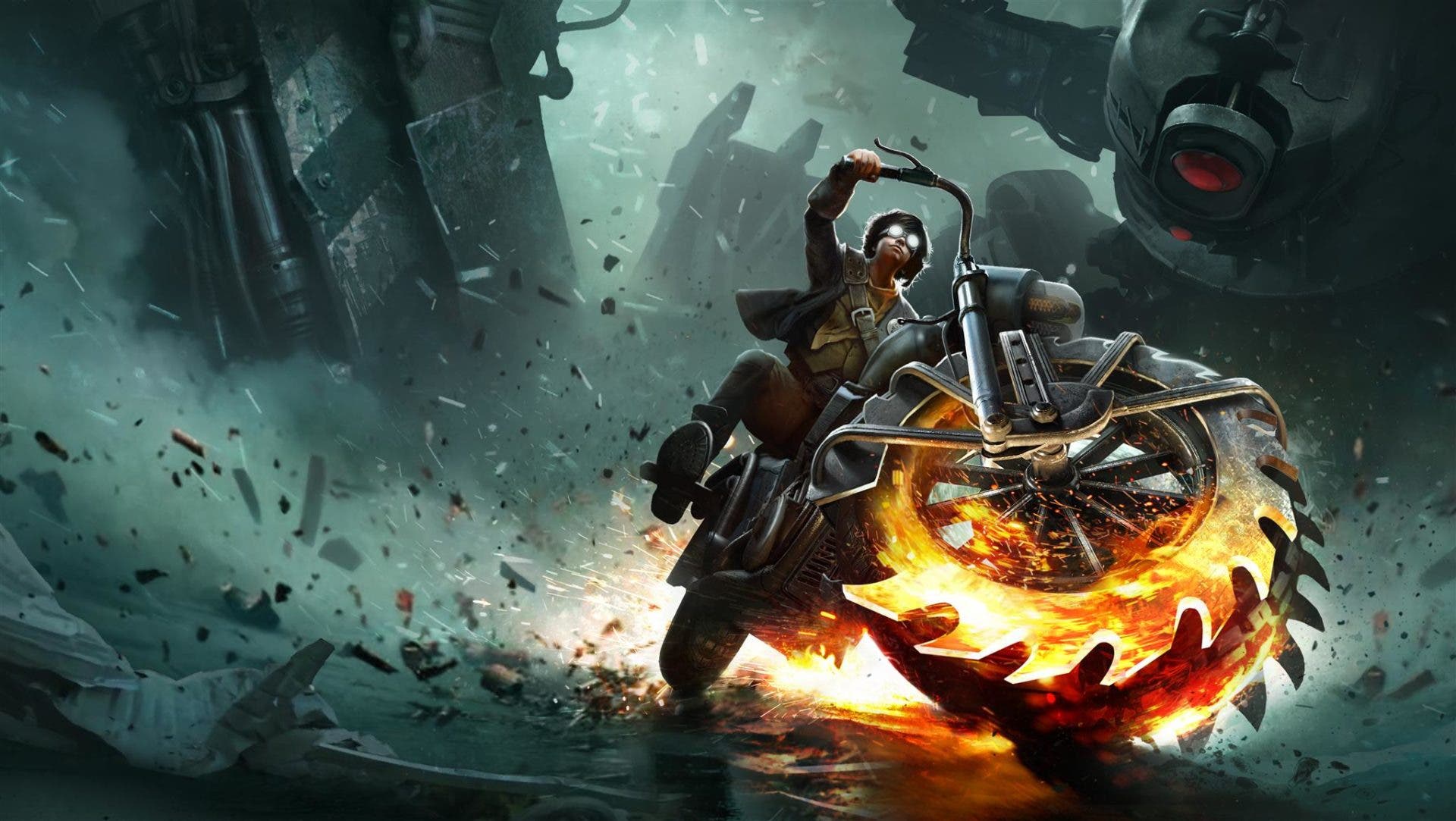 Steel Rats is a unique that blends action and racing in a surprisingly unique way. It’s a game that doesn’t overstay its welcome, and while Steel Rats may not seem like much at first glance, but you’ll quickly learn how distinct its systems are from other games in the genre. Steel Rats has a lot of challenge, but at a frustrating level that becomes hard to deal with. It never becomes so much that you won’t see it through, but only few will want to revisit past levels to collect everything, and find every secret. Taking place in the fictional Coastal City, during an alternate 1940s United States, resides a motorcycle gang known as Steel Rats, a group of do-gooders. You’ll have the choice of playing as any of four characters who make-up the Steel Rats. You can switch to them at any time, and feature unique attributes like health, energy, bike capabilities, and weapons. First, there’s Toshi, the teenage genius who is the group’s go-to on all things technical. Next, is James, the gang’s leader and headstrong personality. Then, there’s Randall who’s pretty much royalty. And finally, Lisa, the fastest character in the game rounds out the bunch. Despite each character having unique abilities, you won’t ever need a specific one to complete a level, but you will become attached to certain ones to complete levels.

Steel Rats starts with a prologue, leading into the game’s four chapters, and an epilogue to cap things off. It takes roughly six hours to complete, and is a solid adventure from start to finish. Each chapter takes place in a different section of the city, with its own challenges and means of navigation. Steel Rats has environments full of mystery and history, begging to be explored to their fullest. And even if you don’t spend much time during any given level, there’s a visual splendor that you’ll still be able to take in. And I’d be remiss if I didn’t mention the great industrial noises from grinding your wheelsaw on pipes, or just the skittering mechanics of the enemies themselves, it just sounds awesome. 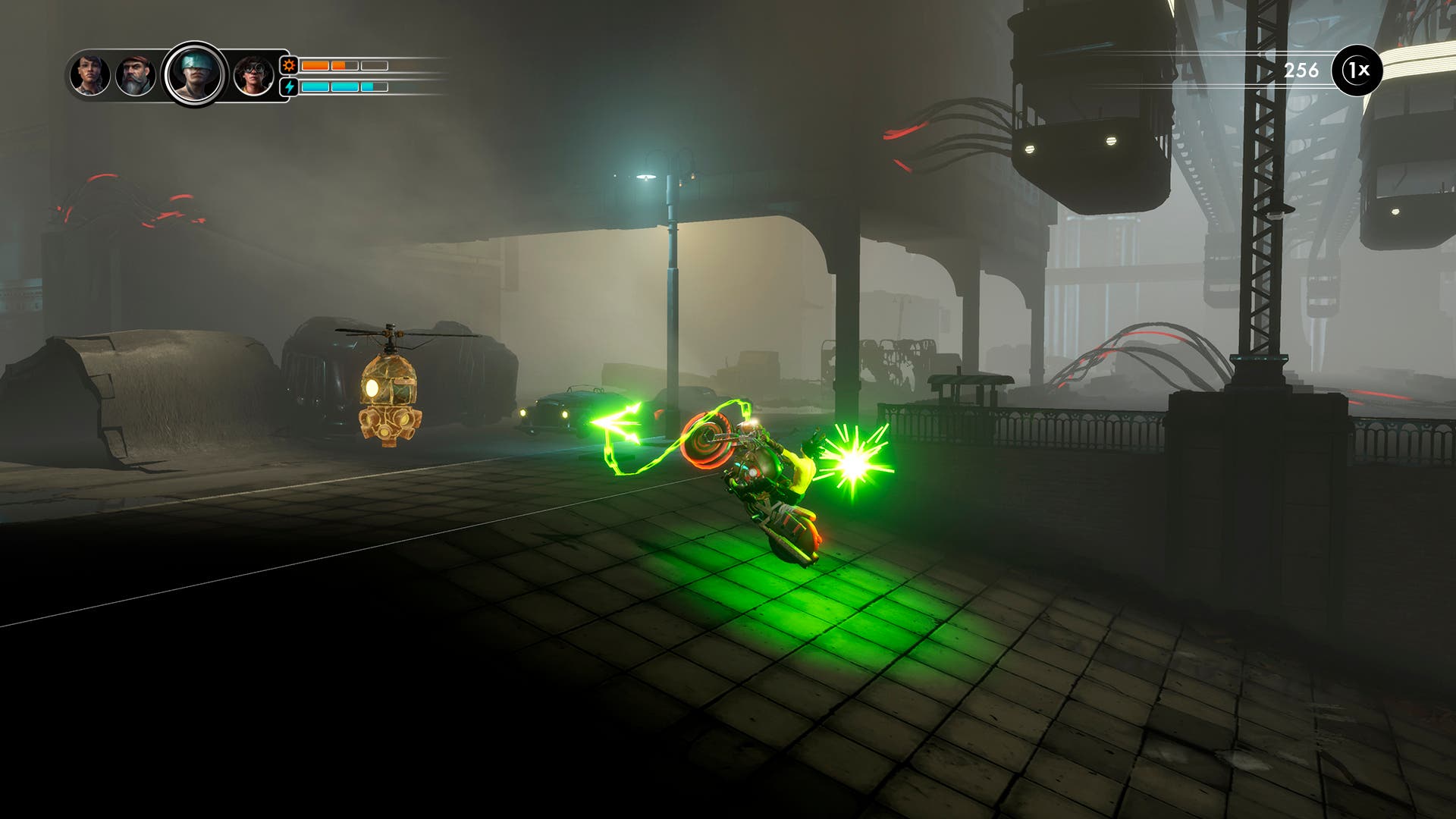 Combat in Steel Rats is all done from your motorcycle. Each character can spin-up their front wheel which doubles as a hot sawblade that’s ready to cut through metal with ease. The wheelsaw also lets you climb pipes, and even offers a small boost to normal cruising speeds. You can also charge up a boost which will propel you in whichever direction you face. A defensive spin will deflect enemy shots, and do some serious damage. The main enemy you’ll encounter are Junkbots, they come in different forms and sizes, and absolutely fill the screen. Defeating an enemy is intuitive, but boss battles are where they really shrine and you’re put to the test.

Timing your attacks and stringing them together will earn you a combo score which feeds into your final score at the end of a level. There’s a certain level of acrobatics which generate points as well. Navigation in these levels is really interesting, as there are two planes to drive on, and becomes essential in later levels when traversing them or risk falling to your death. Each level features objectives that will let you earn bonus points, which asks you to complete the level in a certain time, kill a number of enemies, or collect the right number of scrap to complete. Steel Rats is not what I would call a difficult game, but it can be infuriating to be fighting the controls, which can be at odds with itself and the levels as well. It’s clear that some levels are designed better than others. There was certainly some user-error when it came to them, as it requires active knowledge of what abilities you have. For instance, I had issues navigating certain areas because I forgot I could jump, and led to being frustrating due to my own forgetfulness. There’s some demanding and precise platforming, so awareness of your placement on-screen is necessary.

Until a recent patch, Steel Rats was very generous with the currency you would earn, which feels much more balanced now. The points you earn from scrap can be spent on upgrades on each individual character, and skins. Earning more will ask you to revisit prior levels to find secret areas which will teach you more about the world, or re-watching cutscenes. Steel Rats sets itself up for a sequel, while concluding this game in a satisfying way. Tate Multimedia’s wreck and ride platformer is something special, even though it made me mad and wasn’t that memorable. Steel Rats is rather unique on the whole, and stands out against everything else in the genre – whether it be platforming, action, or racing. Steel Rats has replayability, detail, and general cleverness in its world, design, and presentation that’s worth checking out at some point. It’s just a shame that it the controls and navigation become the biggest adversary.