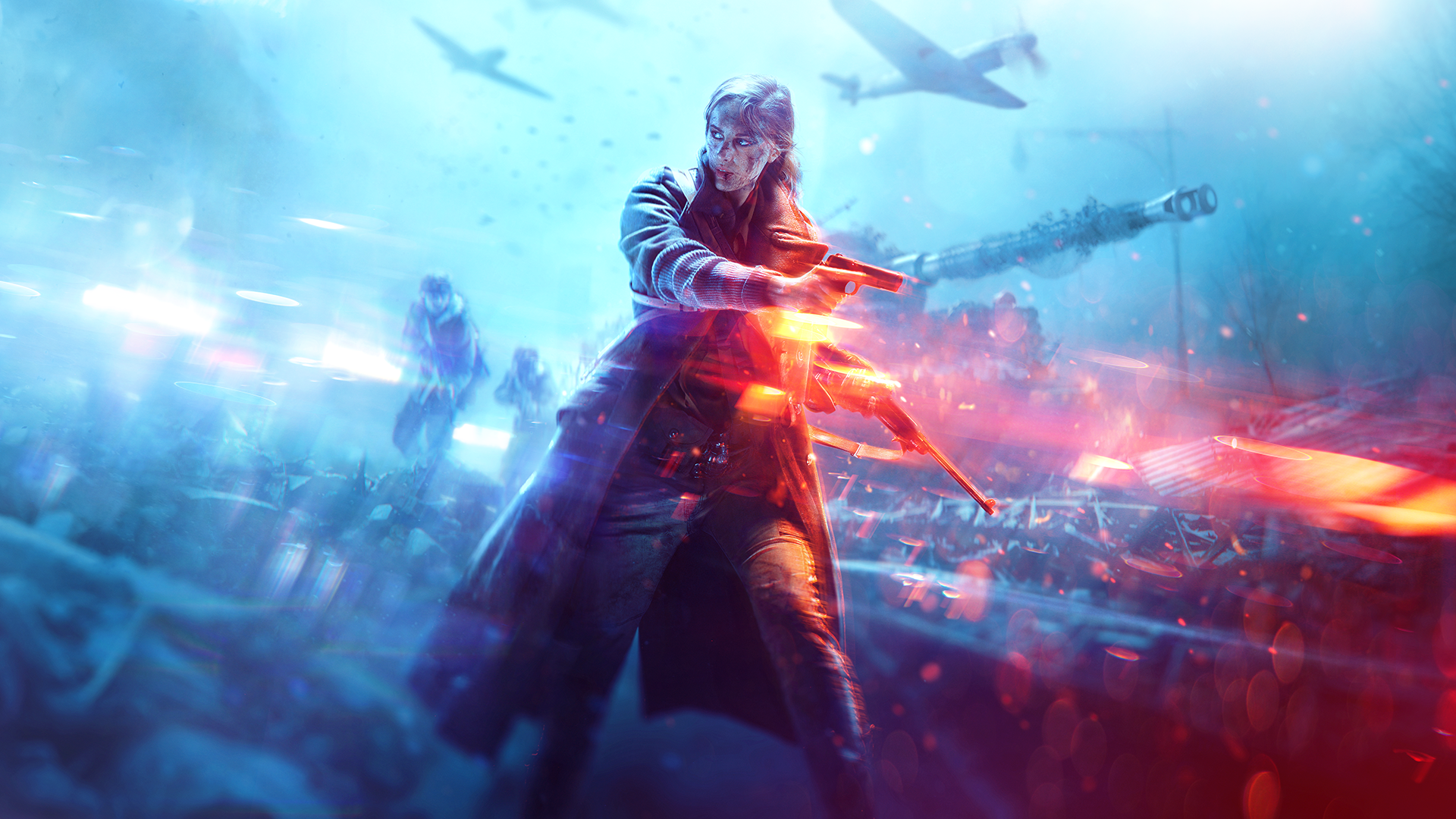 DICE returns to World War II with Battlefield V, which is a follow-up to Battlefield 1, and takes place before Battlefield 2, Battlefield 3, and Battlefield 4. Number order confusion aside, Battlefield V is the best the series has felt in a long time. Clearly the lessons learned from Battlefield 1 have come to Battlefield V in a big way, allowing you to see the improvements to the systems and mechanics that make it feel so good. With the Frostbite engine powering this thing, World War II never looked so good. Between an somewhat confusing single-player approach, and the excellent multiplayer, Battlefield V approaches war with a sense of appreciation and historical representation that we haven’t seen before. 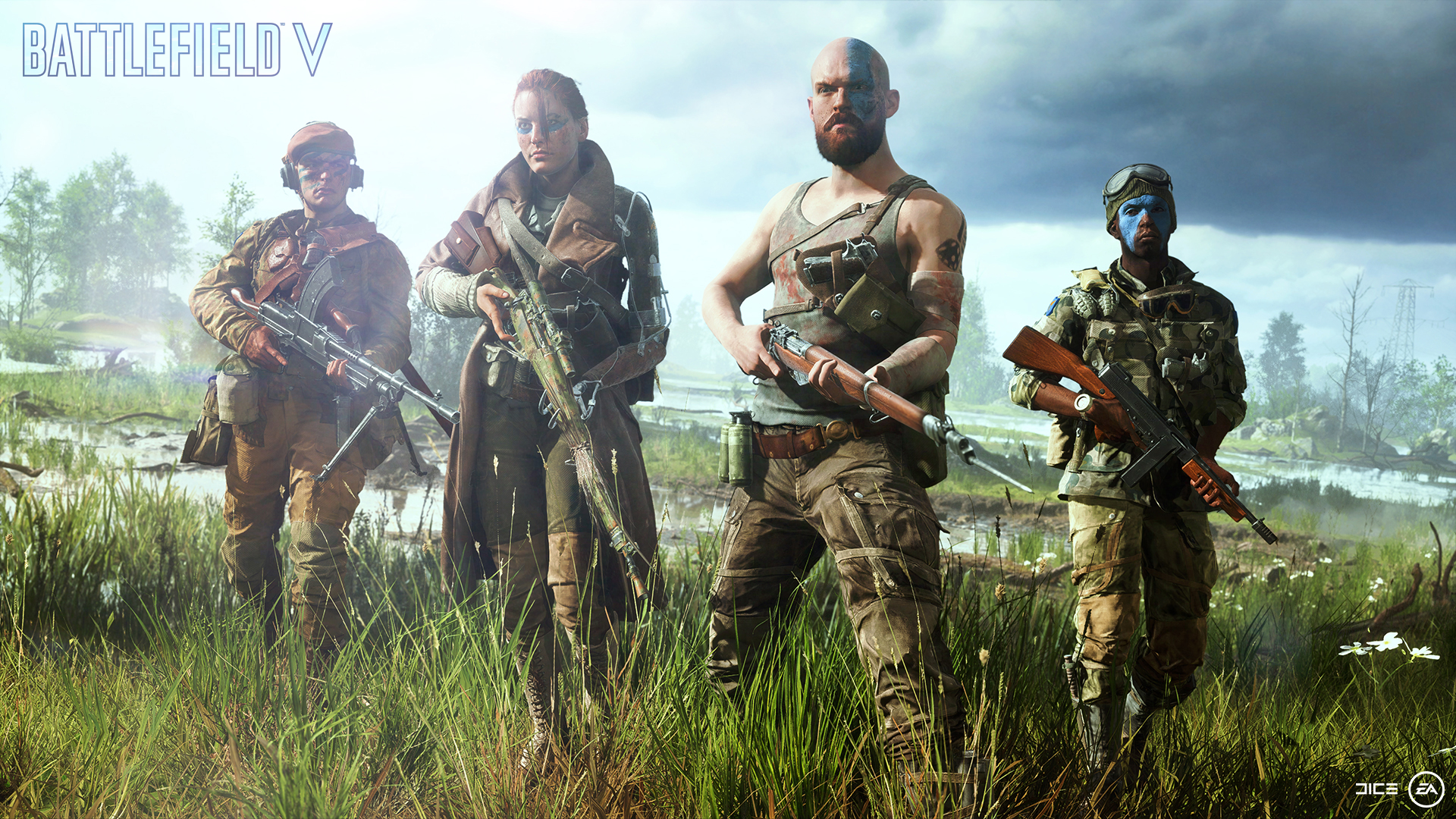 The intro mission gives you a variety of things to do at a breakneck pace, capturing the feeling of playing Battlefield, but this is the only instance where this happens. War Stories has four difficulties: easy, medium, hard, and hardcore – allowing the game to be as much or as little challenging as you want it to be. There are three chapters of War Stories currently, with the fourth arriving this month. The approach with the single-player campaign is one where it is treated with dignity and honor the way Call of Duty used to with its World War II epics.

Each chapter takes about an hour each, with multiple episodes within. You can complete the chapter, but also can find collectibles which provide unlocks in multiplayer. This is a great way of encouraging those who don’t typically play the single-player with a reason to do so. The chapters of War Stories tend to focus on stealth, which, is a bit strange for Battlefield when it’s about bombast. All in all, the change in pace is actually fun to attempt, if not incredibly tense. If you do fail to be quiet, you can fight your way out of it. If you’ve never dived into the campaign of a Battlefield before, Battlefield V‘s is definitely worth the short amount of time you’ll invest. 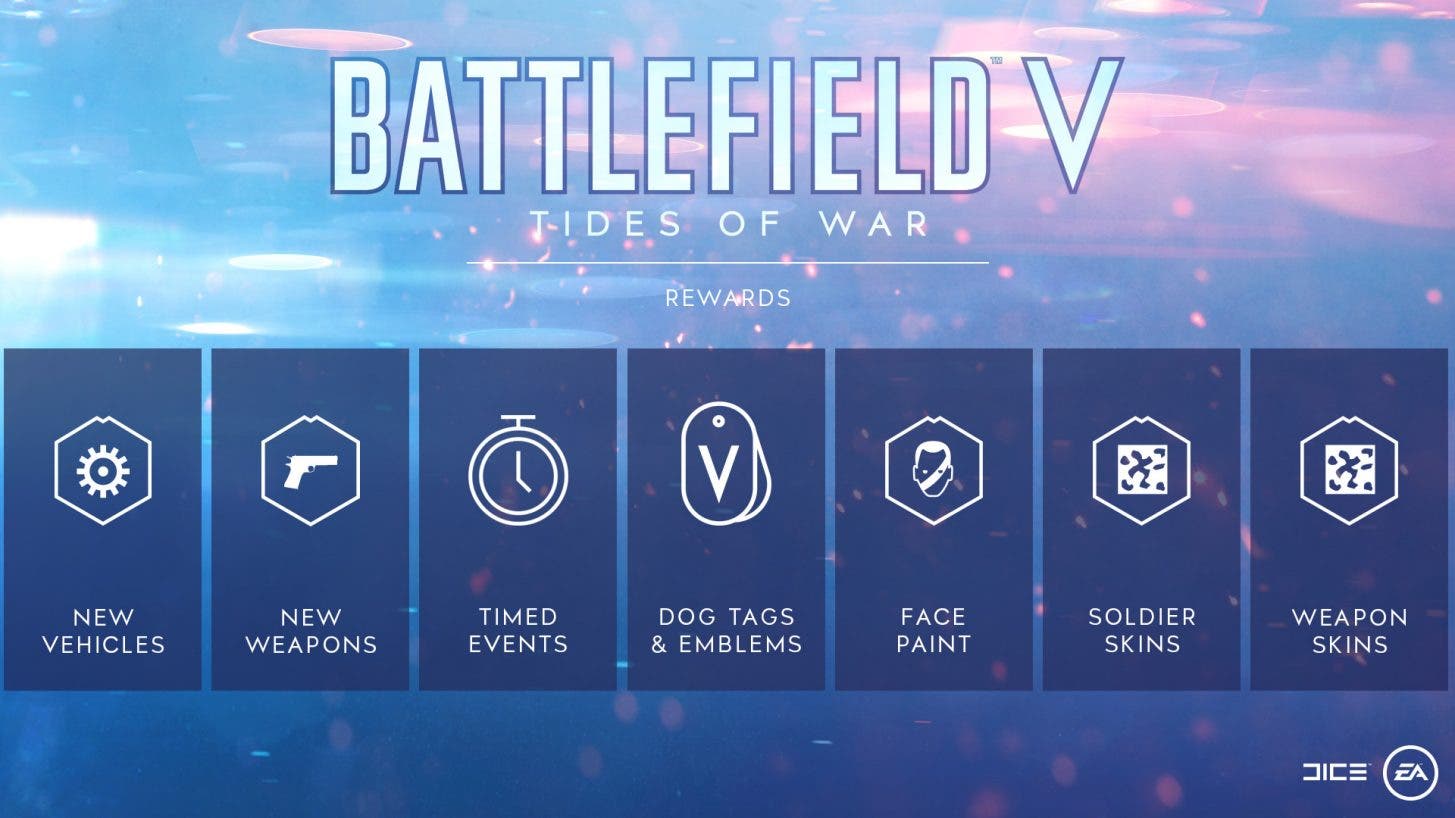 Battlefield V‘s existing maps and modes don’t end there. Tides of War takes the place of a Premium Pass this year, in the form of free updates consisting of weapons, maps, and modes without paying more than you already did to own the game. There will also be rewards for continuing to play the game. DICE also has other modes coming in future updates, such as a new War Stories chapter which will focus on tank warfare. There will also be a long-requested Practice/Firing Range that allows players to freely test out different loadouts and gear without affecting the match at hand.

Battlefield V has (since launch), eight maps and six modes of play. Upon previewing each, the game tells you how many minutes a match takes, as well as what maps are available and for how many players. This is really helpful at a glance. There’s a server browser that will let you filter things so that you join a game that meets your preference. The modes you would expect from a Battlefield game are: Conquest, Domination, and Team Deathmatch, which are standard fare. Frontlines sees the marriage of Rush and Conquest modes. Breakthrough asks that you breakthrough or defend sectors, requiring you to hold all nearby points to move on. Grand Operations has you and your team spending days attacking or defending, strung together maps and objectives. All-in-all, these tug of war matches in any mode always feel great to be a part of, and feels balanced throughout.

The maps of Battlefield V are extremely impressive. No map feels the same (even snow map to snow map), but it is missing some personality and charm. I’m surprised there’s no maps from Battlefield 1942, or at the very least, maps from major World War II battles. Clearly DICE wanted to stray as far away from the “tired” and “worn”, but it wouldn’t have hurt to see classic maps like Wake Island, Kharkov, or Stalingrad make their way into the game. Instead, there’s maps included for not well known battles. I will say, that the transformative maps are incredibly well done. One moment, you’re fighting in a city baked in sunlight, until the fog rolls in. This changes how far you’re able to see, which affects both sides of the conflict. Time of day changing over the course of a game also looks the part. 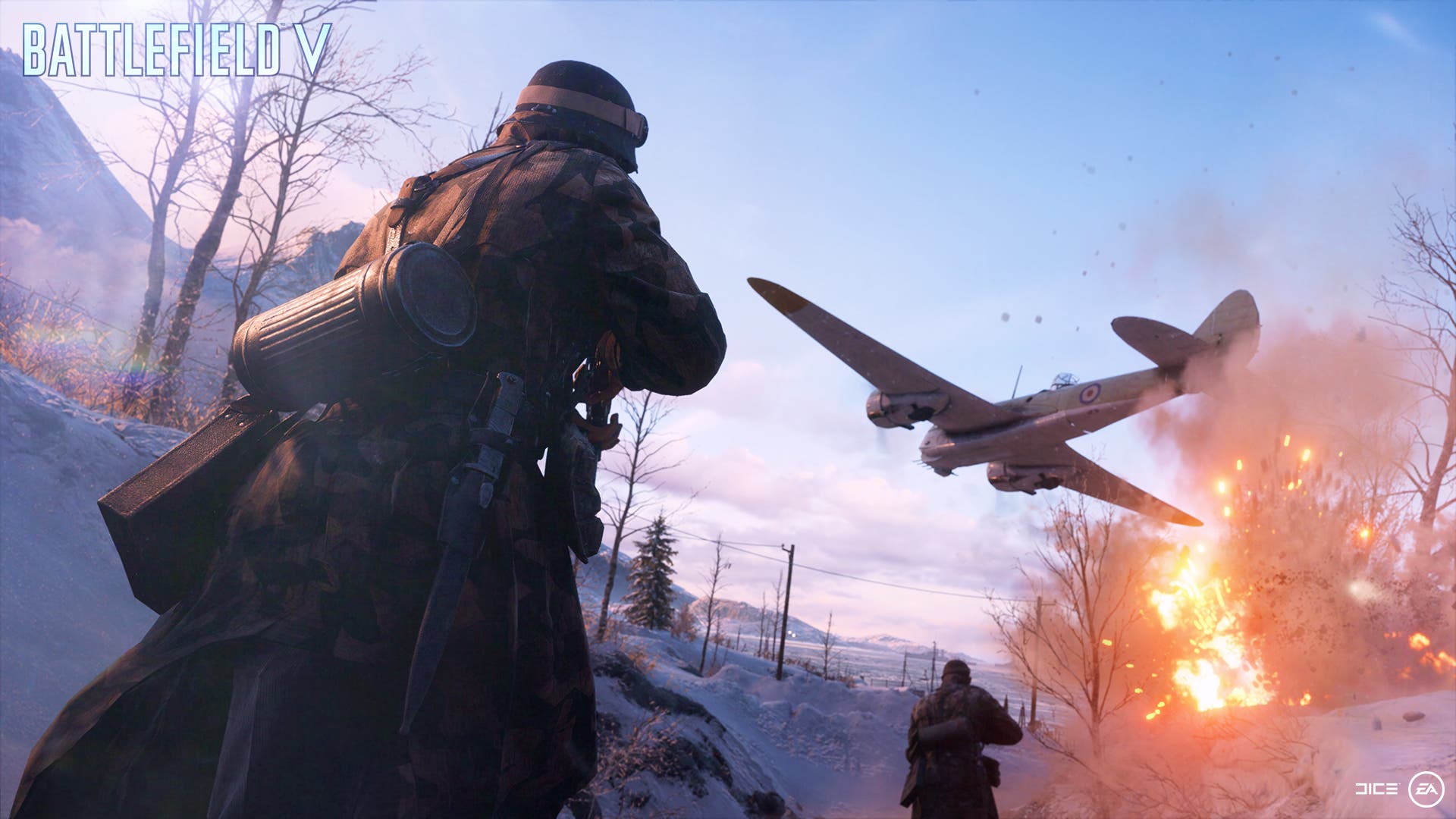 Battlefield V does a lot of cool things, but now the markers for hitting an enemy, getting a headshot, and securing a kill are more prominent. This system removes all doubt in scenarios where you swear you got a hit or a headshot, but question it. You can even customize the colors of these markers so you know what you’ve done, even though the base colors work well enough. Movement has been ever-improved with each DICE game. Now you can crawl on your back, and mantle high walls. If you’re on fire? You can drop to a prone and put yourself out, utilizing “stop, drop, and roll”.

There many notable changes for Battlefield V, but the revive and in parallel, the bleed-out systems see the biggest changes. For starters, any squad member can revive another squad member. And medics can revive anyone on the team. Anyone that’s not on the squad, and not a medic cannot revive. Having more revive opportunities extends pushes to capture points and wipe out other squads. All players have the ability to build fortifications on points that have been captured, by pressing T, you’ll pull out a hammer or sandbag and build up the area. You get a lot of points for building up areas. Some limitations are introduced, but focus on classes. For instance, only the recon class can spot by shooting enemies. Other classes can temporarily spot, as it places a 3D marker in the world. Support and Medic classes can only throw ammo and medicine, respectively only when they are within range of teammates. There’s also a cool-down to minimize the points you get for helping out the team.

Battlefield V features many weapons we’ve seen in other games, but I think this game in particular features weapons I’ve not seen in other World War II games. One weapon that really pops out is the M30 Drilling, a double-barrel shotgun that also has a single rifle bullet barrel for triple barrel blasting. Or the ZH-29, which can kill in two hits. Battlefield V fringes on the obscure, but there’s plenty of guns you’ll find familiar, and find to be your new favorites.

Often times, you’ll be placed as the squad leader. The squad leader earns points over the course of the match to spend on a Supply Drop, a Heavy Tank, a Half-track, or the top-tier item: Rockets. Depending on the situation, can turn the tide of battle. A rocket strike sends a message that one squad has been working hard. These moments feel earned, and no matter how you use the squad ability, you feel like it will lead to victory – even if it doesn’t. 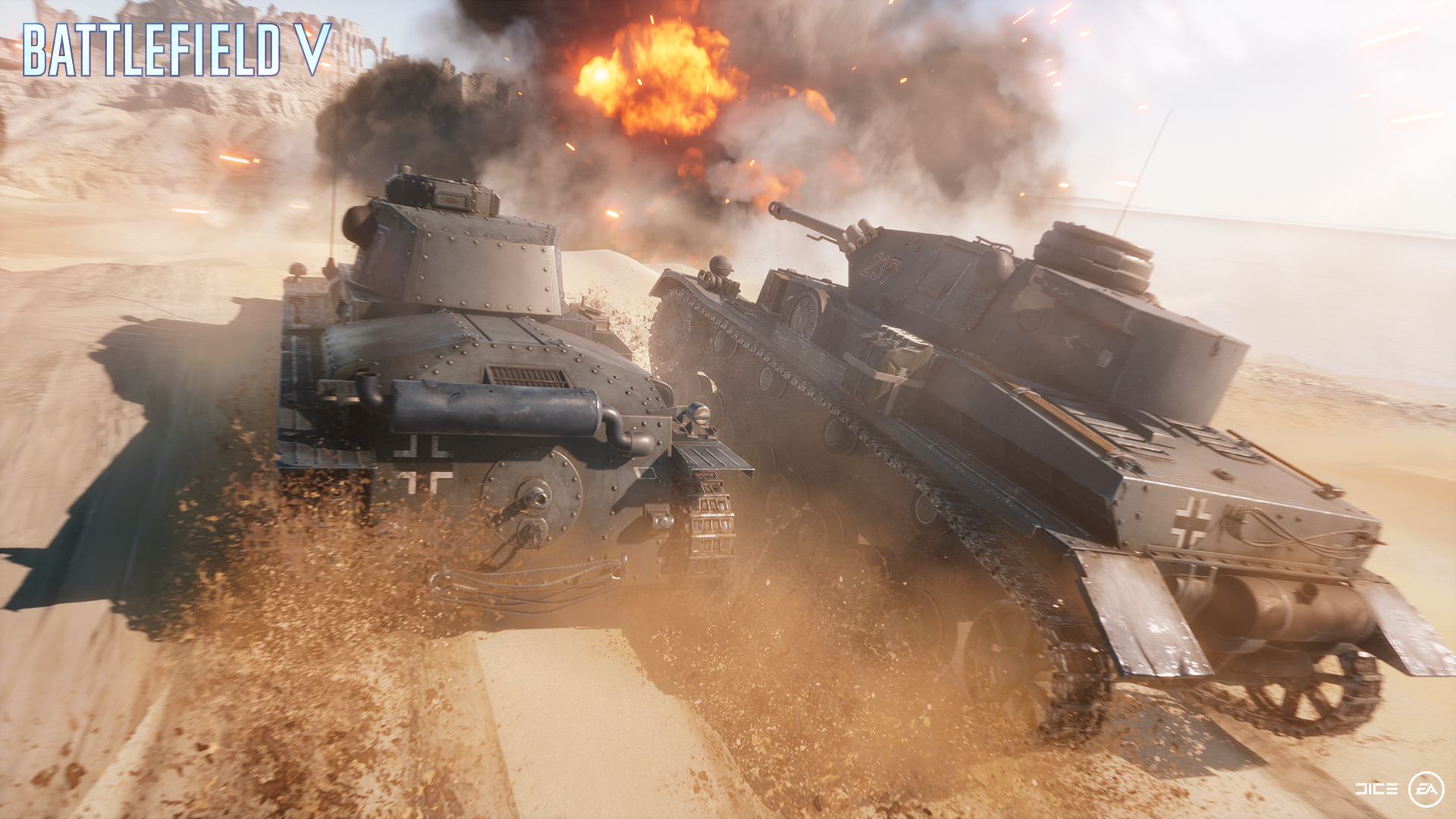 Battlefield V relies on specializations, or gun customization to allow you to tweak the weapons you use, to how you play the game. The specializations are well-rounded, but you’ll know what on the specialization tree matches your needs. Character progression happens thanks to following assignments and/or special orders. By taking on an assignment or special order, you are going to be working on a checklist of items to complete which will reward you with in-game currency to unlock upgrades.

In some ways, I feel like there’s too much visual customization. Both Axis and Allies have character customization, and individual unlocks that relies too heavily on the currency. This too goes for weapon skins as well. And with a somewhat uneven economy, feels like too much grinding to get basic unlocks. This can easily be tweaked, and most likely will. I could do without most of the visual customization, but it’s great that it’s there – though I would have preferred the systems of old Battlefields instead.

Battlefield V feels less like an experiment, and more of a refinement for the series to-date. It doesn’t have much in the way of environments that recall World War II. From its War Stories single-player to its robust multiplayer offering, this feels like a World War II movie with how the gameplay feels, the visuals look, and the sound punches. Battlefield V is a game that’s going to evolve over time, and as it stands, has the foundations of something great. I look forward to the improvements DICE will be putting into the game throughout its lifespan.